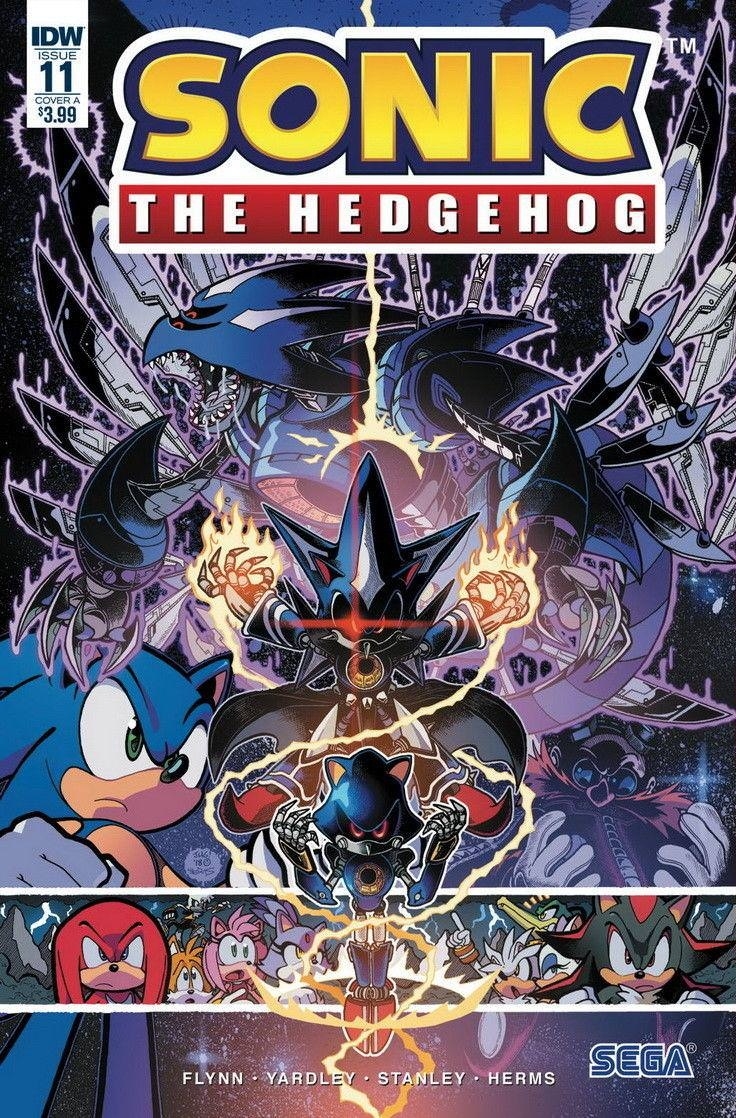 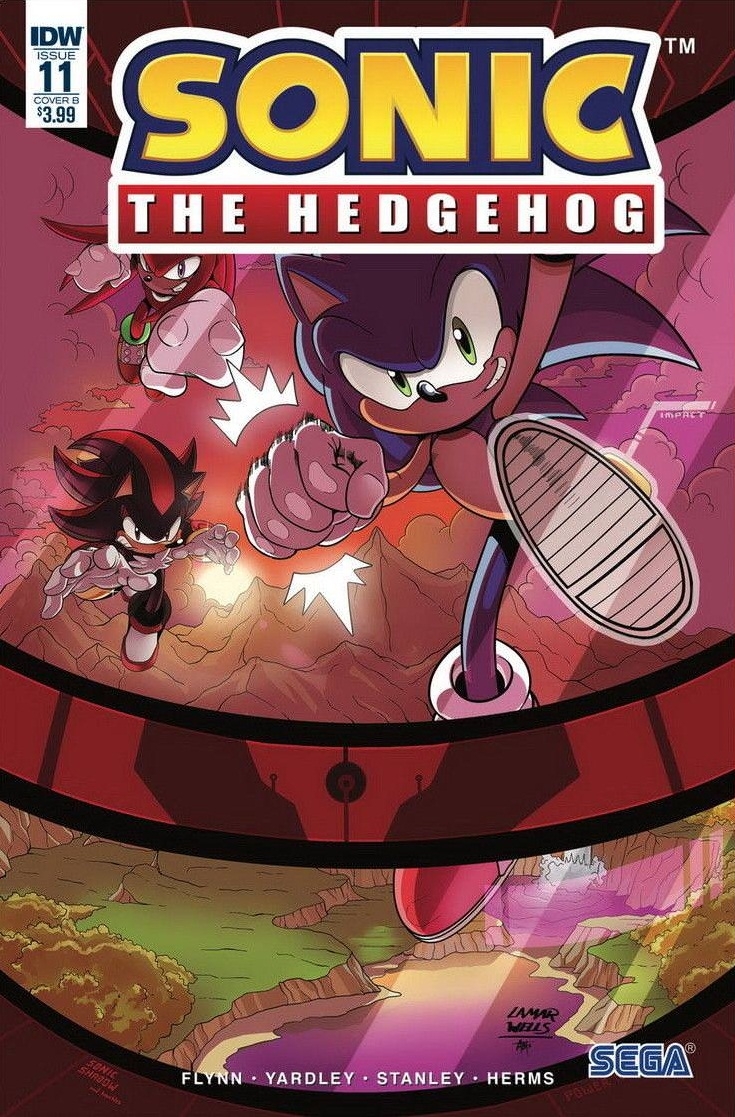 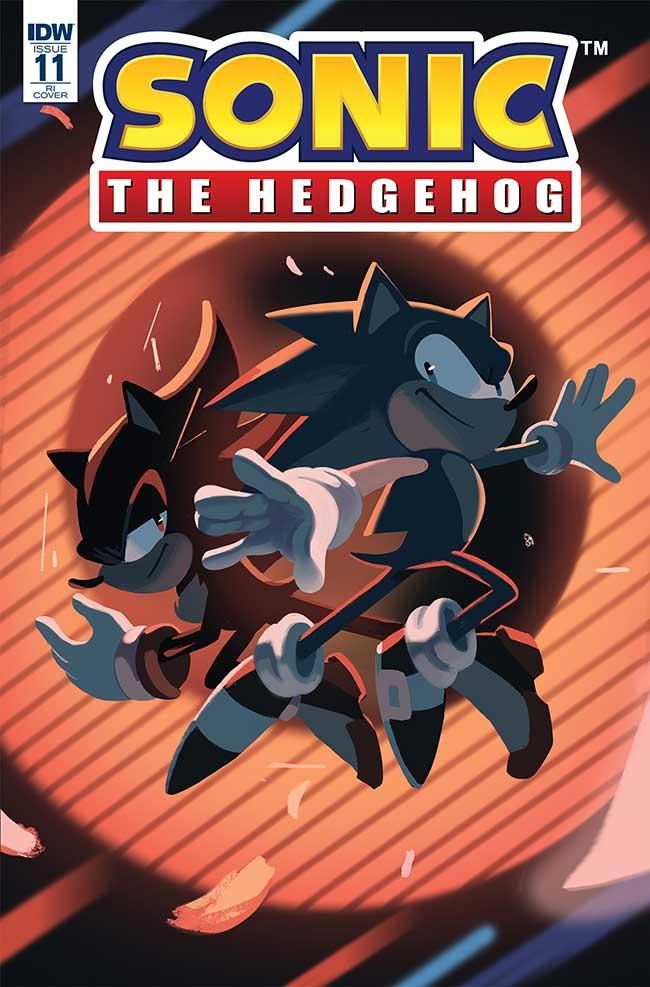 "The Battle for Angel Island," Part Three! Sonic and Knuckles are on the ropes as their foe uses the power of the Master Emerald to become a far more formidable threat! Meanwhile, the rest of the Resistance faces off against the entirety of the Eggman Empire's Fleet… but can they win?

The Battle for Angel Island, Part 3[]

Angel Island is currently in freefall. On the island, Blaze has taken flight, concerned that her earlier actions have brought about the island's descent. She meets up with Tangle and Amy on a nearby Egg Fleet battleship and apologizes for causing the island to fall. Amy corrects her: if Angel Island is falling, then it means something has happened to the Master Emerald.

At the Master Emerald's shrine, Sonic, Knuckles and Shadow are busy dodging large crystal shards that are being fired at them by Master Overlord. Sonic himself takes a small solace in that they are not facing Super Neo Metal Sonic anymore. Knuckles, meanwhile, contacts Amy. Telling her of Neo Metal Sonic's transformation, he asks if Burning Blaze is still around for heavy support. Amy relays that question to Blaze, who informs them that the Sol Emeralds' power has been diminished since their last usage, meaning she cannot transform again for a while. Knuckles promptly tells Sonic that Burning Blaze is out of the picture, and Sonic notes that Super Sonic is not an option either since they do not have the Chaos Emeralds. With Shadow determined not to lose to Master Overlord, Sonic comes up with a plan.

In the captain's room on the Egg Fleet battleship, Vector points out to Tails that Master Overlord was heading directly towards them. Tails corrects Vector and states that they are instead heading straight for Metal Overlord as Sonic and the others needed help otherwise Angel Island would be lost. Tails requests for Vector to tell Amy to get everyone on deck as he tries to move as close to Metal Overlord as he can. Tails then begins to shoot at Metal Overlord with the battleship. Knuckles glides towards the robot's torso while telling Amy to help take out Metal Overlord's wings. Sonic and Shadow run up Metal Overlord's body towards his left and right wings respectively.

Elsewhere, in the Final Egg, Rough and Tumble have restrained a protesting Eggman, who is fearful of what is about to happen to him. Eggman's offers to fix anything for the skunk brothers is dismissed and the doctor soon meets an unfamiliar scientist named Dr. Starline. Eggman still claims to him that he is "Mr. Tinker" but Starline knows better as he has apparently made a career out of studying him. Starline declares that he will return Eggman to his former glory, making "Mr. Tinker" protest even more that he would not want to be Eggman. Starline simply tells him that Eggman would not want to be "Mr. Tinker" either and puts goggles over his face that begins to electrocute the doctor.

Suddenly, Master Overlord shakes the Resistance off, leaving those who are not fliers to free fall. However, Silver manages to catch everyone with his psychokinesis midair. As Silver does his best to concentrate, Master Overlord attempts to attack him. However, he is immediately rammed by the battleship, something which Tails delights in. As Master Overlord turns to face Tails, Knuckles finally manages to remove the Master Emerald. Knuckles then glides right down to his shrine and places the Master Emerald back on its podium. Angel Island barely touches the ocean and slowly rises back up, much to the relief of a laughing Knuckles. As Silver brings everyone down to the surface, Sonic immediately seeks out the destroyed battleship, worrying for Tails. Tails is revealed to to be fine and even though he agrees with Sonic that his actions were amazing, he says that does not think he would want to do it again anytime soon. As Sonic finds a decommissioned Metal Sonic nearby, Sonic believes that Tails has nothing to worry about as the fight is over.

After a tiresome battle, the team rest up and take a breather, aside from Shadow who almost immediately leaves. As Knuckles expresses gladness in being back home, he asks of Metal Sonic's status. Tails replies that he is offline, leaving the battle outcome in their favor. Sonic relays his happiness in Metal Sonic's defeat, Eggman being reformed and the day being saved once again. Meanwhile, back in Eggman's lab, Starline states that the first round of Eggman's procedure is complete and asks the doctor if he is feeling more like himself.