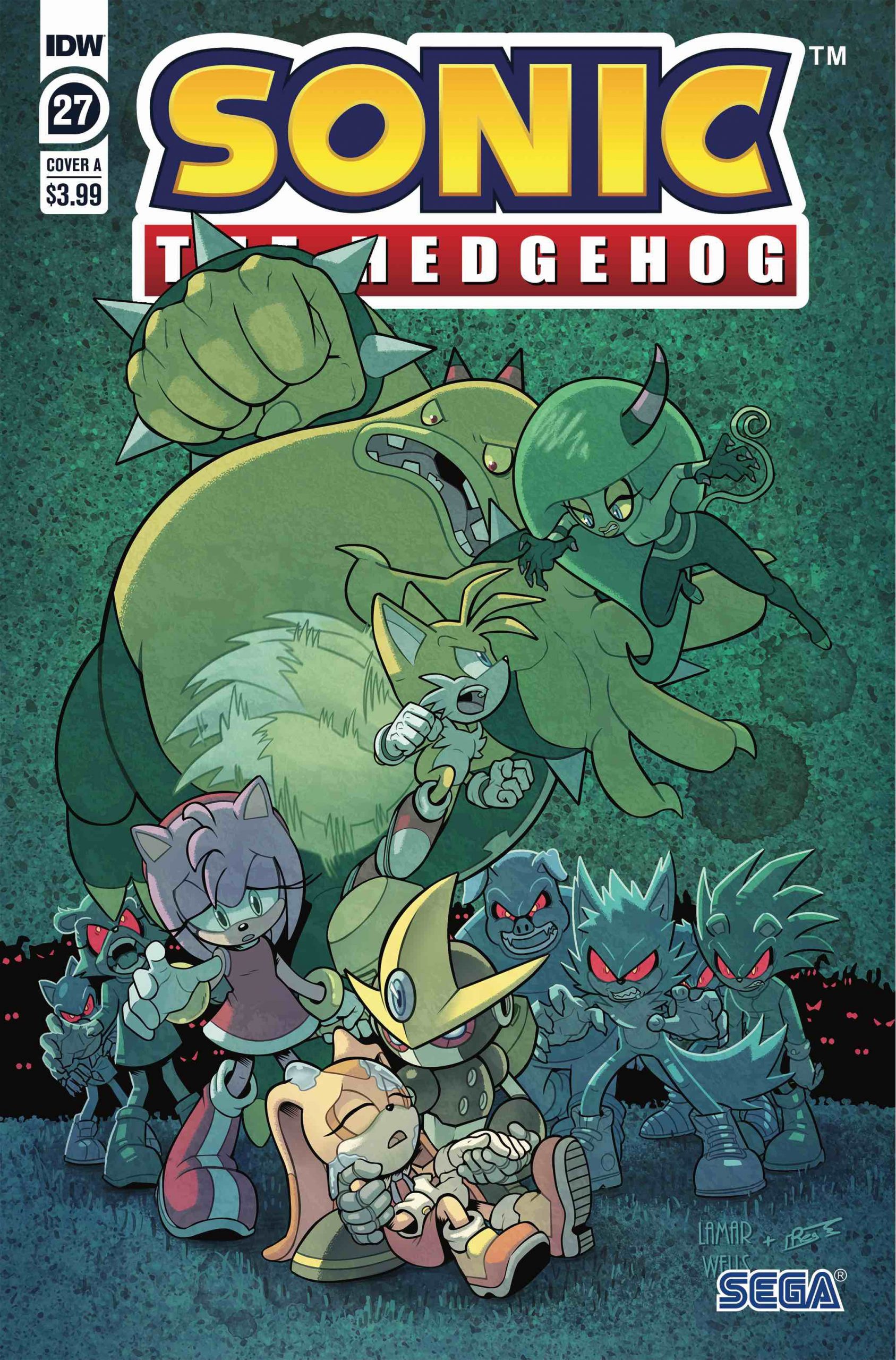 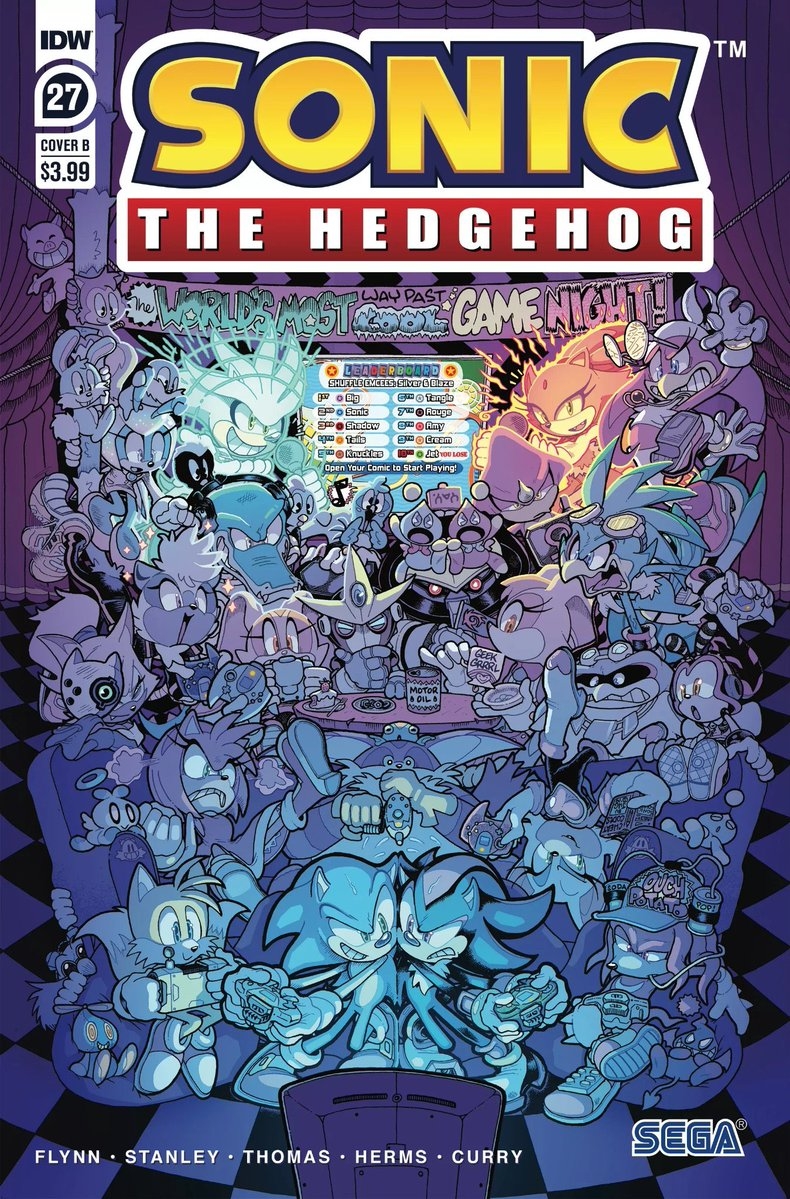 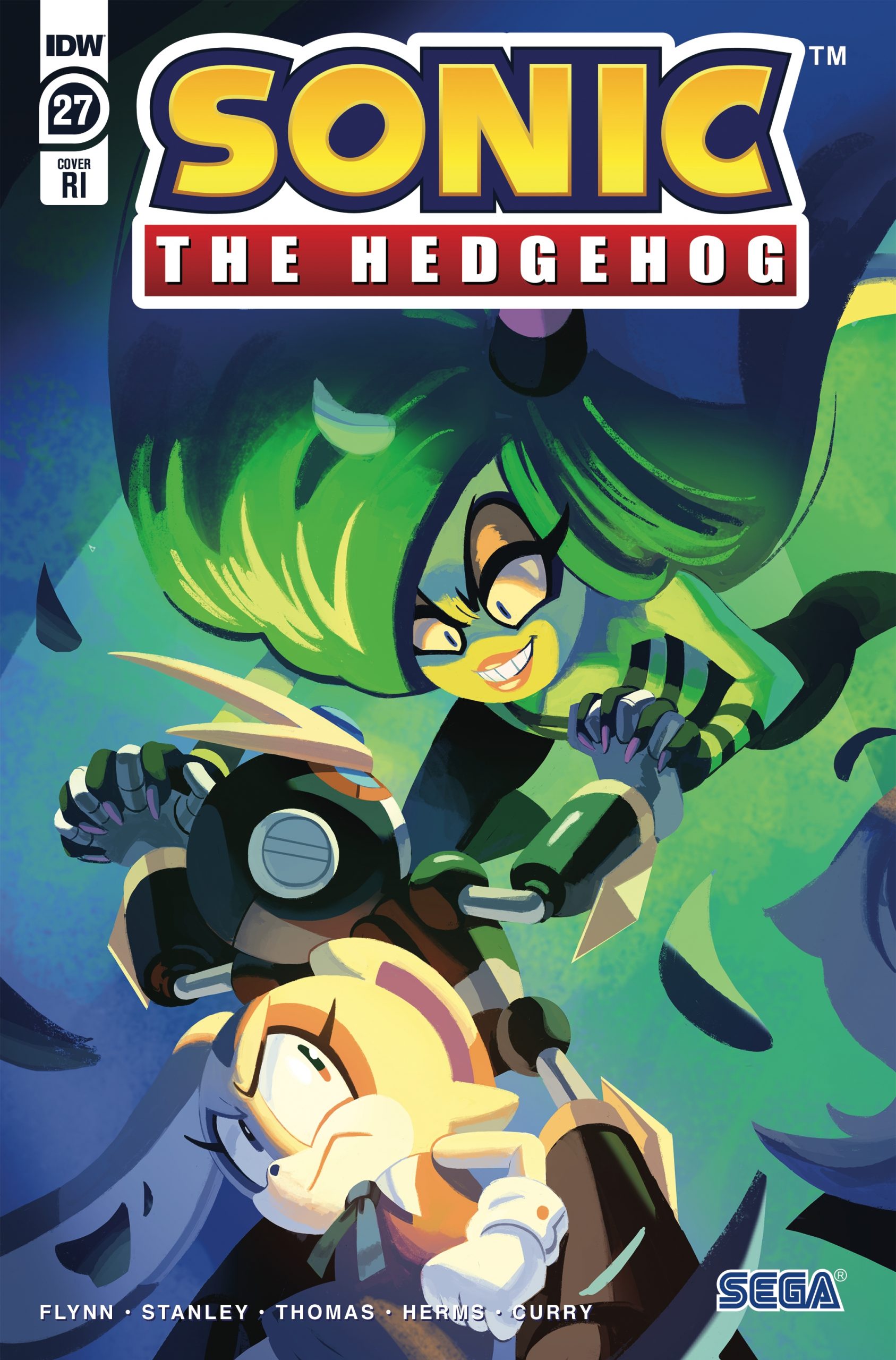 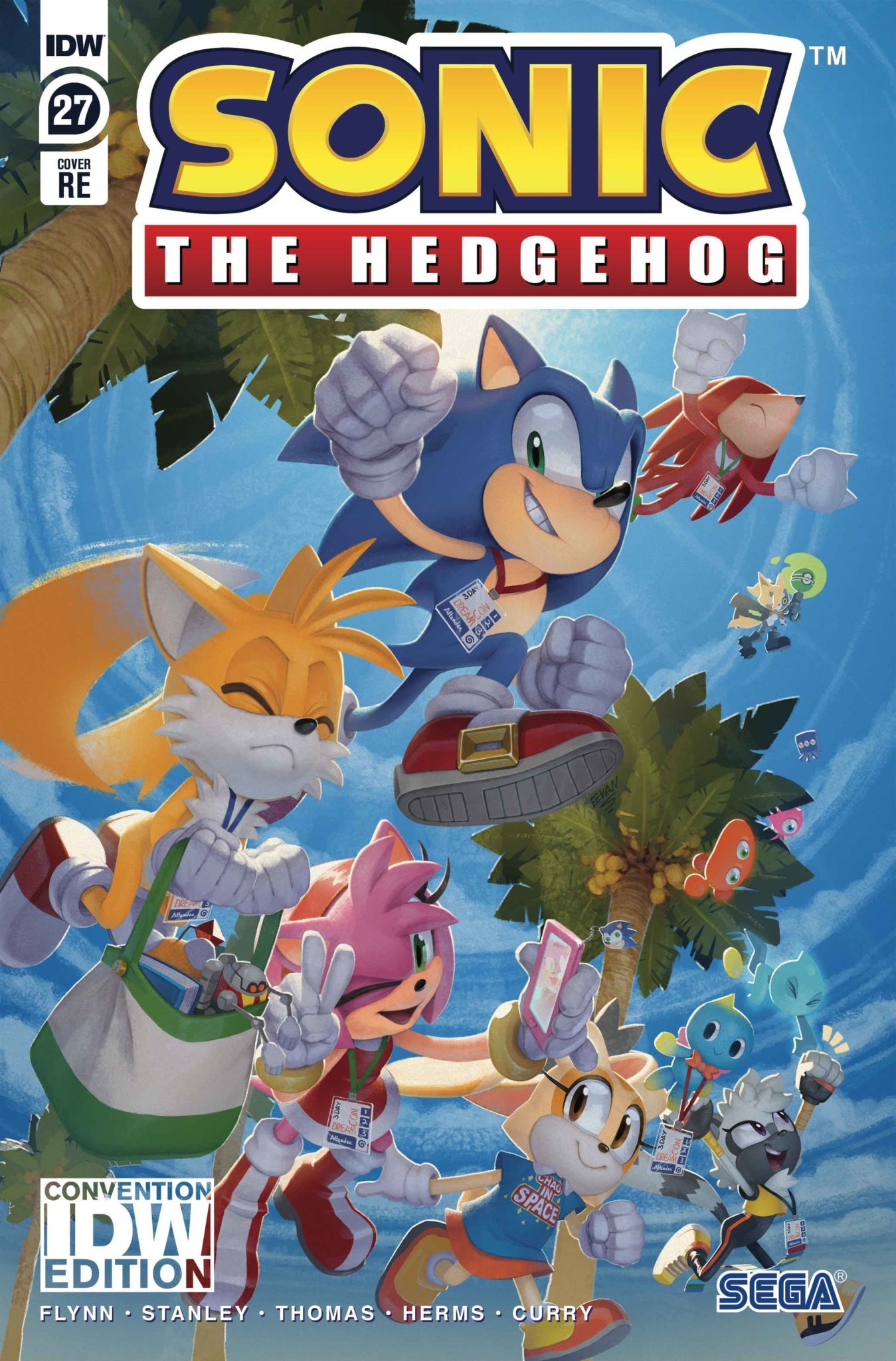 The remaining heroes of the Restoration have split-up to retrieve the Chaos Emeralds and hopefully save their world. Will Tails, Amy, Gemerl, and Cream be able to get the Emeralds, or will the Restoration's last desperate plan fall to ruin?

In Vista View, Tails and Amy are running away from Zomom who is trying to attack them. Amy questions how someone his size could move so fast to which Tails replies that they should just keep running. Amy refuses as they came for the Chaos Emerald so that they could end this nightmare. She turns around and hits the Zeti with her hammer, which makes him slow down onto the floor. As Amy is in disbelief that it worked, Zomom lifts his head to reveal that he was tasting the hammer. Disgusted, Amy tries to pull her hammer from his mouth. To help her, Tails hits Zomom with his tails; this angers Zomom and he claims that he will chew them extra hard before swallowing. As Amy is unsure if he was being metaphorical, Tails grins and asks why he would bother with them if he could have his lunch; he tells Zomom that he dropped it while he was chasing them and that it was too bad because it looked "really yummy."

Excited, Zomom runs off to look for the food. Amy asks Tails what they were going to do as Zomom was too strong for them to take down and was too stupid to outwit. The fox cub tells her that he did not know, claiming that Sonic made it look easier before. Noting that he seemed easily distracted, Amy suggested that one of them bait him while the other grabbed the Emerald; Tails calls her plan risky but comments that it was worth a try. The two soon hear a large yell and see a rampaging Zomom, stating that Tails lied to him about there being food. As Zomom was now "hangry", he began to send several Zombots after Tails and Amy. The fox cub helped fly Amy up into the air but she did not think it was going to work as the two witnessed the infected scale up the housing.

Meanwhile in Sunset City, Cream slowly backs away from Gemel who is being controlled by Zeena; the Zeti laughs at her, saying that he could no longer hear her. She asks how stupid Cream was after pointing out that she brought a robot to fight her even though she knew that she could control machines. Cream continues to plead with Gemerl, saying that she knew he wanted her to stay behind so that she could be safe; she continues saying that the Gemerl she knew was too tough to be pushed around has a kind heart. Finally, she exclaims that she believes in him and knows that he will listen to his heart. Suddenly, Gemerl punches the left side of his head, causing him to stumble into an embrace with Cream. He reports to her that the foreign signal was identified, his wireless receiver was critically damaged and the electro-magnetic signals were disrupted; even with this, Cream states that he heard her, to which he simply replies "...yes."

Unimpressed with having to get up and work, Zeena uses the power of her Chaos Emerald to create energy tethers and grabs Gemerl's hands and feet with them. In control of his movements again, Zeena forces Gemerl to attack Cream; though the young rabbit protests, Gemerl states that it was an external interference and he could not override it, which leads him to tell Cream to duck. Cream dodges by using a Spin Dash and then attacks Zeena with it. While Zeena is appalled that she hit her, Cream ineffectively stamps on the tethers to try and free Gemerl, while saying that she hated fighting, hated seeing her friends hurt and hated how mean the Zeti was. In response, Zeena bounces Cream off with the tethers and slams Gemerl into the ground. She then throws the robot into a crowd of Zombots, leaving him to viciously attacked by them, much to Cream's dismay. With the young rabbit distracted, Zeena kicks Cream up and holds her by the ears with her arm pinned to her back; though the young rabbit tried to fight back, it was for nought. Zeena then talks to Cream saying that she knew her type: the good little girl that worked so hard to please everyone. Zeena continues by saying that Cream thought she was better than her because she has the moral high ground; however, as several Zombots approach, Zeena shows her where her beliefs got her and jokingly asked what the matter was with her as she thought she was supposed to be friends with everyone.

Back in Vista View, Tails and Amy continue to run away from Zomom and the Zombots; Amy says that they could not keep this up but Tails claims that he was thinking. Zomom calls the duo annoying and spins into the ground, creating a mini earthquake and causes the building the the two were on to collapse; Tails manages to fly Amy to safety onto the town gate. After the fox cub flops onto the ground, Amy asks him if he is okay. He replies that he was just worn out. Amy tells him that they needed to keep moving but Tails refuses, saying that they needed to stay right where they were. As Zomom charges through the ground to the gate, Tails tells Amy to wait for the right moment; once he tells her act now, he and Amy hit the gate's wheels which forces lower down onto Zomom, trapping him. The dazed Zeti is helpless to do anything as Amy and Tails note how they both overpowered and outsmarted him. Tails removes Zomom's Chaos Emerald and leaves with Amy; Zomom calls out after them, stating that without the Emerald he could not control the Zombots. The Zeti soon finds Zombots approaching him while he cannot move.

In Sunset City, Zeena claims that her arm has started to cramp up and tells Cream that she was done with her, to which the young rabbit protests against. From behind, Gemerl bursts out from the horde of Zombots, rushes at Zeena, grabs her by the hair and slams her downward. He lifts Cream up and she asks if he is okay; the robot replies that he is as long as she is. Zeena instead angrily exclaims that neither of them will be and grabs Gemerl with her tethers again, forcing him to drop Cream; this time, Gemerl quickly flies around Zeena, tying her up in her own tethers and yells for Cream to retrieve the Chaos Emerald. The young rabbit does so and after she removes the Emerald, Zeena's heightened powers disappear, also revealing some of the Metal Virus liquid on her chest. As Zeena is stunned at what had just happened, an enraged Gemerl appears behind her, reminds her that she hurt Cream and grabs her by the hair again; he circles Zeena round and round and then tosses her into the horde of Zombots, where she is grabbed and infected against her will. As Gemerl consoles Cream, they hear Zeena scream.

Cream apologizes to Gemerl, to which the robot says that she should not be as he required her assistance after all. However, Cream reveals that she was infected by the Metal Virus on the wrist in the process. Not wanting infect the others or worry them, she hands the Chaos Emerald over to Gemerl and tells him to go back on his own. She tearfully looks at him and then hides her face in her hands so say that she will be brave and just hide her eyes. Gemerl instead throws the Chaos Emerald through the Warp Portal and carries Cream away. As Cream wonders what he was doing, he clarifies that he will stay with her until she was well as her infection spreads. On Angel Island, Sonic asks Eggman if he could see what he sees. The doctor looks to see the Faceship approaching the island it and states that they were out of time; Zavok had found them.