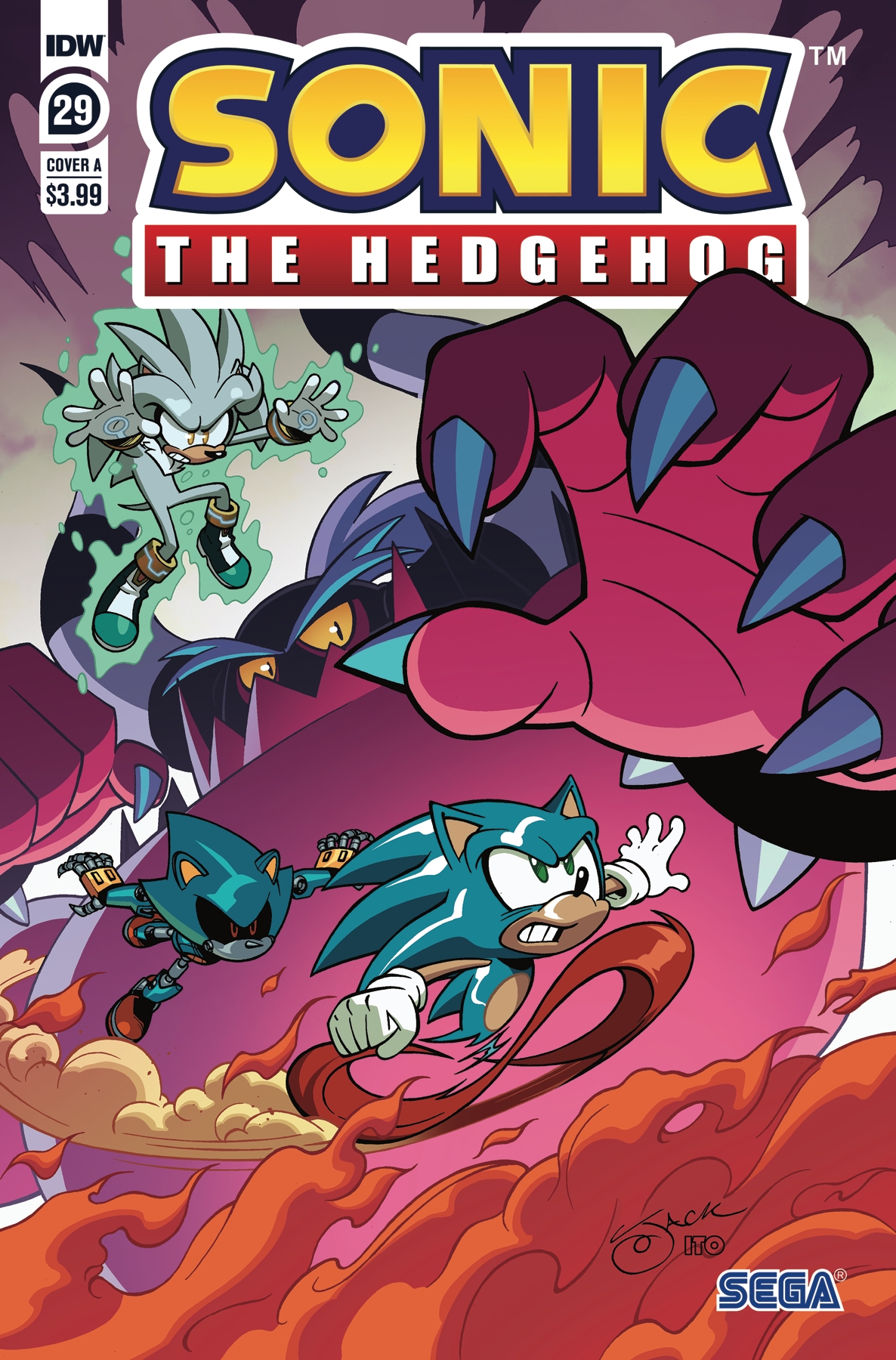 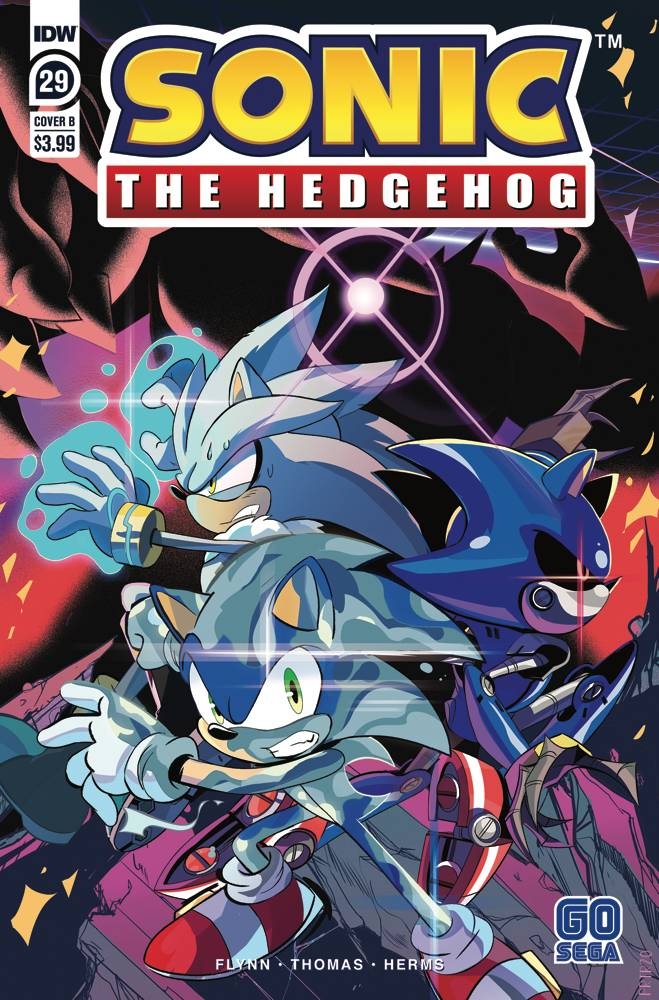 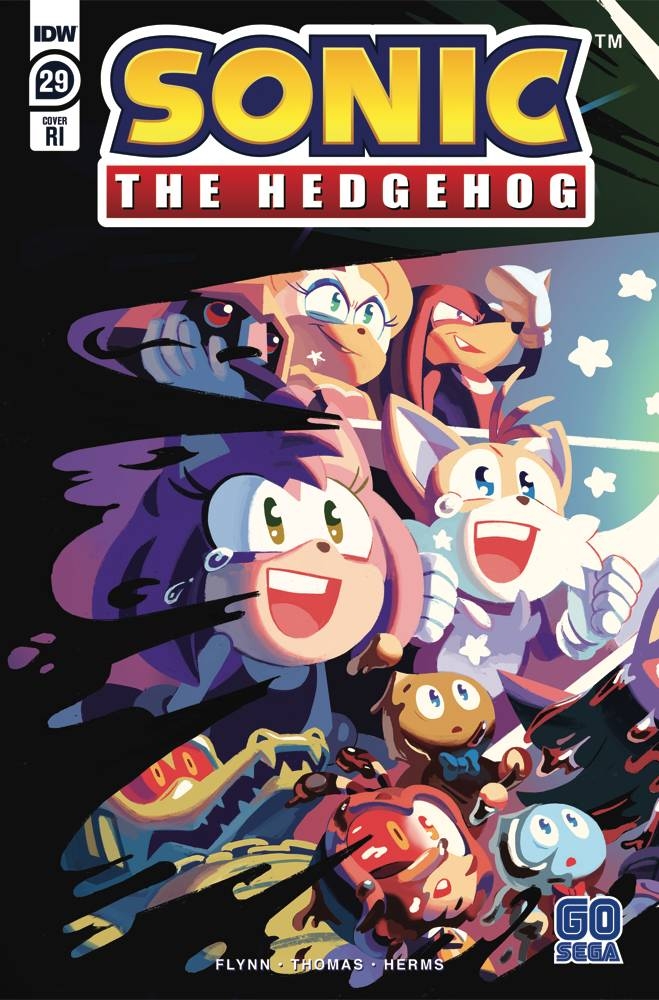 This is it! Sonic and the remaining members of the Restoration team-up for their final fight against the ultra powerful Deadly Six. Not only do they have to take on Zavok, but a legion of zombots as well! The thrilling final battle of the Metal Virus Saga!

On Angel Island, the survivors find themselves face-to-face with a legion of Zombots, including some of their infected allies. Sonic admits that the situation is bad: having charged himself up on Chaos Emerald energy, Zavok was blasting the island with fireballs while using his souped-up electromagnetic powers to throw Zombots to the island's surface. Knuckles complains that Sonic always brings trouble to his island and states that there is nowhere left to run, but Sonic says that he has a plan and asks Knuckles to trust him. Knuckles warns Sonic that he will haunt him if his plan fails and proceeds to punch Shadow, infecting himself with the Metal Virus in the process. Sonic yells for him to stop, but Knuckles is determined keep the Zombots away from the Master Emerald and the refugees on the island. He then tells Sonic to go save the day already, prompting Sonic to run off with Silver following him. As he passes Metal Sonic, he requests his help as well; Dr. Eggman orders the robot to do so in order to save him (and everyone else by extension).

Metal Sonic lifts Sonic in the air while Silver flies alongside them with the Chaos Emeralds. Zavok sees the trio and mockingly asks if this is all they can muster as their last line of resistance. Although his means of creating more Metal Virus has been destroyed, he still commands the Zombots; he announces that he will use them to infect every last inch of the world, determined to see it grow sick and perish. As he says this, Zavok throws another handful of Zombots at the trio, which Metal Sonic narrowly dodges with swift flying maneuvers. Sonic then tells the robot to head straight for the Chaos Emerald on Zavok's chest.

Zavok shoots out another fireball at Sonic and Metal Sonic. It appears to engulf the duo in flames, much to Silver's dismay; after the smoke clears, it is revealed that Metal Sonic had actually activated his Black Shield to protect the both of them. Sonic remarks that he is glad that he and Tails did not deactivate him when they had the chance. Zavok reaches out and tries to grab Sonic and Metal Sonic, only for Silver to put place a barrier between the duo and the Zeti's hand. As Metal Sonic deactivates his shield, Sonic thanks Silver for his help and tells him not to drop the Chaos Emeralds; Silver tells him to just focus on getting the last Emerald. With the Emerald in sight, Sonic tells Metal Sonic to fly him in close; before they can do anything, Zavok exhales a mighty breath to blow the duo straight into the ground below.

As Sonic sits up, he meets Orbot and Cubot. The former suggests that Sonic should start running, but the hedgehog admits that his infection has overcome his speed. Orbot clarifies that he was suggesting Sonic run from the Zombots surrounding him. As Sonic readies himself for a fight, he asks his friends to give him a little bit longer. On the island, Tails desperately tries to fly away from Cheese and Chocola but cannot shake them; Knuckles suffers a strike from Shadow; Whisper is approached by Tangle but struggles to fight against her; Espio dodges attacks from both Vector and Charmy; Eggman finds himself crawling away from Big as he slowly approaches him.

Amy jumps in and hits Big with her hammer, only to see that it did not do anything. Suddenly, she is kicked into the cat by Eggman, thanking her for slowing Big down for him. As Amy is infected, Eggman continues his escape, planning to get to the Rescue Shuttle and leave for himself. Unfortunately for him, he slips on a Zombot Froggy, who jumps high into the air to land on the terrified doctor. Knuckles continues to pummel Shadow into the earth, despite being almost fully engulfed by his infection, but the Zombot hedgehog finally stops the assault by grabbing his fist. The echidna completely succumbs to the Metal Virus shortly afterwards, turning to Tails who is fearfully asking Sonic for help as Cheese and Chocola pin his tails down to infect him.

Down below, Sonic tries to escape the clutches of several Zombots who are piling up on him; Metal Sonic arrives to hit the infected off of the hedgehog. Sonic then asks for Metal Sonic to take him back up to Zavok. The Zeti tells Sonic to accept his fate, saying that he has lost and all machines were his to control. With this, Zavok forcibly takes control of Metal Sonic and flings him backwards, forcing Sonic to run up his body. As he pulls the Chaos Emerald out from Zavok's chest, he yells for Silver to initiate their plan. Sonic then falls with the Emerald as his infection nears its completion, prompting Silver to fly towards him with the rest of the Emeralds. As Sonic closes his eyes and Silver approaches him, Zavok attempts to clasp his hands around the both of them.

With a blinding flash of light, Super Sonic and Super Silver break free from Zavok. The power of the transformation completely destroys Sonic's infection. Super Silver asks if he was ready to save the world, only for Super Sonic to reply that he wants to take care of Zavok first. Defiant to the last, Zavok declares that he will crush the duo with his remaining strength - unfortunately for him, Super Sonic delivers a flurry of blows that send him flying back into the debris of the Faceship, reduced to his normal size. Though Super Silver notes that this seemed a little anticlimactic, Super Sonic states that they did not have time to be fancy. Super Silver agrees, noting that the Warp Topaz that he had in hand was not reacting to their power too well.

Super Sonic tasks Super Silver with using his enhanced psychokinesis powers on the world while he used the Warp Topaz to open a Super Warp Portal. With this, Super Silver began the process of removing every atom of Metal Virus from the world, gradually returning the infected to normal. Tails happily celebrates with Cheese and Chocola; Amy hugs Big, who accepts the embrace despite having no idea what was going on. Tangle regains consciousness, wondering why she was back on Angel Island before being rushed and met with a large hug from Whisper and her Wisps. The reunited Chaotix happily sing together as a defeated Eggman lies on the ground with Froggy croaking away on top of him.

As Knuckles and Shadow return to normal, they exchange brief greetings before angrily turning to see Rouge lying down on the Master Emerald. She states that as the world was ending, she wanted to spend her last moments with the one she loved. Down below, Vanilla and Elder Scruffy support each other, with the latter making sure that the former was okay. Behind her, she hears Cream call out to her as she arrives with Gemerl; the latter explains that Cream had instructed him to bring her to Angel Island under the assumption that Sonic would succeed, asking if he arrived with acceptable punctuality. Both Vanilla and Cream ignore the robot as they deeply hug each other, leaving Gemerl to decide to wait.

As they continue to warp the Metal Virus away, Super Silver asks where Super Sonic was sending it; the latter replies that it was going somewhere it would never hurt anyone again: the sun. Noting that the Warp Topaz was not going to last much longer, Super Sonic and Super Silver decide to speed things up by flying over the entire planet several times at supersonic speed. Soon enough, Super Silver notes that he cannot detect any more Metal Virus, believing that they were finally done. Super Sonic then grabs onto the Warp Topaz, stating that it was time to get rid of it. However, a large explosion occurs that thrusts Silver, now back to normal, back onto Angel Island.

As Silver is checked up on by Amy, Tails and Knuckles, he explains that it was over; he and Sonic managed to pull away every bit of Metal Virus and destroy it. However, he notes that Dr. Starline was correct on the Warp Topaz not being able to handle all that power. Silver explains that Sonic tried to ditch the Topaz in the Super Warp Portal as the group looked up to the sky, seeing a distorted green gate of energy with Sonic nowhere to be found.