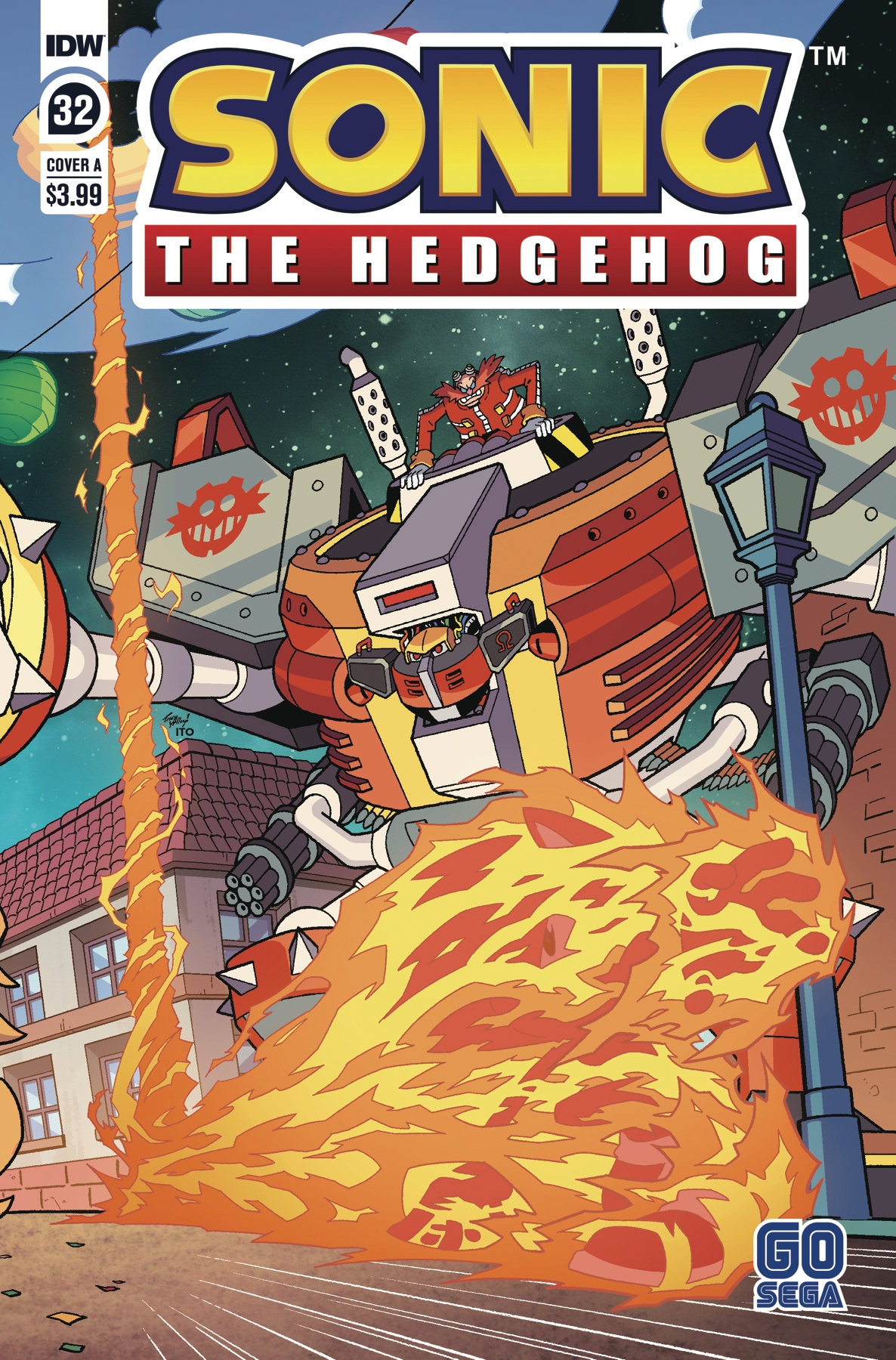 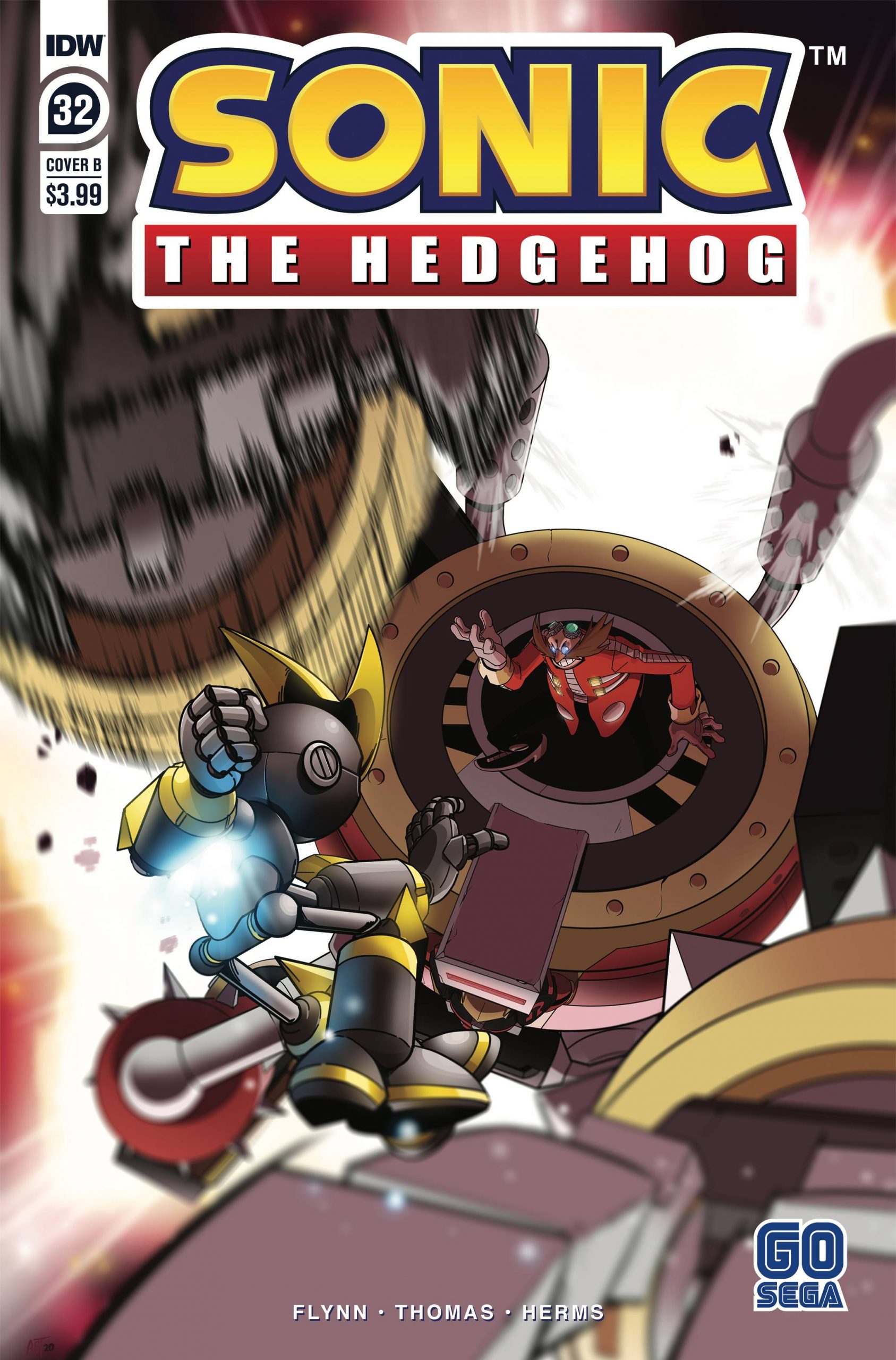 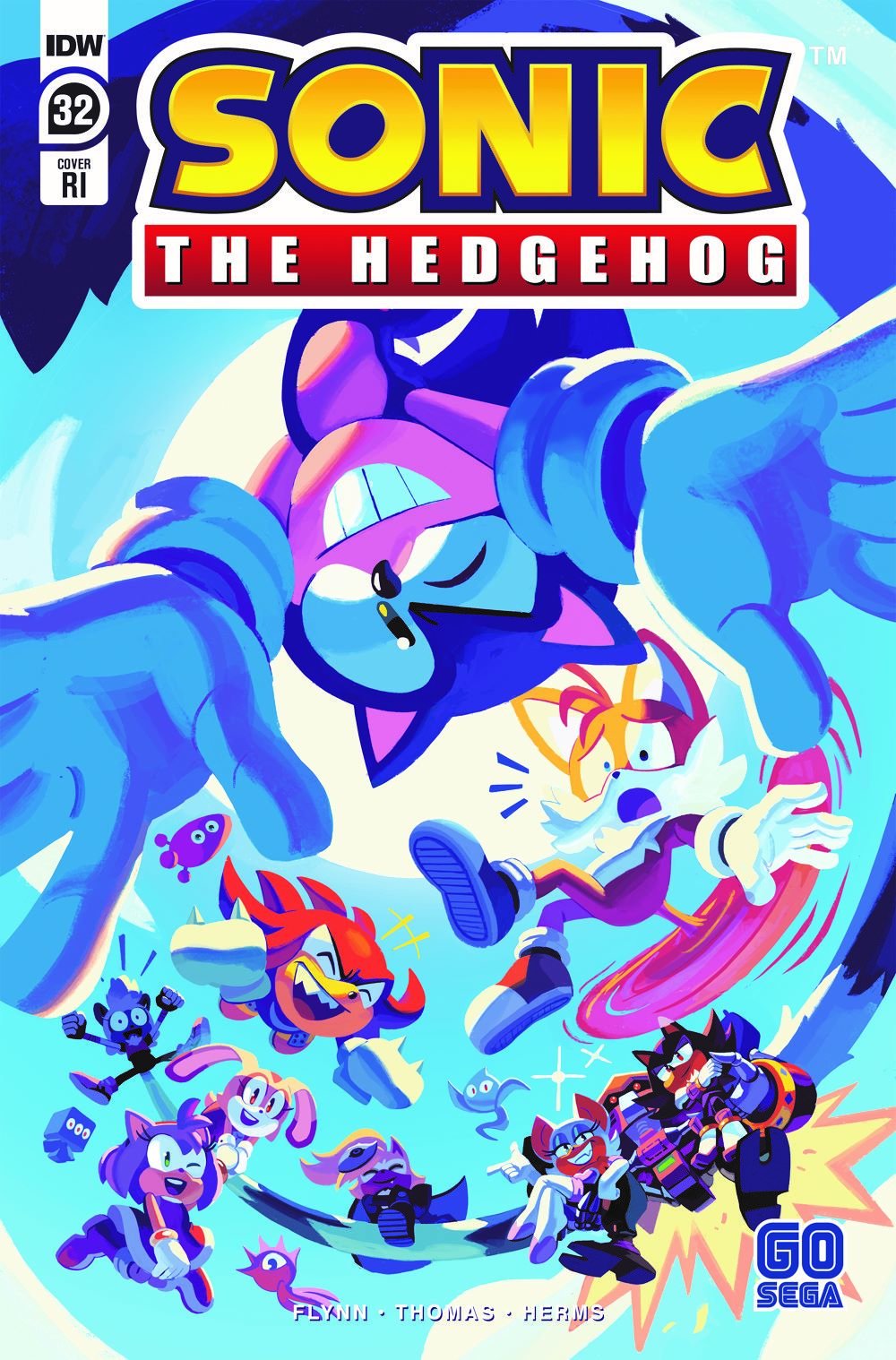 In Spiral Hill Village, Dr. Eggman has crashed the group's celebration while piloting the Giga Omega mecha with Omega incorporated into it. He thanks them for gathering all in one place and thus making it easier for him to destroy them. Whisper turns to Amy for orders, only for the hedgehog to say that she was no longer leading the Restoration and had passed it off to Jewel. Whisper then asks Jewel for orders, but the frightened beetle tells her that she does not know and everyone else were the hero types. Behind a building, the Babylon Rogues watch, and Wave asks what they should do. Jet says that they already helped the heroes once, so this time they will leave them to handle Eggman while they help themselves to some gems and leave. Nearby, Big calls out for Froggy, who has gone missing again.

Vector decides to take charge and orders Tails to try disrupting Giga Omega's programming with his Miles Electric. He then tells the fliers of the group to try and bust into Giga Omega's cockpit. The rest of the crew are grouped with him to aim for the leg joints and bring Giga Omega down. The Babylon Rogues enter the Mineral Museum but find no gems present. Unbeknownst to them, Rouge had confiscated them all so that they would not get to them. She notes that returning them would hurt her, but it was worth it for just this moment. Gemerl flies quickly at Eggman, declaring that he will not menace Cream further. The young rabbit yells for Gemerl to be careful, only for Eggman to electrify him with tethers and pull him into Giga Omega's mouthplate, forcibly adapting him with the mech in Eggman's favor of an upgrade. The doctor laughs about this, stating that he now had twice the combat coding and processing power, making it a quadruple power-up overall. He then launches a barrage of missiles alongside a large laser.

Meanwhile, at the Imperial Palace on Blaze's world, Blaze welcomes "Mr. Needlemouse" back from his jog around the island, and she and Gardon express relief at the fact that Sonic was at least still running. Gardon brought a case to Blaze and questioned if she was sure it would work, to which the cat answers no due to the nature of Sonic's arrival and memory loss all being a mystery, making anything they attempt uncertain to an extent. However, she has faith in the power of the Sol Emeralds, and states that as their guardian, only she may use their power for this task. As such, she transforms into Burning Blaze and calls Sonic's attention to her, after which she begins to chant that the Sol Emeralds will help him to remember and asks that he gaze into the sacred fire to have it fuel the winds of his spirit. Adding on to this, she asks Sonic to return to them and return to the hero she knows him to be. "Mr. Needlemouse" asks what she was talking about and questions why she was on fire. However, as he looks at the fire around him and sees past memories, he begins to ask why it was so familiar.

Back on Sonic's world, Rouge asks Tails if he has plan. He says that he wrote some code that should interfere with Giga Omega's systems and eject Gemerl. However, there was no wireless receiver, meaning he would have to use a hard line to upload it. As breaking and entering was Rouge's specialty, she was prepared to help. On Tails' count, he and Rouge fly in and look for an access panel on Giga Omega. The bat notes that the construction quality on Giga Omega was rather poor, meaning that Eggman had built it in a hurry and probably did not have much to hide. She successfully finds an access panel, allowing Tails to hook his Miles Electric up to it. Tails' code does its job and ejects Gemerl from Giga Omega. When Charmy and Cream check up on him, Gemerl initiates a system reboot. Tails notes to Rouge that Omega was literally part of Giga Omega; when Rouge asks him to get him out, the fox says that he is trying but he was hardwired into the chassis. As Tails mentions trying to see if there was an ejection protocol, Eggman spots the pair, opens his cockpit, gets a laser gun, and shoots directly at them. Rouge manages to move Tails out of the way in time.

Omega's primary systems return online, while his secondary programming was active. He found conflict within himself as he wanted to both destroy Eggman and destroy Eggman's enemies. Due to this, the barrage of projectiles stopped, giving the others time to directly attack Giga Omega head on. Cheese hits Eggman on the head, prompting him to close up the cockpit again. He dials in an input to put Omega under his control again. Charmy tries telling Omega to fight him but the robot's systems are overridden, allowing Giga Omega to try swing at the bee. Luckily for him, he dodges the attack.

On Blaze's world, Burning Blaze returns to normal and asks Sonic how he felt as he hunched over. After a short pause, the hedgehog gets up and says that he feels like he did too many loop-de-loops in a row, but definitely a lot less warped. With his memories finally restored, Sonic thanks Blaze for her help. She is glad that Sonic has returned to normal and asks if he remembers if his world was all right. Though it was fuzzy, Sonic recalls handling events with Silver, to which Blaze responds that in "handling it", Sonic crash-landed in her garden with amnesia. As the cat gives him a suspicious look, Sonic nervously says that she knows how he likes to make an entrance and apologizes. Sonic then says that he did not say goodbye to the others before leaving; knowing that everyone would be worried, he asks if Blaze could send him back home. Blaze accepts, asking him to give her best to Amy and Cream. He acknowledges this but asks that she come visit soon as they all miss having her around. Blaze thanks him and says that she will before using her power to send Sonic back to his world.

In Spiral Hill Village, Eggman's states that the group put up a good fight against him but it was time for him to raze them and the village to the ground. Before he can do this, Sonic arrives in a burst of fire and asks if they missed him. Looking at an injured Tails and a shocked Eggman in his Giga Omega, Sonic notes that he was unfashionably late. Asking Tails for an update, he states that Eggman was using Omega as the core for Giga Omega. Getting the message, Sonic jumps onto Giga Omega much to Eggman's protest. He proceeds to attack Giga Omega's center at a high velocity before finally getting behind Omega and pushing him out. Free from Eggman's clutches, Omega unleashes a barrage of gunfire at Giga Omega, completely destroying it. Eggman flies out of the mecha in his Egg Mobile in time before this occurs, and Omega falls apart after being severely weakened. Irritated by his defeat, Eggman rhetorically asks that Sonic could not just stay gone and he had to ruin his fun, to which Sonic confidently replies that he always would, anytime and anywhere. He tells Eggman to come a little close so that they could go another round. The doctor nervously sweats, asking if Sonic was still sore about getting infected and nearly becoming a Zombot, which the hedgehog confirms was on the list. Eggman states that he still ruined the party so the day was his, and adds that his next sinister plot will be unbeatable. Eggman and Sonic say their goodbyes, with Sonic saying to himself that maybe Eggman will eventually come around.

Sonic is suddenly hugged by an overjoyed Amy, who says she was worried she would never see him again. He brushes it off, telling her he was fine and adding that Blaze says "hey." Tails joins in on the hug, saying that he knew Sonic would be back. Tangle pops by, asking if they were getting their victorious group hug on. When Sonic confirms it, she uses her tail to wrap everyone into one group hug around Sonic. Jewel comes by, prompting Tangle to say that she missed her and she could wedge in between her and Sonic. However, Jewel wanted to point out that the town was still on fire. Sonic states that this was easily fixed and tells Tangle that her home town was invasion-prone; the lemur replies saying that her town was perfectly boring until he showed up. Following this, Sonic, Tangle, and the others begin putting out the fires with pails of water. Later, with all the fires put out, Sonic sits on a roof by himself, thinking to himself that it is good to be back and healthy. He hopes that Silver and Blaze can come back to his world and not have to deal with some sort of disaster. As the sun rises, Sonic reminds himself that a new day meant new adventures, and sets off to find out what is next for him.