Is Princess Sally just a tool of SoA? Does she even remotely deserve the kind of treatment Sega gives Sonic, or is she just another “quasi-character” butting into the real deal? A Sally fan takes a look at the neglect Sega gives Sal. 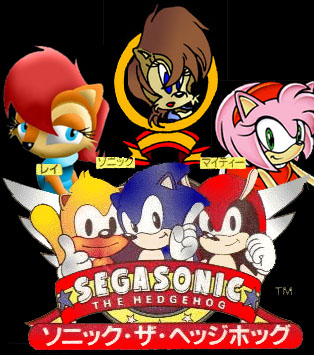 Hands up those who are waiting faithfully for Sonic Adventure 2. Very good…quite a few, I see. Hands up those excited to hear about the inclusion of a new female character.Again..all of you. Hands up those who want it to be sally…Hold it…only half…Okay…put 'em down. Now…before I continue, let me say that I am not saying that it will be Sally… I'm thinking more along the lines of…what are the chances, and why would she even have a chance!

As a few of you know…I myself am a Pro-Sally fan…She should at least have more mention, as Sega has used her name often in manuals, and her brief appearence in the NON-sonic team Spinball proves her existance. So WHO is responsible for this situation? Sega, ultimately created sally's name, and permitted her use in spinball. It is THEIR own fault she exists at all…So why do they insist on ignoring her?

It all started on the conception of Sonic number one…Sally Acorn was just a fluffy animal to rescue,another face in the furry crowd…but there was no real idea of her 'importance' at this time. She was then 'dropped' into the Stay Sonic book, conceived as part of the merchandise to promote the new game 'Sonic 2'…but then something happened…a game that saw a new sally, Sonic Spinball. This new sally was not significant enough at the time, but there was an occurence that shook up the fandom like nothing had ever done before…The introduction of the SATAM! The cartoon was popular among most of the fans, who were disappointed with the sonic series before it…AoSTH. The series cut fans to the quick with the storylines, brilliant voice acting, and an emotional feel that brought the charectors to life. Fans were hooked, and wanted more…alas, it never came after the second series.

Another moment in sonic history was the conception of the comic series from Archie, who developed on from the series, and kept the charectors 'alive'! When it was announced that Sally Acorn was to be killed off, fans were on tender hooks for the promised saga, End game. Sega called for a last minute change, as they were toying with the idea of including her in a future game or project, one which never emerged. This was a problem when the comic was produced, as the story had to be re-written, but the rewrite was a drastic cutdown from the original story. When the fans read the story, they felt cheated beyond belief, a feeling which they experienced more often as the time went on. Writers changed, came and left, often leaving a story unfinished, or endings drawn up in a poor effort.

In fact…Sega has control over the Archie books love affairs, and effectively 'neutered' any of Sonics relationship issues…but there is a DISTINCT lapse with knuckles…who has Julie Su…and SHE was NOT created by sega. So why the difference in status? Knuckles is a partial flagship mascot, and has his own girl, while sonic IS mascot, and cannot! Mario has a girl, Crash Bandicoot has a girl…why not the hedgehog who has competed?

But this editorial is not about the comic sally, it is about the abandonment of sega's creation, who was once thought to be sonic's ideal partner. A lot of fans disagreed about this, and insisted on Amy Rose, conceived AFTER Sally was first mentioned! The basic premise of the friendship between Amy and Sonic was actually a completely differant one from romance…Amy was the wannabe girlfriend, and Sonic avoided her when possible…but is forced to rescue her. She was NOT the girlfriend designated…neither was Sally at the time of her conception…SEGA never reckoned on having to give Sonic the girlfriend he deserved… he was the hero, not a hang up for girls.

IMHO, I think Sega are too concerned over the effects of the comic books influancing the gaming fanbase, but ultimately, the fanbase buy the games, read the books, wear the shirts, and KEEP THEM GOING! The company they are loyal to should realise that the charectors they create have a reason they're there…Sally came first…They owe at least a game with her in it… Why not make it SA2? Stubborness, Business-sense, Pure pigheadedness…we'll never know. To face facts…Sally was created by sega for sonic 1-3…and potentially beyond. SOME of the fans want the game with her…SOME of them dont. So why not make another sonic game, carrying a differant story, the SATAM base, and the other bits that make the sonic games a classic.

But then again…Why would they listen…Answer: they wouldnt. Sega knows their job…maybe Sally just wasnt the idea they wanted…but since she exists, what next for the princess? The same thing that happens to other old charectors…Oblivion.

Bleak picture, but it is the truth.