Interview With Funk Fiction – With regards to Sonic BeATS 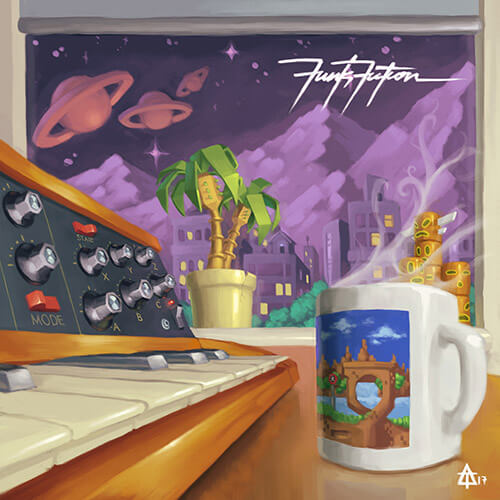 Materia Collective is thrilled to release Sonic BeATS, a collection of music by artist Funk Fiction written for the highly-regarded Sonic: Before the Sequel and Sonic: After the Sequel tribute games. Just in time to celebrate the18th birthday of the SEGA Dreamcast (released 9/9/99) and the classic Sonic the Hedgehog renaissance ushered in by Sonic Mania, the time was right to get these amazingly funky electronic pop soundtracks into the hands of fans for the first time. Sonic BeATS is now available.

The Sonic BTS and ATS soundtracks are widely praised as being one of the best parts of the games, with Sonic series composer Jun Senoue himself decreeing the albums as “excellent work” filled with “lots of catchy tracks.” Funk Fiction states his favorite game in the Sonic series “has always been Sonic the Hedgehog 3,” as he feels it “pushed the envelope with one foot in the familiar Sonic sound established in the first two games and another foot in the uncharted territory of complex yet catchy Michael Jackson vibes.”

“In the same philosophy of evolution from the first two Sonic games towards the third, I wanted to apply the same maturation for Sonic BTS and ATS,” comments Funk Fiction. “This time, integrating external influences such as Yuzo Koshiro’s Streets of Rage, the French Touch flavor of early Daft Punk’s Homework & Discovery, and the rich, gooey, and supremely funky essence of Jamiroquai. This is the result of what you hear in Sonic BeATS.”

Sonic: Before the Sequel (2012) and Sonic: After the Sequel (2013) achieved over 300,000 tracked downloads with the soundtracks in particular earning cult status on SoundCloud and YouTube, but the music hasn’t been made available for download anywhere until now. This music played a vital role in developing Funk Fiction’s musical identity, essentially launching his career. It’s with that idea in mind that he and Materia Collective have decided to give Sonic BeATS the official release it deserves, which also features brilliant artwork by Andy Tunstall.

Below we interview Funk Fiction, creator of Sonic BeATS

How did you become a Sonic fan?

I was five years old, hanging out at home with mom watching Nicktoons. Then dad came through the door holding a big black box. It was the Sega Genesis and it had Sonic 1 packed in. My life would never be the same. Sonic was the coolest character in existence. Everything from the gameplay to the music rocked my world.

How did you get into creating Sonic-themed music?

Being a lifelong gamer since the days of Genesis and SNES, Sonic and Mario were always icons that pushed and refined the imagination of an impressionable young self. I actually didn’t start my path of becoming a musician until I was 17, so I was a late bloomer in that sense. The two passions were a natural integration, though. I would even argue Green Hill and Marble Zone may have been one of the first, if not the first tunes I ever started humming. That sort of developmental influence was powerful and played a vital role in shaping my musical aesthetic.

Fast forward to 2012 when Falk was composing the music for Lake Feperd’s Sonic Before the Sequel. I reached out to him in hopes of contributing some music to the soundtrack. Being the kindly inquisitive and openminded professional that he is, I was lucky enough to make a good impression with some tracks I had already written. He had me come on board to the team and thus Metro Madness was born. The rest is history, as they say.

Do you have a favorite official Sonic track?

Yes, that’s easy. Hydrocity Zone Act 2. It is, quite simply, a perfect song. I revere it to the level of thinking it may have been composed through divine inspiration *laughs*. The way it essentially narrates a journey is both masterful and beautiful. The track plays like a microcosm of life itself, with all its struggles and triumphs. All the melodies and harmonies in perpetual rhythmic motion are delightfully complex and infectiously catchy. Truly a work of art!

Favorite track you’ve made yourself?

That one’s not so easy. Probably “Red Moon.” That track is quite genre defying. It’s both brooding and delicate. It was meant for a tough pre-final boss stage, yet it’s a slower groove that somehow works really well. Everything from the pumping bass and beats to the melodic piano and violin comes together nicely in a sweet contrast.

Where do you usually go for inspiration?

I enjoy getting out of the city to quieter and serene places. Whether it’s by lush mountains and lakes, or a calm desert, it’s nice to be reminded life isn’t always about running around in an automatic frenzy. That can be very inspiring.

I also find a lot of inspiration simply through playing with hardware. There is a power to limitation that ironically sets you free. Music from the 16-bit or N64 era are perfect examples of this. Composers were forced to write memorable music because of technological limits and in fact did so. We all still hum “Lost Woods” from Ocarina of Time, but not so much with most modern VGM. Boundaries can be elegantly liberating. A keyboard’s particular capabilities box me into making very creative decisions as opposed to perhaps being spoiled with thousands of sounds on a virtual screen, which can sometimes be overwhelming and possibly destructive for creativity. This isn’t absolute, however. There is a lot of software that inspires and excites. Balance is key. That being said, there is a huge charm to the way hardware circuitry can color the output of sound. Also, nothing beats the intimate connection formed by actually twisting knobs or pressing buttons!

What composing software do you use?

My DAW of choice is Logic Pro X, and I’ve been using Logic since version 7. I simply love it! It’s like a technical and artistic extension of myself. It comes natively equipped with great sounds and outstanding FX. As for 3rd party plugins, I love Spectrasonics Omnisphere and Trilian. I think they’re indispensable for composers. Korg’s Legacy Collection is a pack of soft synths I thoroughly enjoy as well. U-he’s Zebra 2 is also one of the most convincing analog sounding soft synths I’ve heard. Lots of great plugins out there, but NI, Arturia, and UVI stuff all get some love, too.

What do you think makes your music so popular?

I appreciate that. Not sure if I’d go as far as saying my music is ‘popular’.. at least not yet *laughs*. However, there is certainly an organic and significant following for my music, even if it isn’t massive. Those fans are quite loyal and at times fervently express their excitement for my music and I thank them for that very much. That sort of thing really keeps me fueled to push farther.

I would say the reasons for the relative popularity are attitude, authenticity, and a lack of compromise. This seems to resonate with most listeners who get exposed to my music. I suppose those attributes parallel the original concept of Sonic the Hedgehog. He’s cool, he’s got attitude, he’s gotta go fast! Hahah. But honestly, I do make a genuine effort in embedding substance even into tracks that are lighthearted. I try to capture and instill a part of my soul as a sonic signature. Call it what you may, a landscape of emotions perhaps. Maybe it’s the embodiment of acts such as Jamiroquai and Daft Punk, and the nostalgia of 90s Sega and Nintendo. Ultimately, I couldn’t tell you for certain, but these may very well be a big part of it.

Any plans for future Sonic tracks?

Definitely yes. A Sonic 3 tribute album has always been on my mind. Simply a matter of carving out the time to give it the proper and pure effort such a task deserves. I would also love to do more remixes and even more originals for new Sonic projects!