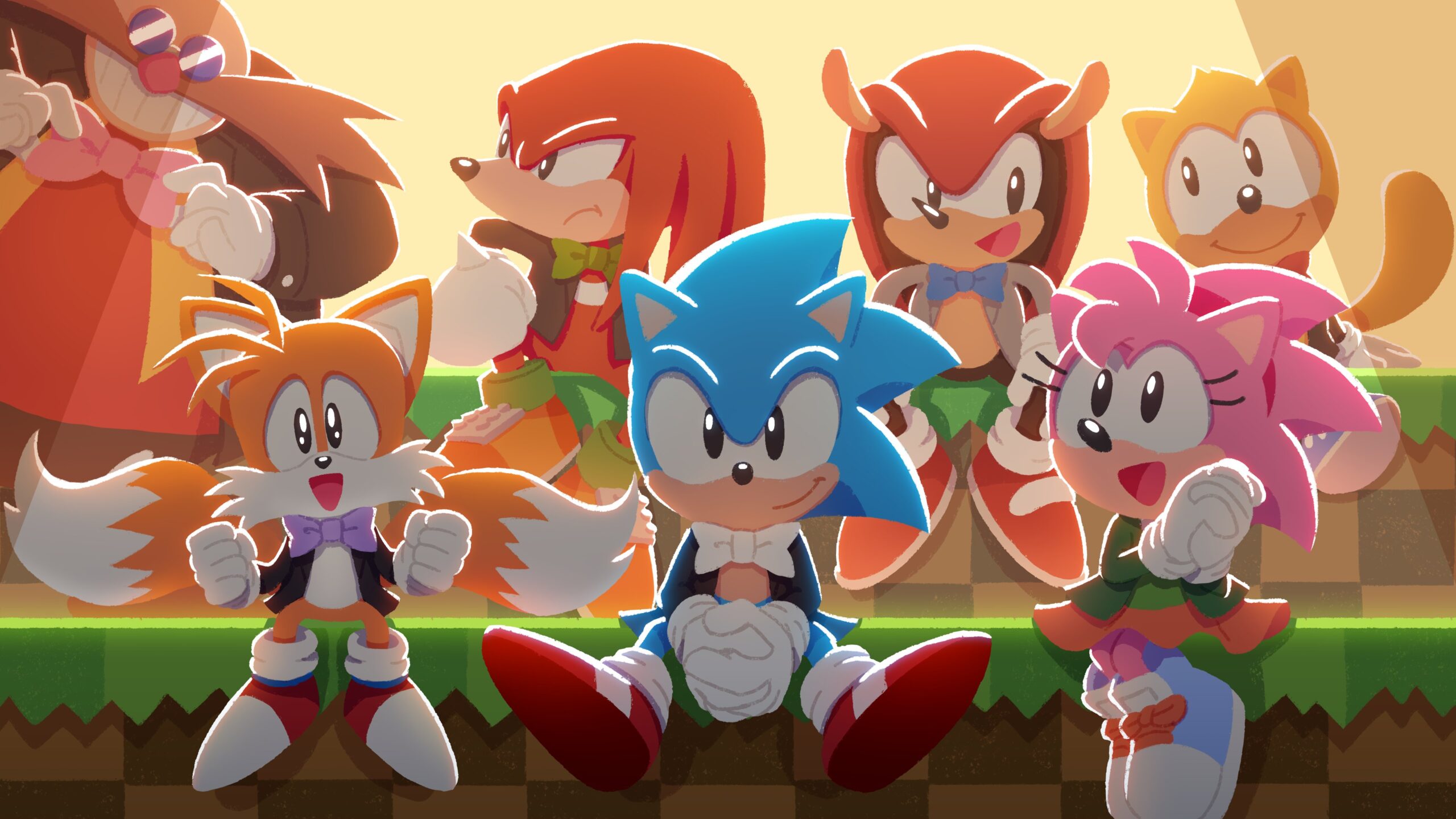 As a celebration of Sonic the Hedgehog’s 30 anniversary, Sega live-streamed a symphony event on June 23. In this article, I will be summarizing what went down in this performance, what music was playing (though I may be wrong with my guesses on what certain songs are during the medleys), who performed it, and any news announcements (if any).

If you wish the download mp3 versions of the music as well as the entire symphony without the intermission, you can go to this folder right here.

The live stream began with a 15-minute timer before the orchestra began. It featured out including Eggman, Sonic, Amy, Knuckles, Tails, Mighty, and Ray all in their classic designs and wearing suits fitting for the occasion. The art was by the @SonicOfficialJP. During these 15 minutes, music from Sonic games plays. These songs are “A New Journey” from Sonic Unleashed, the main menu theme from Sonic Mania (Comfort Zone), the instrumentals for “It Doesn’t Matter” from Sonic Adventure 2, the “Sonic Goes UG” mix from the Sonic Gems Collection, a piano rendition of “Fist Bump” from Sonic Forces, the Sonic Generations remix of the theme for Sonic 3D Blast, and the Tropical Resort area theme from Sonic Colors.

After that, the video jumped right to a medley for Sonic the Hedgehog for the Sega Genesis performed by the FILMharmonic Orchestra. It began with the title theme, then “Green Hill Zone,” “Star Light Zone,” “Marble Zone,” “Labyrinth Zone” (The gameplay footage during this segment really highlighted how difficult this zone was and it was absolutely hilarious and fit perfectly with the music.), “Scrap Brain Zone,” “Special Stage,” “Robotnik,” “Final Zone,” “Spring Yard Zone,” and the ending theme. This beautiful medley was arranged by Tee Lopes and Aruto Matsumoto.

Next came Sonic the Hedgehog 2 for the Sega Genesis. It began, surprisingly enough, with the Wing Fortress Zone. After that, it went to the start of the game with “Emerald Hill,” then “Chemical Plant Zone” (I adore the gameplay transition between those two levels. Sonic finds a secret path in Emerald Hill which leads him to Chemical Plant.), “Casino Night Zone,” and the ending of the game. It is a shame that Mystic Caves didn’t make an appearance in this one but at least the important one showed up (and by that I mean Casino Night Zone. No, I am not biased. Why would you think that?). The arrangers for this spectacular medley are Antonio Teoli and Aruto Matsumoto.

On to one of the most beloved titles in the Genesis-era of Sonic: Sonic 3 & Knuckles. The medley began with, of course, the opening to the game. It then moved on to “Angel Island Zone Act 1” and then finally “Sky Sanctuary Zone.” I’m a little disappointed by this one as it is quite short. In fact, it is almost as short as the Game Gear Medley totaling about three minutes. On the bright side though, it is still an excellent performance. The arranger for this medley is Jan Sanejko. 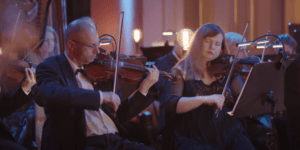 Next is the Sonic SEGA Saturn Medley. It begins with “Can You Feel the Sunshine?” and “Super Sonic Racing” from Sonic R, the “Museum Theme” from Sonic Jam, and “NiGHTS” from the Christmas NiGHTS into Dreams game (YES! YES YES YES YES! Ahem I was….really excited to see this song be featured in this orchestra.). This medley is one of my favorite parts of this entire symphony. This perfect medley was arranged by Aruto Matsumoto.

The classic era is now done for now! The orchestra then begins to play “Believe in Myself” and “It Doesn’t Matter” from Sonic Adventure. It is a beautiful cover and was arranged by Shota Nakama and Falk Au Yeong.

The orchestra then jumps far ahead to Sonic the Hedgehog (2006). It begins with the opening of ‘06 (“Soleanna Festival”), then “Crisis City,” “My Destiny” (Elise’s Theme), and “His World.” This is also one of my favorites as “My Destiny” is a song that doesn’t get enough attention. This segment of the orchestration also comes to show how outstanding the footage gathered for this symphony is. No matter what game, famous or infamous, the gameplay footage makes every single one look fantastic. This fantastic medley was arranged by Jan Sanejko. 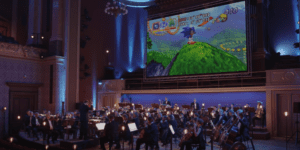 Jumping further ahead comes Sonic Lost World. It starts with the title theme (“Wonder World”), “Windy Hill Zone 1”, and “Sea Bottom Segue.” This is honestly the most forgettable one for me much like the game itself. But I do find it funny how this medley is longer than Sonic 3 & Knuckles’ medley. The orchestration is still good though. This was arranged by Aruto Matsumoto.

After Lost World comes Sonic Forces which starts with “Fist Bump.” After Fist Bump, Infinite’s theme plays which, as we all know, everyone was looking forward to. That’s not me saying it, I can 100% confirm that absolutely everyone was hoping for that theme to appear (Just give me a few minutes to forge a survey to prove this). This outstanding medley was arranged by Aruto Matsumoto and Shota Nakama. 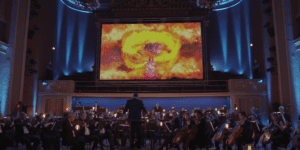 And that was the end of the orchestration segment of the symphony. HOWEVER! This symphony was not quite finished yet. A ten-minute intermission began after the Sonic Colors medley which showed an adorable Chao Garden. Three minutes into the intermission and the composer for the first two Sonic games, Masato Nakamura, makes an appearance. During his brief appearance, he announced that his band, Dreams Come True, is going to be making a lyrical cover of Green Hill Zone sung by Miwa Yoshida. After this announcement, the intermission returns to the cute Chao Garden.

After this intermission, Tomoya Ohtani’s band, which were behind “Reach for the Stars” and “Speak with Your Heart,” appear and perform those two songs from Sonic Colors. The band also does one more song which is “Endless Possibility” which was also by Tomoya Ohtani. But for the vocals of this song, there was a surprise appearance by Nathan Sharp (NateWantsToBattle) who has done multiple Sonic covers in the past which can be listened to in this album.

Following this performance by Tomoya Ohtani’s band and Nathan Sharp, Crush 40 appears! They perform multiple songs in this stream such as “Open Your Heart” (Sonic Adventure), “Green Light Ride” (Team Sonic Racing), “Sonic Boom” (Sonic CD), “I Am… All of Me” (Shadow the Hedgehog), and “Knight of the Wind” (Sonic and the Black Knight). All of these are sung by Johnny Gioeli. The band does one more song after that with “Escape from the City” (Sonic Adventure 2) but, instead of Gioeli providing the vocals, Nathan Sharp sings again.

As the grand finale of the symphony, Crush 40 and the orchestra perform “Live & Learn” from Sonic Adventure 2. It is an outstanding collaboration and an excellent choice to end the stream.

Once the song ends, the credits roll playing an orchestral version of “Friends” from Sonic Mania.

This…was a breathtaking video by Sega. I believe that this has gathered all Sonic fans to unite and agree that…

Sonic is an awesome series with awesome music.

But where was the Sonic Spinball music?