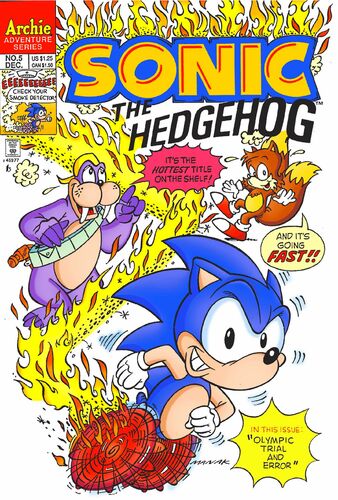 Sonic the Hedgehog is famous for his snarky attitude and speed. However, there have been times where he has lost his ability to run fast such as episode six of SatAM (which is talked about right here). But how will he be able to fight Robotnik with his speed in the comics? What is different this time? Prepare your smoke detectors, ladies and gentlemen, because we are about to explore the fifth issue of the “hottest” comic series.

Our story begins with Sonic playing by himself in a game of baseball. With his super speed, he is able to both hit the ball and catch it before it lands on the ground……why does that sound so familiar? However, as he plays, he accidentally hits a large stadium that he somehow didn’t see. This happens to be the Robotnik Stadium built by Dr. Robotnik. The “bellyness of jellyness” himself (I could not type that with a straight face) has challenged Sonic and the Freedom Fighters to a competition that has been dubbed the “Robotropolis Games.” The conditions are that the Freedom Fighters must win at least one of the four events to return Mobius normal and free from Robotnik’s conquest. If they lose, however, they will be roboticized. 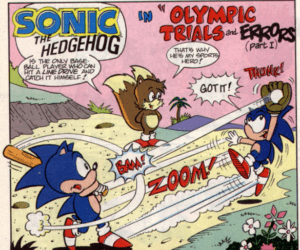 What do the Freedom Fighters think about this obvious trap? Well, they logically think the idea of competing is idiotic and a trap. However, with Sonic’s sheer idiocy and ego, he convinces the others to compete with him saying that, and I quote, “I’ll enter all the events and win!” Antoine also shows off his fencing abilities and proves that, not only is he apparently capable of being useful in combat, he is also good at plagiarizing Zorro by slicing a Z on Boomer’s hat. Tails, unfortunately, isn’t allowed to go so he says he will just watch them compete in the olympics through the…. … “Robotnik Belly Vision.”

…… Angelo DeCesare, the writer of this issue, was aware that revealing this abomination known as the RBV would probably destroy the world as we know it. In fact, I think the earth shook in fear once those three words were first written in this issue. Wish is why he wisely decided to not share what exactly the RBV looks like and makes Tails decide to make a sculpture of Sonic instead as a surprise. 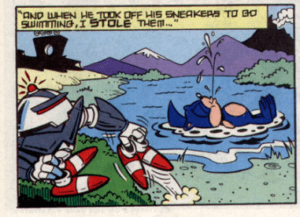 Once the Freedom Fighters arrive at the stadium, one of the Swat Bots informs Robotnik that he followed his order to remove Sonic’s shoes. Now, how did he do it? Well, it’s quite simple really. Sonic took them off while swimming. I have several questions towards this. Why didn’t the Swat Bot capture Sonic? Why is Sonic swimming? And did we HAVE to see a shoeless hedgehog? Anyways, the robot replaced Sonic’s shoes with energy-draining shoes. What does he do with Sonic’s shoes? Obviously, he throws them in the trash. This angers Robotnik as he wanted them displayed in his trophy room with his probably-well-deserved “brat of the year” award.

Before the games begin, Sonic does some warm-ups. It’s then he realizes that something is wrong and he feels incredibly exhausted. However, the games must go on! So Sally, Boomer, and Antoine participate in the events in Sonic’s stead.

The first of the four events is the long jump but it doesn’t matter because, without Sonic, the Freedom Fighters were nothing. Antoine was bested by Splats the rabbit badnik, Sally couldn’t outswim Octus, and Boomer just wasn’t as strong as the Swatbot in weight lifting. What was Sonic doing during all of this? Absolutely nothing. Without his speed, he is useless which is quite a shame since we don’t see Sonic do much to adapt to his lack of speed. But fortunately, Tails happens to be at the Robotropolis Junkyard searching for materials for the sculpture he’s working on. He finds Sonic’s sneakers and rushes to the stadium to return them. 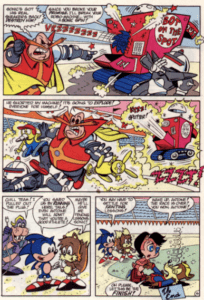 The final event is a race against the Buzz Bomber. Antoine struggles to catch up to the flying bee but Sonic zips by and gives a hand. He puts the badnik back to the starting line and Antoine to the finish line. The Freedom Fighters are now the victors and Sonic destroys the roboticizer that Robotnik brought into the stadium. They head back to Knothole with a fainted Antoine.

We have a page featuring “Sonic’s Ten Second Workout.” Nothing too interesting is featured here except it shows some impressive feats Sonic can pull off with his speed. He can run around the entire world in around three to four seconds.

Chomp On This, Chump!

Our next story begins with Sonic facing his greatest enemy…..Sally’s pancake batter. After some struggling, Sonic, Tails, and Sally manage to get the nefarious batter out of the bowl. Boomer then enters the room with a magazine which has a very special bargain. The magazine was offering a free ant farm. This excites Boomer and he orders one. However, this was a nefarious plan by Robotnik. When Boomer receives the package and opens the jar, it reveals a bug called the Terminite-nator (according to the insect-lopedia). This bug is far more than just a reference to the Terminator. The Terminite-nator is capable of eating anything that is made of wood or paper. But it gets WORSE! This termite grows bigger the more it eats. This is especially terrible as Knothole is hidden inside the woods.

So, how was this situation resolved? Sonic, with his patent-pending “Microwave Speed,” crafted Sally’s infamous pancake batter, stuffed it inside a log, and fed it to the Terminite-nator. This renders the bug unable to eat anything else. Upon examination, Boomer discovers the “bug” was in fact, a robot. I found this detail somewhat confusing as this robot is featured in a book specifically made for bugs. BUT anyways, Boomer reprograms the robot so that it only eats metal and they send it back to Robotropolis in an uno-reverse card fashion. And this concludes issue five of the Archie comics. 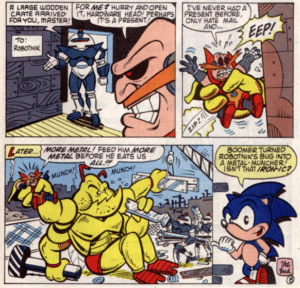 At a Glance: Sonic the Hedgehog (Archie): Issue 5

Summary: Robotnik has challenged the Freedom Fighters to the first-ever Robotropolis Games! Will they succeed in forcing Robotnik to flee? Or will they suffer defeat and be roboticized?