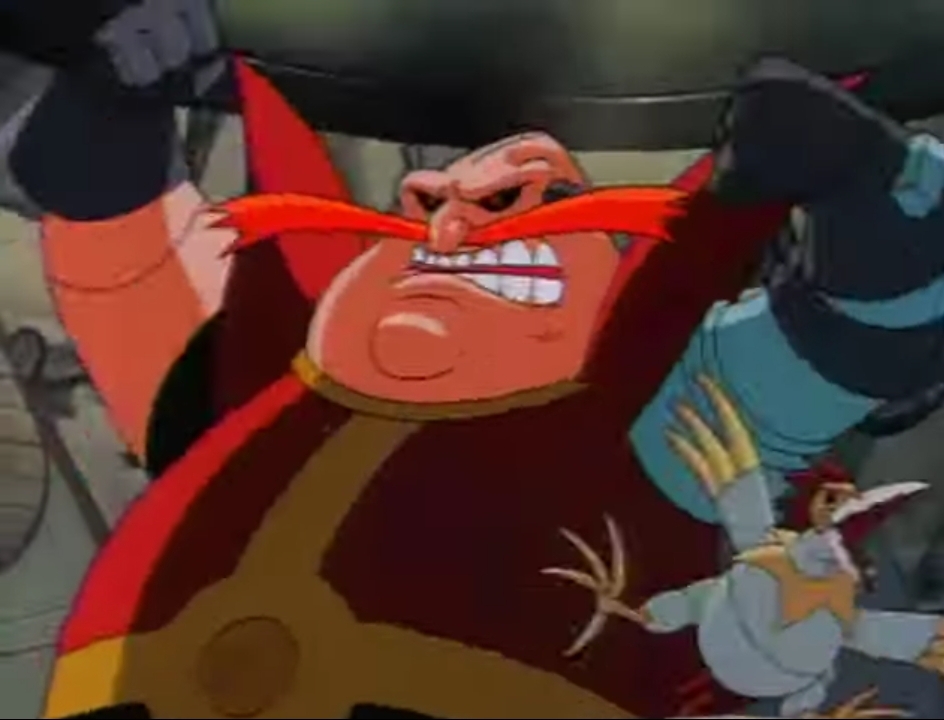 Sonic has always been a fearless hero. There are very few times where we see him legitimately scared. The episode which we’ll be viewing from SatAM happens to be one of those times. Let’s take a look at “Sonic’s Nightmare” which was written by Frank Santopadre and aired on November 13, 1993.

Our story begins with Sonic rushing through Mobius at top speed until he hears Sally’s voice echoing in the distance saying, “Sonic, where were you when the brains were handed out?” Sonic looks into the distance and sees Sally being captured by Robotnik and some swatbots and thrown into a portable roboticizer. As Sonic rushes to the rescue, a storm appears and the blue blur gets stuck in a super stick pile of mud. He manages to break free of the mud and crosses the bridge. As he crosses, however, the bridge collapses and he falls down the pit as the princess’ words echo and a roboticized Sally Acorn emerging from the roboticizer. 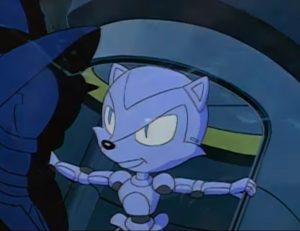 Now I have a soft spot for stuff like this.

Sonic wakes up and realizes it was all a bad dream. He gets up and talks to Rotor for a bit and Sally appears with a transmission Nicole intercepted. The transmission tells the Freedom Fighters that Dr. Robotnik intends on putting chemicals into the clouds to create toxic rain. In order to obtain more information about the plan, Rotor gives Antoine, Bunnie, and Sally swatbot disguises and they move out.

Meanwhile, Sonic finds an abandoned base and decides to investigate. He finds no one and decides to find Sally and the others. He finds the tracks of the vehicle transporting the cloud burster and finds a swatbot helmet that Sonic recognizes to be Antoine’s.

Sally and the others are moved to the base Sonic just finished investigating. Why he didn’t notice Sally and her comrades is be 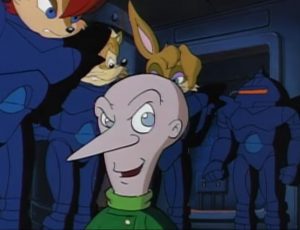 yond me. When he runs to the Freedom Fighters, Robotnik sends out a chasing fireball. In order to stop it, Sonic hops into the ocean for the fiery ball to be quenched.

One of the things very common in Sonic’s personality throughout the franchise is his fear of water. In the SatAM show, this fear seems to be nonexistent. He is then surrounded by Swatbots. He backs away and eventually steps on some mud and pretends to be stuck. He then catches the machines off-guard and defeats them. This seems to be a reference to the beginning of his nightmare at the start of the episode in which he was stuck in some mud. He finds the three Freedom Fighters locked in an egg-shaped capsule and is about to break them free when he is warned not to because of the electric bars. Sally tells Sonic to take care of the toxic rain that Robotnik is about to be released. The hedgehog tries to figure out how to stop the cloud burster but eventually HAS A MENTAL BREAKS DOWN and flashes back to his nightmare.

I honestly did not see this coming in this episode. They were definitely aiming for a darker tone for this one and I LOVE IT. ANYWAYS!

The flashbacks are repeating the phrase “Where were you when the brains were handed out?” and Sonic lets out a scream of panic and wakes up. The nightmare has been telling Sonic to do one thing: to use his brain. Sonic then strategizes and then digs straight down like a drill using his super-speed and finds the machine that powers the well. Using his super-speed to power the gears, the pipes spew out oil at the flying cloud burster and it crashes with Robotnik and Snively inside…

Or so the Freedom Fighters thought. Just like the Secret Scrolls episode, Robotnik and Snively fake their deaths but this probably won’t affect future events since their previous fake death didn’t affect the story. As Sonic figures out how to free the prisoners, the base begins to sink into the water. Sonic hands Sally the power ring which will hopefully drain the power of the bars. Sally holds the power ring against the bars and they deactivate. Sonic and the others make a quick escape and thus concludes episode 10.

This was probably my favorite episode out of Season 1 so far. I am a fan of dark stories and they were going for that here. I hope to see that in the next episodes of this show. 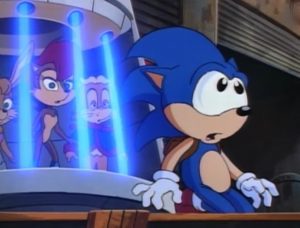 At a Glance: Sonic’s Nightmare

Summary: Dr. Robotnik is preparing the Cloud Burster which will fill the air with poisonous gas! Will Sonic and his team stop him? Or will they suffocate?