Well, after 7 years, we finally got a new Sonic kart racer. But how's it stack up to the previous game? Find out in the review~

Sega initially insisted Team Sonic Racing wasn't a sequel to the All-Stars Racing games, but it's still a kart racer from the same developers, so comparisons are innevitable. I think Transformed was one of the greatest kart racers ever, so how does this game compare? Well the scope of this game does feel scaled back in comparison. This is straight kart racing, so no flying or boating this time around. The roster focuses singularly on Sonic characters, which I find a bit less exciting than being a general Sega celebration. There's only 15 characters in this game in comparison to the 20+ in Transformed, not even counting DLC and platform-exclusives. Danica Patrick fans will be disappointed to find she's nowhere in sight.

Transformed had 20 tracks, each with their own unique theme. This game, in turn, has 7 track themes, each with 3 different tracks, totalling 21 unique courses. It's an effective way to get more out of less. Course design is solid, each track having its share of unique hazards, branching paths, and secret shortcuts. Nothing to complain about there. 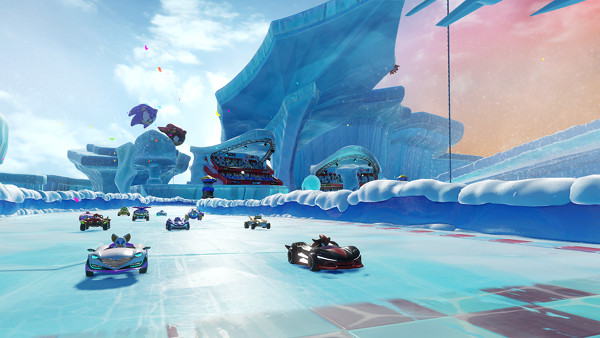 Controls are tight as ever. Transformed fans should feel right at home with its drift mechanics and mid-air flipping. The physics can get a little screwy with collisions, however. It can be amusing if not frustrating, but it's rare enough to not be much of an issue.

The team mechanics are well-realized and actually feel like a core part of the gameplay rather than a tacked-on idea. The game encourages teamwork by weighing the final positions of each racer. So if you place 1st while your teammates lag behind on 11th and 12th, chances are you're gonna lose the overall race. Teams can assist each other by offering up their items, following the race line of the current team leader (which boosts speed), and slingshotting past each other. Teamwork gradually fills up a guage, which activates a temporary super mode.

Each of the three character types have their own unique gimmicks which can help out the team. Technique types can traverse over rough terrain without slowing down. Heavy types can break through walls and open up secret paths. Speed types can do a shockwave type thing to eliminate danger.

Cars can also be heavily customized. Parts are unlocked through a gacha system (no microtransactions involved). Parts can increase/decrease different stats for your vehicles, allowing them to handle however you want. You can also customize your paintjobs; changing colors from set palettes, adding decals, even selecting the materials the car is made of. There's plenty of freedom to make your cars as sleek or as garrish as your mind can imagine. 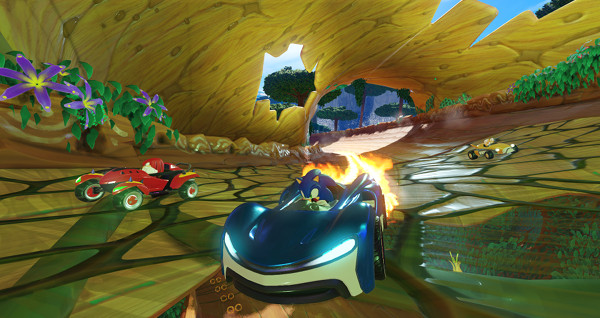 The singleplayer is essentially a series of different challenge levels glued together with some dialogue, which is voiced at least. The story has a little bit of intrigue and gets the job done well enough. And it still offers more than some Kart racers on the market. Then length is somewhat long without overstaying its welcome. Just playing straight through should last maybe ~10 hours, but completionists can spend longer getting full star ranks, unlocking keys, and playing higher difficulties.

However, your AI teammates only seem to be about as good as you are and will generally hover around your position. You're not going to see a long stretch of race where an AI partner is up in 2nd while you're back in 9th. This can be a problem racing as a heavy character, as their slower speed can cause the whole team to lag behind. It feels like the speed-based characters are the most viable option in single-player due to this, aside from certain challenge level variations. For example, technique characters have a higher ring-collection range, which makes them better suited for the ring challenge levels. 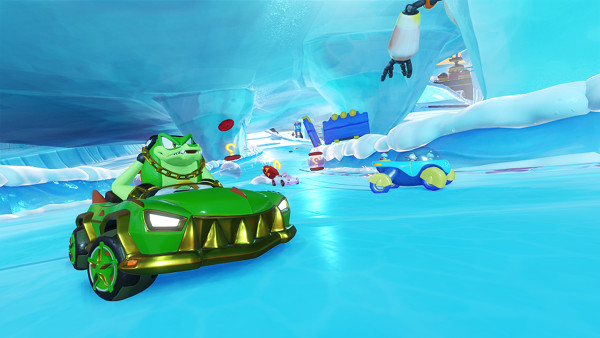 Online has a number of issues, though. It seems quite difficult to get a big game going; I could only get a party of maybe 4 going at most. The rest of the vacant spaces are filled in by AIs. The game won't connect you to a lobby if a race is in progress, and lobbies are only open for a minute at a time. This means lobbies are rarely open and matchmaking will most likely create a new lobby for you, in which only a few people will be able to connect to within the minute. Impatient hosts can cut that minute even shorter. People have also had many issues with network errors kicking them out of games. It definitely needs some updates.

All in all, Team Sonic Racing is still a solid kart racer. However, fans of Transformed may be disappointed in its smaller scope and singular focus on Sonic. And if you're mainly interested in racing online, maybe hold off for a few patches. But if you're into singleplayer, time trials, and maybe even local multiplayer, it's not a bad pickup as it is now.

(Also, per usual, the PC version uses Denuvo. Bare that one in mind…)