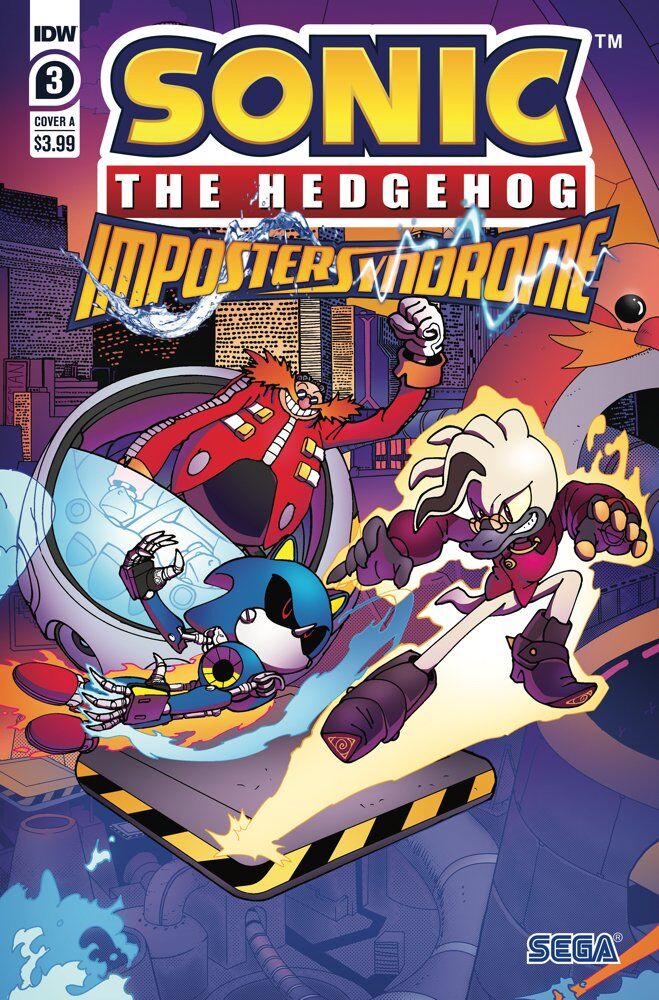 Surge and Kit have accessed a computer and begin watching Dr. Starline's logs. The first one they watch shows Starline immensely angry, and seemingly mentally unstable, over getting fired by Dr. Eggman. He stated that he will make him see his side by finalizing a frame that he built. He was initially going to show him the concept but now instead wished to give a live demonstration, even though it was not yet finalized. He stated that the prototype would exceed the creations of Eggman's Badniks and Metal Sonic. In the next recording, at a point after claiming Starline Base Sigma, a more sane and collected Starline talks about how he believes Eggman lacked introspection and revision, resolving to embrace these things to surpass him. He mentioned that his time with Zavok showed him that his plans were initially short-sighted; all the power and obedience of a machine meant nothing in the chaotic and unpredictable world he was trying to control. Needing the will and ingenuity of a living being, Starline opted to fuse his designs instead. Unlike Eggman, who inserted animals into robots, he decided to take an opposite route in the form of Surge and Kit.

Surge does not take a liking to Starline's constant rambling. Kit asks if he should log out of the computer but Surge says no, wishing to learn more details. After now knowing how they were enhanced, Kit wonders if they should continue going behind the doctor's back, to which Surge states that she will ask for Kit's opinion when she wants it. In the next video log, Starline stated that the cybernetic enhancements were implemented and his base models were finally complete. For specialization, Starline compiled the necessary ingredients to emulate the biomechanical miracles that his adversaries possessed and then installed them into Surge and Kit. He mentioned "emulate" instead of "replicate" because Kit requires external support and Surge requires electromagnetic propulsion. However, he is seeking to improve things anyway, not maintain the status quo. He continued saying that their level of power must be kept under control. Looking to Eggman for inspiration, he retrieved programming from Belle so that he could have the means of fabricating a personality, or rather have the ability to overwrite existing ones. Starline stated that Surge and Kit would think what he wants them to think, want what he desires them to want, and be who he wants them to be. As a fail-safe, Starline made Surge and Kit prone to his hypnotic gear in case they needed realignment. Hearing this angers Surge and shocks Kit.

Both keep watching the recordings, seeing how Starline kept brainwashing them until they behave like he wanted them to, later he states how he used the resilience of the Metal Virus to make cellular upgrades to enhance Surge and Kit's cybernetic implants, causing the two of them becoming resilient to pain. However it turns out that the constant testing Starline put them through caused them to develop emotional trauma due to the constant failures, forcing Starline to keep using his hypnotic gear to deal with it, despite this both Surge and Kit were still able to learn and improve from each failure, this unfortunately made Starline still subject them to more of his trials, much to Surge's anger. Surge demands Kit to look for anything about their past, as Surge wants to know who they were due to Starline making them cyborgs, however Kit is unable to find anything about them, which infuriates Surge asking why. Starline appears behind them and reveals the reason he didn't put any information about their past is because he finds it irrelevant, this angers Surge who claims that she doesn't want to be a nobody with everything she ever wanted being a lie.

Starline makes it clear that he has this conversation with her and claims to it always ended up with him brainwashing her again, however both Surge and Kit attack him, Starline is able to knock down Kit and uses the Tricore to fight Surge, when he thinks he took her down, she reveals that he made the mistakes to give her fast healing and to ignore Kit, using his water tendrils to grab Starline while Surge steals his Tricore, Starline tries to bargain with them claiming that he's the only one who knows their past and only he can maintain their cybernetic enhancements, however Surge uses the Tricore to keep him quiet. Kit asks what they'll do now, Surge finally breaking down states that the two will burn Sonic, Eggman, and anyone who follows them, so they can get rid of all heroes and villains, in her eyes "If we don't get a past, they don't get a future". Kit asks how they will do that, Surge first wants to deal with Starline but asks Kit what's in his mind, Kit reveals that Starline already planned to bring Sonic, Tails and Eggman together, so they will take his plan and use it to destroy Sonic, Tails, Eggman and Starline, Surge sees that this was Starline's intention all along to claim responsibility for everything, admitting she can work with that.

Starline wakes up in confusion, asking what happened, Surge lies and says that Starline fell asleep while telling about the details on their next mission, with Starline asking if both Surge and Kit are fine with this, the two claim that they are fine as Surge doesn't mind destroying Sonic and Kit is fine with everything she does. Starline now calm, assuming he fell asleep due to his schedule, not knowing that it was caused by Surge and Kit, explains the mission is invade Eggman's new capital city while he's rebuilding so he can upload his override program, Surge asks if she can scramble the robots, only for Starline to remind her that their mission is to pacify Eggman, their terminal targets are Sonic and Tails. While Starline explains his intentions are using the invasion of the capital city to attract the attention of the Restoration, using the Badniks as ancillary support so Surge and Kit can focus on Sonic and Tails to eliminate them, not realizing that both Surge and Kit are planning to eliminate his organization too.

Sonic The Hedgehog #48 Sonic the Hedgehog 2: The Official Movie Pre-Quill