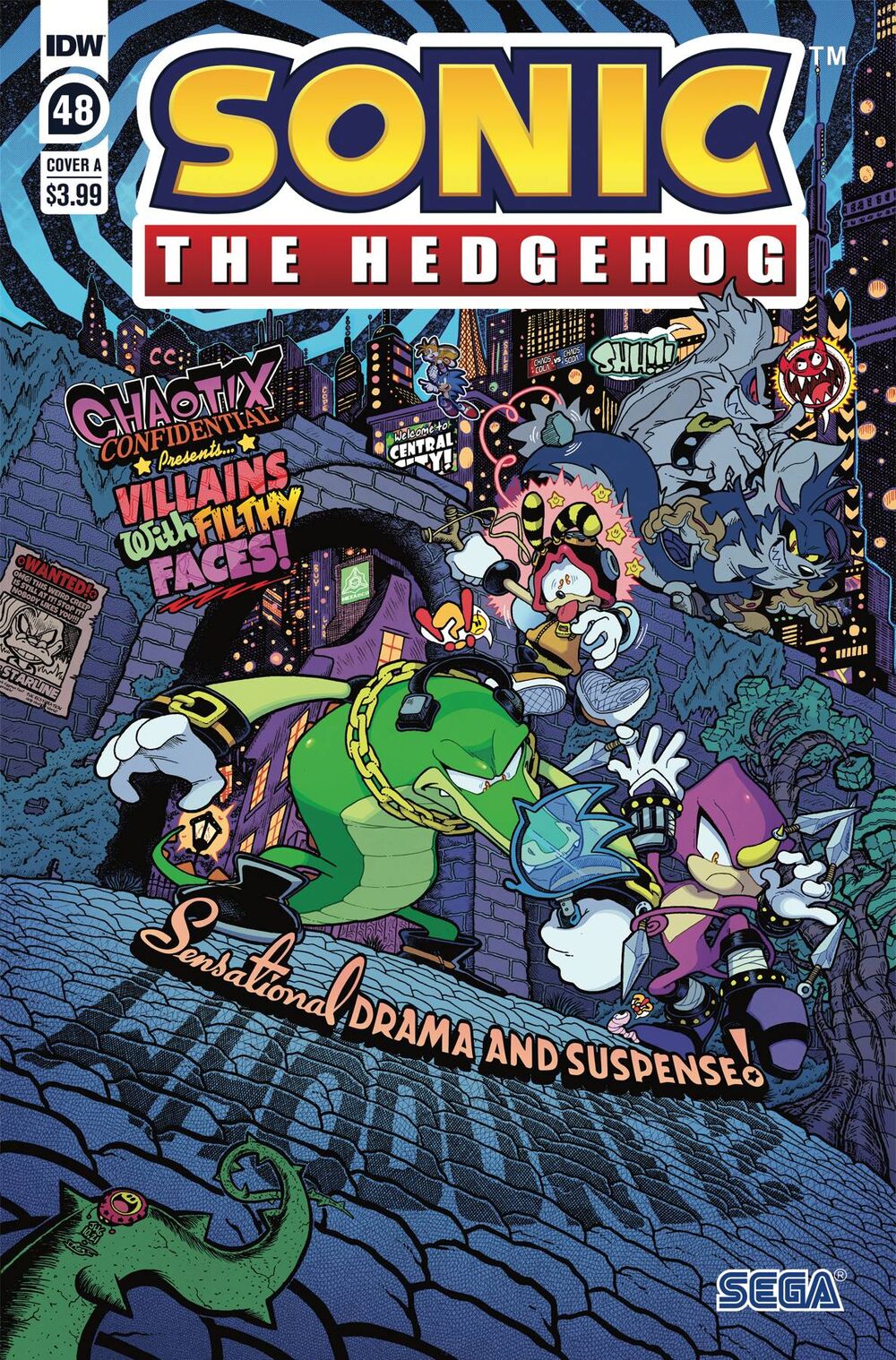 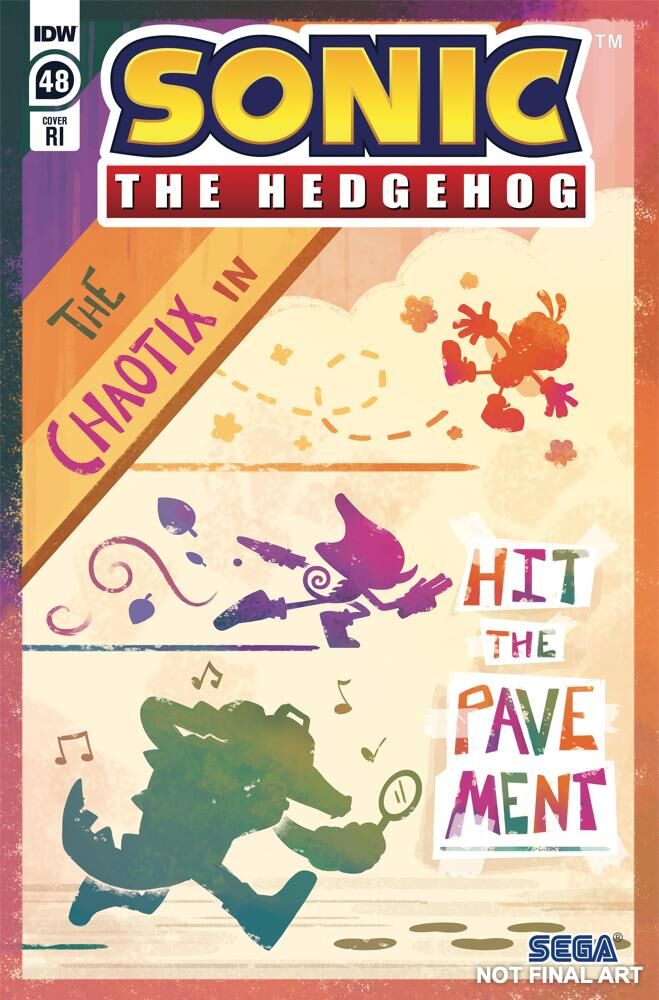 Nite is finishing a K-TBR 199.2 broadcast for the day with Charmy as his guest co-host. Vector and Espio arrive at the station to pick Charmy up and they are greeted there by Don. He invites them inside where Nite and Charmy have finished their session. The pair greet them, with Charmy excitedly asking his teammates if they heard him over the radio. He begins to talk about how he wishes to return every night, only to fall asleep in Vector's arms halfway through his sentence. The crocodile thanks the K-TBR 199.2 crew for watching him. According to Espio, the reason they left Charmy in their care was so that they could return library books as the bee was banned for life from there but telling him this would break his heart. Nite lets Vector know that he received a few calls from Central City that they may want to look into, with a potential case involved. Vector tells him that they are always interested.

Later, as the trio are stuck in traffic, Espio brushes up on the reports given and likens the case to a bad thunderstorm instead of a simple crime. Vector defends Nite in saying he usually has a good nose for these things, with Espio bringing up the fact that he has also led them into trouble, which does not get them paid. Vector claims that once they figure out what is happening, someone will surely come up with a reward for them. A sleepy Charmy asks if they have arrived at the city yet. Not wanting to miss another case because of traffic, Vector drives off-road and asks Charmy to carry them to the city instead; as a reward, he will give him ice cream later. Charmy happily does so; as he carries his teammates into the city, a driver angrily accuses them of "cheating" but Vector states that he is just jealous that he did not think of it first. In the city, the Chaotix realize that the scene of the chaos looks rougher than what was described on the news. Vector approaches arguing drivers whose cars collided with each other and is told that there was an electrical surge, causing the city to go haywire. The Chaotix soon find themselves surrounded by several citizens, asking if they are here to help them.

The detective trio realize that this is more unhelpful than anything as everyone does not seem to have an idea who or what caused the surge. An elderly man interrupts, claiming to know the culprit. He states that he saw the person, who he describes as a "mutant monster crocodile", come out from the sewer. Charmy is intrigued by this while Vector and Espio are not as easily impressed. However, as it is their only lead, Vector says that they might be able to see more under the street. Heading into the sewers, the detective crew find wiring and pipes quite damaged. Vector notes how tough the person must have been to do the damage and says he is almost glad that they are long gone; Espio jokes that there is a crocodile right here, leading Vector to dismiss him. The group hears water splash around and Charmy alerts the others to a shadowy figure carrying a crate some distance away from them. They give chase to the figure, with Espio throwing shurikens and Vector throwing Charmy. The figure dodges these attacks and rushes inside a small passageway. Charmy leads the other two to the tunnel and attempt to follow the figure, only to be slowed down by the darkness and the intense stench of the area. Espio suggests a tactical retreat and the others comply.

Outside the tunnel, the Chaotix discover that the figure had dropped the crate that they were holding. Inside the crate, they discover scrap metal of Badniks, which Espio does not have an understanding of who would want it. However, Vector finds a piece of wood that says "Central Shipping Yard", giving them a clue. The Chaotix go to the shipping yard but find no one around; Vector guesses that this is due to all the roads being plugged up, leaving there no reason to work in the shipping district. The crocodile suggests splitting up to look for whatever it is that they are looking for and gets annoyed with Charmy once the bee states that he wishes to go with Espio as Vector still smells from the sewer. However, when Espio asks if the smell followed them, Vector realizes that he is correct, meaning that they must be on the right track. The trio tail the odor to an abandoned warehouse. Charmy nearly loudly alerts anyone nearby, only for Vector to stop him. Espio listens closely to the warehouse and hears voices inside. He decides to turn invisible and take a look inside incognito. Vector tells him to give them notice if he is in trouble. Espio sneaks into the building and watches a conversation between Clutch the Opossum, Rough the Skunk, and Tumble the Skunk from a scaffolding.

Rough was doing work for Clutch when he ran afoul of the Chaotix but managed to slip away from them using his Stink Bomber. He was not able to deliver the crate, with Tumble deducing that they probably cannot use that exit out of the city again. Clutch is disappointed with this news as it was their only route for moving cargo and it was now defunct because Rough was spotted. Rough and Tumble defend themselves by saying that sneaking around is not easy and Rough did not know that the Chaotix were going to be there. Rough adds that the trio are not pushovers. Clutch states that he hired the skunk brothers because he needs help he can rely on and trust. Looking around at his collection, he mentions that it is everything he could salvage from his home before it was confiscated. This led him to be stuck in Central City with no way out of the city to his buyers due to the whole city being turned upside-down and all because Rough was spooked by the Chaotix, who were not even looking for him. He threatens the skunk brothers by asking if he should show what happens to those who disappoint him. Espio accidentally makes the railing of the scaffolding creak, leading Clutch to immediately shoot in his direction with his cane. Once Clutch continues shooting at Espio, he whistles with his hands. This leads to Vector breaking down the doors of the building with his voice.

Clutch has Rough and Tumble take on Vector and Charmy. The crocodile begins making his own rhymes after hearing what the skunk brothers had to say themselves but gets sidetracked by Charmy. Clutch attempts to slip away but is stopped by Espio; the chameleon asks him who caused trouble downtown if it was not him. The fight is called off by Clutch who is led out by Espio. He tells his teammates that Clutch and the skunks had nothing to do with the power failures and were not actually their target. Seeing as they were not innocent either, Vector asks for introductions. Clutch explains that he was a popular Chao racer at White Park but soon lost his home to a bunch of "do-gooders". However, he sees this as a wake-up call as there was a whole new generation of heroes out there that he has never tricked, swindled, or beaten. Due to this, he is determined to rebuild his empire and amend this. He notes that it is a small start but someone out there is always looking for weapons. Hearing this, Vector powerfully smashes the ground, causing all of Clutch's Badnik hoard to fall into the water below. After being told that he is not being let go, Clutch reveals that he has two of Espio's smoke bombs. Clutch uses them and quickly grabs Rough and Tumble upon exit but tells the Chaotix to spread the word of his return before leaving.

Espio apologizes for failing but Vector dismisses it as they did not know what they were getting into. With this, Charmy asks who actually messed up the city. Vector notes that the trail has gone cold, meaning they have to wait and see what happens next.