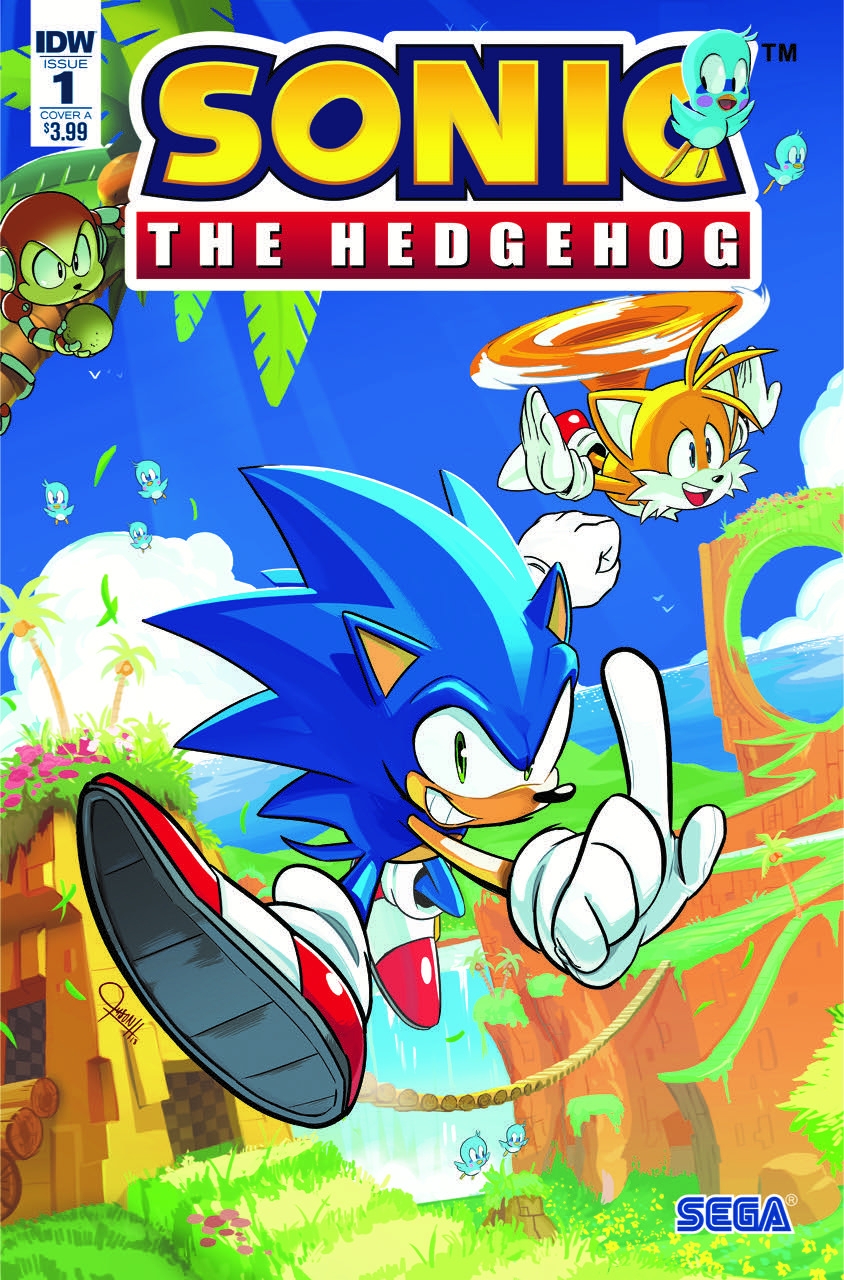 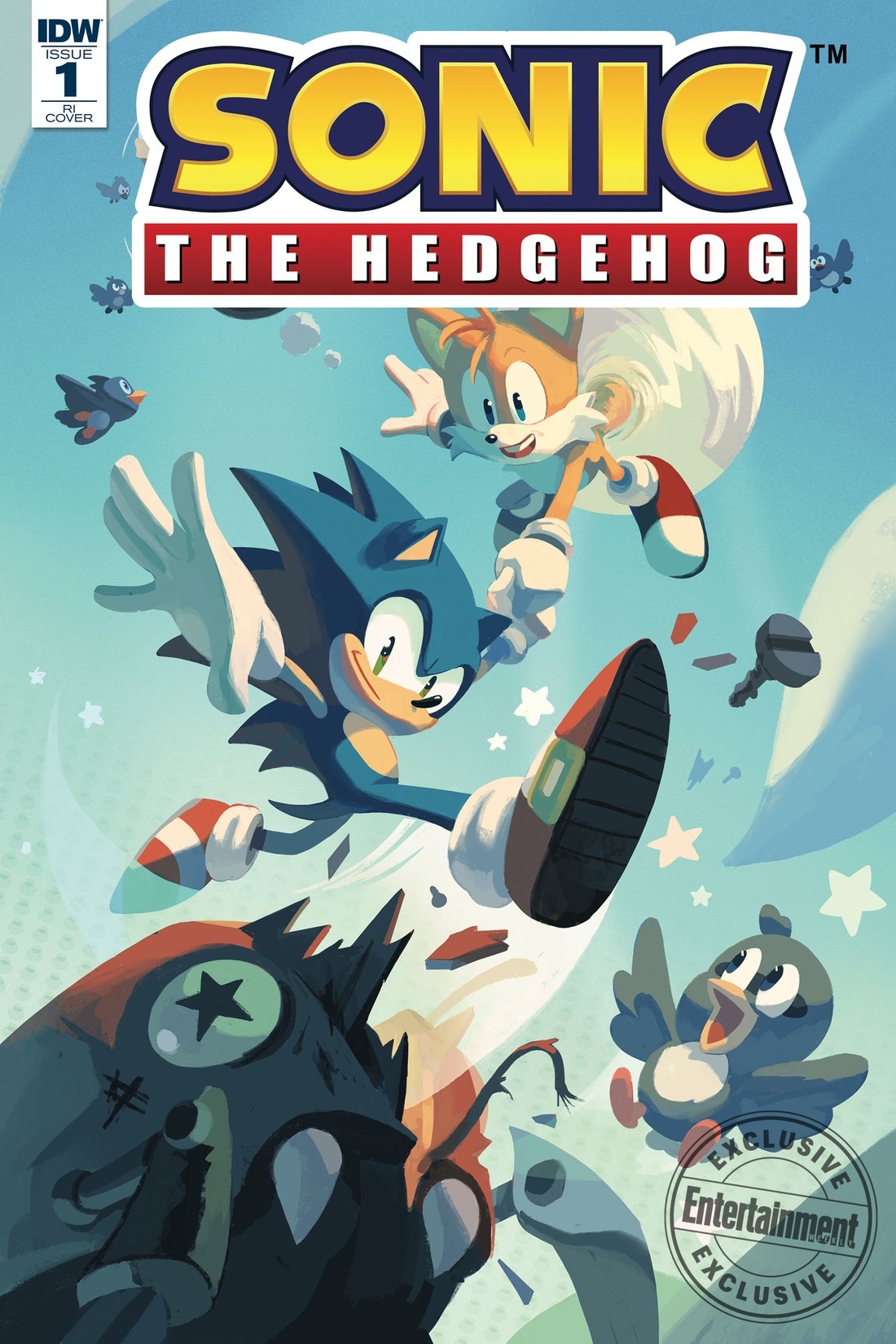 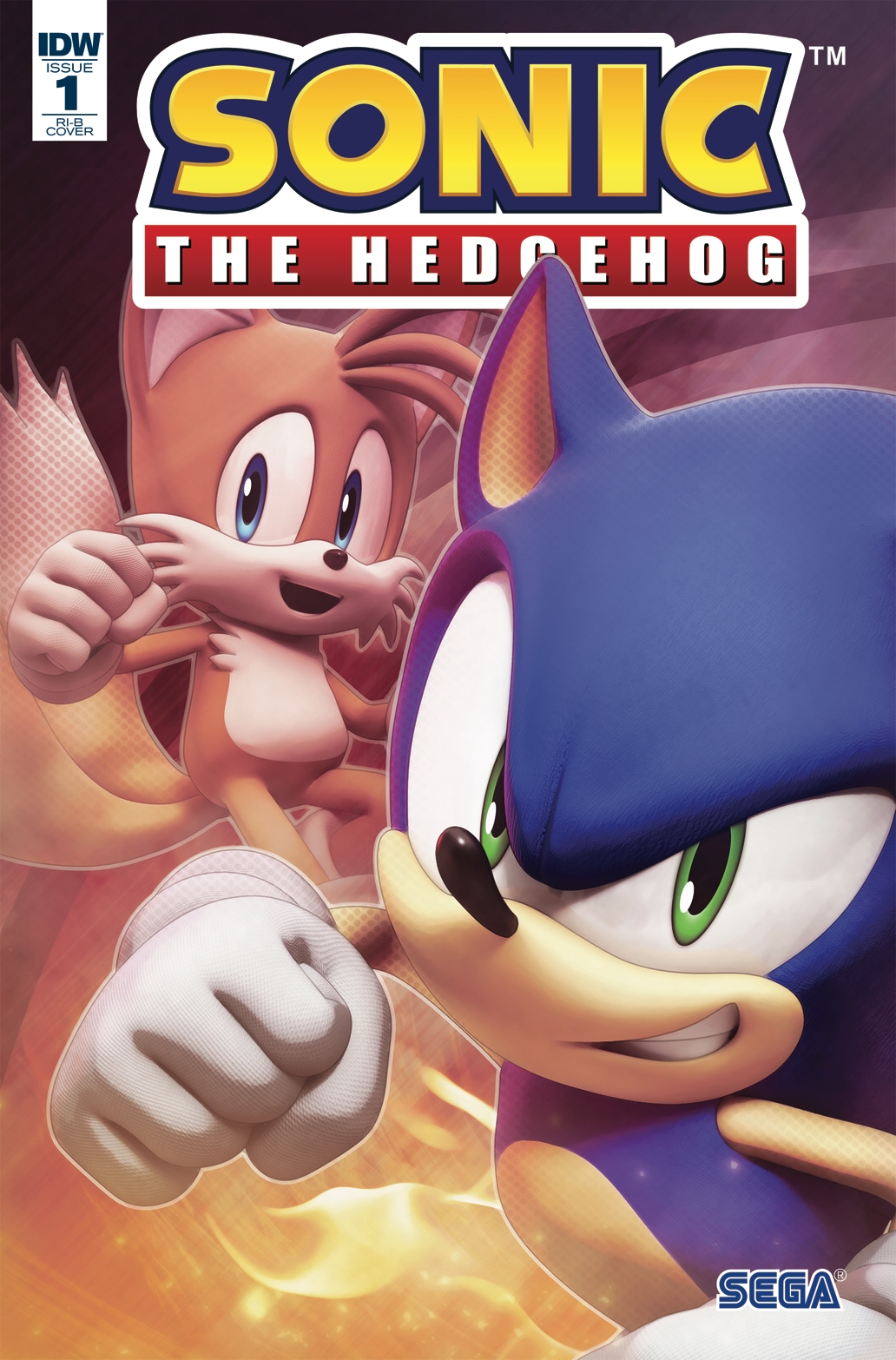 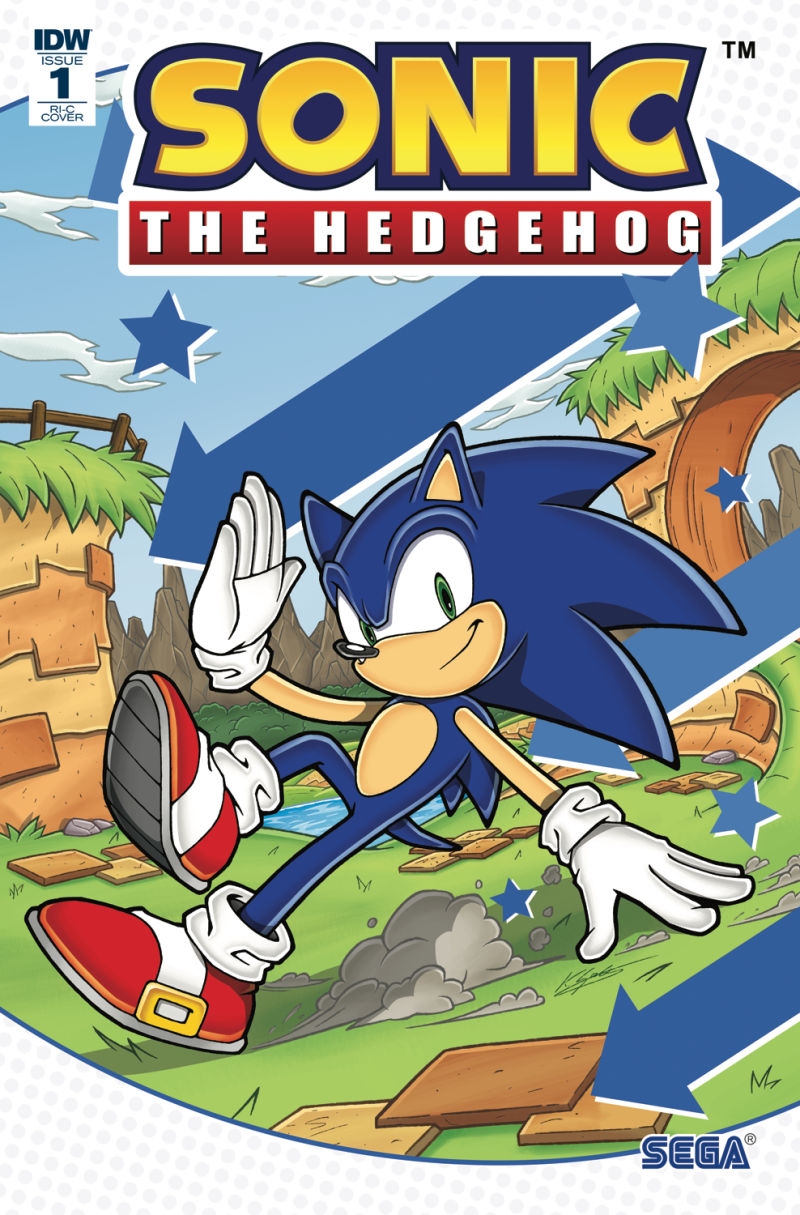 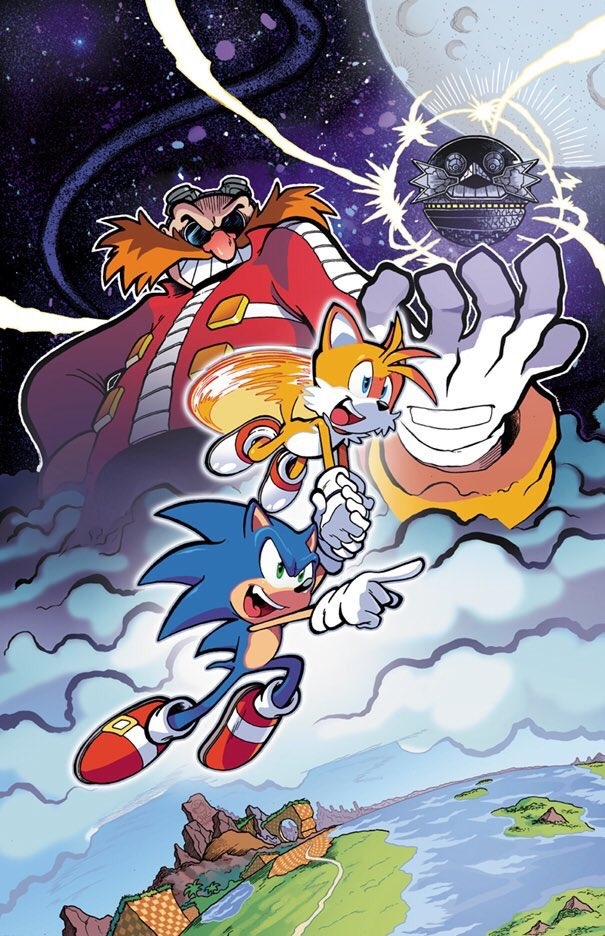 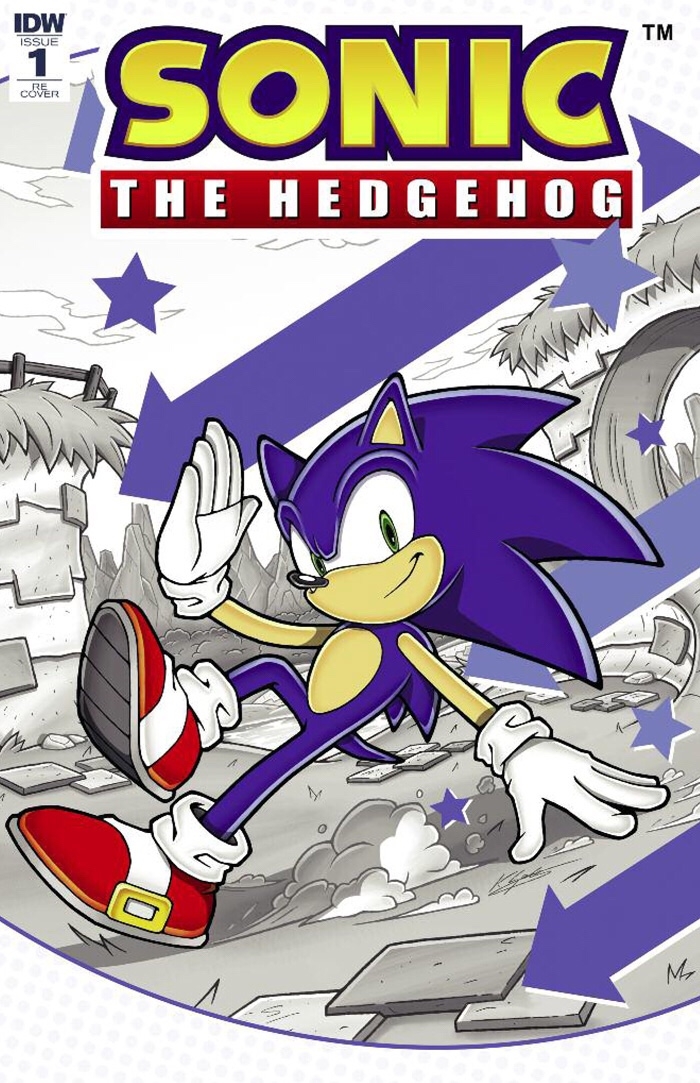 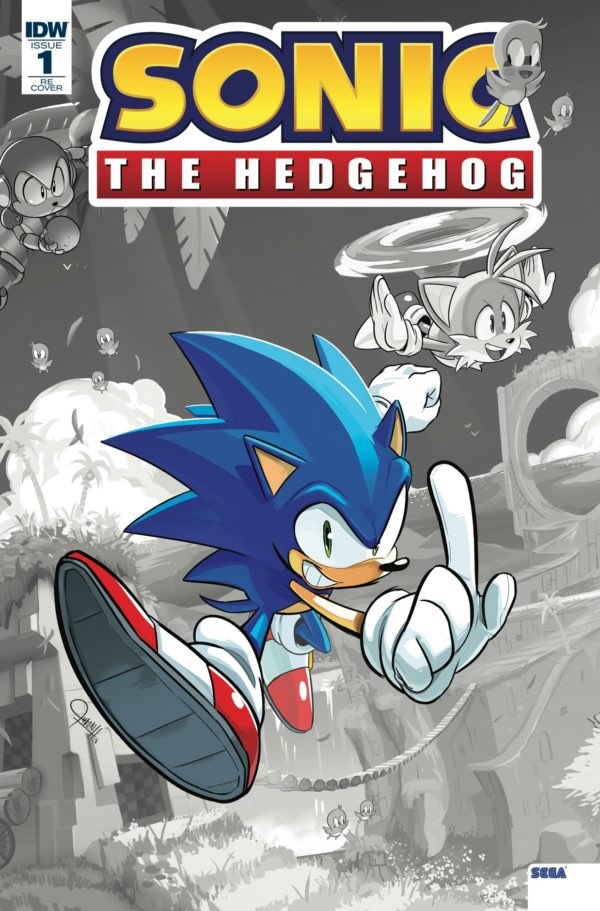 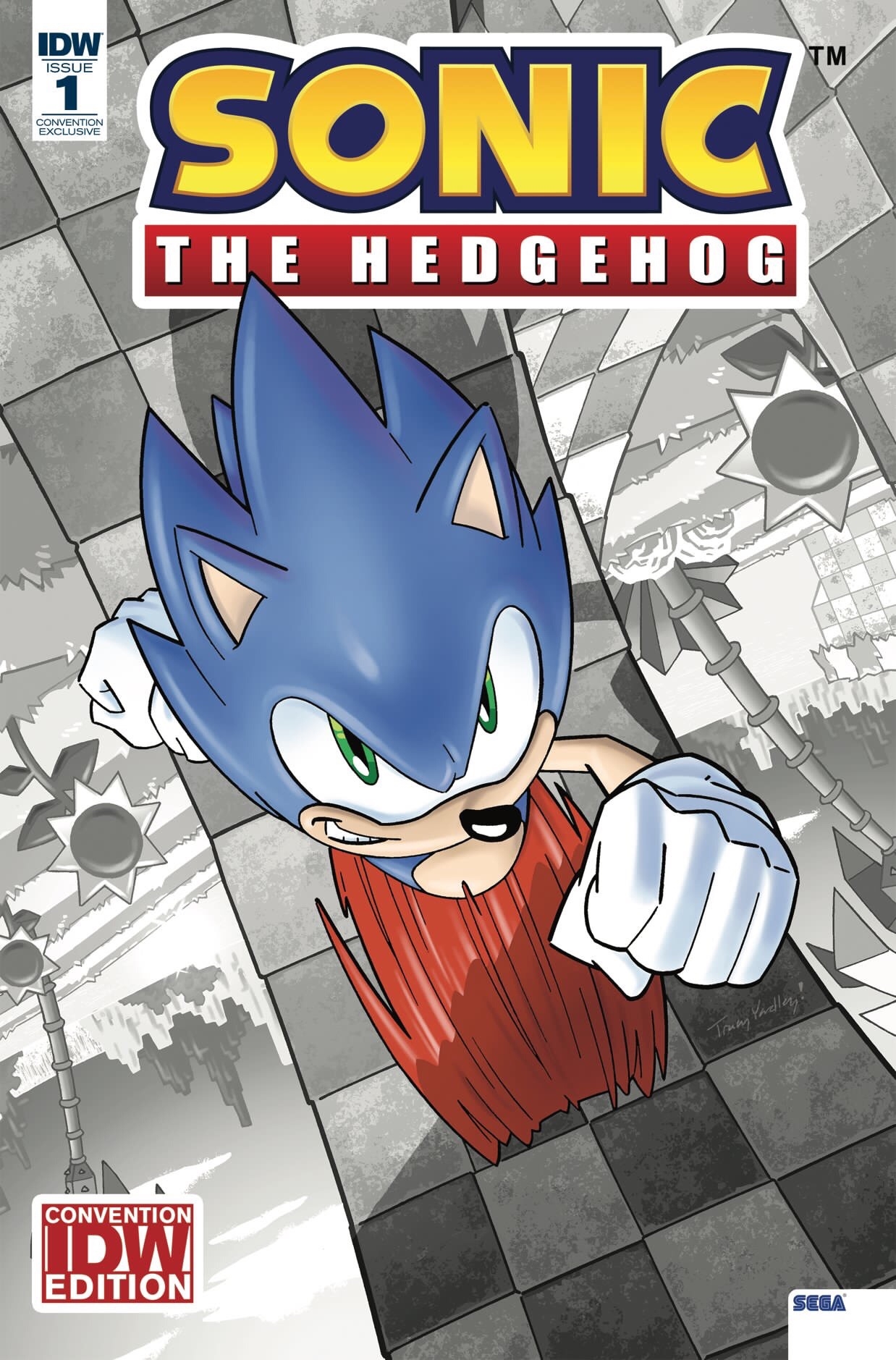 SONIC'S RACING INTO A NEW ADVENTURE! After defeating the evil Dr. Eggman's latest plot, Sonic is racing around the world to shut down the robotic Badnik forces that are still attacking villages. But it's a big job for one person-even Sonic the Hedgehog! Fortunately, he'll have some help from his best friend: Tails!

Note: This has been released early at WonderCon on March 23, 2018

The issue begins with an introduction to the series: it explains that for years, Sonic the Hedgehog has been battling the forces of Dr. Eggman. Every time the mad doctor has attacked, Sonic has showed up and thwarted his schemes, then relaxed until Eggman made his next move. After their last battle, however, Dr. Eggman had vanished, but his Badnik Horde has not.

Back in the present, Sonic sees Vista View under attack by Badniks, whom the locals are trying to fight off, which prompts Sonic to head in and see if they need a hand. Inside the town, a resident armed with a Cube Wispon tells the others to get to their storm bunker. The resident nervously tries to take a stand against the invading Egg Pawns but is easily knocked down. Before the Egg Pawns can get him though, Sonic shows up and takes the Egg Pawns out. Helping the resident back on his feet, Sonic gives him back his Wispon and tells him to swing it at the robots next time, adding that he knew somebody who put it to good use. Sonic then takes off in a hurry to rescue the rest of the town, advising the resident to hide indoors. Soon after, Sonic stumbles upon the Vista View's militia and tells them that Badniks are coming from the north and to go help the resident he just helped. Caught off-guard, the militia nonetheless agrees. Meanwhile, some Motobugs are about to get a pair of townspeople who are struggling to open the shelter. Fortunately, Sonic takes out the Motobugs, then winks and strikes a cool pose in front of the townspeople before taking off again. Calming down, the townspeople are left star-struck by Sonic's coolness.

Next, Sonic comes across a Super Badnik: an Egg Hammer. Not rattled in the slightest, Sonic forces the Egg Hammer back with some Spin Attacks. As he gloats at the Egg Hammer to goad it into attacking him, however, he notices that he is surrounded by three more Egg Hammers. The Egg Hammers take a unified whack at Sonic. However, Sonic soon after emerges from a manhole, smugly revealing that he used the underground system before the Egg Hammers could hit him. Sonic then runs away while the Egg Hammers chase him. Before one can hit him with its hammer, Tails swoops in and pulls Sonic away. Landing on a building, Sonic thanks Tails for the save and informs him of Vista View's status. He reveals that he has taken care of the small-fry Badniks and that the town militia can handle the rest. However, the Egg Hammers still pose a threat. Sonic and Tails thus decide to destroy them together and use the Rolling Combo to split an Egg Hammer in half. The both of them continue their collaboration from there and manage to take down two more Egg Hammers. Exhausted, Tails thinks this would be easier if Knuckles was with them, but Sonic assures him that they are doing fine.

Tails quickly notices that the rest of the Badniks are making a run for it. Not willing to risk letting them attack other towns, Sonic tells Tails to cut the Badniks off while he handles the remaining Super Badnik. With Tails on task, Sonic turns his attention to the remaining Egg Hammer. Smashing its head, Sonic lands gracefully on the ground while the Egg Hammer lands on its own hammer. Sonic then yells to Tails to hurry up, as the Badniks were almost out. In response, Tails casually closes the town gate, causing the remaining Badniks from crash into the closing gate, destroying them. Joining up with Tails again, Sonic casually applauds and praises Tails, which the fox cub humbly accepts.

As the duo take a breather, Tails comments that the Badnik attack was much more coordinated than anything else they have seen lately. He begins explaining that after they beat Eggman and his forces, they broke the Eggman Empire's control over their world. This meant that while the Badnik army remained, they were now directionless and no longer a united threat, and any attack from them seemed more accidental than aggression-based. Today, however, the Badniks acted more like an organized army, which makes Tails deduce that something is making Eggman's army more cohesive. Getting the point, Sonic wonders if it means Eggman is back, but Tails does not think that is the case: after his last defeat, Eggman would undoubtedly make sure Sonic and co. knew he was back, as he always does that.

Whatever the case might be, Sonic decides to keep doing what he is doing, which means traveling around and smashing any Badnik he sees, as they are posing a threat whether they are organized or not. Tails nervously notes that someone could be controlling the Badniks, but Sonic thinks it just makes things more fun. Seeing that Sonic is not going to change his mind, Tails tells him to be careful while expressing his worry over the thought of losing Sonic if he gets caught off-guard again. Noticing this, Sonic cheers Tails up and promises to be careful. Sonic then offers Tails to come along with him if he is so worried. Tails is initially eager to come along, just like in the old days, but upon taking a look around and seeing the town in ruins and the people in despair, Tails notes that there are too many Badnik gangs on the lose and that Sonic will be able to handle them faster on his own. Tails thus decides to stay and help the locals rebuild the Vista View. Sonic comments on Tails' decision by calling him a class act and states that they will bash robots again some other time, to which Tails agrees.

Taking his leave, Sonic runs out of town. Unbeknownst to him, however, a Flapper is surveying from a distance. Meanwhile, somewhere else, in an Eggman-themed base, an unseen figure is watching the Flapper's surveillance of Sonic. Unsurprised that Sonic has survived his first trial, the figure orders the next battalion to attack the nearest town in order to draw Sonic in. The figure also orders his troops to make sure that the Resistance knows of Sonic's latest success, as they want to crush both Sonic and Amy Rose in one strike.