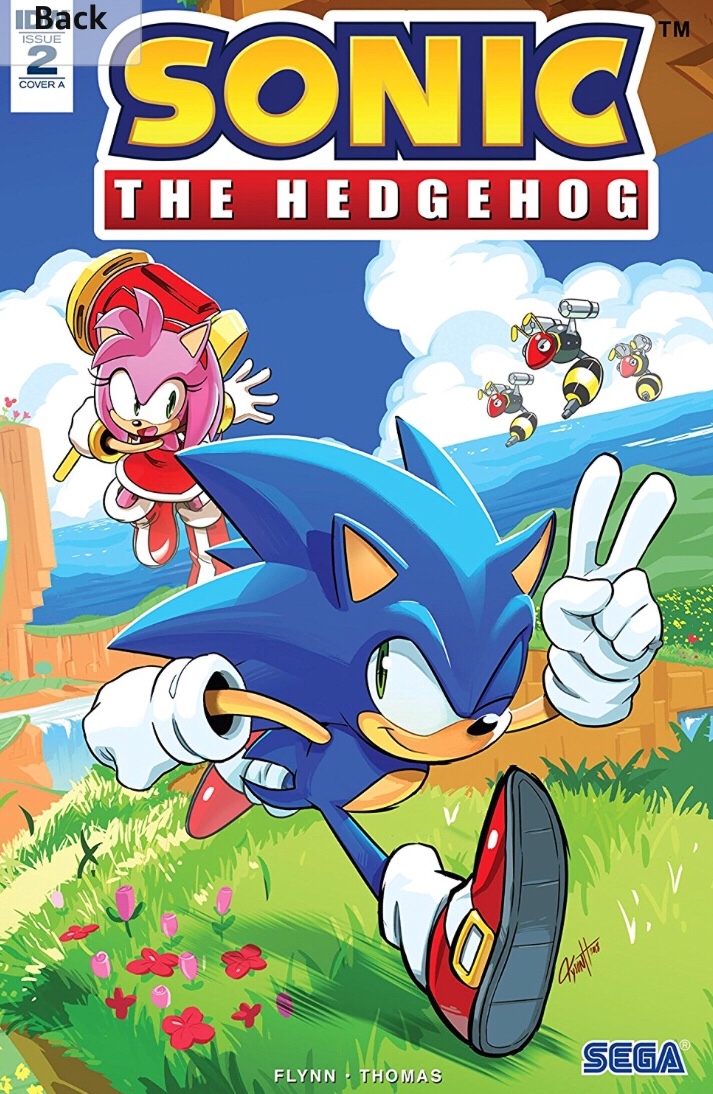 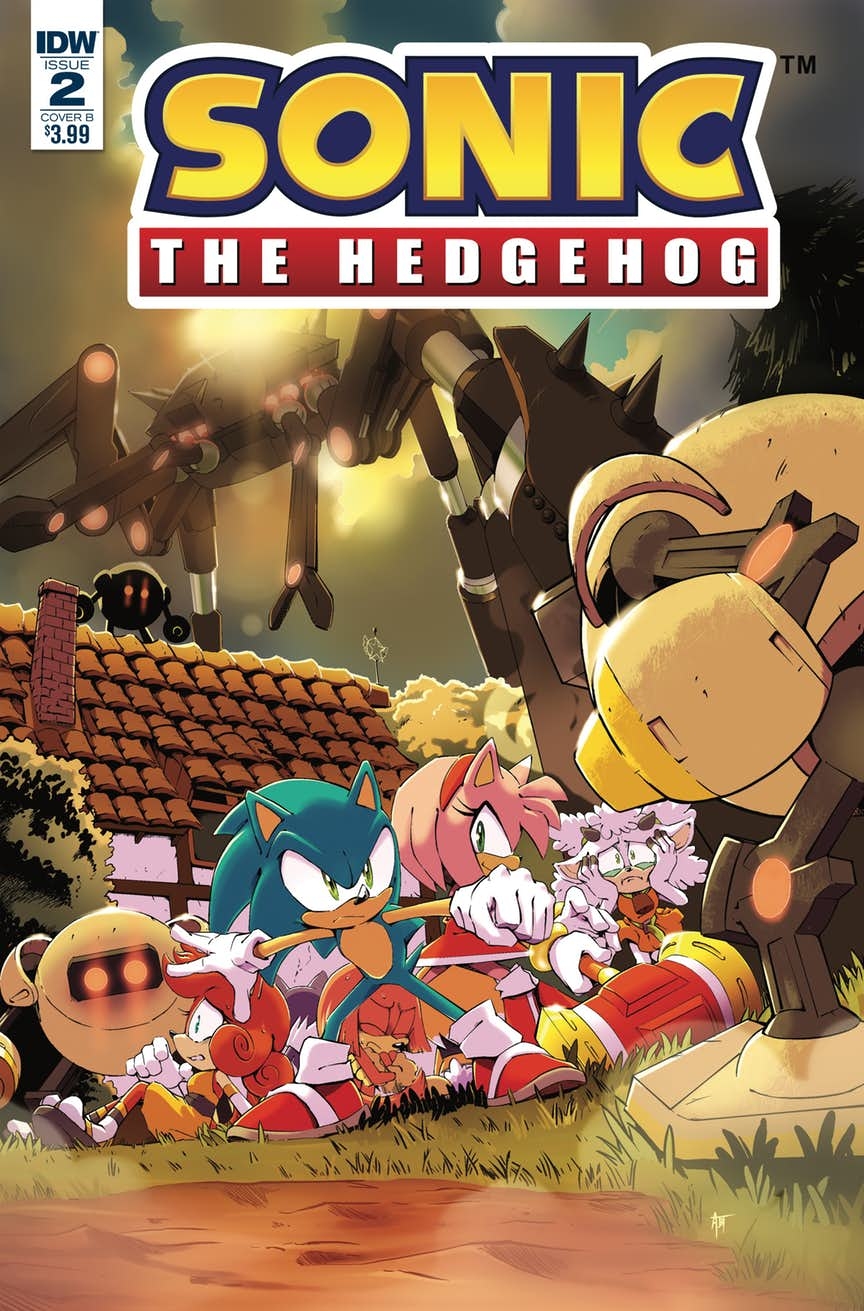 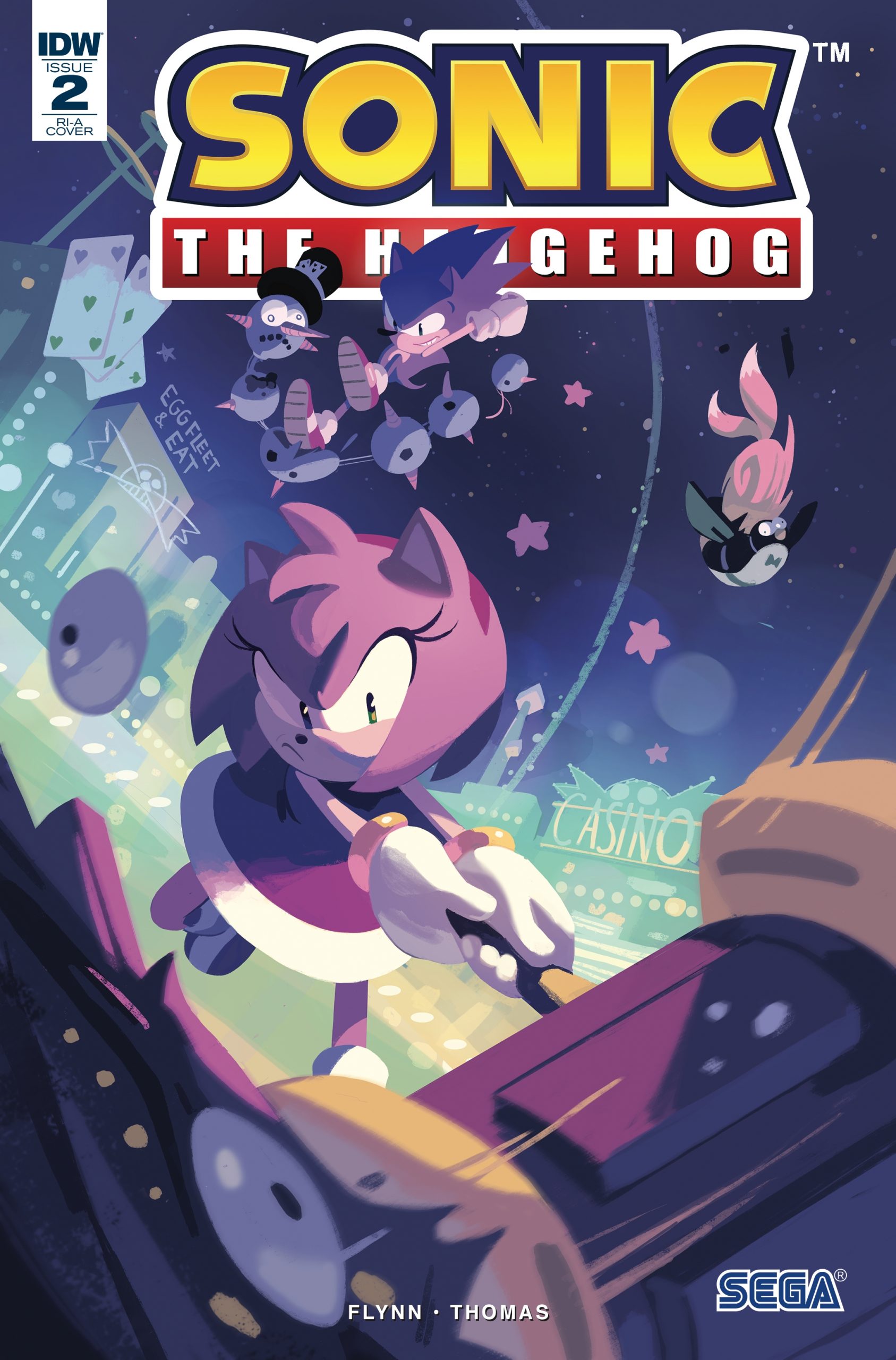 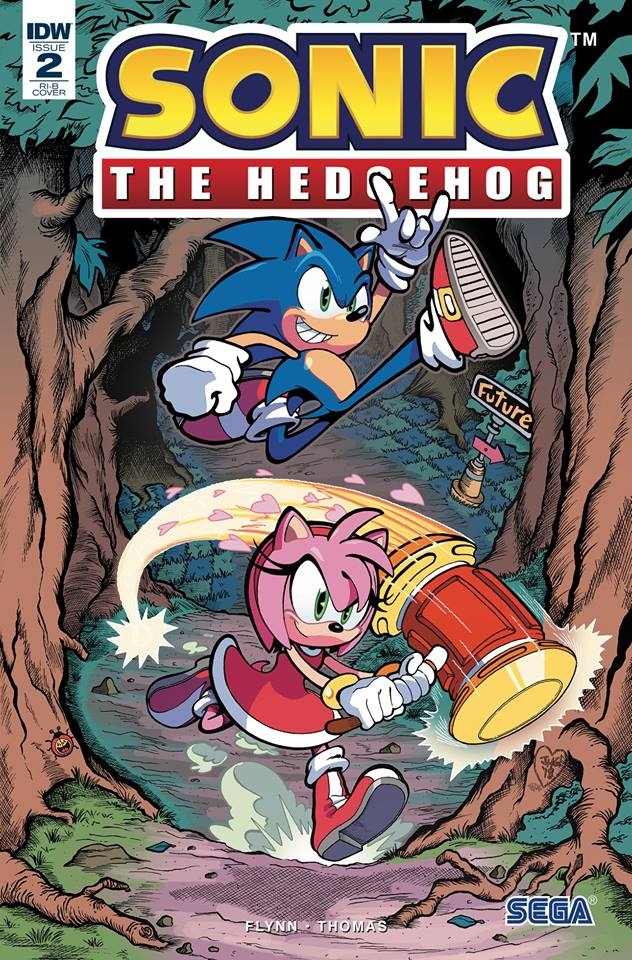 Sonic’s new adventure continues, and when he comes across another town in need of saving, his old pal Amy arrives just in time to join the fight! The banter is fun, and the stakes are high, but things get really serious when Amy presents Sonic with a big request: rejoin the Resistance!

Near another town called Riverside, Sonic the Hedgehog is tangling with the Death Crab Super Badnik, determined to not let it trample the town. Running up the Death Crab, Sonic lands on top of its face and revs up a Spin Dash, before blasting directly through the entire robot. As the Death Crab begins to fall down on the terrified townspeople, Sonic jumps high up into the air after setting off from the Death Crab's leg. He then comes slamming down on the Death Crab's shell, forcing it into the ground.

Landing next to the robot, the confident Sonic is greeted by the townspeople, who begin hailing and praising the blue hedgehog. Suddenly, the townspeople leave the scene in fear. Taking a look around, Sonic notices that the Death Crab is still functioning. However, before Sonic can do anything, Amy appears and gives the Death Crab a good whack with her Piko Piko Hammer. While Amy teases Sonic about his sloppy work, Sonic is just surprised to see Amy, who explains that she, after having heard about how he and Tails saved the neighboring town, came to this town knowing she would find Sonic there. Though intrigued about how fast the news traveled, Sonic dismisses it and prepares to head to the next town now that everything is under control. As he thanks Amy for the save, Amy tells him that she came to Riverside specifically to find him. She asks Sonic to come back to the Resistance, though Sonic wonders why he should since the last time he saw the Resistance they were cleaning up from the Eggman War. Amy explains that the task of cleaning up was bigger than they imagined, as the leftover robots from the Eggman Empire were everywhere and randomly attack anyone they can find. As such, she states that the Resistance is working to finish the fight, by working from a centralized, organized position so they can be more effective.

Much to Amy's frustration, Sonic passes up the offer to rejoin the Resistance. As to why, Sonic explains that, after Tails brought it up, he has noticed that the Badniks they have been facing have been way more organized. What makes this more mysterious is that Dr. Eggman has not showed up to claim responsibility, which is something that does not fit the doctor. Lastly, Sonic notes how coincidental it is for Amy to show up in time to help him stop a Super Badnik, as if someone is playing them. Amy sees the point Sonic is making, but insists that it is another reason for him to join the Resistance. Sonic disagrees, saying it is better for him to hit the road and find out what is going on. Exasperated, Amy notes how much of a waste of time it is, but Sonic thinks it is beneficial to everyone. Suddenly, a villager named Lanolin shows up, saying that they are under attack. Sonic thinks she is referring to the Super Badnik they just took out, but he is wrong: the civilian is referring to a Badnik army invading from the west side of the town. Realizing the Death Crab was a decoy, Sonic and Amy set out to rescue the town before it is overrun. While Sonic runs ahead to thin out the Badniks, Amy, on her request, is taken to the town hall, which had been turned into a bunker during the Eggman War.

Inside the town, Amy rallies Riverside's militia and volunteers and organizes them by getting Wispon-wielding residents into positions on the roofs and instructing the rest on how to get the remaining civilians into the bunker. Meanwhile, Sonic tackles some Egg Walkers head-on, but is forced on the defensive when some Egg Pawns join the fray. Much to Sonic's annoyance, too many Badniks ultimately slip past him. Fortunately, just as the Badniks enter the town square, the residents open fire on them upon Amy's order and manages to take out the first wave of Badniks. Impressed, Sonic jokingly tells Amy that he thought Knuckles was the commander of the Resistance, to which Amy replies that she was the one keeping the Resistance organized while Knuckles commandeered. As Sonic asks what the plan is now, Amy notes that despite the advantages the town has now, there are still too many Badniks. If the villagers are to stand a chance, they have to find out where the Badniks are coming from and thin out their advances. Sonic and Amy thus advance through the invading Badniks to do just that, taking out hordes of Badniks with flashy combination moves. Amidst the fighting, Amy, hoping that Sonic has changed his mind (and that she can spent more time with him), once again invites Sonic to come back to the Resistance. However, Sonic still refuses. Amy argues that he is not even considering it, but Sonic notes that is because he knows what is best for him. Amy subsequently tries convincing Sonic to do it for the Resistance, then her, and then their friends, but Sonic shoots each of her arguments down with counter-arguments.

Just as Sonic teasingly agrees to join the Resistance when Amy bribes him with a chili dog, he takes out more Egg Pawns, only to notice a Blowfish Transporter outside the town with plenty of Egg Pawns onboard. Since they believe they cannot get through the crowd through conventional means, Sonic and Amy decide to do their Croquette Bomber combo, where Amy knocks a Spin Dashing Sonic into the Blowfish Transporter with her hammer. Taking the Blowfish Transporter out in one shot, Amy finds a dazed, but happy Sonic among its remains. Amy then notices that the invasion is over and sadly concludes that Sonic is leaving now. Sonic agrees, explaining that this is his way of life. Getting flustered again, Amy quickly shakes it off and agrees with Sonic, much to Sonic's surprise. Amy then tells him that the way he is is why she loves him and why she does not want to change him. Getting slightly embarrassed, Sonic offers Amy to come along with him as compensation for him refusing to rejoin the Resistance. Amy turns down his offer, insisting that the Resistance needs her to keep everything in order. However, to give Sonic some guidance, she tells him that Knuckles went to investigate a town to the south and since she has not heard from him in a while, he might need help. Accepting the assignment, Sonic heads off, not noticing the Flapper watching him.

Back in the Eggman-themed based, an unseen figure is displeased with his failure to eliminate Sonic. Noting that they had not taken Amy's growth into account, they see that Sonic is now deviating from his projected path, much to their frustration. Meanwhile, Orbot and Cubot enter, with Orbot informing his "boss" that Sonic is heading towards the location of Rough the Skunk and Tumble the Skunk. Pleased with this, the unseen figure thinks that maybe the skunk brothers can finish off Sonic.