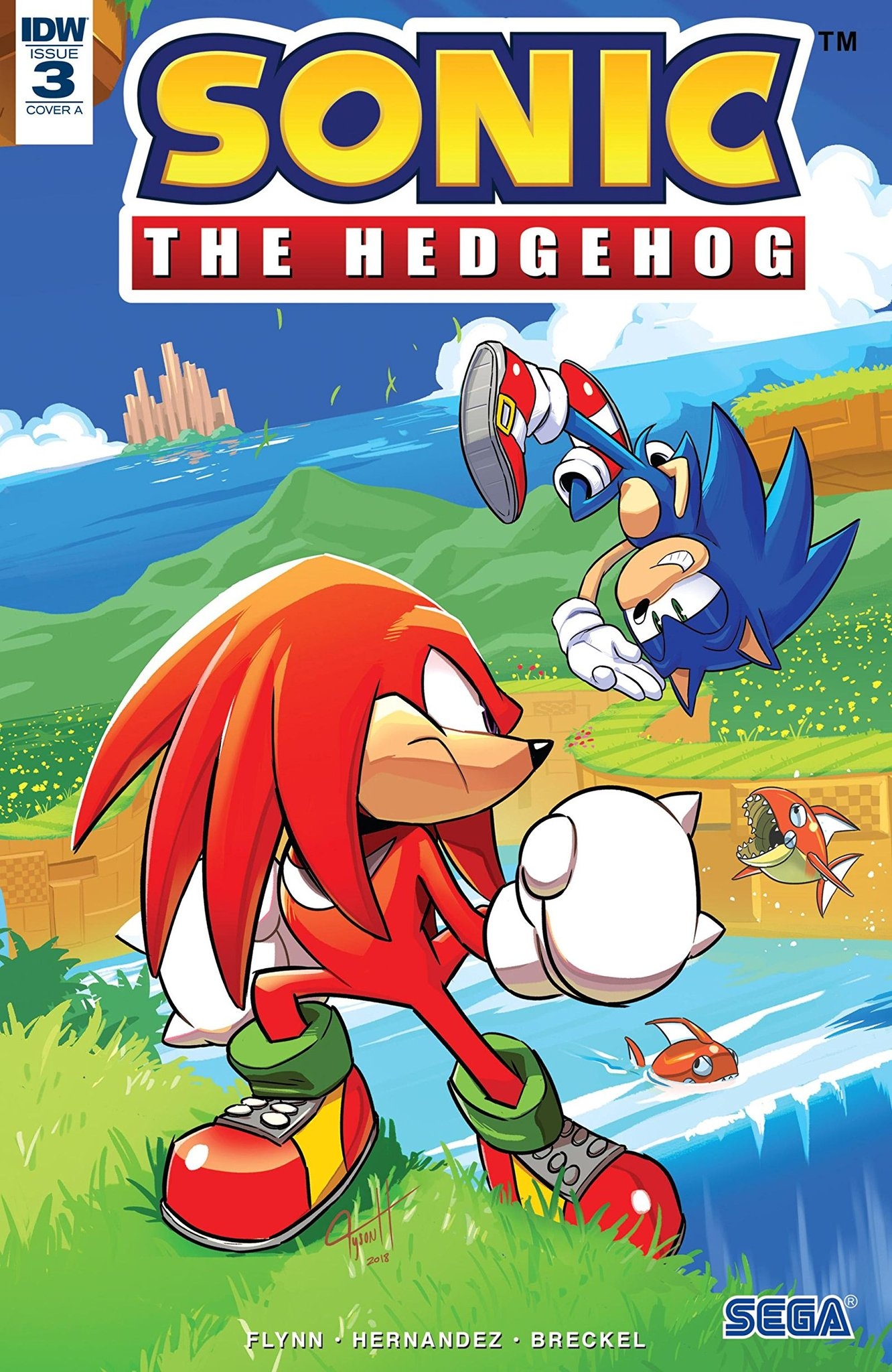 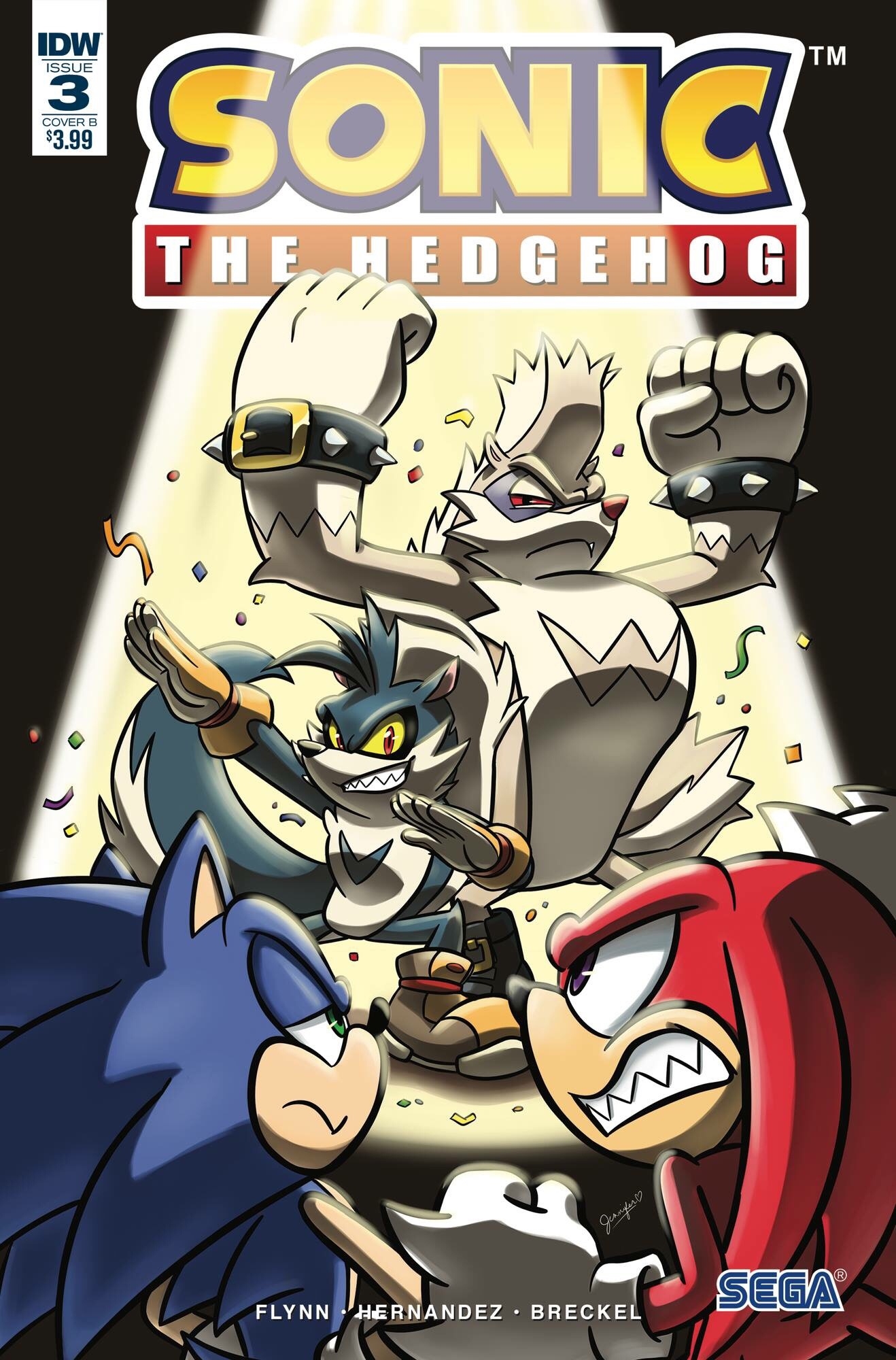 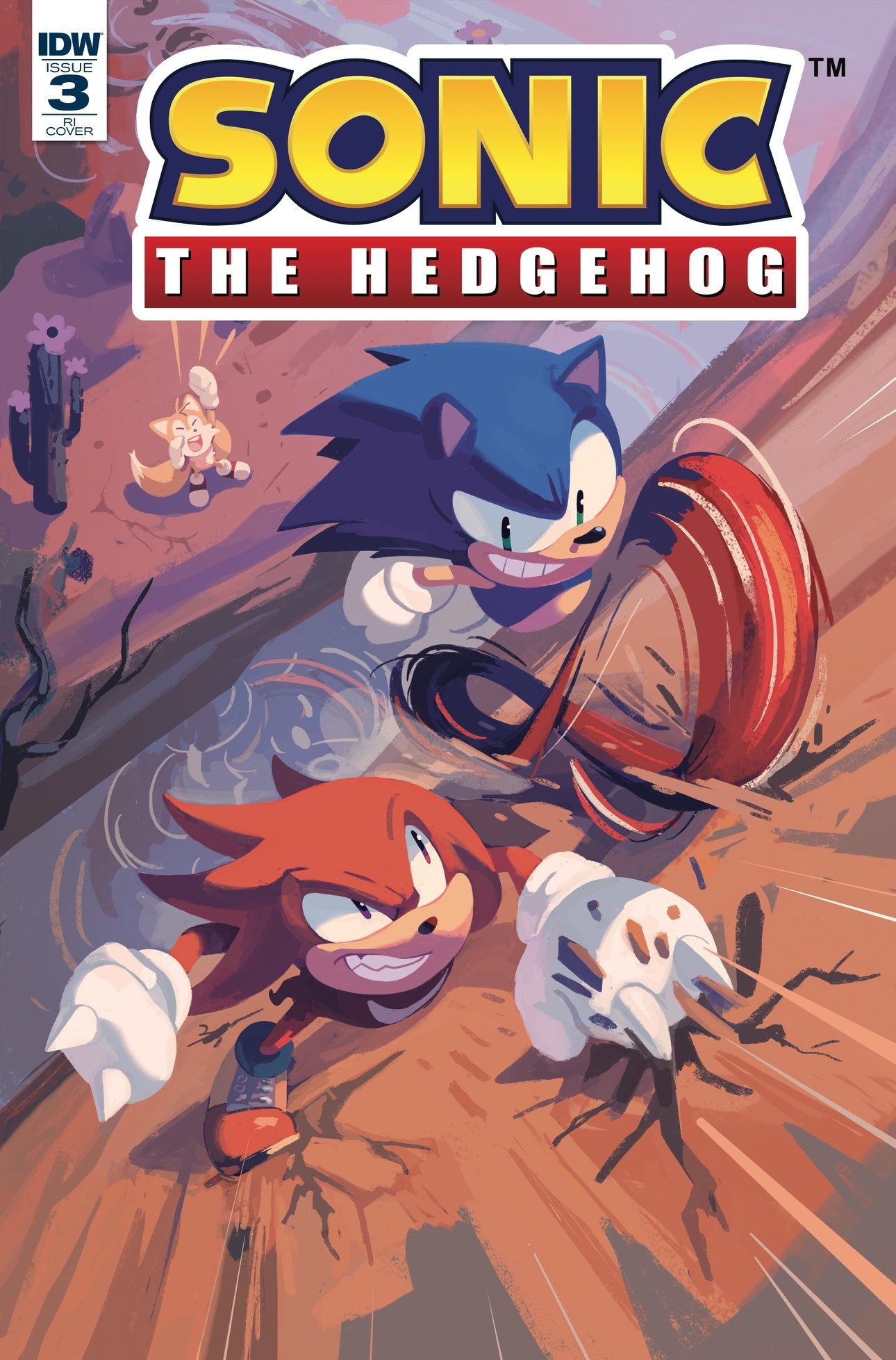 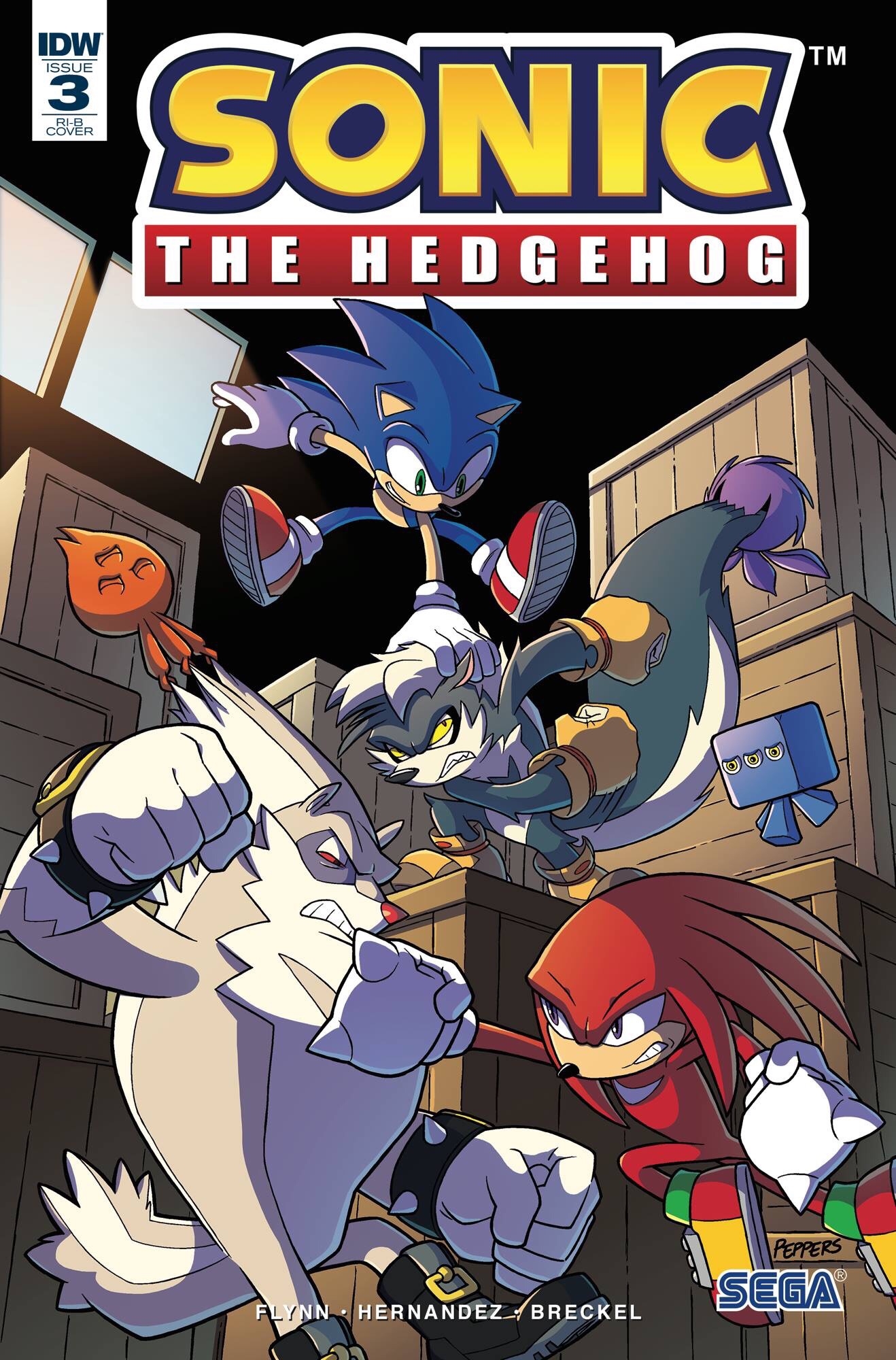 Sonic and Knuckles team up, and it's just like old times-until two new villains show up. With a group of villagers under attack, will even the combined forces of these two heroes be enough to take down Rough and Tumble???

Having arrived at Barricade Town, Sonic watches from a distance as Knuckles takes down a Death Egg Robot, noting humorously that he is too late for the fun. Running up to Knuckles, Sonic is greeted by the red echidna, who asks what brings him here. Sonic promptly explains that he has come to help him after Amy told him what he was up to. Sonic then inquiries Knuckles on why he, as the commander of the Resistance, is away from the HQ. Knuckles explains that while being commander was interesting while they fought to save the world, the position was now all about things like inventory and scheduling now that they are focusing on rebuilding the world, things that Knuckles, who is now feel ready to go back to Angel Island and get on with some treasure hunting, has no patience with. Sonic replies that he can relate, as Amy tried to enlist him for the Resistance full time, something which Knuckles finds ridiculous.

Sonic proceeds to ask what is going on inside the town Knuckles just saved. Knuckles explains it is a hub for distributing Wispons, but because its shipments suddenly stopped, he went to check on it. Knuckles then tells the person in charge of the town's gate to let him inside, explaining who he is and that he has taken care of the Badniks. However, the gatekeeper informs him that he has been ordered to not open the gates to anyone. When the gatekeeper refuses to say who gave him that order however, Sonic and Knuckles decide to climb over the wall, much to the gatekeeper's shock. On the other side of the walls however, the townspeople get spooked upon seeing them. As the townspeople hide in fear, Knuckles wonders if the recent aggressive Badnik attacks is what has the townspeople on edge, but Sonic thinks it is something else. The gatekeeper then arrives and silently tells Sonic and Knuckles that they should not have come, prompting Sonic to reply that they can fix whatever the problem is. The gatekeeper thinks they cannot however, noting that "they" have all the town's Wispons and Wisps. While Knuckles is confused, Sonic remarks that he and Knuckles can handle themselves, before asking for the full story.

Submitting, the gatekeeper explains that just before the Eggman War between the Eggman Empire and the Resistance ended, two ferocious mercenaries showed and saved the town by driving Eggman's forces away. These mercenaries said that they were going to improve the town's defenses, but instead, they took the town's arsenal and kept the residents prisoners within their town. Having nothing to fight back with, and with Badniks stalking outside the town walls, the residents were left with no choice but to follow the mercenaries' orders. With Sonic and Knuckles deciding to pick a fight with the mercenaries, the duo head towards the supply depot-turned-fortress after hearing from the gatekeeper that they can find the mercenaries there.

Arriving in the depot, Sonic and Knuckles locate the Wisps, who have been stacked in their Deployment Pods. Knuckles then recalls how Tails gave the Resistance the ciphers for the Wisps' language before he went solo so the Resistance could ask the Wisp for their help in fighting Dr. Eggman, which they happily volunteered for, even choosing to wait in Deployment Pods for when the Resistance's troops could enter different areas. Seeing the Wisps hoarded like this however, saddens Knuckles. As Sonic then promises to free the Wisps soon, Knuckles hears the mercenaries laugh nearby. Behind the crates, the two heroes see two anthropomorphic skunks who has the villagers serve as their slaves for their entertainment and pleasure. Noticeably ticked off, Knuckles gets ready to fight, but Sonic has them take it slow so the villagers can have a chance to escape the line of fire first. Sonic thus promptly calls out the two skunks and introduces himself and Knuckles to them before giving them a proposal: either they come quietly to face justice for their crimes, or they are "gonna get loud". As the villagers leave the room, the skunks themselves are reasonably angry about Sonic and Knuckles having intruded upon their territory. Seeing how Sonic introduced himself and Knuckles, the skunks return the favor by introducing themselves as Rough the Skunk and Tumble the Skunk in a very flashy manner. While Sonic struggles to keep himself from laughing, Knuckles notice how dangerous the skunks are by their coordination.

The two duos proceed to fight. While Rough and Tumble put up a decent fight (with Tumble using Sonic as a basketball and Rough unleashing his Stink Bomber on Knuckles), they are ultimately outclassed by Sonic and Knuckles. Beaten but not defeated, both skunks decide to then arm themselves with Wispons. Seeing the trouble they are in, Knuckles suggests they grab Wispons as well but Sonic has a better idea. He calls out to all the Wisps that power the Wispons and reminds them all how he helped them save their planet from Dr. Eggman and how they helped him on the Lost Hex and in the Eggman War. Praising the Wisps for their bravery and strength, Sonic tells them that despite their passive ways, they should not let Rough and Tumble boss them around, because they need them. Seeing the truth in Sonic's words, the Wisps in Rough and Tumble's Wispons leave them, rendering their weapons inert. More angry Wisps then appear, with Rough and Tumble trying in vain to get their Wisps back into their Wispons. Adding insult to injury by imitating their introduction from before (which Rough takes very personally), Sonic and Knuckles deliver a knockout blow to the villains.

Outside, Sonic and Knuckles bring the apprehended skunks outside for the cheering villagers to see. As the gatekeeper appears to thank Sonic for all his help, a Yellow Wisp suddenly appears and starts taking gibberish. As the gatekeeper and Sonic wonder about what it says, the Yellow Wisp flies into the gatekeeper's Drill Wispon, making Sonic realize what it said: it and the other Wisps are planning to stick around and help the townspeople defend their home. Getting teary-eyed, the gatekeeper thanks the Wisp. Meanwhile, as Rough and Tumble are being taken away to get locked up, the two skunks arrogantly swear that they will be out soon enough and get their revenge on Sonic and Knuckles. Knuckles, however, gives them a look that scares them straight and the villagers laugh.

Knuckles thanks Sonic for the help and hopes that things will start to settle down. Sonic informs him that while a vacation would be nice, he needs to find out who is now in charge of Eggman's remaining forces. First, however, they feel a party with the Wisps and the villagers is in order. Unbeknownst to everyone however, a Flapper is watching them from afar, with an unseen figure in an Eggman-themed base watching its video feedback. Seeing that Knuckles is away from home, they realize Angel Island and the Master Emerald are unguarded, which they see will speed up their plans considerably...