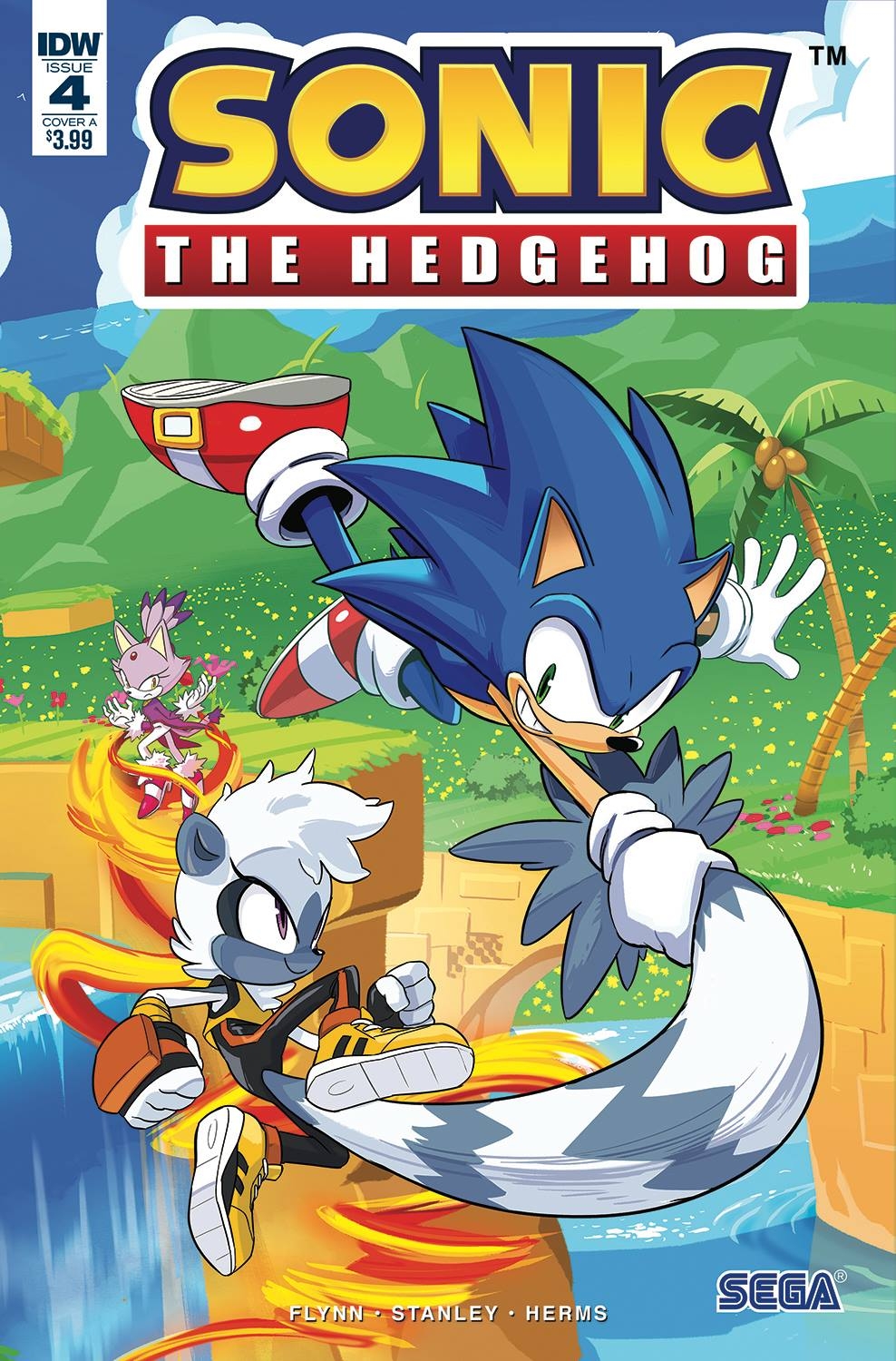 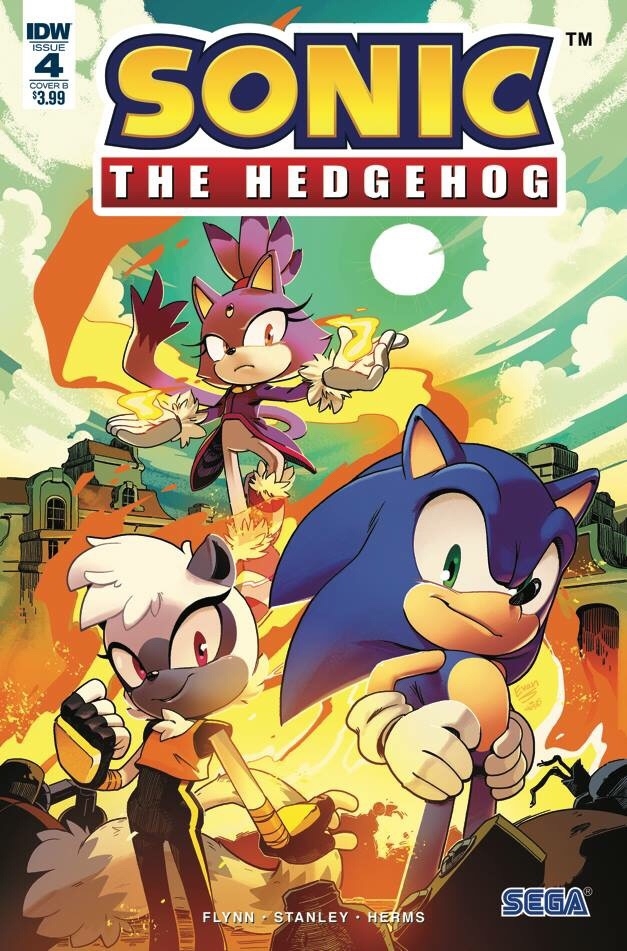 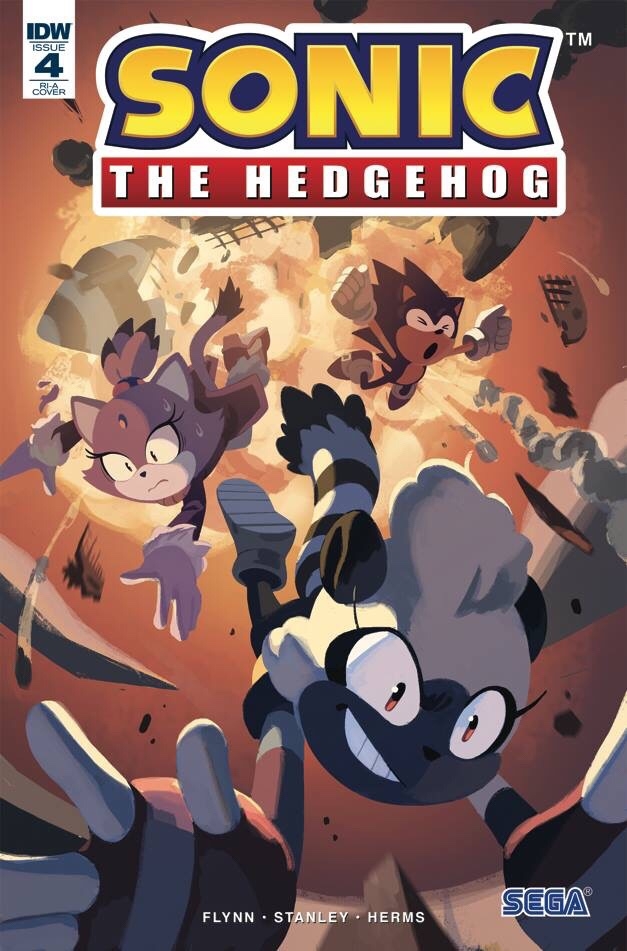 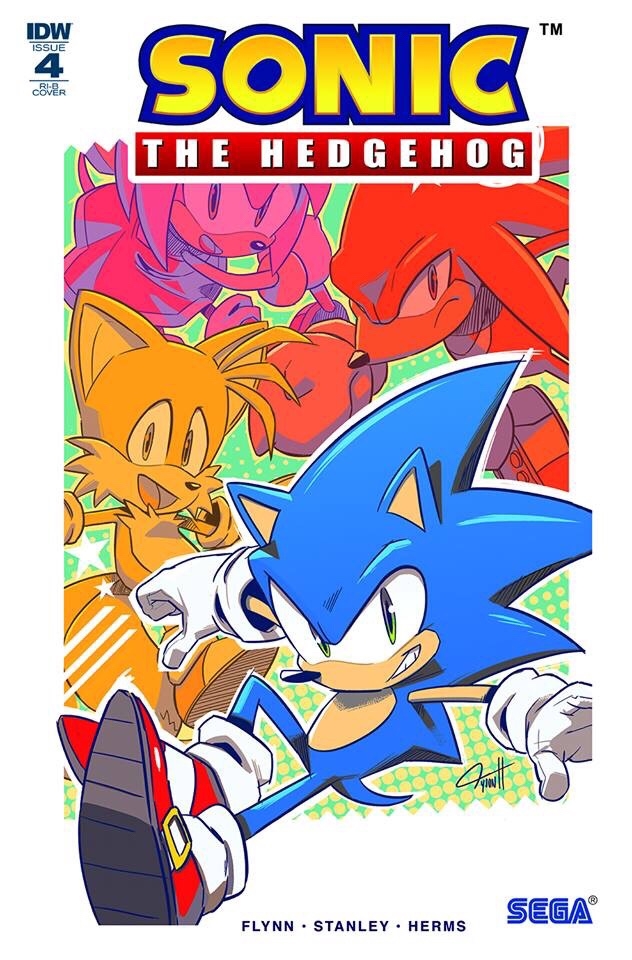 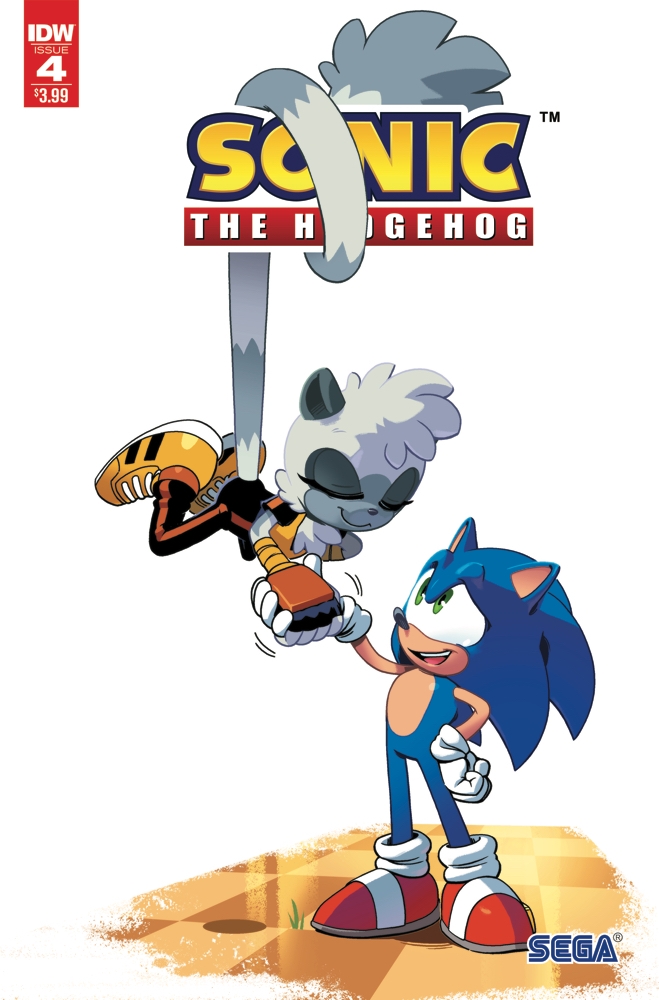 Sonic comes across a town under attack from the biggest Badnik force he’s ever seen. Luckily, help is on the way from his old friend Blaze, as well as a new hero! Get ready for the debut of Tangle!

In the twilight hours, Sonic arrives at Spiral Hill Village which is being besieged by a giant Buzz Bomber dropping a continuous barrage of Badniks upon it. Concerned, Sonic considers that whoever is organizing the Badniks is really stepping up their game, and hopes he is not too late to help.

Assessing the situation, Sonic realizes that it will be difficult for him to fight off such a large organized force on his own, and reconsiders if he should have rejoined the Resistance. As Sonic enters the town, he encounters local militia members fighting holding off the Egg Pawns. He reasons that if the Resistance is not already there and he was with the Resistance, no one would have ever known about the attack. He dismisses the thought, recognizing that he does not have time to second guess his actions before noticing that another combatant is already on the scene.

A young female lemur is fighting a squad of Egg Pawns using her long prehensile tail. She entwines several in its grasp then tugs it to smash the Badniks together causing them to explode. Her tail singed, she alternates between pain and triumph. Smashed but still functional, an Egg Pawn attempts to shoot the lemur from behind, but Sonic smashes it, warning her to watch her back. The lemur turns around in surprise, thanking Sonic.

The lemur welcomes Sonic to her hometown, asking forgiveness for the current robot problem like a polite hostess. Sonic slyly asks, "What robot problem?" as the pair casually fight off the Egg Pawns. The lemur tells Sonic that he is sweet not to notice, and comments on how he seems to be a natural at this. Sonic agrees, and the pair shake hands (hand and prehensile tail more specifically), introducing themselves to one another. Introducing himself as Sonic the Hedgehog, the lemur introduces herself as Tangle, and states coolly that she always wanted to meet him. Sonic is charmed to meet her, and Tangle responds likewise.

Tangle relays to Sonic that she has been repelling the odd raids for a while now, but nothing like this. She wraps up a few Badniks in her tail and shouts "Pull!" hurling them in the air like clay pigeons for Sonic to smash. Sonic confirms that the gangs of Badniks are becoming more organized and that he is currently looking into it. The pair stop in their tracks as they spot a new wave of Badniks approaches, including a huge, heavily armed Moto Bug.

An Egg Pawn atop the tank opens fire with a turret mowing down several of its allies in attempts to fell the heroes who manage to safely vault out of the line of fire. A second giant Moto Bug busts in through a wall behind them, as Badniks surround them on all sides. Somewhat tense and nervous, Tangle asks Sonic if he is merely the Resistance's advance guard. Sonic replies that they are likely tied up somewhere else with a similar situation and are likely not coming to help. She resolves to split them 50/50, not willing to go down without a fight. Sonic agrees to the plan, teasingly adding the condition of her being able to keep up with him.

Suddenly, a cyclone of fire erupts, incinerating several Egg Pawns. As it dissipates, the form of Blaze the Cat is revealed as she turns to face Sonic and Tangle. Sonic is overjoyed to see her, and Tangle is lost in amazement. Sonic enthusiastically greets Blaze, waving vigorously to her. Tangle remains agape as Sonic runs over to greet Blaze who assumes that she just torched Dr. Eggman's robots. Sonic confirms her assumption and asks her to help the town which is currently in peril, if she did not mind. She agrees, stating that it would be her pleasure to lend her assistance. Sonic gives an approving thumbs up as Tangle continues to look on in confusion.

Blaze takes off smashing and burning numerous Egg Pawns. Sonic runs off in the opposite direction to handle the other Moto Bug, while Tangle remains frozen in shock. However, seeing Blaze's actions, she shakes it off and takes the Egg Pawn manning the tank turret out. She then redirects the turret to shoot the Moto Bug in its own head, disabling it. She then uses her tail to snap off one of its claws and fling it into the other, destroying it. Sonic slides away, managing to avoid the Moto Bug's final attack, as the three coordinate to wipe out the remaining Egg Pawns.

Blaze feels that the three of them are not enough to win the day, even with the town's militia assisting them. The Badniks are replenishing their ranks too quickly to overcome. Tangle points out that they are coming from the battleship looming overhead, and Sonic adds that it is a lot beefier than the Blowfish Transporter, he and Amy took out previously. Sonic asks if Blaze can take it out, but it is out of her range. Having just met, Tangle bashfully offers to use her tail to fling them up to it. Using her tail like a giant sling shot, Tangle launches Sonic and Blaze high into the air. Sonic spins and Blaze throws him with fiery force into the open launch bay of the ship. Sonic lands within the ship with a mischievous grin and commences to wreck it. As the giant Buzz Bomber falls in direction of the town, Blaze blasts the ship with a powerful fire attack, finishing it off.

As she uses her abilities to safely float back to the ground, Blaze is greeted by Tangle praising her amazing powers. Tangle then shows concern for Sonic's well being. Blaze seems unconcerned stating that he will be fine just before Sonic comes bouncing down and lands dizzy and stunned and shakily expresses how much fun that was. Tangle helps Sonic to his feet asking if his life is always so exciting. Sonic assures her that it is as long as he can help it.

Sonic introduces Tangle and Blaze to one another, Tangle as a local and Blaze as a princess from another dimension and guardian of the Sol Emeralds. Once again taken back by this revelation, Tangle happily thanks her highness for helping to save her home. Blaze tells Tangle that she is welcome and to just refer to her as Blaze without the formalities. Sonic asks Blaze what brings her to his world, and Blaze reveals that the Sol Emeralds spoke of a terrible event about to transpire in his world. Sonic jokes that she is about seven months too late and described how he was captured by Dr. Eggman, who then conquered the world, but eventually escaped and defeated him.

Tangle interjects that if the Badniks are becoming more organized that perhaps something even worse is on its way and that is why the Sol Emeralds warned Blaze. Blaze agrees that the Sol Emeralds would not have done so without good reason. Blaze resolves to stay in Sonic's world until that reason becomes clear and Sonic applauds Blaze, knowing he can always count on her. Blaze offers to use her powers to help quell the fires around the town, and Tangle excitedly offers to lead her the about the town. Blaze leaves Sonic to find the ringleader behind everything and Tangle thanks him for his help. Sonic needs a breather and rests for a brief moment before heading off to find more clues.

Elsewhere a mother is shown in the streets telling her young son that it is getting late and that it is time to come inside. Crying, the boy protests that his wagon is broken and that he cannot carry it inside. Peaking through the blinds from a nearby building, a somewhat disheveled Dr. Eggman looks on. He promises that very soon not only will he fix his little red wagon, but he will fix everything.