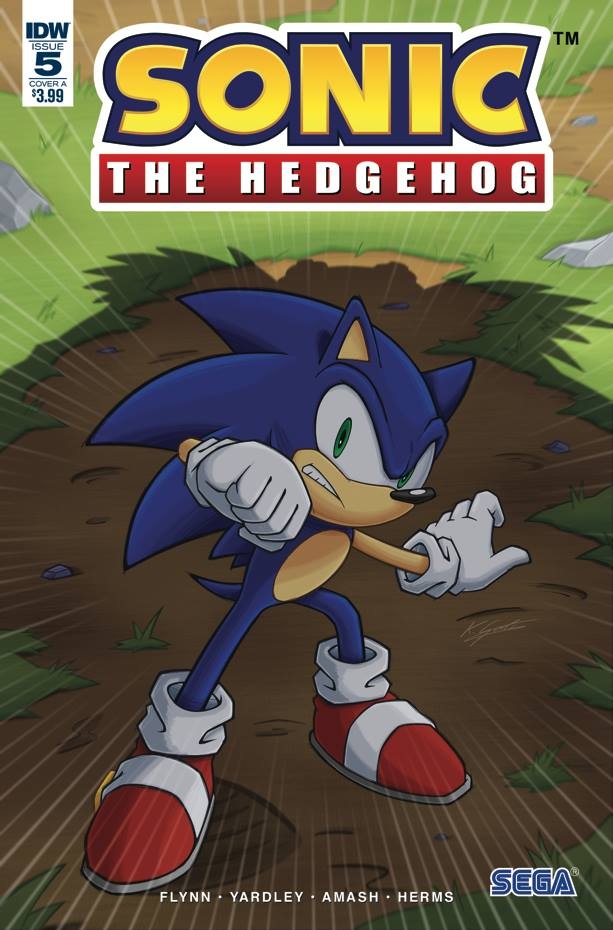 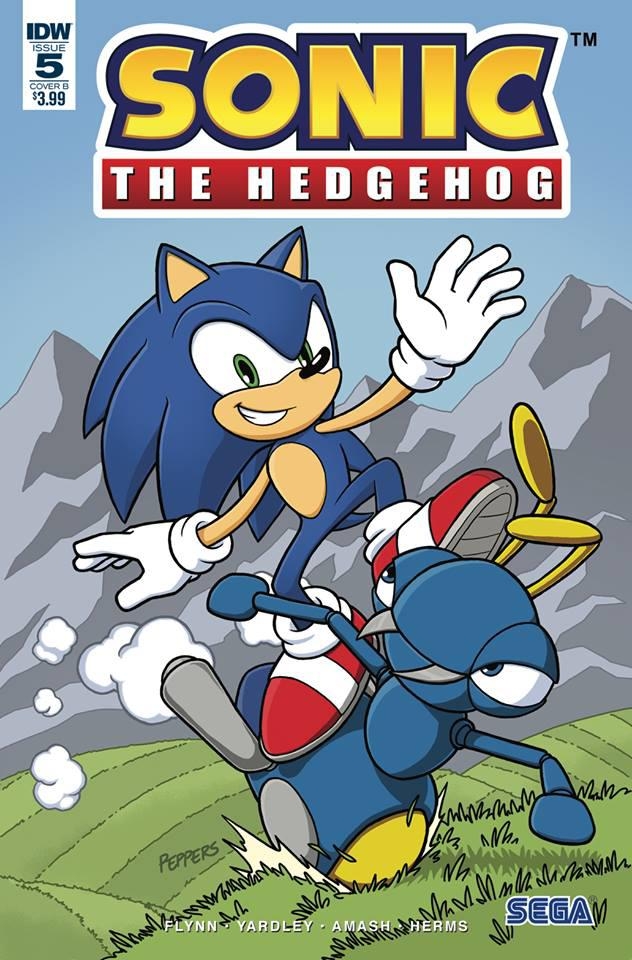 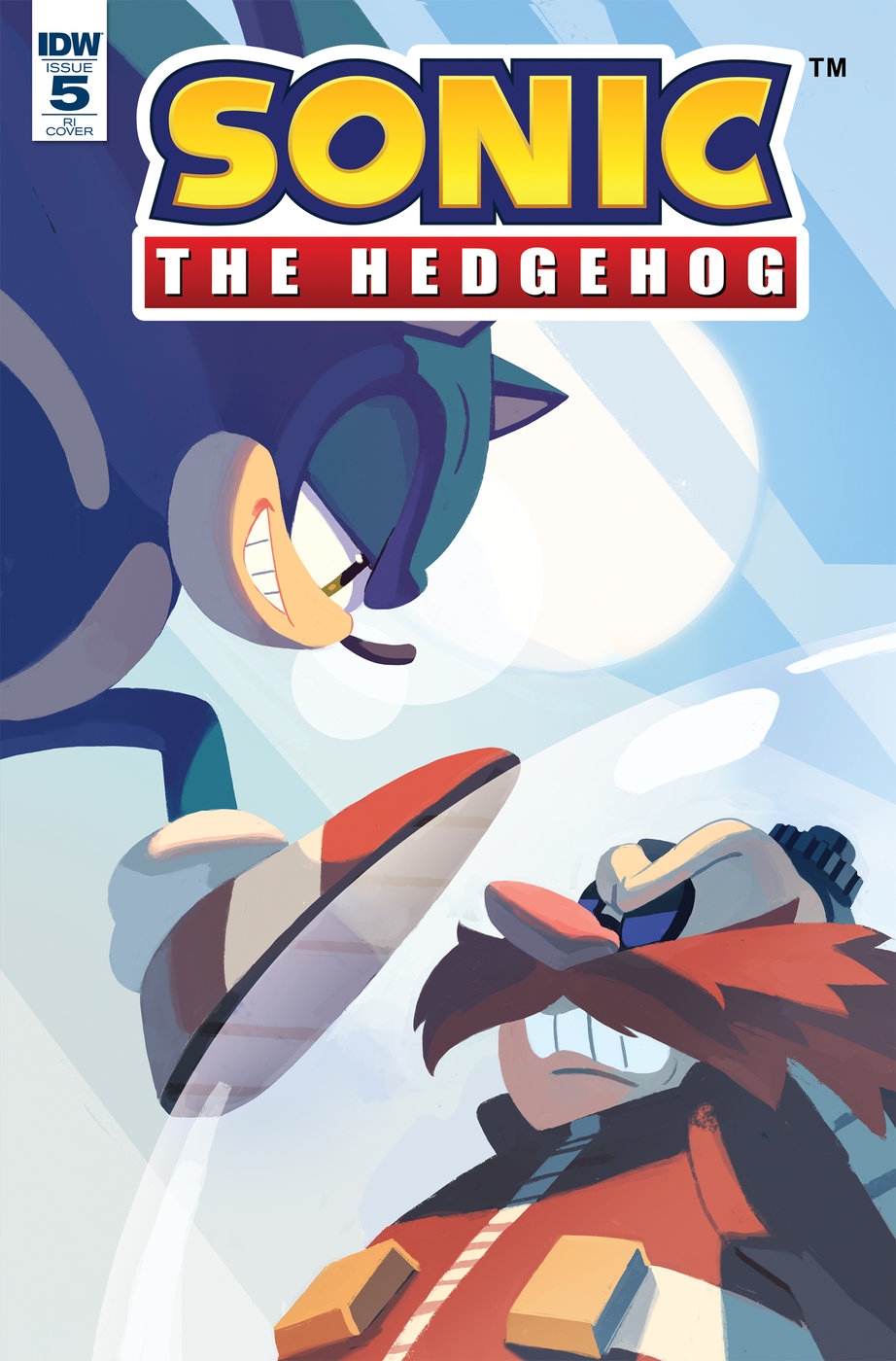 “The Fate of Dr. Eggman,” Part 1. After his last battle with Sonic, Dr. Eggman’s gone quiet. His Badnik forces are still causing trouble, but without the bad doctor’s usual fanfare. What’s Eggman been doing all this time? And what will happen to Sonic when he finds out?

In an mountainous area with evergreens and intertwined corkscrew loops made of stone, Sonic and Espio the Chameleon are busy fighting a swarm of Badniks consisting of Antons and Hoverbys that are approaching from multiple directions. The duo soon find themselves surrounded, but Sonic casually states that he has handled worse, and that they just "gotta get into the swing of things". Catching Sonic's drift, Espio throws a kunai with a rope tied to it into the corkscrew road and grabs Sonic's hand, causing them to swing around the corkscrew road at high speed and take out the Badniks that have them surrounded. Finishing the manuever, Sonic asks Espio if the Chaotix have tracked down Dr. Eggman yet. Before Espio can answer however, more Antons approach them. The two heroes quickly destroy the Badniks and watch happily as the Flickies that were trapped inside the Badniks fly away.

Sonic thanks Espio and notes that since the rogue Badniks are getting more organized, Eggman must be gearing up for something big. Espio, however, does not believe that Eggman is behind the Badnik attacks. Curious, Sonic asks Espio if they have found a lead, and Espio answers that they have found something better. He explains that after the Chaotix went to Imperial City, only to find nothing but wreckage, they went to Eggman's last known lab. There, they found Orbot and Cubot, who, despite being cooperative, knew nothing about Eggman's whereabouts. Furthermore, Eggman's computer in the lab showed no escape plans or personal traffic, likely because Eggman thought he had won in their last encounter. Espio then explains that he and the Chaotix tried checking out Eggman's other bases, only to encounter trouble at every turn, like giant snakes in Mystic Jungle, E-106 Eta, and occasional Badniks. With Espio finishing his story while he and Sonic are riding a gondola, Sonic begins to wonder why Espio called on him if they did not find Eggman. Clearing his throat, Espio tells Sonic that they did, in a way, and explains to a surprised Sonic that they received an anonymous tip that led them to a village which Espio was currently leading Sonic to. With this, Sonic heads towards the village with Espio.

Sonic soon finds himself in an idyllic village, much to his own surprise. There, he meets Charmy Bee, who introduces him to the children of the village. The young detective realizes Sonic has not met "the big guy" yet and flies off to get him. What Charmy brings back however, while Vector the Crocodile skeptically looks on, is a merry Eggman dressed in casual work clothes. Upon meeting Sonic, Eggman introduces himself as "Mr. Tinker" (as he has been called). Sonic, however, scoffs Eggman's attempt to shake his hand, not buying what he believes to be an act on the doctor's part. Eggman, on the other hand, does not know why he refers to him as a doctor, though he admits he does not remember much of anything (except for how to fix and build stuff, as put by Charmy). Sonic proceeds to ask Eggman about what he knows about the Chaos Emeralds, the Lost Hex, the ARK, and the Death Egg, but none of these seem familiar to Eggman. Vector then tells "Mr. Tinker" that this is just a case of mistaken identity and tells him to go back to his work. Although Eggman wants to help, he understands and takes his leave with the children.

Talking in private with the Chaotix, Espio points out that this is what he meant when he said that they had "sort of" found Eggman. Sonic is still not convinced however, since Eggman has pulled similar stunts before. Vector notes that they have been investigating and observing Eggman thoroughly for the last couple of days and can confirm that Eggman's amnesia is legitimate. Even with Eggman having lost his memories though, Sonic somberly recalls how dangerous Eggman can be, both to him and entire planets, as he recalls several incidents with the doctor. With Eggman as he is now, Vector is not sure what to do, questioning whether or not it would be ethical to punish someone for something they do not remember. While Eggman works on repairing the children's toys, Espio believes that Eggman must be brought to justice regardless for the crimes he has committed, but Sonic reminds him that they cannot really call the new Eggman the same person they once knew.

Elder Scruffy then shows up, and says that he wants Sonic, as the famous hero, to be the judge of Eggman, although not without hearing what he has to say. Elder Scruffy explains that Eggman appeared in his village one day without warning. While unsure of how Eggman had survived, the villagers had him locked up immediately. The next day, however, they discovered that he had broken out of his cell, only to reinforce it. The villagers thus spent the next days questioning and testing Eggman, only for him to not show any trace of his villainous ways. Eventually, the village accepted the new helpful Eggman, taking him in and nursing his wounds. Elder Scruffy then tells of how Eggman repaid their kindness by repairing anything they brought him, both big and small. Elder Scruffy then finishes his tale with an appeal to Sonic: though Eggman has done many terrible things that cannot be undone, Mr. Tinker has proven to be a blessing to the village. As such, Elder Scruffy wants Eggman to be free so he can do some good instead of rotting in a cell and doing nothing.

Feeling conflicted after hearing Elder Scruffy's story, Sonic is unsure about what to do. Vector remarks that they could stick around and keep an eye on Eggman, but Sonic tells him that this will just delay things. Before Sonic can figure this out, however, a terrified villager comes running, screaming that Badniks are coming in from the south. Shooting Elder Scruffy an annoyed look, Sonic has the Chaotix handle the Badniks while he confronts Eggman. When Sonic gets to the house that Eggman is in, however, he finds a scared Eggman trying to build a barricade for the village's children, whom he gently tries to keep calm and assured. He then begs Sonic (whose name he has not heard yet) to help defend the village, admitting in a ashamed manner that he is too afraid to fight himself. Upon seeing this, Sonic tells "Mr. Tinker" that he just has to worry about keeping the children safe while he helps the Chaotix smash the Badniks. Sonic thus hurries outside of town and joins the Chaotix's fight against Hoverbys and Antons. During the fight, Charmy sees a Flapper in their midst and takes it out. Back in the Eggman Empire-themed base, the unknown figure controlling the Badniks gets angry with this development, questioning why Sonic and the Chaotix were there. The figure also wonders if their forces have stumbled upon a settlement and if Sonic and his allies have figured him out.

Back at the battlefield, Sonic and the Chaotix clear up the remaining Badniks. Vector notes that it was a pretty puny rescue force, only for Sonic to correct him, stating that Eggman was terrified of his own robots. Charmy then begins teasing Vector about how he told him that Eggman was a good guy now, prompting a fight between the two. Espio subsequently asks Sonic of what he intends to do now that Eggman is a new man. Sonic grins, knowing exactly what to do.

Back in the village, Sonic shakes Mr. Tinker's hand and apologizes for mistaking him for someone else. Wanting to make a fresh start as well, Sonic introduces himself to Mr. Tinker, who humbly accepts it. Mr. Tinker also hopes that Sonic finds the one he is looking for as he seems worrisome, but Sonic tells him not to worry about it, as he thinks he is gone for good. Vector then tells Eggman that, as the Chaotix Detective Agency, they will not leave a job half done, so they will keep an eye out for the doctor. However, Vector also tells Mr. Tinker that he can stay in the village, and thanks him for helping with their investigation. Finishing off with a well-received joke, Mr. Tinker thanks Sonic for helping the village. Just as Sonic prepares to leave however, Mr. Tinker tells him that he hopes he will come back to visit, as he would love to show him Eggman Land once it is complete. This mention of Eggman's personal theme park catches the interest of Sonic, who begins questioning whether or not Eggman's amnesia is genuine. Before anyone else can do anything however, Sonic, Mr. Tinker, and the Chaotix notice Shadow the Hedgehog and Rouge the Bat standing on the rooftops, with the former stating that he will destroy Eggman to ensure he will never menace the world with Eggman Land again.