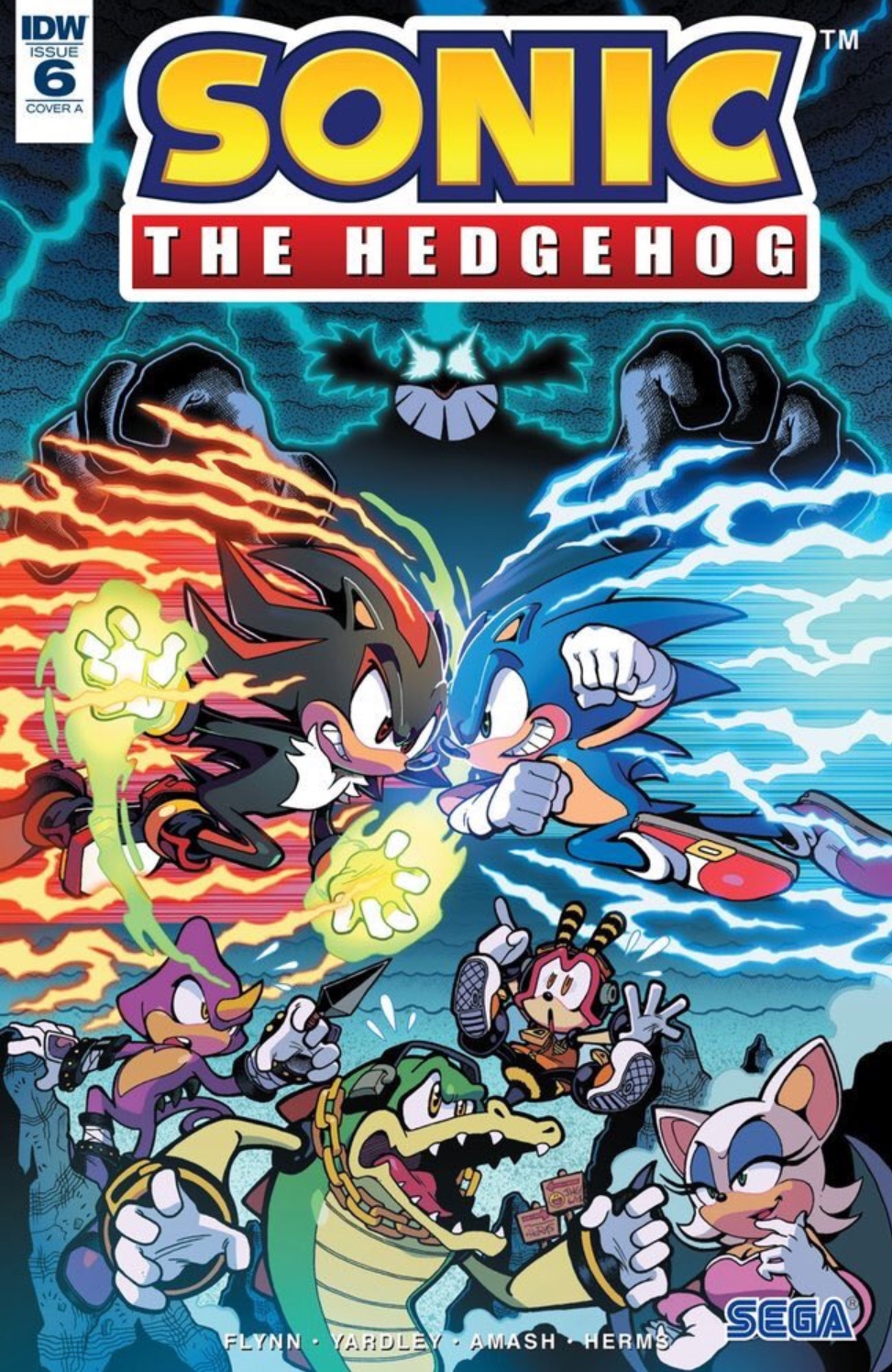 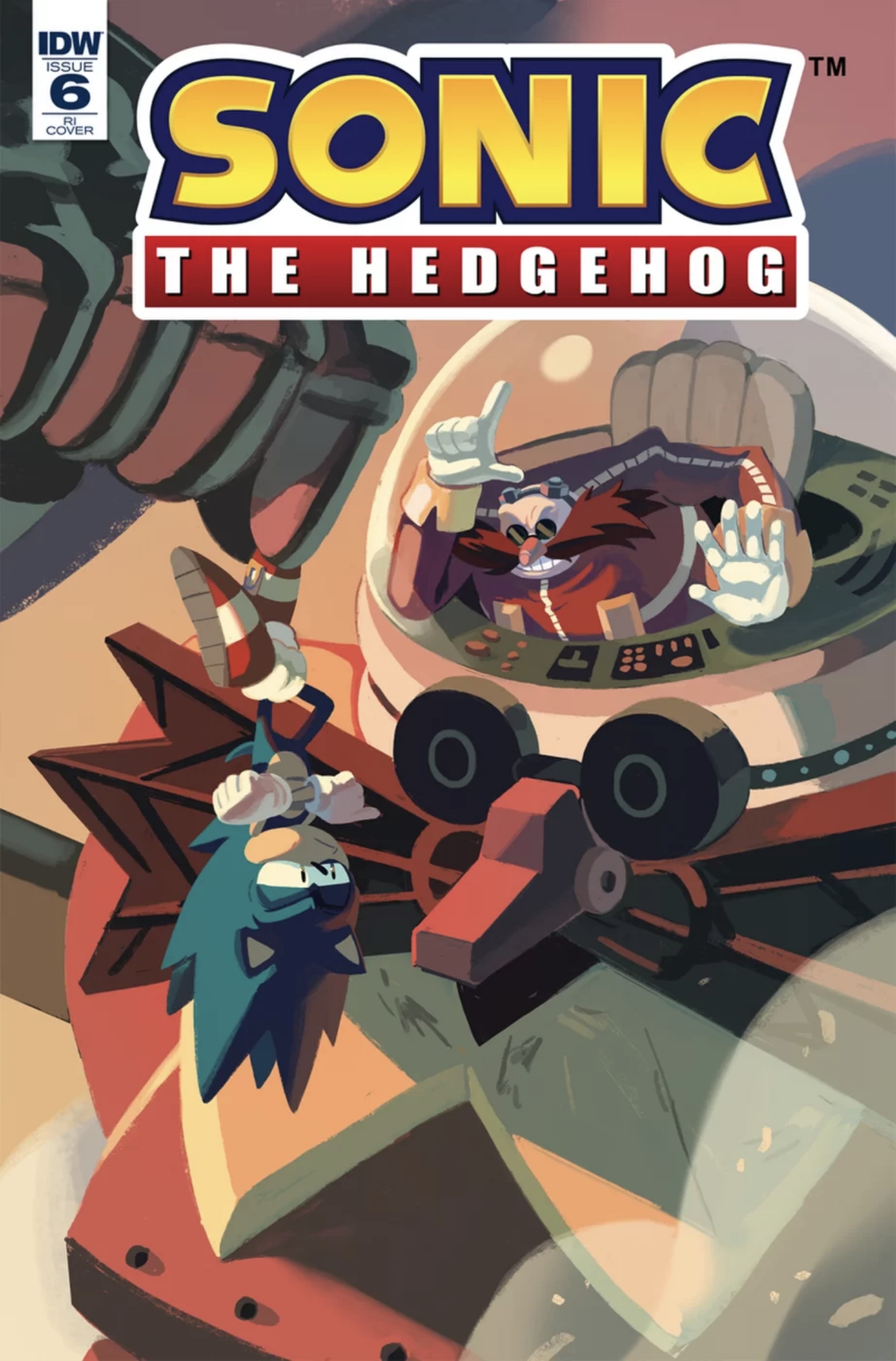 Dr. Eggman has been located, but Sonic’s not the only one to find him! When Shadow comes, whose side will Sonic be on?!?

Guest starring: Shadow the Hedgehog, Rouge the Bat, and the Chaotix Detective Agency! The second part of the gripping story, setting up the series through 2019!

Shadow the Hedgehog and Rouge the Bat have arrived to eliminate the seemingly reformed, amnesiac Dr. Eggman (now going by the name "Mr. Tinker"). Standing around the nervous Mr. Tinker, however, are the Chaotix and Sonic. Sonic drastically attempts to stop Shadow and Rouge from advancing by trying to explain the situation. He tells the duo that though Mr. Tinker mentioned Eggman Land, he has completely lost his memory and cannot engage in his heinous acts any longer. Shadow disregards this, believing that amnesia does not make one any less dangerous. Sonic tries to convince Shadow further but Shadow angrily shoves him aside. Sonic points out that he was not listening and continues to prevent Shadow from reaching Eggman. Eventually, though, Shadow has enough and tries pushing Sonic away, but Sonic grabs his arm and throws him against a wall. The two begin dashing around the town, engaged in combat with one another, much to Mr. Tinker's fright. Vector orders the Chaotix to help Sonic, but the battle proves to be far too fast for them to keep up with, so he turns his attention to Rouge, blaming Shadow's arrival on her. However, Rouge begins explaining that Shadow was already looking for Eggman to exterminate him, and would have inflicted harm on anyone who got in his way, including the Chaotix. She then reveals that she was behind the anonymous tip the Chaotix received on Dr. Eggman's whereabouts, her plan being to let the Chaotix conduct a thorough investigation of Eggman and bring in Sonic, who would serve as a countermeasure to Shadow, before she "helped" Shadow find Eggman. After processing this, the Chaotix (except Charmy) realize she has been helping them all along.

Outside of town, Sonic continues his battle with Shadow while teasing the brooding hedgehog. Eventually though, Sonic tries to convince Shadow that for all the evil Eggman has committed, he has also done some good too. Sonic tries bringing up how Eggman helped saved the world during the Space Colony ARK incident, but a glare from Shadow reminds him that Eggman was the one who started the incident. As Shadow takes off again, Sonic tries reminding Shadow of how Eggman helped everyone fight the Black Arms when they invaded. This makes Shadow briefly reconsider, but he quickly pushes it aside. Sonic soon after trips on a tree root and stumbles into a tree, and Shadow uses the opportunity to pin his rival down. Shadow then begins questioning Sonic about how he can even suggest leniency after everything the doctor has done to him. Sonic, however, brings up that Shadow has tried to destroy him in the past, too, as well as try to obliterate the entire planet. By Shadow's logic, this would mean that Shadow wants Sonic to take out both him and Eggman, since neither of them should be forgiven for their crimes.

As Shadow recalls that he himself has been forgiven for his crimes, he lets Sonic go. He then asks Sonic what his plan with Eggman is, and Sonic expresses his desire to let the doctor stay in the village and let him continue doing good for the residents, although he does want to investigate what prompted Eggman to mention "Eggman Land" in the first place. Realizing in that moment that Sonic had been distracting him all the time, Shadow teleports away and towards the village. His ruse discovered, Sonic hurries towards the village.

Back in the village, the Chaotix see Shadow coming and are ready to stop the black hedgehog in his tracks. Shadow, however, simply teleports past them, into the house. Inside the house, Shadow finds Rouge and Mr. Tinker, the latter of whom is hiding from the black hedgehog behind some furniture. Upon explaining to Rouge that he has discussed matters with Sonic, Rouge allows Shadow to talk to Eggman, and Shadow demands that he show him "Eggman Land". As the pair walks out of the house and past the Chaotix, who are confused, a nervous Mr. Tinker states that he will show it to Shadow, despite it not being finished yet. Mr. Tinker takes Shadow to a barn and shows him that inside it is an indoor amusement park named "Eggman Land" with Badnik-themed rides and figurines. As Rouge, Sonic, and the Chaotix gather outside the barn to see Eggman Land, Mr. Tinker explains that he made it for the village children, in a nice place outside of the elements. Mr. Tinker then asks if he is in trouble, but Sonic assures him that he is in the clear as Shadow departs. Rouge then takes her leave as well by saying goodbye to Sonic and the Chaotix, the latter of whom she assures that Eggman's discovery will be counted as their gig, meaning they get to keep the finder's fee, for which Vector is thankful.

Sonic discusses the name "Eggman Land" with Mr. Tinker, which the latter explains just came to him and thought it sounded like a fitting name for a children's amusement park. Although this makes Sonic wonder if it is a sign that his memories are coming back, Sonic nevertheless promises a hopeful Eggman that he will stopping by from time to time.

Elsewhere, in an Eggman Empire-themed base, Orbot and Cubot are attending to their boss. With Orbot reporting that the flotillas are heading into position, their boss announces that it is time for them to join the Egg Fleet and move on with their master plan. As the figure stands up from his chair, however, they are seemingly revealed to be Dr. Eggman.