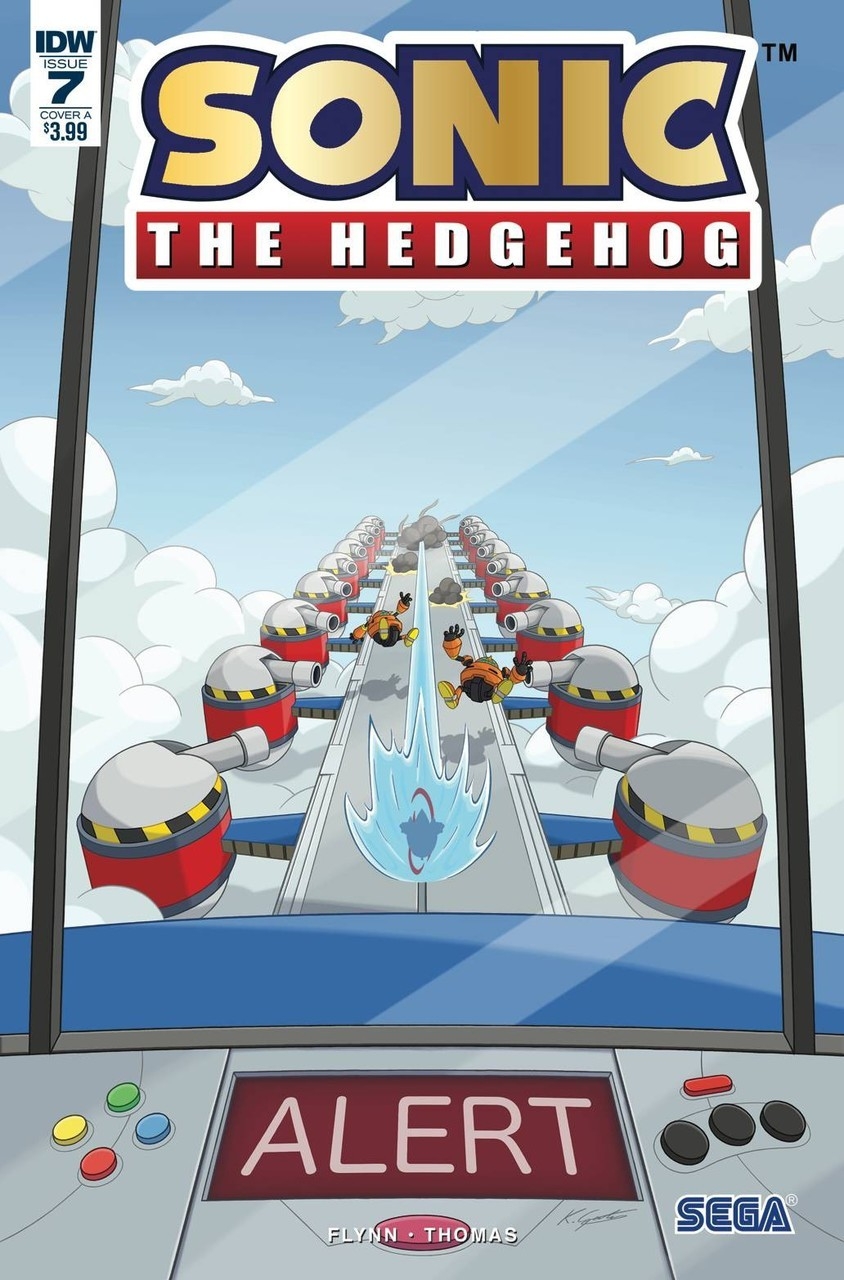 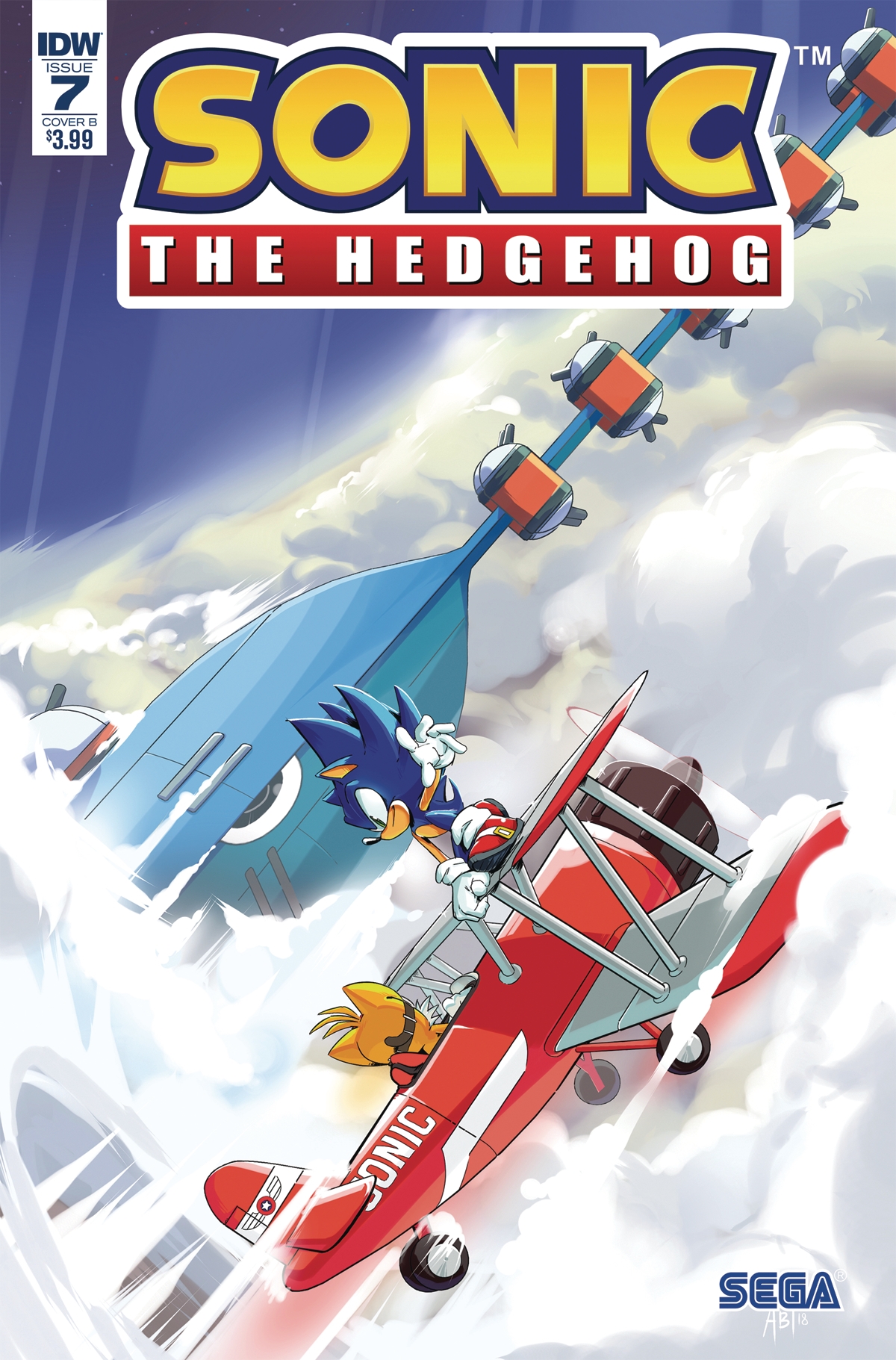 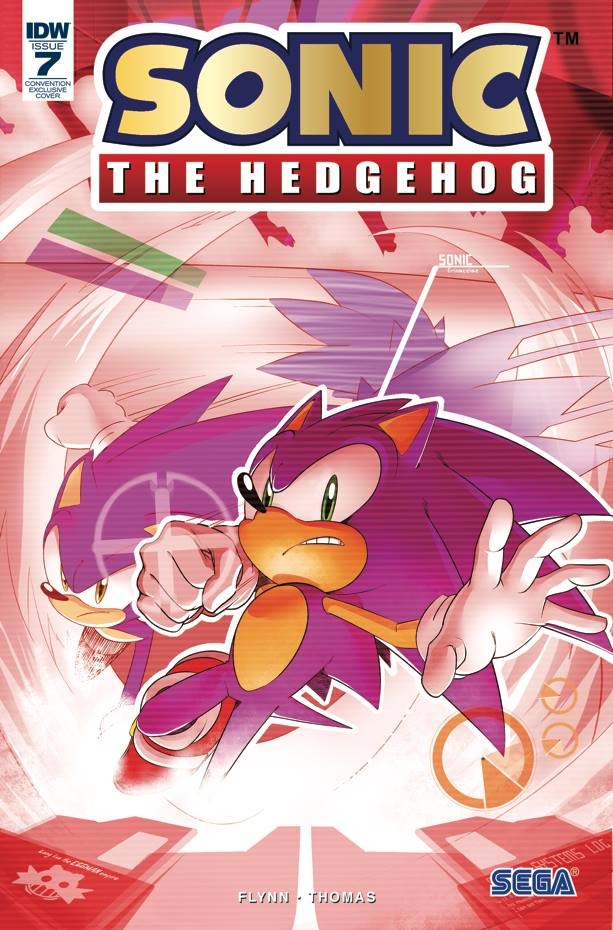 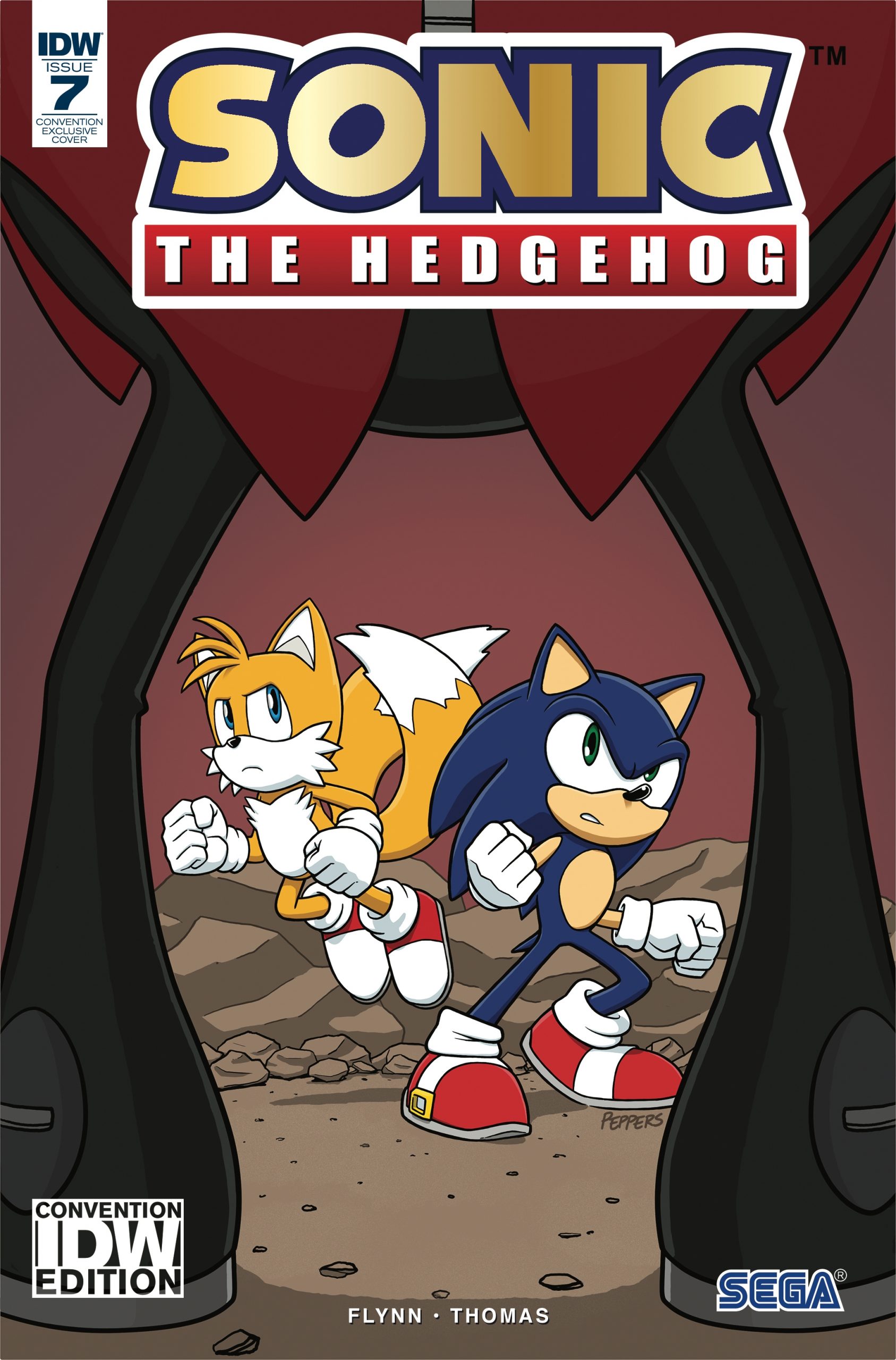 Secrets revealed! After the dramatic events of the last two issues and the secret of Dr. Eggman, Sonic races off to shut down the organized Badniks at the source. Unfortunately, there's more at play than Sonic has realized, and more powerful players…

One of the first major villains of the new series revealed!

A special foil cover to celebrate entering the second half of Sonic's first year at IDW!

In the middle of the sky, Sonic and Tails are flying in the Tornado when they notice one of the Egg Fleet's battleships as it breaches the cloud cover. Sonic asks why the ship did not show up on the radar. Tails has no explanation but adds that if the Egg Fleet is still performing maneuvers, then they must be getting their orders from somewhere, which means this is their chance to get some answers. Tails thus gives Sonic his Miles Electric and tells him to find a computer onboard the battleship to hook the Miles Electric up to and download everything he can get so Tails can analyze the data for clues. Since Sonic is no computer guy, Tails assures him that he only has to hit the "Go" button since he has customized it to have universal Wi-Fi accessibility. Praising Tails, Sonic jumps off the Tornado and lands on the Egg Fleet battleship. He then slips past an Egg Pawn and enters the battleship's interior.

Upon entry, he runs into a room full of Egg Pawns and an apparent Dr. Eggman who begins ranting about his genius. Sonic immediately calls "Eggman's" bluff, explaining that he already met the real Eggman a while ago. Having no choice but to tell the truth, the fake Eggman reveals himself to be Neo Metal Sonic. Sonic recalls the time he and his team took down Neo Metal Sonic, while the evil robot explains that he was stripped of his rebellious nature and was being upgraded to his current form again during the Eggman War. However, by the time his transformation was complete, the Resistance had already won the Eggman War. Neo took it upon himself to continue Eggman's legacy with the doctor's bio-data, using his persona to ensure that Eggman's rule remained unbroken. However, Neo knew that only the true Eggman could rule the Eggman Empire and let Sonic know that he would tell him the location of the doctor so that the robot could hand control over to him.

From this, Sonic understands why he did not face the true Metal Sonic during the Eggman War. Regardless, Sonic begins to battle Neo Metal Sonic before he has the chance to rule anything. Sonic manages to push the evil robot right back but Neo copies Sonic's bio-data in the process. He swiftly fights Sonic back, with the two finding themselves almost evenly matched. When crushed against a control panel, Sonic decides to retreat as he did not wish to take on Neo solo, as well as the Egg Fleet and his Badnik Horde. Sonic rushes out of the structure while Neo gives him chase. The robot orders for the batteries on the landing strip to fire at Sonic, only for the hedgehog to dodge all of it.

Neo Metal Sonic commands all hands on deck, wanting full armament and to surround and disable Sonic, yet wanting him alive. Sonic faces off against much of the Egg Fleet's artillery and Egg Pawns but still managed to take them out with quick maneuvering. Neo swiftly hits Sonic and grabs him by the throat, holding him over the edge. He demands once more that Sonic tells him where Eggman is but Sonic refuses, saying that killing him will not give him an answer. Neo counters this by stating that he still has Sonic's bio-data and his original plan, warning him to tell him or fall. Sonic simply tells the robot "I never fear the fall" and kicks him, allowing the hedgehog to free fall. Neo believes he is now the one true Sonic until he sees a saved Sonic on the Tornado with Tails. Neo Metal Sonic commands for there to be heavy gunfire on the Tornado, only to see that Sonic had destroyed them. Regardless of the damage, Neo considers himself to be the victor of the battle as he knew that Eggman was alive while Sonic knew nothing of his plans. With this, Neo commands his troops to stay on course to rendezvous with the rest of the Egg Fleet.

Back at Resistance HQ, Sonic finishes telling Tails, Knuckles and Amy of Neo Metal Sonic's return. Knuckles expresses his unhappiness in the robot's comeback, while Sonic confides in Amy that he did not manage to collect any data from the Egg Fleet. Knuckles finds relief in knowing Eggman was not the one responsible for the Badnik attacks, but Tails reminds the echidna of Neo Metal Sonic's high intelligence with Sonic's abilities and limitless stamina. Knuckles, annoyed, tells Tails to savor the small victories. Sonic, however, decides not to settle for that and plans to find a record of Eggman's old plans seeing as they could not find anything on current troop movement. Amy decides to put out a call to all of the Resistance, with hope that they can find out what's going on before it is too late. With this, the group put their hands together and celebrate victory.

Meanwhile, Neo commands the Egg Fleet into formation and to begin docking procedures. He menacingly wishes for Sonic to take his time as he believes he has already won. As he says this, the Egg Fleet moves in on Angel Island.