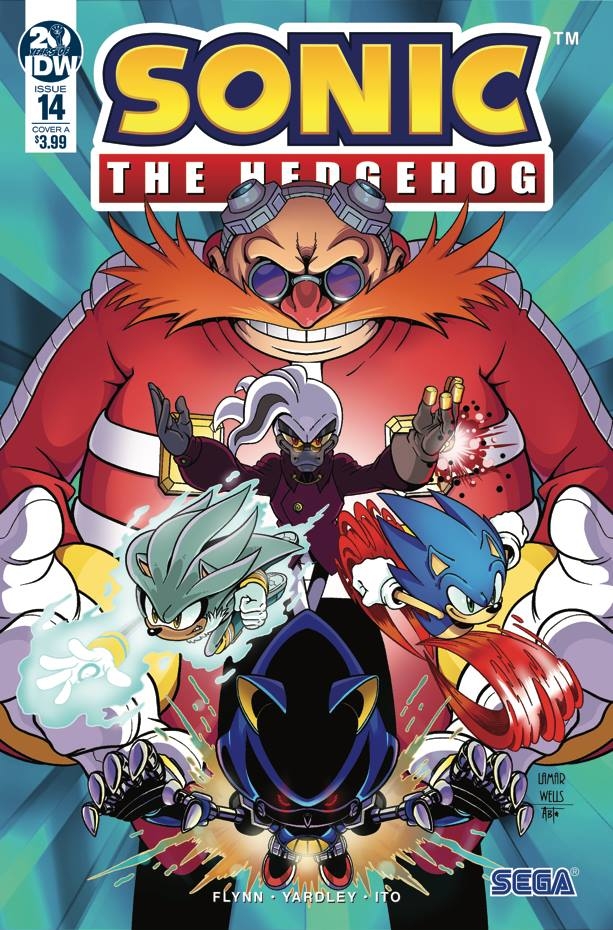 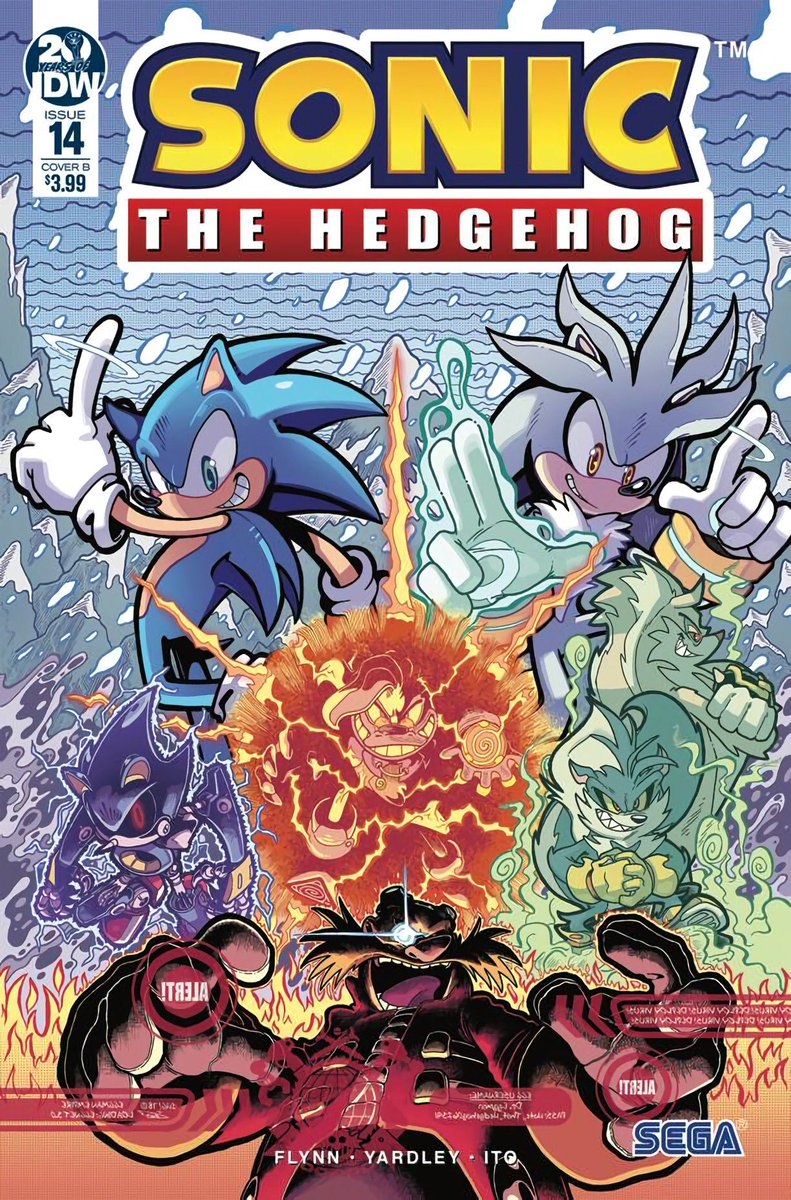 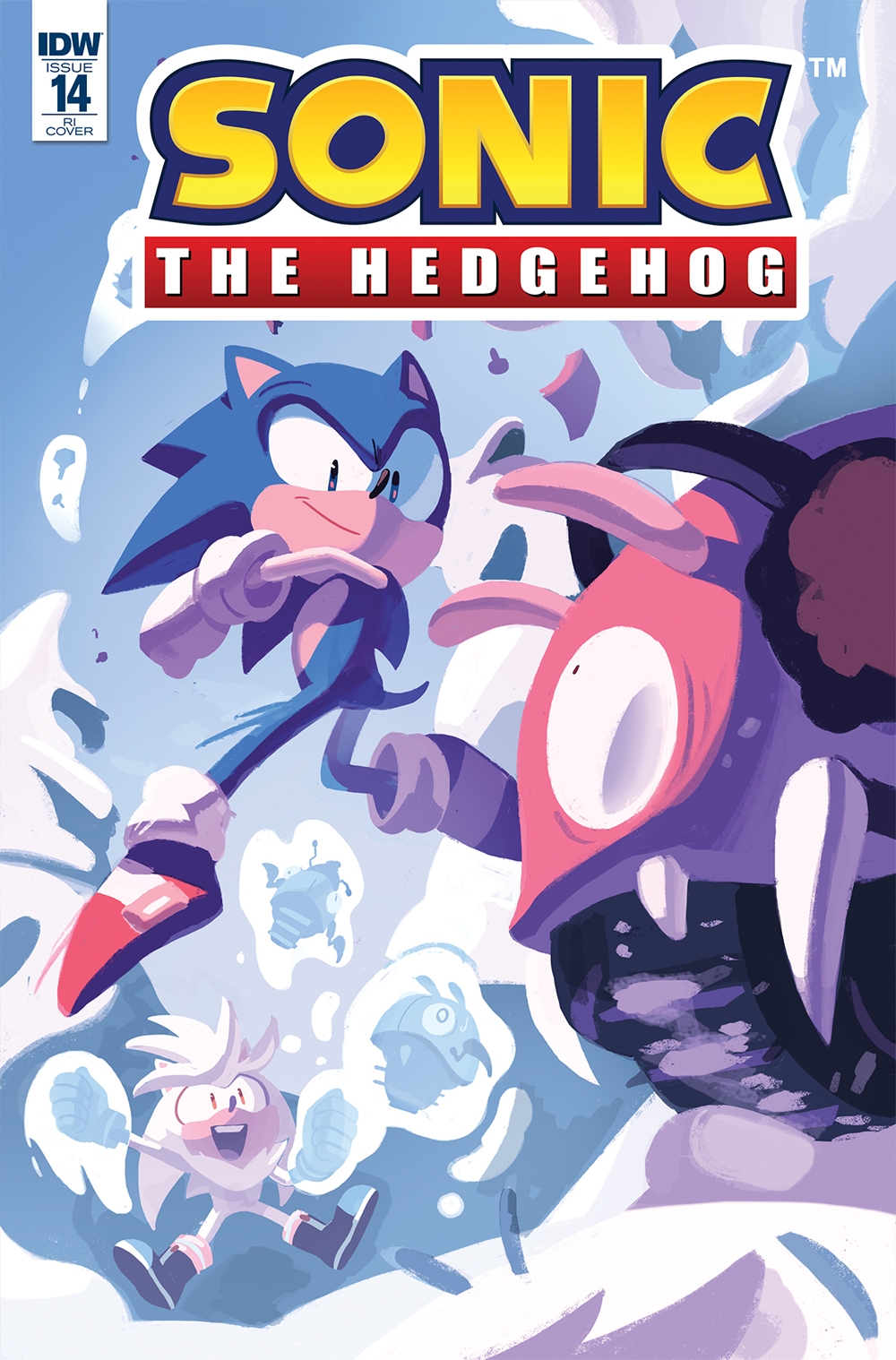 A helpful tip leads Sonic and Silver to an abandoned Eggman base suddenly teeming with activity. As the two investigate the action, an old foe returns and a new foe comes face-to-face with Sonic for the first time…

At Frozen Peak, Sonic and Silver are making their way to an Eggman base. Silver was told by a stranger that a base was located there. While Silver found this situation sketchy, Sonic tells him that it matches with what happened to Tails the other day. Sonic relays to Silver that they need to work with every lead they can get. The duo arrive at the Eggman base to find Badniks clearing out materials. Sonic and Silver attempt to stop them from progressing further but they are both attacked by a newly repaired Metal Sonic. Metal Sonic throws Silver aside and begins his battles with Sonic, leaving the hedgehog to ask if he was repaired by Eggman.

During the battle, Sonic mocks Metal Sonic allowing Silver to come back in time and pin Metal Sonic down. Suddenly, Metal Sonic is taken away by a wormhole, only to appear next to Dr. Starline. This surprises Silver as he recognizes him as his informant, while Sonic notices that the wormhole is similar to the one that took Rough and Tumble the other day. Sonic requests for Starline talk about what is happening, to which Starline introduces himself and reveals that he is the one that has been causing trouble as he wanted to meet Sonic in person. He claims that his encounter with Sonic will be the ultimate test of their willpowers and abilities. An annoyed Sonic shoots Silver a look to which the latter replies that Starline did not sound as creepy or crazy when he first talked to him. Sonic deduced that Starline was the one who broke Rough and Tumble free from prison and asks what he did with "Mr. Tinker". Starline replies that he managed to restore Eggman's memories.

Meanwhile at the Final Egg, Eggman is continuing to observe the Ricky he used as a test subject for the Metal Virus. He believes that a self-recruiting army would be handy but considering the slow spread on the Ricky, he knows it will not last. Eggman begins to wonder if repeated exposure to the virus will speed it up. To test it, Eggman gets the fully infected Pocky and pokes the Ricky with it. The Ricky quickly completes its transmutation, delighting Eggman. The doctor plots to set up the virus in several locations to begin the spread of the virus. Before he continues any further, he is interrupted by Rough and Tumble. Rough and Tumble angrily remind Eggman that their deal was that after they restore Eggman's memories he helps them take care of Sonic, demanding a new edge to be given as the weapons from their previous fight were not good enough. Looking back at his test subjects, Eggman gets an idea and tells them that they are in luck since his "latest weapon just got out of beta".

Back at Frozen Peak, Sonic and Silver begin to fight both Metal Sonic and Starline. Silver tries to grab Metal Sonic but the robot moves too quickly and manages to throw Sonic at him. Silver instead uses his psychokinesis to levitate Metal Sonic and throw him away. The duo then rush at Starline, only to be transported through a portal into the snow. Sonic attempts a Spin Attack at Starline only to be transported again but this time off of a cliff. Silver immediately goes after Sonic and Starline closes the portal after him. During this time, Metal Sonic returns to Starline. Silver manages to catch Sonic and brings him back to the surface. Sonic deduces that they on the opposite side of the mountain, meaning Starline must have scouted the area ahead of the battle. Sonic tells Silver to create a "lasso" around him using his abilities so that Sonic can quickly get back to the Eggman base.

After Metal Sonic gives Starline confirmation that everything was set up, the latter gives him the order to go back to base as he will give the heroes one last second to return. After a little while, Starline finds disappointment in the hedgehogs and prepares to return himself only to be hit by a Spin Attack from Sonic. Sonic grabs the platypus and demands him to give up details on Eggman. Starline quickly tells the duo that everything he knew was in the facility's vault and gave Silver the passcode required. Sonic demands to know where Eggman is and what he is planning. Starline tells Sonic that Eggman is not with him and is planning something "breathtaking" while he is planning on having the facility blown up following the detonation code input from Silver. Sonic quickly rushes into the facility to save Silver. Starline looks on to see the facility explode and celebrates his victory. He finds delight in his easy victory and as he returns to the Final Egg, he believes Eggman will too.

Once Starline gets back, however, Eggman has the opposite reaction. The furious doctor grabs Starline and tells him that Sonic is his to destroy. As they are nemeses, Eggman personally believes that he has to prove himself superior to Sonic as he could also pull off simple stunts like Starline did if he wanted to. Starline apologizes before Eggman lets him go and pulls up his security feed to show that the hedgehogs survived. Silver managed to put a force field up but the explosion still injured him. Eggman then asks Starline what he and Metal Sonic were moving as he had not used the base in years and all that was left there was obsolete junk. Starline replies saying that he found the objects treasured collectibles of his legacy. Eggman then asks how he found his first battle against Sonic to be, to which Starline says that the experience put a lot of new things into perspective for him.

Later at Restoration HQ, Silver is resting on a bed following his injuries. Sonic revealed he brought him to base, now saying that he still owed him a favor. Amy thanks Silver for saving Sonic and tells him to let her know if he needed anything. Sonic and Amy leave the room, talking about how Starline left without a trace. Amy realizes that with Eggman being back, his next strike on the world could be devastating as everyone has barely begun rebuilding. Sonic wonders where to start as they barely began to search all of his bases when Neo Metal Sonic was still on the scene. Amy pinpoints an unguarded base and plans to tap into his network without depending on Eggman. Sonic decides that Amy comes with him to the base as she came up with the plan, to which she accepts despite the work she needed to keep up with at Restoration HQ.