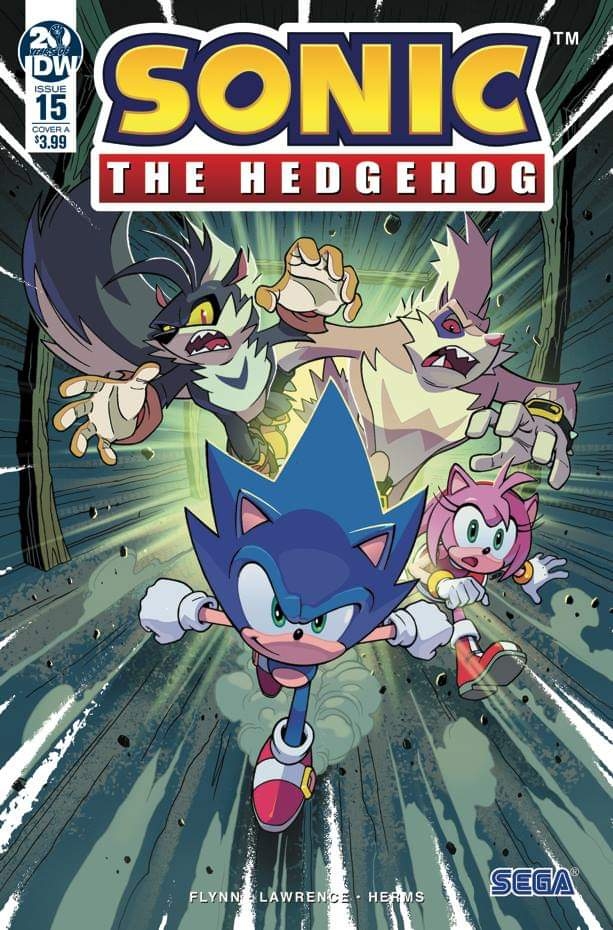 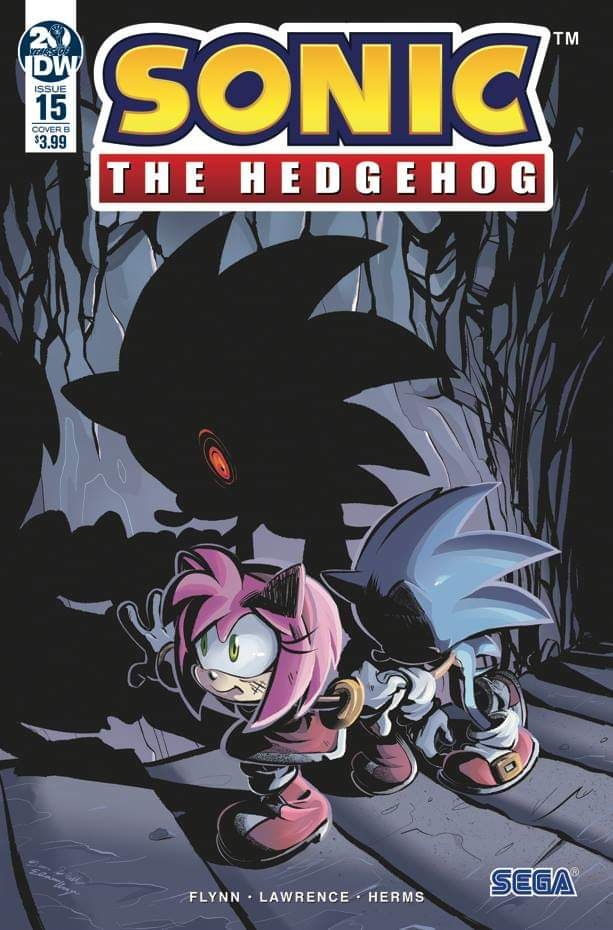 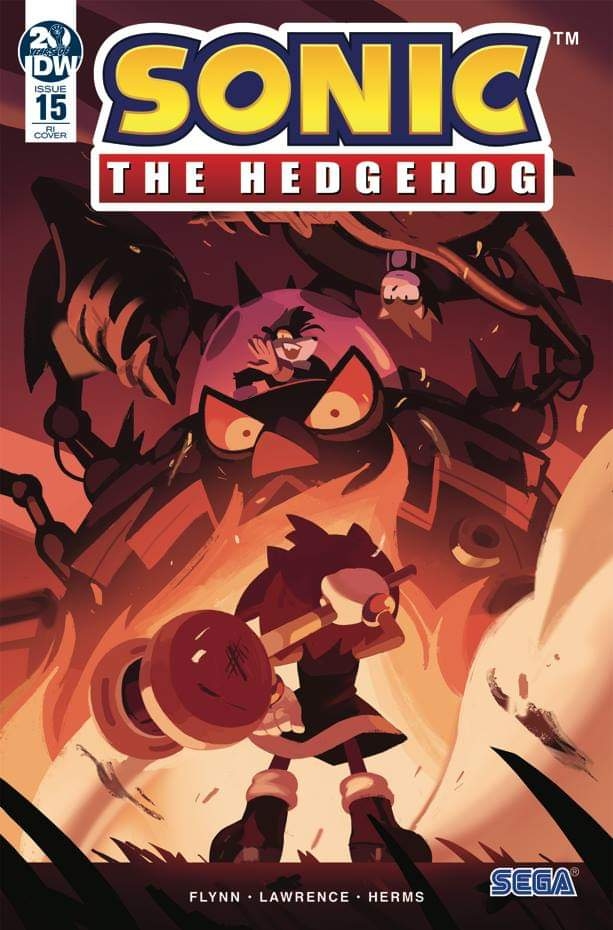 Having finally come face-to-face with Dr. Starline, Sonic needs to learn more about this new threat. He and Amy investigate an old Eggman lair but find it less abandoned than they thought when Rough & Tumble return for revenge!

Sonic and Amy arrive at Echo Mine, where the Resistance made one of their biggest counter-attacks against the Eggman Empire prior to Sonic's return. Amy says that they liberated several people, but took heavy losses in the process; Sonic comforts her, saying that she made that battle worth it. Amy refocuses on their mission; the computer in Echo Mine command hub will help locate Dr. Eggman by using the Eggnet, though Sonic suggests that the base could have already been emptied by Eggman. The duo arrive at the command hub and reactivate the power in the Echo Mine once Amy finds the backup generator. Sonic is disappointed that not even reserve Badniks were nearby as Amy begins to work on accessing files on the Eggnet; neither are aware that they are being spied on by a camera.

At the Final Egg, Eggman is putting his Metal Virus in containers, only to be interrupted by Dr. Starline's report that Sonic and Amy have entered his base located in Echo Mine. Eggman however, finds the hedgehogs' timing impeccable, telling Orbot and Cubot to send Rough and Tumble to meet him in Hangar Three. While carrying backpacks with the Metal Virus containers on top, Starline wonders how Eggman can he be so calm about the infiltration. Eggman simply tells Starline that he must learn to enjoy "dramatic deadlines" before arriving in Hangar Three. With the impatient skunk brothers threatening to take over Eggman's base (while kicking around Cubot), Eggman gives them the Metal Virus backpacks, telling them to use them if Sonic gets the upper hand. Tumble seems less than thrilled as Rough wonders if the backpacks give them "superpowers or something" before asking what they will lead with for their attack. In response, Eggman pulls down a tarp to show them his latest invention.

Back at the Echo Mine, Amy manages to log into the Eggnet, finding schematics for a contraption bearing a large resemblance to the Space Colony ARK. Amy confirms to Sonic that it is not the ARK; it appears to be smaller, with the schematics detailing something on "payload distribution". Before the duo can learn more, the computer shuts down, leaving Sonic to realize that Eggman has detected their presence in the mine. Sonic and Amy then witness the wall beginning to rumble, leaving them to quickly jump out of the way of an incoming tank driven by Rough and Tumble. They introduce themselves with their usual showmanship and rhymes, only to engage in an argument about their choice of rhymes. After shaking off her bemusement, Amy tries to smash the tank's drill with her hammer, only to be propelled backwards without leaving so much as a dent. Vowing to steal a rhyming dictionary later, Rough and Tumble decide to focus on their targets and begin shooting at the hedgehogs. Sonic carries Amy and starts running from the skunk brothers. The duo arrive at a refuse pit, realizing that they could only escape back out the way they came; however, Sonic notices that the path was barely enough to hold Rough and Tumble's tank, meaning they would not be able to turn around. Forming a plan, he exchanges a knowing smile with Amy.

Sonic speeds off down the path as Rough and Tumble crash through the entrance, making a hard right turn when they nearly drive straight into the pit. With his speed, Sonic manages to run up behind the tank and throw Amy overhead. Amy then brings out her hammer and smashes down onto Tumble's glass pod; meanwhile, Sonic performs a Spin Attack to destroy the tank's left treads. Both skunk brothers are forced to bail out and jump off of the tank as it falls into the pit, leaving them trapped between Amy and Sonic. The pink hedgehog demands to know Eggman's location, but Rough and Tumble simply engaged their back-up plan, pressing the buttons on their cross-straps as instructed. However, this only causes the backpacks to open up, spilling the Metal Virus onto both of the skunk brothers. The duo panic as the liquid engulfs them, destroying their backpacks as their bodies become metallic. Amy is horrified at the sight, realizing that the skunks have been turned into robots; Sonic grimly notes that they're something worse than mere Badniks.

Wasting no time, the transformed Rough and Tumble immediately attack Sonic and Amy. Sonic tries to agitate Tumble with insults, but the skunk ignores him as he presses his attack. While fending off Rough, Amy comments that the transformation has left the brothers soulless, leaving Sonic to ask if "Zombots" was a good term for them. After Tumble ignorantly dashes at Sonic once more, the hedgehog leaps over him and confirms the term.

Noting that talk did not work out on their normal forms either, Amy swings her hammer at Rough, tearing off his left arm and leaving a deep gouge in his body. The pink hedgehog is mortified by the damage, but Rough quickly regenerates, leaving Amy to realize that they cannot hurt the skunk brothers. Sonic is reaching the same conclusion as he performs more Spin Attacks on Tumble, only for the brute to restore the damage within seconds. Wiping his mouth, Sonic realizes that the Metal Virus liquid was on his hand after having touched Tumble; realizing what this means, Sonic quickly warns Amy not to let Rough touch her. This gives Tumble an opening to punch Sonic, spreading more Metal Virus on his head. Faced with a foe that cannot be permanently harmed and that is hazardous to touch, Sonic hits Tumble with a Spin Attack to force him into the refuse pit. He quickly does the same to Rough, delivering a fierce kick to his back as he prepares to pounce on Amy.

Despite the battle being won, Sonic is far from okay; his body is now covered in metallic patches. He confirms to Amy that the liquid that changed Rough and Tumble is infectious and spreading quickly. He then asks what he is supposed to do as Amy looks on in horror. Back at the Final Egg, Eggman looks on with glee, deciding to use the name "Zombots" as he felt it was catchy. When Starline asks what the next phase of the plan is, Eggman tells him that it was time to start "clinical trials": spreading the Metal Virus across the world.