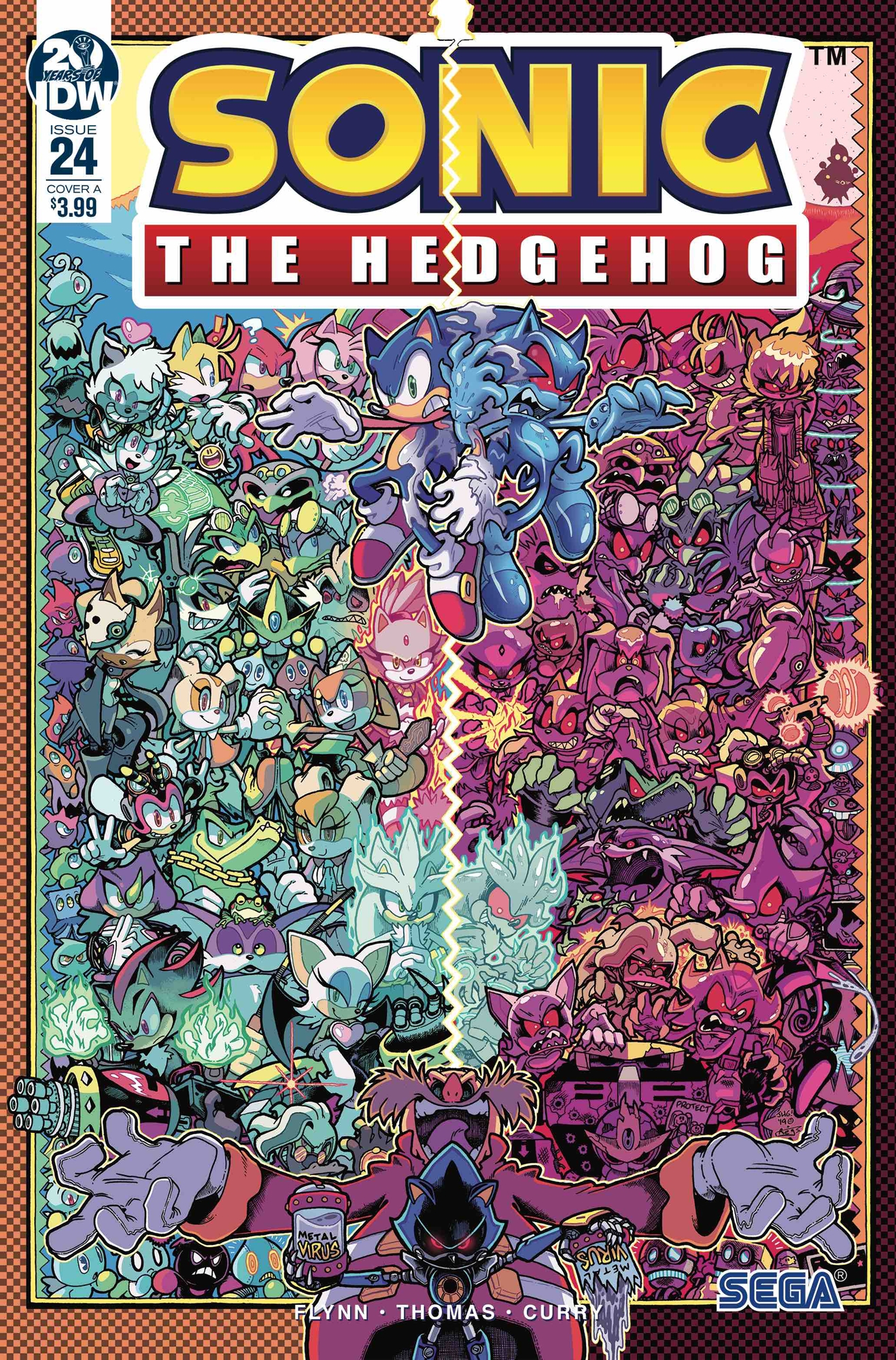 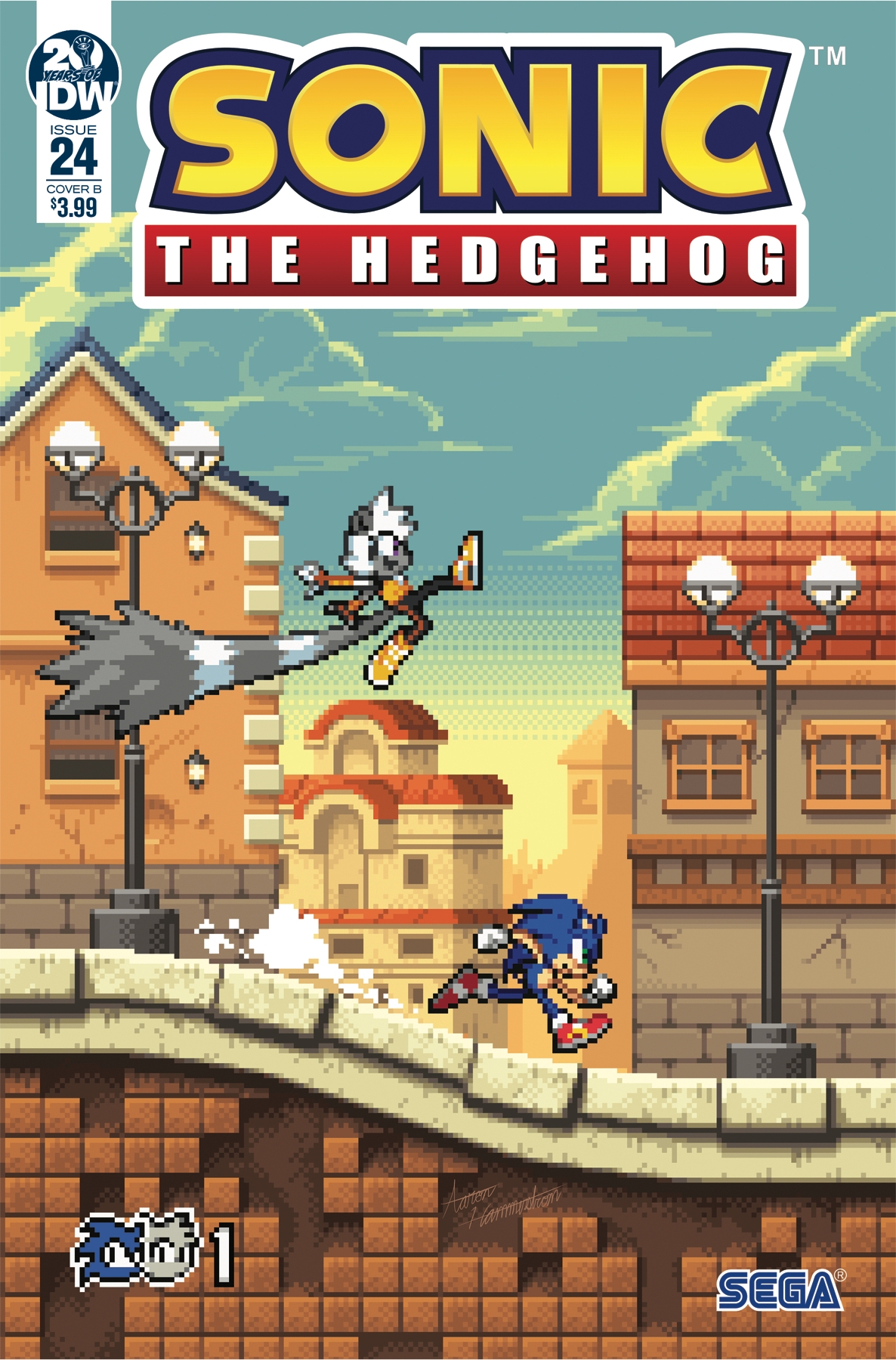 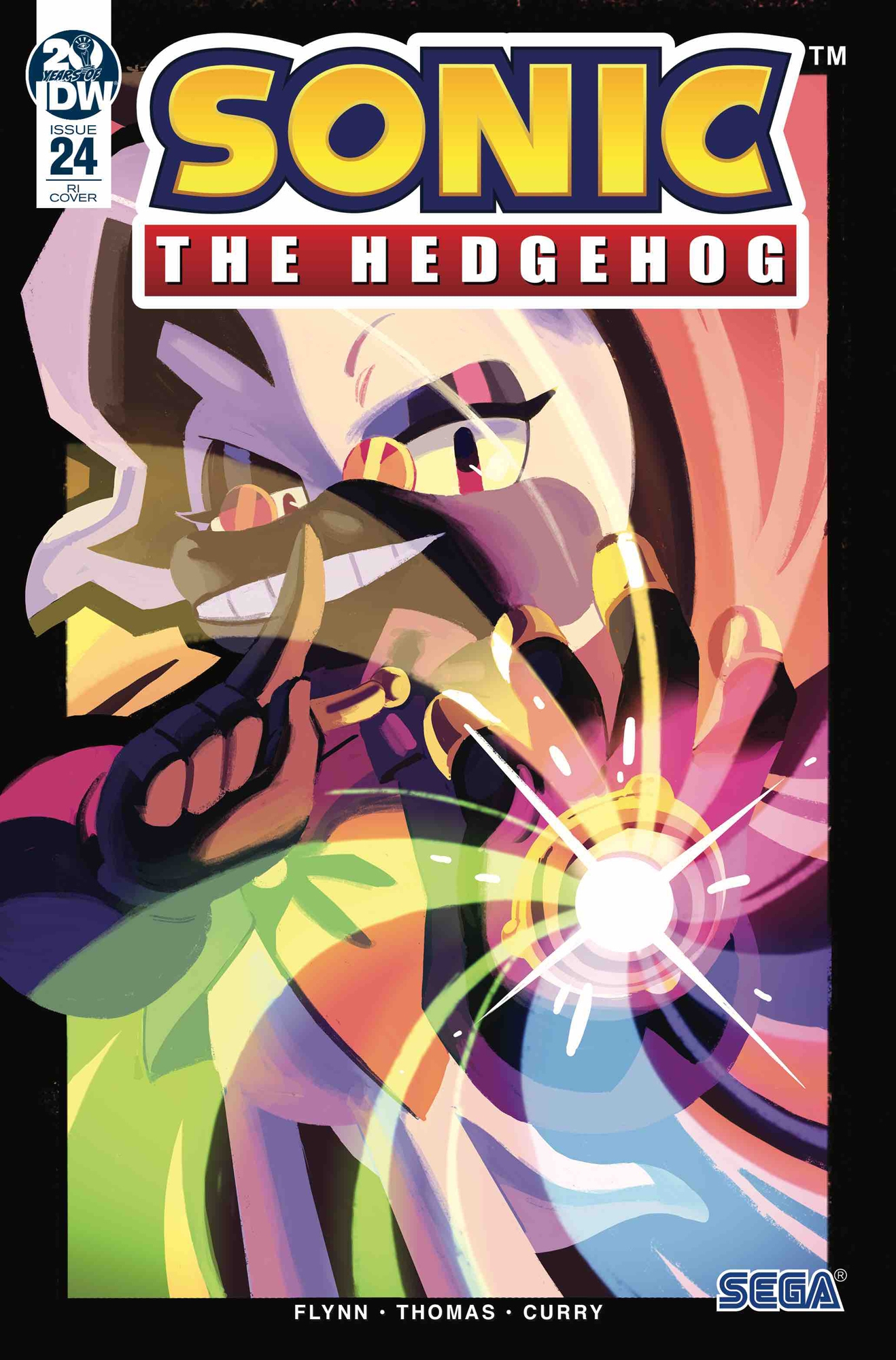 As the Metal Virus spreads, Tangle's hometown of Spiral Hill Village stands as one of the last strongholds of the uninfected. Sonic, Tangle, and the remaining heroes of the Restoration make a stand, but will it be enough?

The Last One Out[]

Sonic runs towards Spiral Hill Village; remembering that his first visit to the town was during an attack from Dr. Eggman's Badniks, he notes that things have not changed much since then. As he dashes inside and past some Zombots, he notices that the Restoration has already begun evacuating the uninfected citizens, and decides he should check in with Amy. However, he notices Espio fending off some Zombots on his own and goes over to help him out. After blowing away the incoming enemies, Sonic asks Espio if he is dealing with all the Zombots by himself; the chameleon replies that their numbers have grown thin. He explains that Amy and Gemerl are watching the escape shuttle, with Gemerl scanning everyone to make sure they are uninfected. Tails and Cream are airlifting any survivors they can find while Silver is managing the outbreak at Ice Paradise on his own; therefore, it falls to Espio to contain the Zombots alongside Tangle and Whisper. Concerned, Sonic asks where Vector is. Espio tells Sonic that he and Vector managed to find the Zombot Charmy and brought him back to Restoration HQ, though Espio regrets allowing Vector to do this and blames himself for what happened. Before Sonic can console him, Espio also states that he should not have let Sonic convince him to leave Eggman be in Windmill Village.

Though Sonic protests that it was "Mr. Tinker" that they were dealing with and the fact that they had no way of knowing that Dr. Starline was going to turn him back into Eggman, Espio tells Sonic that if they had dealt with Eggman back then, they would not have to worry about it. Sonic retorts by asking if they have to assume the worst of everyone and everything, showing no mercy and not giving any second chances. After an intense glare at each other, Espio stands down and states that they still have to save the villagers; Sonic agrees and tells him that he will see him at the shuttle. As the chameleon vanishes, Sonic pushes a horde of Zombots back into a building, struggling to close the doors on them. A spike ball made of pink energy suddenly whizzes past and cuts down a lamppost; Sonic narrowly dodges the lamppost and allows it to block off the doors. Looking above, he sees Whisper perched on a scaffolding and gives her a thumbs up, which she returns.

Using a group of Zombots to bounce over a gate, Sonic runs to meet Amy and the other Restoration members at the shuttle. She tells him that Espio, Tangle and Whisper were keeping the Zombots distracted while Tails and Cream found survivors; the rest of the Restoration has made a choke point that will allow Amy and Gemerl to handle any Zombots that do find them. They are nearly done with evacuation, but Amy notes that once they pull back for retreat, the Zombots will swarm them. Sonic takes this as his cue to cover the escape, planning to rendezvous with Tangle to see if she has any ideas on how to do so. Before Sonic heads off, Tails and Cream come by, though the hedgehog receives cold reception from the latter. Amy quietly explains that Vanilla had held back some Zombots in Restoration HQ so that they could escape and Cream had seen the entire thing. Tails asks Sonic if he had the data recorder with him, only for the hedgehog to reveal that he had lost it after running into Eggman. After a brief moment of silence, a tearful Tails states that he would not have been able to do anything anyway without a lab; regaining some composure, he tells Amy that they could not find any other survivors. Realizing that they've saved everyone they can, Amy turns to her teammates, telling them that it was time to retreat; Sonic plans to go find Tangle while Tails says that he will find Espio and Whisper. As the two head off, Gemerl approaches Amy and tells her that he performed a scan on Sonic; according to him, the hedgehog is exhibiting a level of infection higher than previous estimates should allow. Amy wearily asks for a simpler explanation, which Gemerl readily provides: Sonic's speed is losing its ability to stop the Metal Virus.

In the Mineral Museum, Tangle battles Zombots by pushing them back with chairs. When Sonic arrives on the scene and asks if anyone needs rescuing, Tangle tells him that the block was clear. Sonic tells Tangle that Amy was calling for a retreat but the two knew that they would draw attention to themselves if they attempted escape. When the hedgehog asks Tangle if she had any ideas to plug the bottleneck, she proudly announces that she does; she plans to have Sonic pick her up while that she wraps her tail around one of the lampposts and have him wind them up around the lampposts so that she could use her tail as a tripwire. When Sonic notes that the plan could work but Tangle would end up getting infected, she cheerfully brushes off the concern, claiming that she has got a solution for that too.

With the museum clear of hostiles for now, Tangle reveals that she came here to check on Jewel, only to find out that her friend was already converted into a Zombot. While she was able to contain Jewel, Tangle reveals that the beetle managed to infect her shoulder; she has been fighting cautiously to avoid turning too fast, but she knows that it is only a matter of time. A despondent Sonic apologizes to Tangle, stating that everything was his fault from the beginning and it may have been different if he listened to Shadow or did not let Metal Sonic go. After hitting a Zombot sneaking up behind Sonic, Tangle tells him that he did not bring Eggman back or weaponize Metal Sonic again, though the hedgehog notes that he has not been able to protect his friends or anyone else from the Metal Virus. The optimistic lemur reminds Sonic that there was still a group of survivors being protected on the shuttle, making the Blue Blur realize Tangle simply would not let this get to her. Tangle cheerfully agrees, explaining that she believes in Sonic the Hedgehog; he and his friends would set this right and cure everyone.

With his own confidence bolstered, Sonic quickly carries an excited Tangle outside to begin their plan. He darts between several lampposts, stretching Tangle's tail between them until the lemur asks Sonic to stop on the verge of pulling her tail off. The two heroes look at their makeshift tripwire as a few Zombots try to get through; Tangle tells Sonic to tell the others that she was sorry, noting that Whisper in particular would not take the news very well. Sonic thanks Tangle and shares a hug with her before she pushes him back and tells him to go, insisting that she has the situation handled. As the hedgehog dashes away, Tangle wipes away her tears and beats back the nearest Zombots, bragging that they may as well turn back; as her former neighbors, they should know they she won't let them through.

Sonic gets back to the rendezvous point, asking the shuttle to lift off while he rides on the outside. When Amy asks where Tangle is, Sonic informs the team that she had been infected and decided to stay behind to cover them; he goes on to say that Tangle had said she was sorry but notes that heroes have nothing to be sorry about. As the heroes stand shocked at the news, Whisper cries out for Tangle and attempts to run back into the village. Amy holds the hysteric wolf back and asks Sonic for help, but he makes it clear that he could not for fear of infecting Whisper. Instead, Whisper's Wisps emerge and help pull her back onto the shuttle. Amy calls out for lift off; as the shuttle begins to move, Sonic jumps from a rooftop onto the exterior of the ship.

As the shuttle flies over Tangle's head, she quietly asks the Restoration not to keep her waiting too long before continuing to fight the Zombot horde. She momentarily jumps as the infection reaches the base of her tail, but she refuses to give up. Desperately crying that she can still fight, she delivers a final punch that freezes just before contact; the transformation is finally complete. The new Zombot begins to walk alongside the others as Sonic solemnly looks back at the village; inside the shuttle, Whisper cries into Cream's lap as the Wisps try and comfort her.

Later, aboard the Faceship, Starline reports to Eggman that he believes he has a solution to the ongoing problem of not being able to control the Zombots. Eggman dismisses this, saying that he told Starline he would figure something out, and asks to stop being pestered. This proves to be the last straw for Starline; after a moment to gather his confidence, he says "No sir. I insist." before using the Warp Topaz to bring the Deadly Six onto the ship.