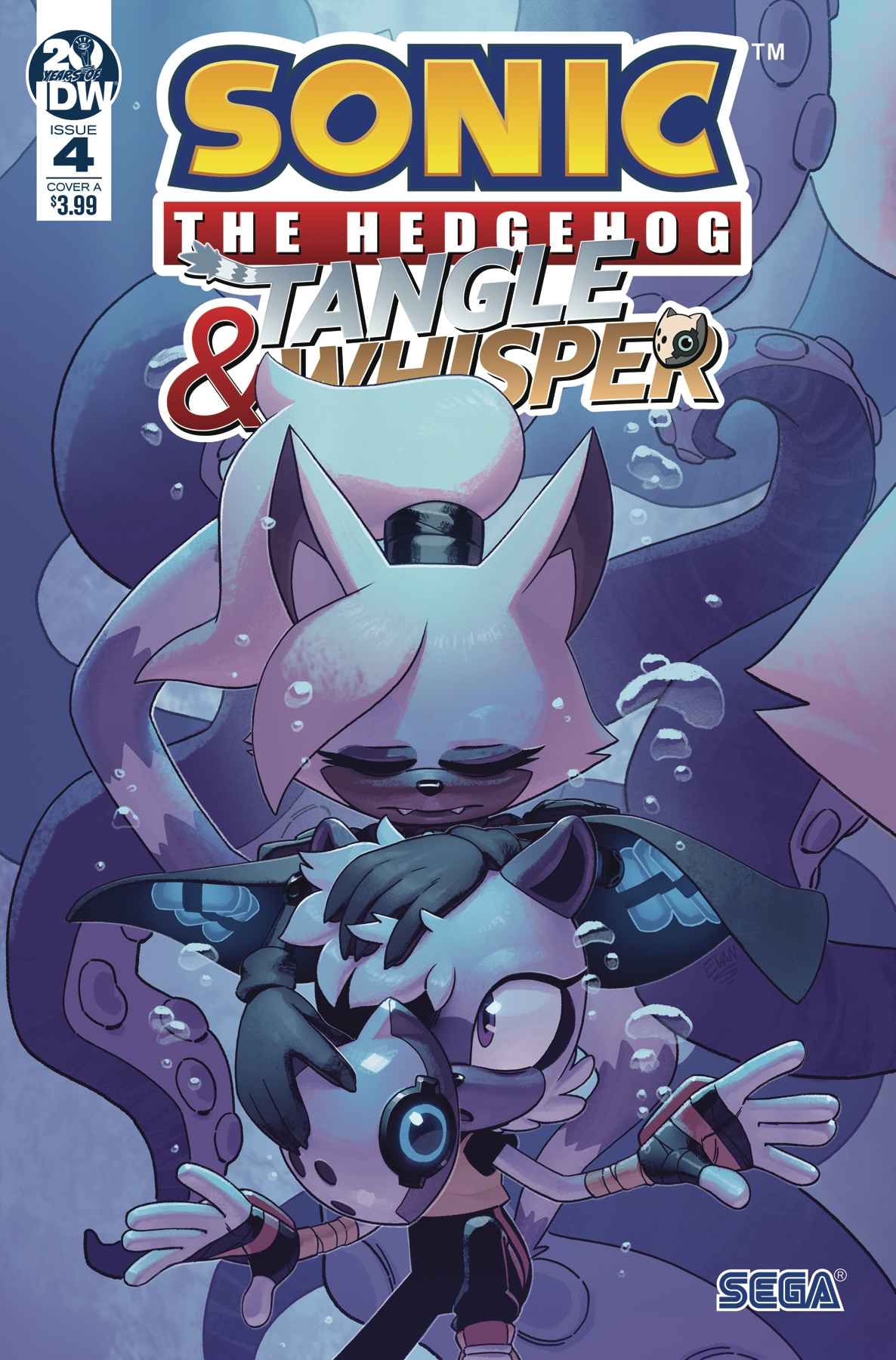 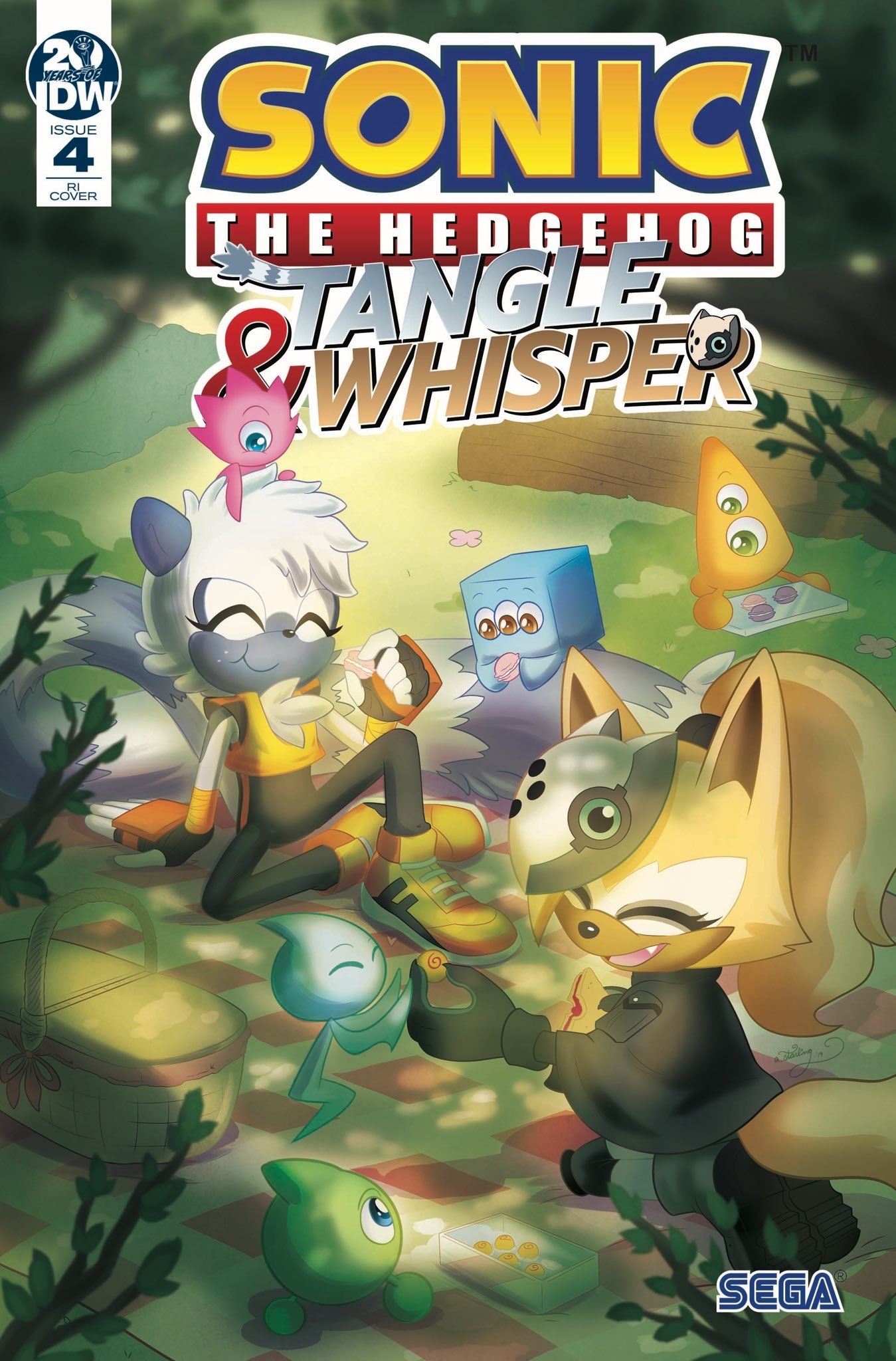 This is it! Whisper's ready to confront her old foe, and Tangle's more than happy to back her up! Of course, if the bad guy knows he's walking into a trap, he's going to be prepared, right? Maybe this won't be so easy, since he's got a Badnik army backing him up! The final fantastic issue of the first Sonic the Hedgehog mini-series in almost two decades!

At the former Diamond Cutters base on the Clove Sea, Tangle looks out into the horizon, realizing that she and Whisper must have really ticked off Mimic and Dr. Eggman. While watching the approaching squadron of Badniks approach them, Tangle jokes that it did not seem like a fair fight for the robots. She then turns to Whisper and mentions how she struggled with a Buzz Bomber battleship back at her home town and wondered how they would be able to face two. Ready to demonstrate, Whisper uses her Variable Wispon to shoot at one of the Buzz Bomber's torso, which damages it enough to end its flight. The Buzz Bomber crashes into another Buzz Bomber and takes it down with it. Tangle praises Whisper for her shot and cheekily wonders if Mimic was on either of the battleships, to which Whisper replies that he was not and was instead using the Buzz Bombers as decoys while he would be sneaking into the base by now. Tangle realizes from this that she had to begin the plan but still offers to fight the Badniks alongside Whisper. Whisper assures her that it was fine. Tangle then reminds her that this was her home but the wolf once again assures her that it was fine. Following this, Tangle runs off while Whisper readies her weapon. As the Blowfish Transporter lands on the dock to release several more Badniks, Whisper uses the Variable Wispon's Rocket Mode to destroy the docks to force the Badniks into the water. After doing so, Whisper hugs her Orange Wisp. She quickly turns her attention back to the regular-sized Buzz Bombers who began to shoot at her.

Inside the base, Tangle waits by the side of a door. As a shadow approaches, she extends her tail to trip up the person entering. The person is revealed to apparently be Sonic, who had heard that someone was impersonating him and came to help Tangle and Whisper fight him. Tangle asks how Sonic how he got to the base, to which he says that he arrived with Tails on the Tornado, who he claimed was outside helping Whisper manage the Badniks. Initially skeptical, Tangle almost immediately changes her mind and decides to lead Sonic over to the trap she and Whisper laid out for Mimic. In the rec room, Sonic only finds the three masks that belonged to the other deceased members of the Diamond Cutters hanging on the wall and asks if this was the trap. Tangle, now with an angry expression, confirms that this was indeed a trap and presses a button that activates the masks. The masks act as projectors for past video footage of Claire, Smithy and Slinger respectively praising Mimic for his work. Whisper is also shown off, who had stated that she felt so much better when he was down there watching their backs. As Tangle asks "Sonic" if his deeds were worth it, the latter shapeshifts back into his normal form and states that the Diamond Cutters were never his friends nor comrades, but only a means to an end. He only joined the Diamond Cutters to reap in the rewards. When the Diamond Cutters' crusade put his life on the line, Mimic states that it was not a difficult choice to make to betray them as, the way he sees it, heroes become martyrs and professionals stay alive.

When Tangle declares that Mimic is the worst, he tells her that she is deluded, saying that friendship is a weakness. To prove his point, Mimic shapeshifts into Jewel to prevent Tangle from punching him. Mimic taunts Tangle into punching him, much to her annoyance and fear, but the lemur attempts to do so anyway. Mimic flips Tangle and pulls out his dagger, saying that though he is done with her he will still use her form to get close to Whisper. Tangle sneakily manages to punch Mimic from behind with her tail and proceeds to engage in close combat. Due to Mimic's advanced training, he overpowers Tangle by hitting her with her own tail and forcing her backwards. Retrieving his dagger, Mimic says that with some training Tangle would be formidable. Before the octopus can attack Tangle, Whisper enters and hits away his dagger with the Variable Wispon in its Cube Mode. Mimic turns his attention to his former Blue Wisp, reminding it that it hated violence and asked if it would let itself be used on him. After a short pause, Whisper swings at Mimic, only for the Blue Wisp to swiftly exit the Wispon and turn away in shame. With the Variable Wispon still in its default mode, Whisper hits Mimic with it and begins to struggle with him. Mimic manages to push Whisper back and turns the Variable Wispon towards her, only to be grabbed and slammed downwards by Tangle's tail. Not wanting to give up, Mimic struggles within Tangle's grasp and attempts shapeshifting into Smithy, then Eggman and finally Vector. Tangle warns Mimic to stay down.

Whisper then points her Variable Wispon at Mimic's head, with the Blue Wisp looking on in disappointment at his former partner. Tangle moves before Whisper to convince her that there was a difference between shooting Badniks and shooting Mimic. She says to the wolf that she knows what Mimic did was unforgivable but if she shoots him, she would live with it for the rest of her life. Tangle suggests that it would worse if Mimic was caught and live with the shame of losing Whisper after his failures. Whisper gently turns to the wall where the other Diamond Cutters' masks were and looks at them with sadness. Whisper then says that Tangle is correct and the Diamond Cutters are done. The wolf hugs the Blue Wisp and tells it that she did not blame it. Whisper asks what they were going to do with Mimic and Tangle replies that she had no idea but knew a genius who would.

Later, at Tails' workshop, Mimic has been imprisoned in a Test Chamber built by Tails, who states that the contraption could run models through all sorts of artificial climate and atmospheric conditions, meaning that Mimic could not escape. As Tangle praises Tails, Mimic states that he has manages to escape several containments before and Tails' creation would be no different. Whisper warns Mimic that they will "bury" Mimic deeper each time he tries. Mimic then taunts her, saying "If only the others could hear their bubbly little Whisper now." Tangle enters the conversation to note that if he did escape, Eggman could find him and exact his anger on him for having wasted several of his Badniks. From this, Mimic simply expresses his dislike for Tangle and the lemur lets him know that the feeling is mutual. Tails tells Whisper that he will have the cell transported to the nearest jail as soon as he could. Whisper and Tangle thank Tails for his help and leave his house. Outside, Tangle asks what Whisper was going to do now. Whisper states that as Eggman was still out there, she would keep fighting until he was gone. As the wolf tears up, she asks if Tangle wants to come along with her. Tangle accepts the offer but says that she wishes to take some time off back at home as she is homesick and is not wishing to worry Jewel too much. The girls thus share a friendly fist bump and set off in their different directions.