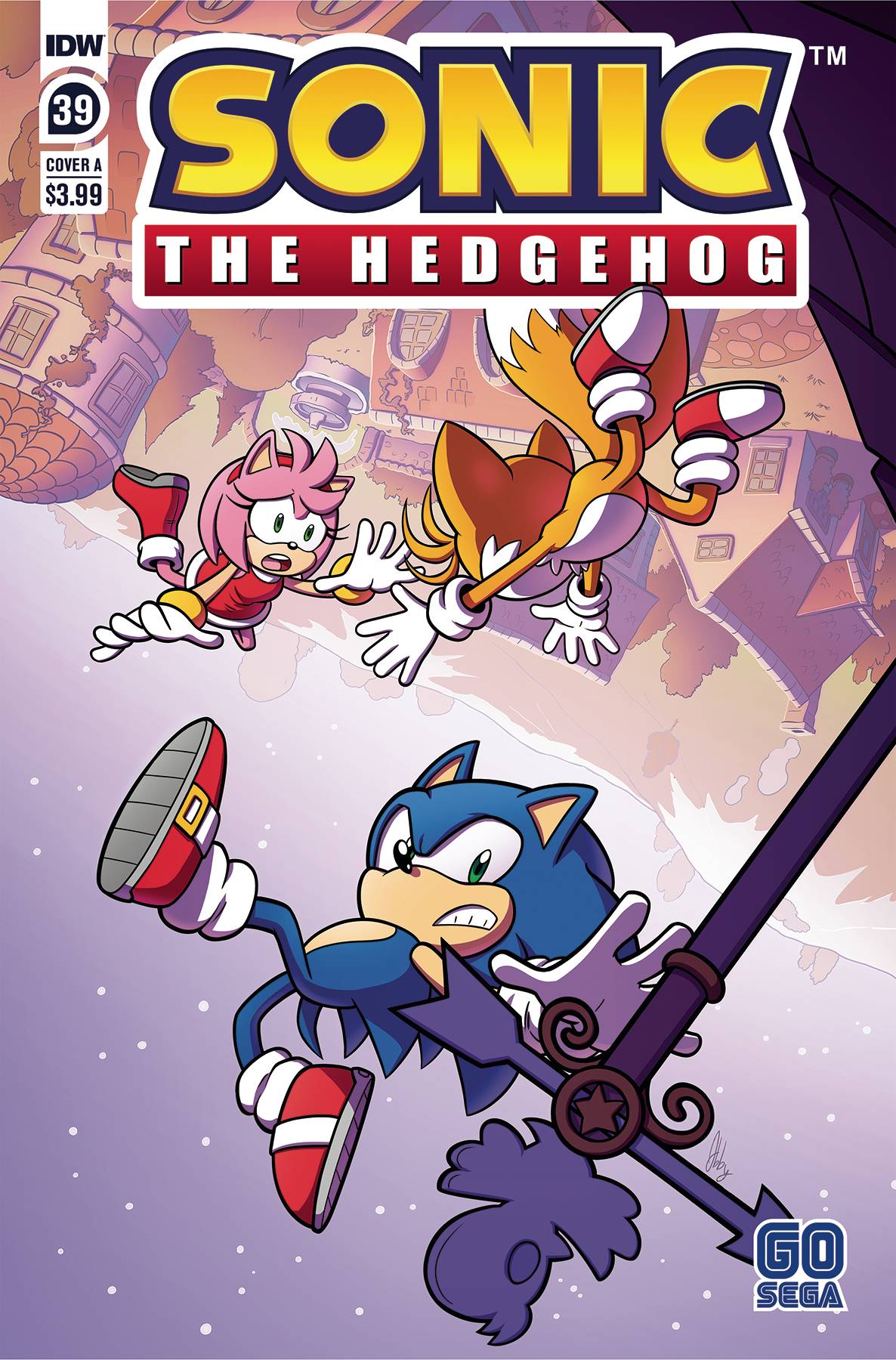 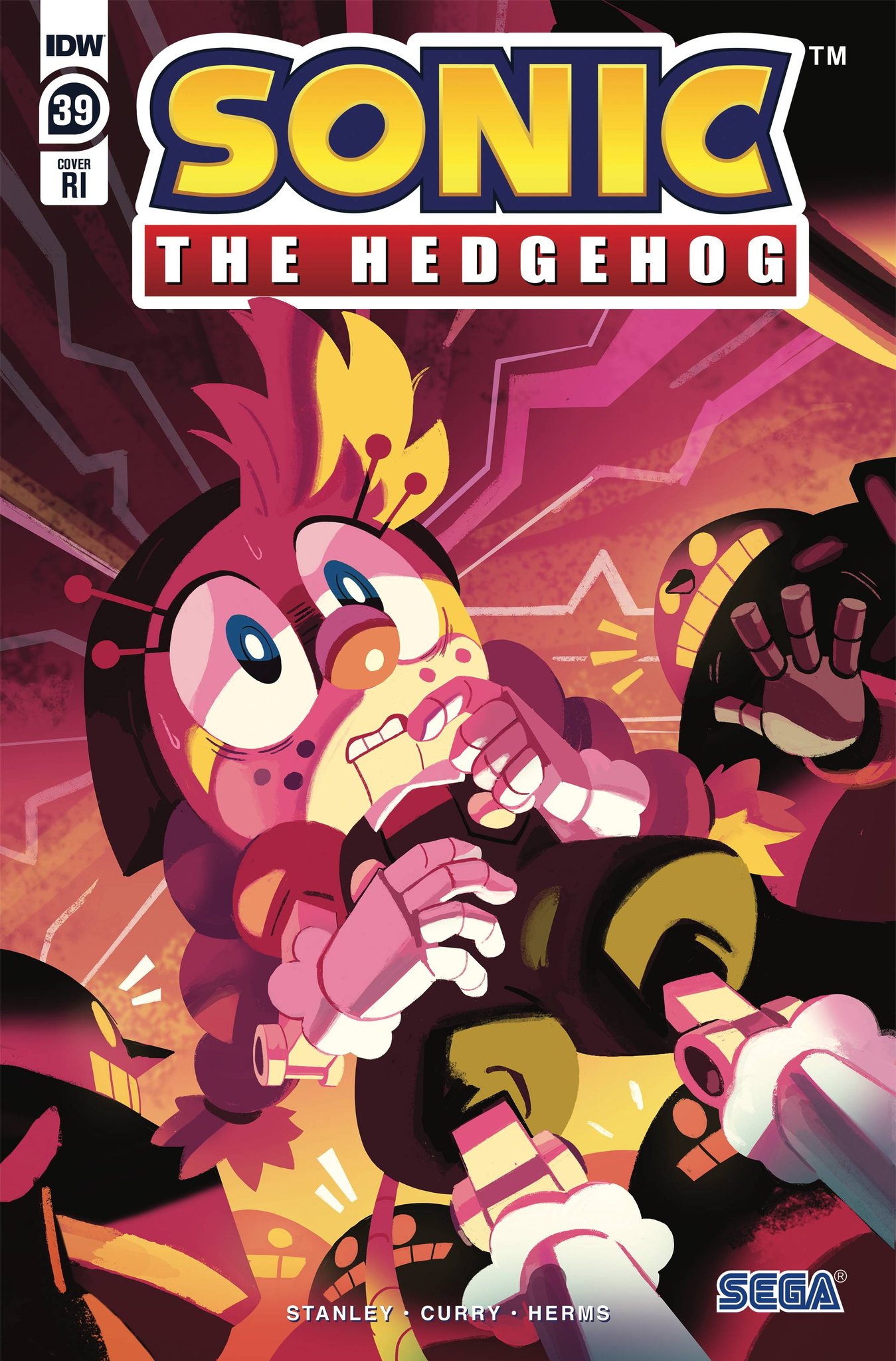 Tangle and Belle eavesdrop on Orbot and Cubot making more Quasi-Badniks to keep the test chambers occupied. After making it, the pair send it off. Belle wonders if the Badniks were being sent to Sonic and the others. Tangle simply tells her to watch her work. After Orbot and Cubot find disappointment in another Quasi-Badnik, Tangle knocks over some wires. Once the pair of robots' attention is turned to this, they are grabbed by Tangle with her tail. Meanwhile, inside the test chambers Sonic, Amy and Tails prepare themselves for Eggman's attack, with Sonic stating that it will not work. Eggman retorts that his plan is working effectively. According to him, every move the three of them made, alongside their avoidance of his traps, provided data to him on how he can make his technology better in the future. As he expresses his excitement over this, a test dummy catches on fire and begins to burn the house down. The trio smash their way out of the house. Sonic then asks Tails if he has managed to calibrate his Miles Electric to track the Badniks' signals, which he has. Before Sonic can grab Tails and Amy and take off in the direction of the source, gravity in the area is inverted, forcing everyone to float.

Upon figuring out Eggman's methods of intervening, Sonic grabs Amy and begins hitting Badniks while Tails follows close by. The hedgehog asks what they were supposed to do next, which Tails did not know as he was not picking up any sort of unusual readings. As gravity did not seem as if it was returning to normal, Tails wonders if Sonic wished to go along with it, considering they did not know what was up above. Sonic says that Eggman wanted to show them something, noting that the doctor would never throw away a chance to show off. As Tails deduces that he could not do this if they were dead, Amy finds Sonic's leap of faith to be romantic. Sonic tries to clarify that this was not what he meant but discards the conversation, with Amy teasing him to hold her extra tight. As they venture further in the space, Tails believes that they should have tried to gather more evidence. The trio come across a tesseract area in their path. Landing there, Sonic calls out to Eggman. The cube disappears to reveal a room full of more gates. Through one, a new version of the Egg Viper appears. It attacks the trio with an electric attack, which they manage to dodge.

While Amy notes that the mech was not cute, Tails says that a high-voltage attack like that is very dangerous. Sonic mentions how he has dealt with a similar kind of robot before, stating that its new coat of paint and attacks would not be enough to stop all of them. Eggman has the Egg Viper launch a platform at them, only for Amy to hit it back with her hammer. As the mech halts, Sonic bounces up its tail to land a hit on it. However, before he can actually do it, he is electrocuted. Tails manages to save him and throws the hedgehog toward the cockpit of the new Egg Viper. After successfully destroying the mech, Sonic taunts Eggman, telling him he might as well quit now. A hologram of Eggman shows up instead, giving the hedgehog his props, but challenges him to a round two. The mech explodes, propelling Sonic backward. The gates around the trio activate, allowing three new versions of the Egg Viper to come out. Elsewhere, Eggman finds it to be a fair fight and states that he will not crush them quickly as he has not had this much fun in ages. The red Egg Viper launches itself at the trio engulfed in flames. Amy manages to hit it back but small flames catch onto her dress. The blue Egg Viper launches two jet streams of water at them, creating a pool. Tails manages to rescue Amy and an unamused Sonic. The green Egg Viper then creates cyclones to catch the trio off balance and force them to fall. Eggman awards himself a point and plots to finish them off.

Back at the control room, Orbot refuses to tell Tangle where the others are. The lemur attempts to get this information from Cubot by using reverse-psychology, but Orbot warns him not to fall for it. The red robot mentions how a troop of Egg Pawns will soon arrive, only for Belle to say that she redirected them using Orbot's tablet. The robot calls Tangle over to show her something as Orbot and Cubot wonder if Belle was one of theirs. Tangle and Belle watch a live feed of Sonic, Amy and Tails fighting against the Egg Vipers. Tangle states that they have to get in there and wonders if they are close. Belle says that she does not know as she could not find the room anywhere in the schematic of the tower. They notice how there were gates were all over the place but realize that it would take a while to figure out which ones were connected. In an attempt to narrow it down, Tangle feigns trying to enter into one gate but then tries to go into another. Both Orbot and Cubot yell for her not to enter, prompting Tangle to ask if it would be a bad gate for her to go through. Orbot tries to defend himself to no avail. Tangle then ties her tail around a pipe and asks Belle to keep an eye on Orbot and Cubot. The tinkerer realizes that she was going to jump into the gate, an idea she disagreed with. Belle states that they had no idea how it works and suggests disastrous things could happen, such as her molecules getting scrambled or being split in half with one half ending up in the ocean. Belle requests to be given more time with the tablet, only for Tangle to refuse as Sonic, Amy and Tails needed help straight away and there was no time for second guessing. She further states that trusting your gut and accepting the consequences was just something that heroes do and asks Belle to trust her. Reluctantly, Belle steps out of the way and allows Tangle to run into the gate.