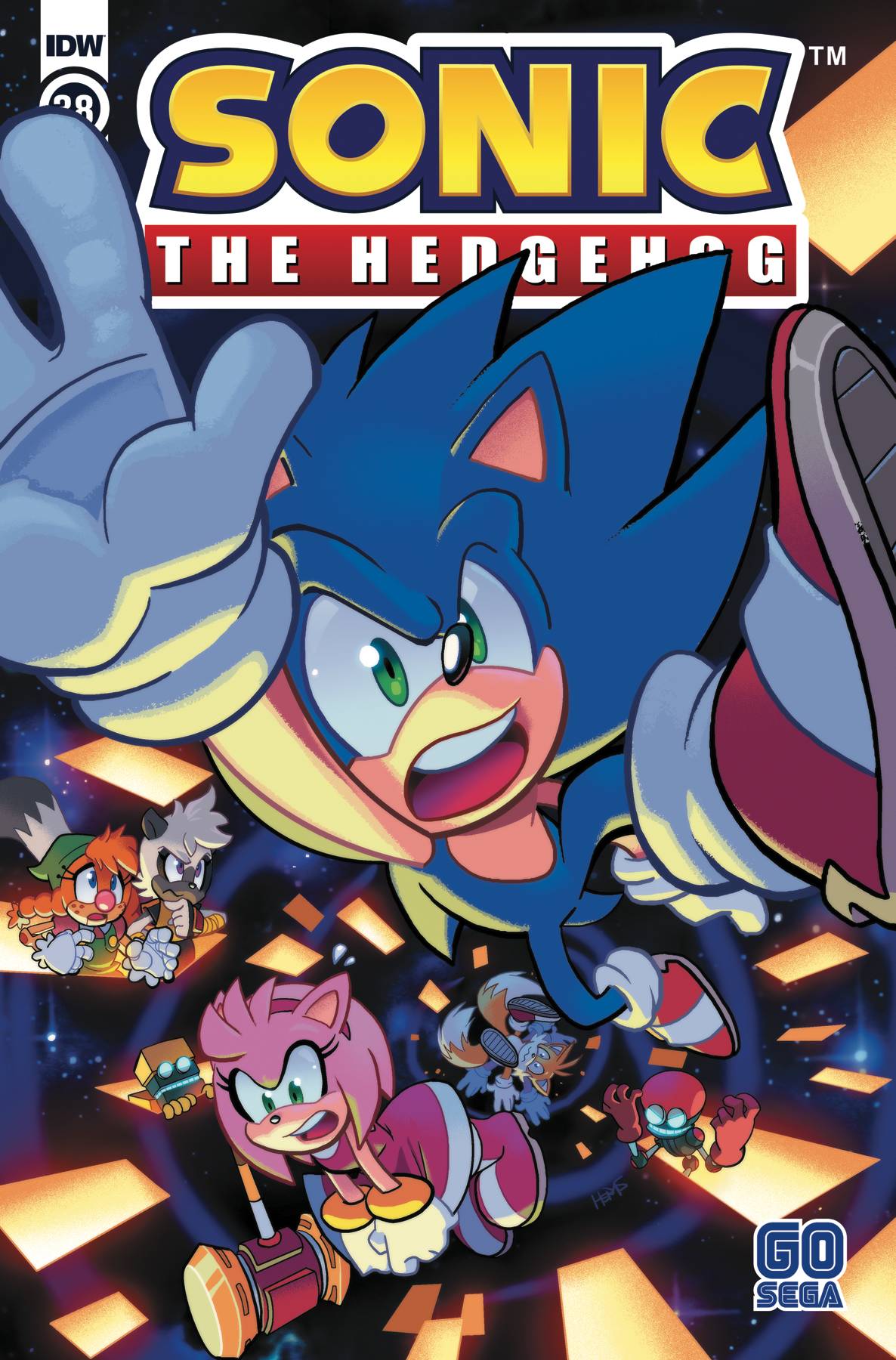 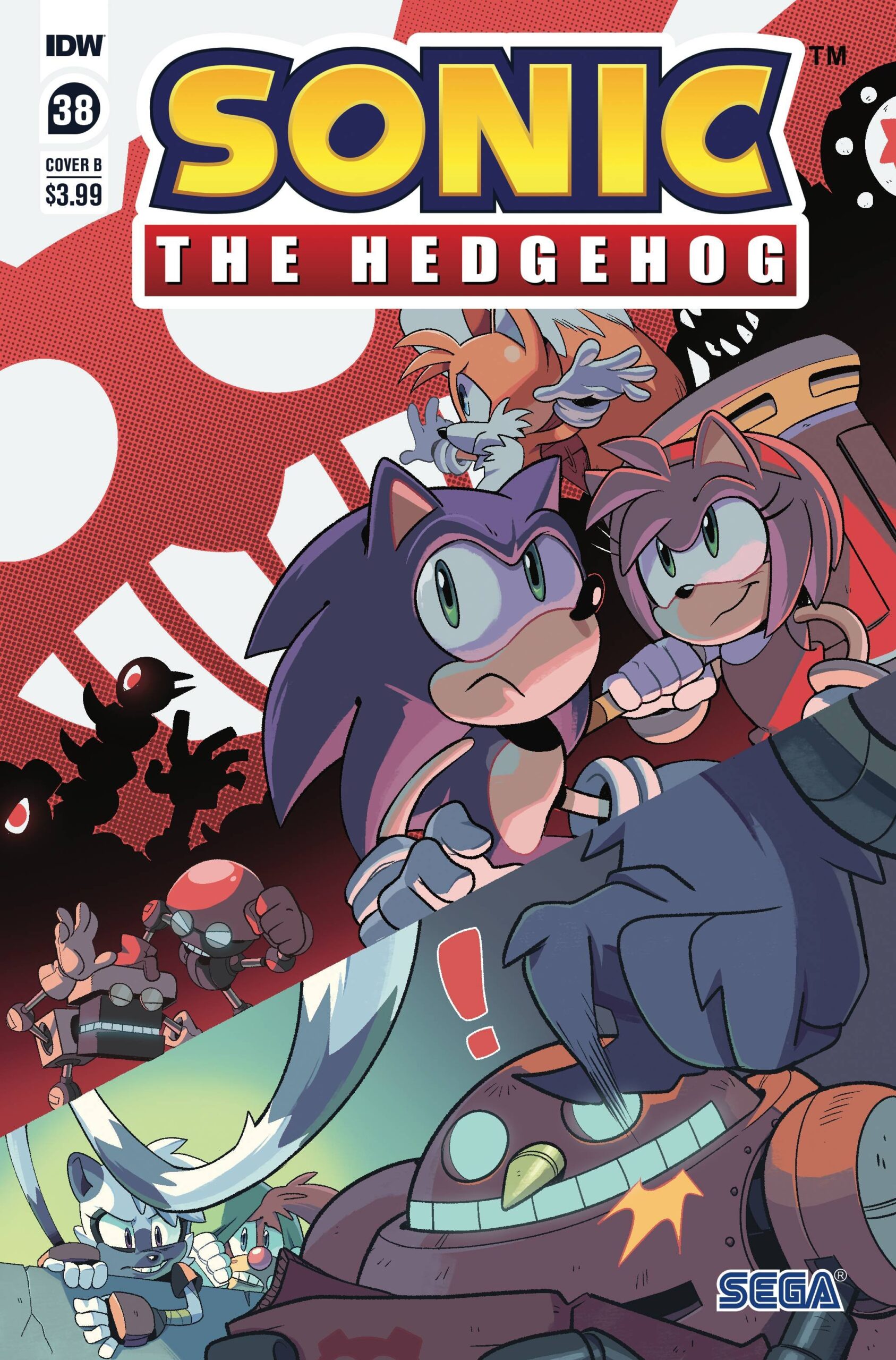 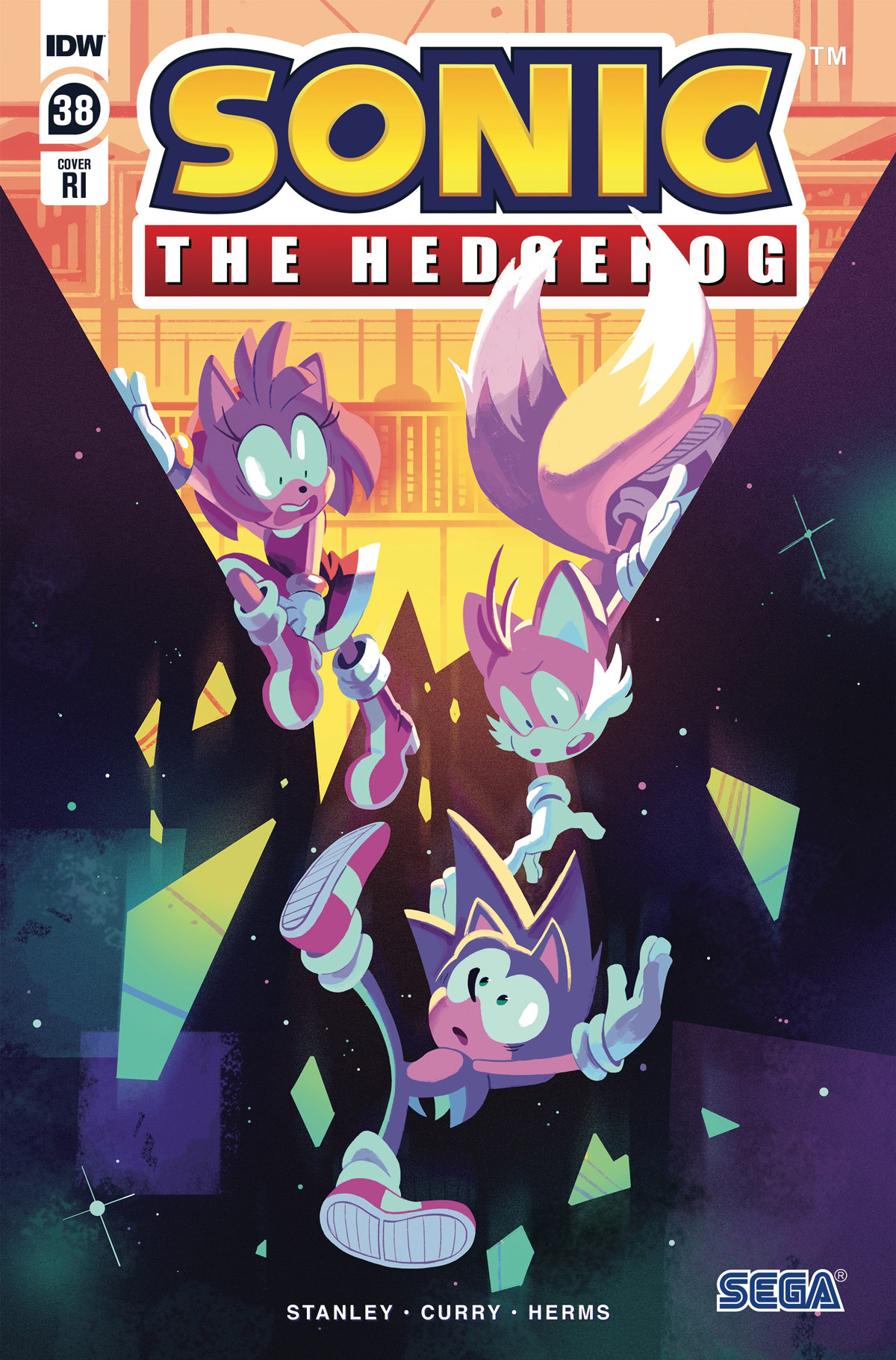 Sonic, Amy, and Tails continue falling through the unknown space area, with the latter finding the area fascinating. Tails grabs the other two and flies them away from giant falling debris. When Sonic asks if Tails has a theory about the area, the fox cub guesses that Dr. Eggman created a space that can ignore normal spatial laws, allowing him to construct giant tessellating structures with no limitations. Sonic wonders if it is a trap, with Tails saying that it might be, but due to how easily they broke out, he is not sure; Eggman knows what they can do, and if he meant to trap them, he would have compensated for that. Tails soon spots a door, making him believe that the area was not as big as it looks. He flies toward it with Sonic and Amy in tow. The trio land in a new area, with Tails saying that his hypothesis was now a theory. Though Sonic is glad to be back on the ground, Amy tells him not to celebrate so early as the new area they were in gave her the creeps. It appeared to be a modern setting neighborhood but all of the houses looked the same, albeit with different color schemes.

Tangle and Belle manage to reach the tower. Tangle accidentally crashes the Extreme Gear, leaving them without a transport for the future. Despite this, the pair see a few trashed Egg Pawns on the ground, realizing that Sonic definitely came this way. While Belle gets slightly distracted at the sight of an Eggman Empire decal, Tangle beckons her over to come crawl through a vent with her. They go to a room to see several Badniks working on something while walking through mysterious doors. Ignoring this, Tangle climbs upwards while carrying Belle and the pair find their way to a computer hub where Orbot and Cubot are and decide to eavesdrop on them. The two robots discuss if a Pawn squad managed to get a hole fix, only for it to be reported that they got lost. It is then requested for another one to be sent. With this, exasperation is felt over how Sonic and the others found out about the base. Orbot initially believes that they were stuck in Chamber 1, only for Cubot to tell him that they were stuck in Chamber 2 instead; both robots are surprised that they can even do that. With no other options, they reluctantly decide to call Eggman.

Though the pair hope the doctor does not pick up, Eggman answers the call and demands to know what was going on quickly as he was busy. Orbot and Cubot tremble with fear as they tell Eggman that Sonic and his friends broke into the test chambers. They brace themselves believing that they will get yelled at, only for nothing to follow. As the robots share their confusion, Eggman smiles at the new news as though it was unexpected, it was not unwelcome. He states to Orbot and Cubot that he will take it from here. Belle turns to Tangle and asks if that was Eggman, which she confirms; if he was planning something, they really needed to find the others. Suddenly, Belle slips between wires and falls onto a landing in front of trio of Egg Pawns. The Egg Pawns stare at the stunned Belle for a few seconds but swiftly ignore her and walk away. As Belle sits confused, she is pulled back up by Tangle's tail. Tangle demands to find out the truth about why Belle wished to come to the tower. The robot explains that she was not sure before but she now knows that whatever she was built with, inside it is the same as the other Badniks, meaning she is also a Badnik. However, she does not want to hurt anyone and wants answers, with the only one who can answer them being Eggman. Belle says to Tangle that she understands if she wants to leave or destroy her, with the lemur disagreeing; Sonic and Tails vouched for her, so she was okay with her. Additionally, it did not matter to her who she was or where she came from because today she was trying to do good. With this, Tangle assures Belle that they will find answers.

As Sonic, Amy, and Tails continue to walk around the seemingly abandoned town, Amy comments on the "tackiness" of the houses. Sonic attempts to run around the area, only to find out that it was using the same spatial warping as the maze. Upon finding this out, Sonic gets ready to overload it again. Amy instead calls over the two to a house that is open. They walk inside with no one seemingly around. Amy peers into the dining room area and sees a figure sitting at a table. She asks them if they could tell them where they were, only to discover that the figure was actually a test dummy with a fake newspaper. When they find another test dummy at the counter with a frying pan, Sonic dubs their situation from "weird" to "super creepy". The trio suddenly her a "thump" in the house. Tails tracks the source of the noise down with his Miles Electric to the bathroom area. Inside, they find what appears to be a hybrid of a Caterkiller and a Crabmeat in a bathtub. It lunges at them, prompting Amy to smash it with her hammer. They turn around to see several more Quasi-Badniks (consisting of a Crabmeat and Spina hybrid, a Caterkiller and Buzz Bomber hybrid, a Coconuts and Grabber hybrid, and a Chopper and Moto Bug hybrid) in the house, which Sonic manages to make quick work of. Sonic shuts the door and tells the others to block the windows to prevent more from coming in. Even though they do this, Tails notes that there were too many Badniks outside for them to fight head-on.

As they were now stuck inside the house, Amy requests that they make a plan. Tails brings out his Miles Electric, saying that he should be able to track the Badniks' wireless comm signals back to their source and it may get them to an exit. However, he needs time to get the sensors calibrated. Amy reminds the group how they still did not know why this was happening, with Sonic saying he still believes that it is a trap. Tails replies that it feels arbitrary and impersonal, with Amy adding that Eggman likes to rub it in their faces when he thinks he has got them. Before anything else can be said, the trio hear Eggman laughing throughout the house. Hearing this, Sonic grins and finds the source of Eggman's voice to be from several kitchen appliances. He states that he was far from Sonic's reach and he did not mean to trap the trio as the whole area was a test. However, it was not a test for Sonic, but one for the next generation of "mechanical monstrosities" let loose on his unsuspecting planet. With this, Eggman instead thanks the hedgehog as he now got to test his new inventions on some "real dummies".