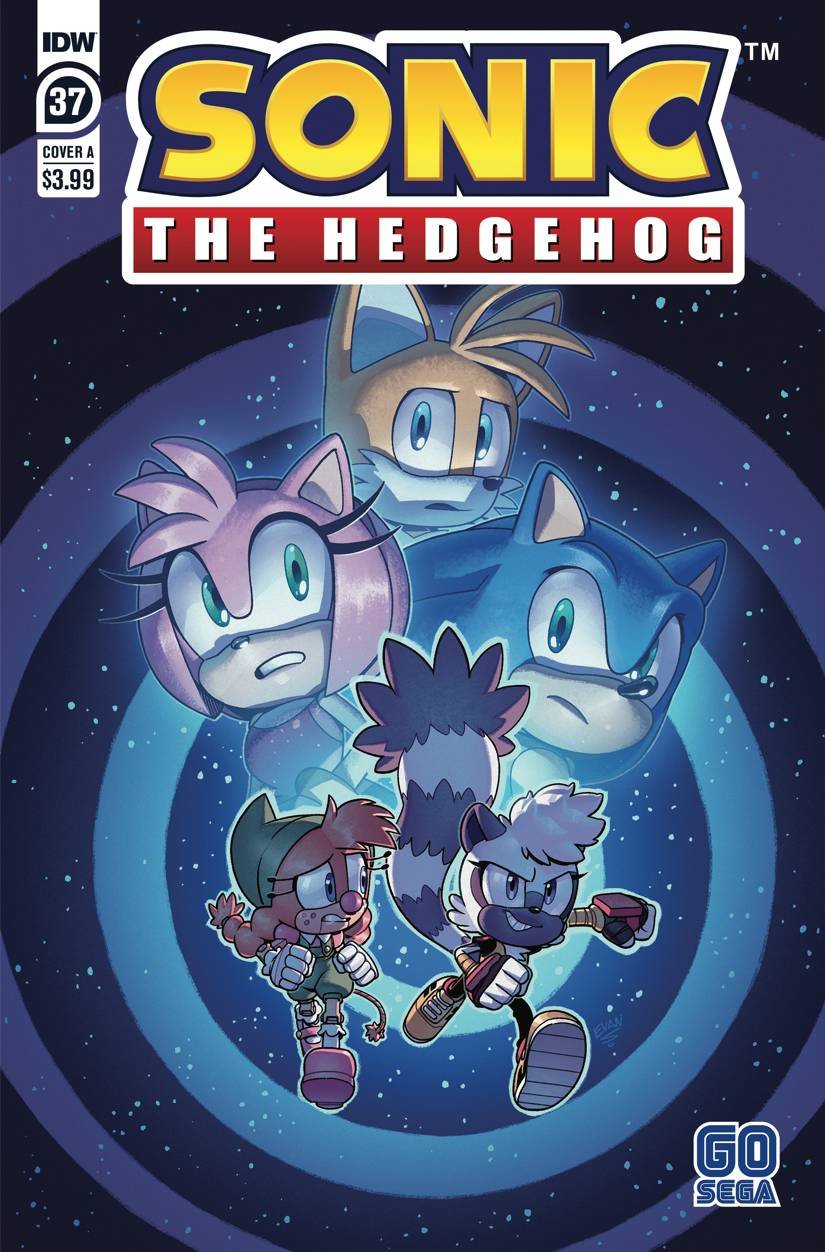 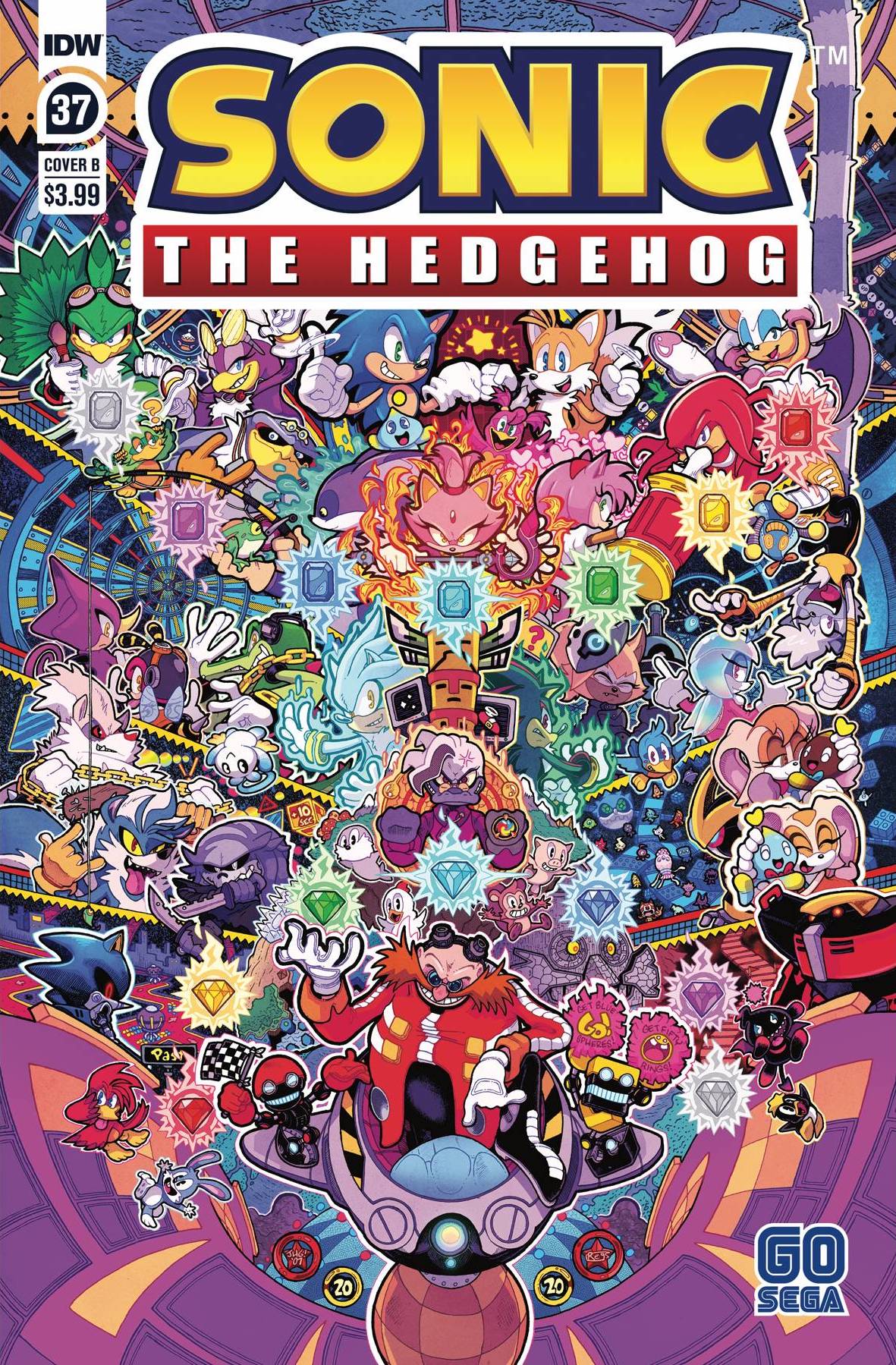 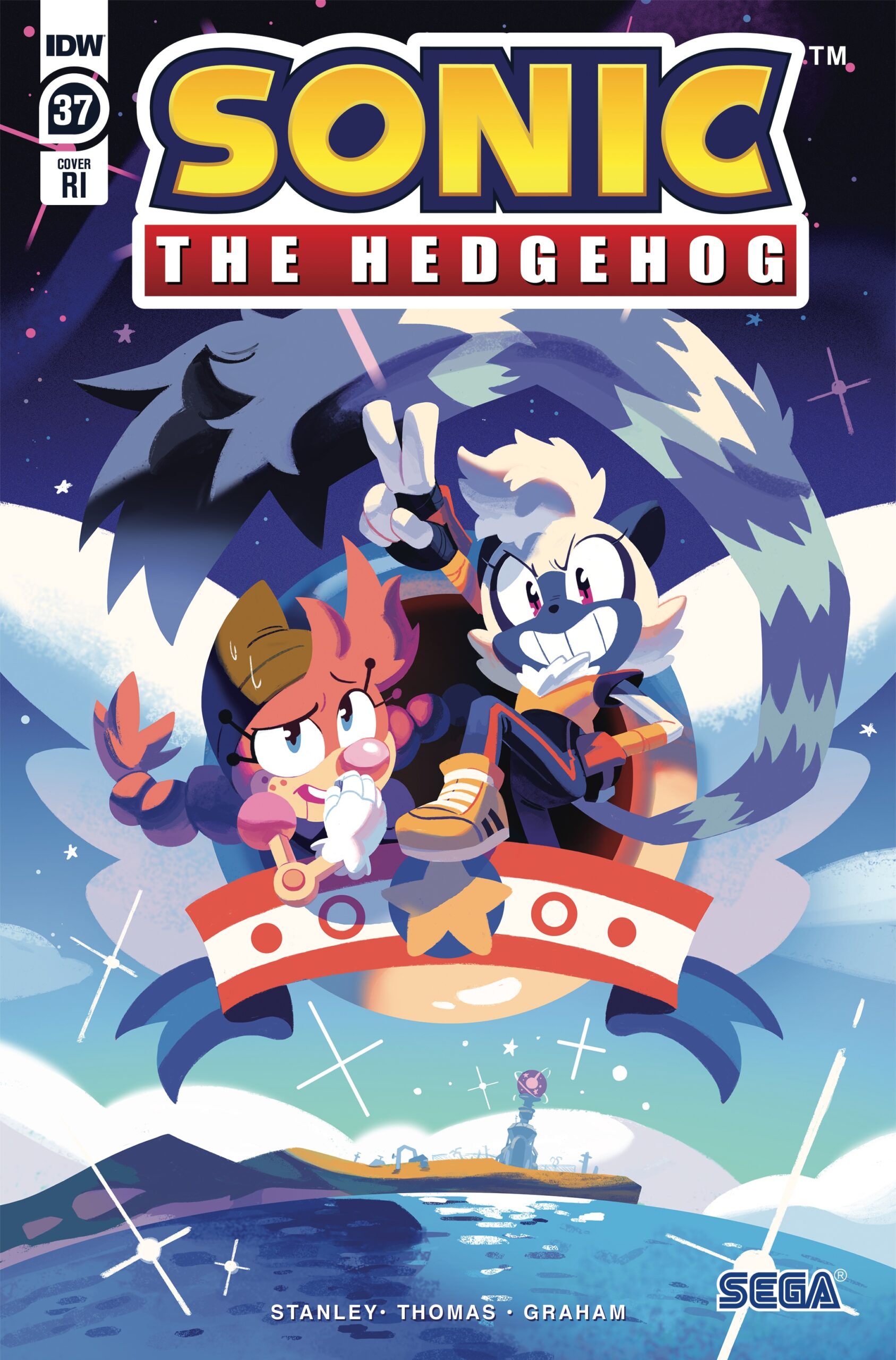 Sonic, Tails and Belle walk through a town, with the latter asking if the Restoration would really take her in. Sonic declares that they will as they are super chill and everyone there is a volunteer who wishes to help others who have had it rough with following the events of the Metal Virus pandemic. Tails mentions that the Restoration have also been working to find anyone who is still missing, like Belle's creator. Belle looks around at the ruined town and asks if they are in the right place. Sonic confirms that they are, with him and Tails leading the robot to a tool shed. Inside, Tails tilts a garden shovel, activating an elevator that lowers the trio down. Tails says that Amy and the Restoration decided to preserve the town's ruins as a memorial to what people already lost. Instead, they built inside what was left over. When the elevator opens, Belle is introduced to the new Restoration HQ.

After a moment, Sonic is greeted by an eager Amy, accompanied by Jewel. He asks if she was done with being director for the Restoration, which she confirms; she was only there to wrap up a few things and make sure that Jewel was okay. Tails says that they are here to give Belle a place to stay. Jewel accepts, happy to have another volunteer and friend of Sonic's. She asks what kind of skills Belle has, to which she responds wood-working. Though she knows that they did not do a lot of that, Jewel figures that she could work in the machine shop. She asks a volunteer to guide Belle over to the machine shop. Following this, Tails encourages Belle saying that she will do great. Belle nervously accepts this. Amy and Jewel give Sonic and Tails a tour of the new HQ, explaining how they believed that they would never get through it. Jewel introduces the boys to the central hub, with Amy mentioning how she would dislike it if she had to do more paperwork for the Restoration. They are soon met by a volunteer who has important information for Jewel.

Meanwhile, Belle receives some unkind comments on her appearance as she passes other volunteers. Once she is brought to the machine shop, she meets the main volunteer in charge there, who asks her to grab a wrench and give him a hand with a donpa sedan. Belle soon moves boxes while the volunteer works on the car, only for him to see that her tail caught on fire. Shortly after, Belle gives him coffee that he does not take a liking to. Shortly afterward, while carrying a crate, she tells herself to pull herself together as she was built for work, so she had to stop worrying about what people thought of her. Her tail gets caught under a forklift, causing her to let go of the crate. When she pulls her tail back, she accidentally kicks the crate upward. The crate cuts the rope holding a boat upward, causing others to run away. While Belle thinks of how she can help, Tangle jumps in and uses her tail to hold back the boat, though she mentions for help to maintain it as it was very heavy.

As Belle believes she is in the clear, the machine shop volunteer berates her, calling her a liability to herself and others, and he could not have that in his shop. He tells her to leave, and as Belle tries to apologize, Tangle steps in saying that she will take it from here. The volunteer allows both of them to leave, considering Tangle was not allowed there either due to their ball bearing incident. Tangle claims he had no appreciation for physical comedy. While Belle claims that this is a disaster, Tangle disagrees as she was new and first days are always rough. She also compliments Belle on her kick, which she explains happens whenever her tail is pulled. Tangle is excited over knowing that she also has weird tail powers and introduces herself to the robot. The lemur wishes to go on and pull off sick stunts with Belle, hoping for something exciting to happen. The pair overhear two volunteers talk about freak storms that have been occurring all along the coast, deeming it unnatural and wondering if Dr. Eggman was behind it. Tangle grins while Belle nervously anticipates what may happen next.

Tangle carries Belle and runs to the central hub to meet Sonic, Tails, Amy and Jewel already beginning their analysis. Jewel brings up the last picture that their scouting drone took before the storm surge took it out. The picture is of a tower with a large galaxy-like sphere of energy at the top surrounded by two rings. Tails points out the energy coming from the top, suggesting that something that powerful would affect cloud formation in the area, causing storms. Jewel states that it was beyond what the Restoration could handle, but they could not leave the villages in danger. Sonic confidently states that if Eggman was up to something, he and Tails would handle it. Amy chimes in saying that she would join so as to not miss out on another adventure with him. Tangle also wishes to join them, only for Jewel to stop her and tell her that she had inventory duty this week. Sonic tries to cheer her up by saying the next time Eggman causes trouble, she will be called. Belle thinks to herself of how "he" may be at the tower. However, if she says she has to go, everyone else will know why. Tangle goes off to do work but is stopped by Belle whispering to her of how she has an idea.

Sonic, Tails and Amy later arrive at the tower in the Tornado. Sonic believes Eggman may be building some sort of weather machine and jumps off the plane to clear out some Egg Pawns. Tails and Amy join him in breaking down a door into the building. After they burst in, the trio fall through an unknown gate. Meanwhile, Tangle asks Belle if she was sure about her plan, leading the robot to ask her if she wanted to help Sonic or not. Once Tangle says yes, the pair uncover an Extreme Gear bike. Tangle asks if she could get it going, to which Belle confirms. While she tinkers with the wiring, Tangle says that she joined the Restoration when Jewel took over. However, now she hardly sees her as she was working hard to help others. Reconsidering, Tangle thinks of returning. However, Belle manages to get the bike working, allowing her and Tangle to take off with it, much to the annoyance of the machine shop volunteer. Tangle mentions that she had never driven one of them before and Belle responds that it was too late to worry about it now.

Back at the tower, Sonic, Tails and Amy find themselves in a completely new room. Tails discovers that the door that led them there was now broken beyond repair, making him believe that it was overloaded when they fell through. Amy worries that it set off some sort of alarm, but Sonic give it little mind, glad to just be inside of the building for answers. Moving on, Sonic finds and Egg Pawn and destroys it, making him believe that they were getting close as where there were Badniks was something worth finding. Tails finds chalk and wonders why the Egg Pawn had it. Sonic and Amy pay little attention to it and continue along, which annoys Tails. Ten minutes later, the trio have found nothing. Tails decides to test something out; he draws an arrow with the chalk on a wall and leads the other two around a corner where he draws another arrow. They return back to the original wall to discover that the mark Tails made had disappeared. This makes Tails deduce that the place is changing around them as they moved through it. Amy asks what they should do about it. The fox says he does not have an answer as he did not think that far ahead yet. Sonic decides to conduct his own test to see if the building could keep up with him.

He grabs both Tails and Amy's hands and rushes down the hallways. As he does so, the trio find themselves running through a spectrum of colored hallways. Not only are they in different directions, but the three of them find themselves mirrored. Unsure of where to go next, Amy just tells Sonic to go faster; Sonic asks if she is sure, to which she says no but feels that if they could out-pace the maze, they could break it. Sonic complies and travels even faster. Amy throws her hammer at a wall and Sonic kicks it into it to break the maze. However, the trio suddenly fall into an unknown space.