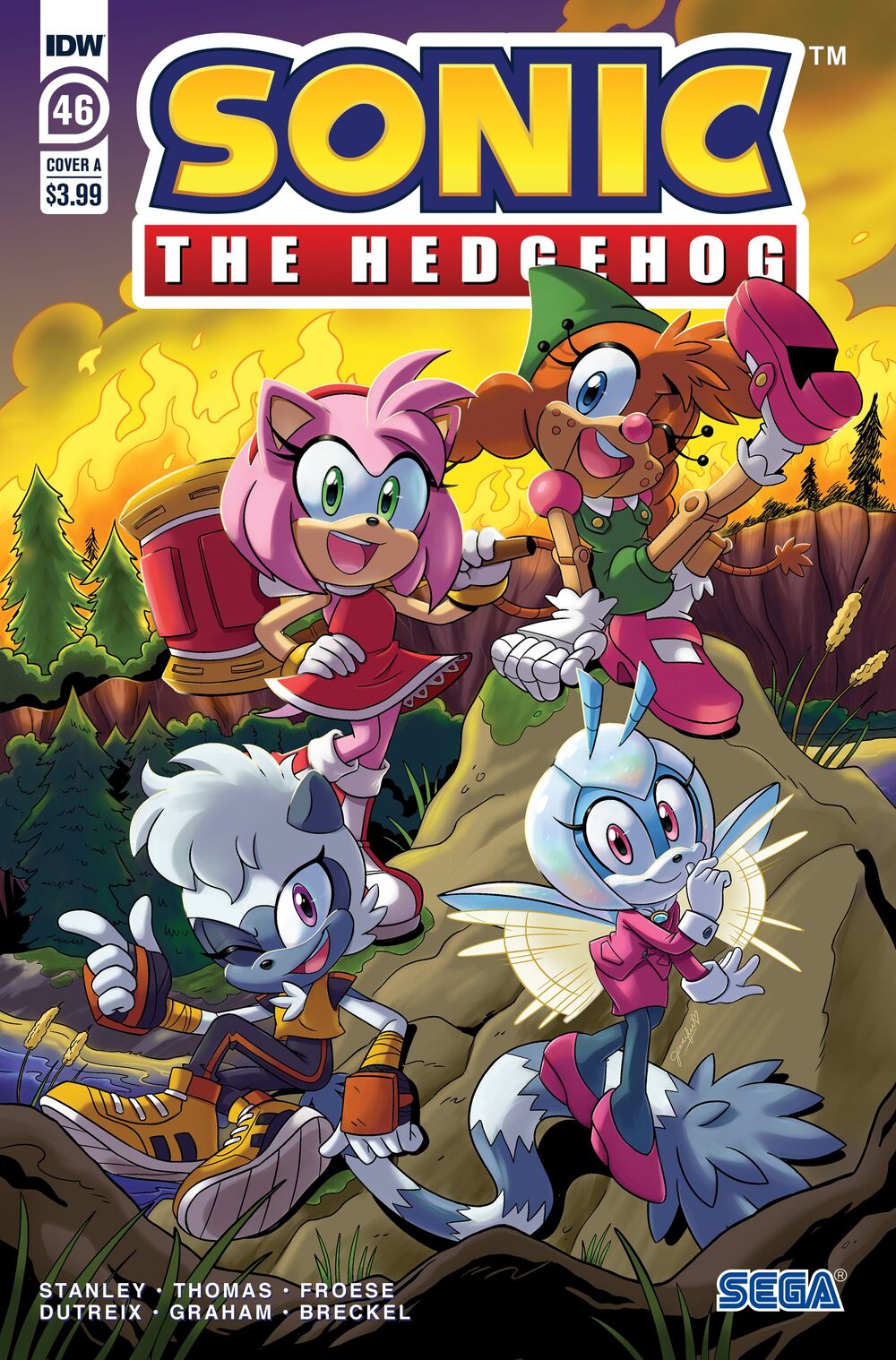 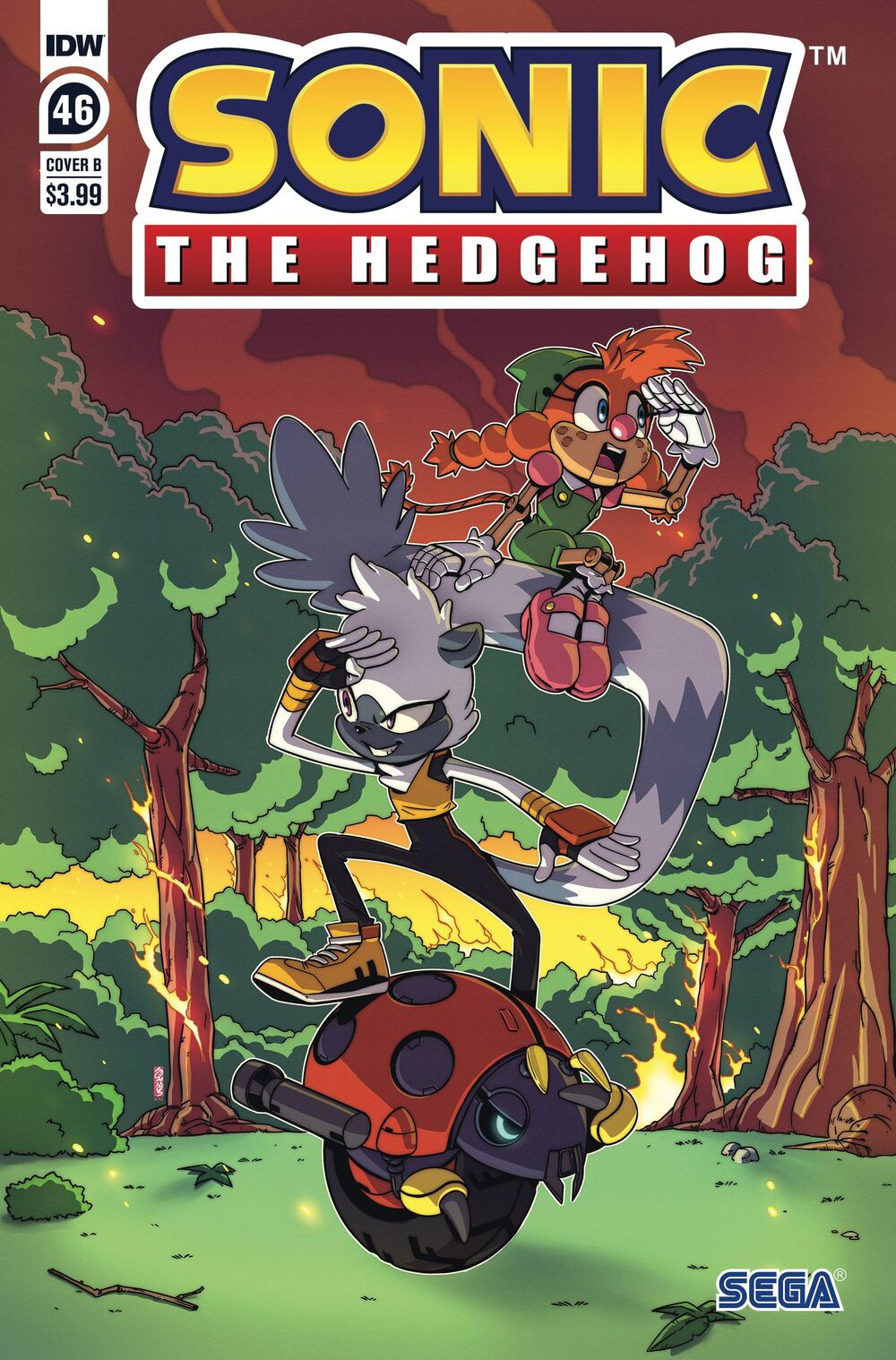 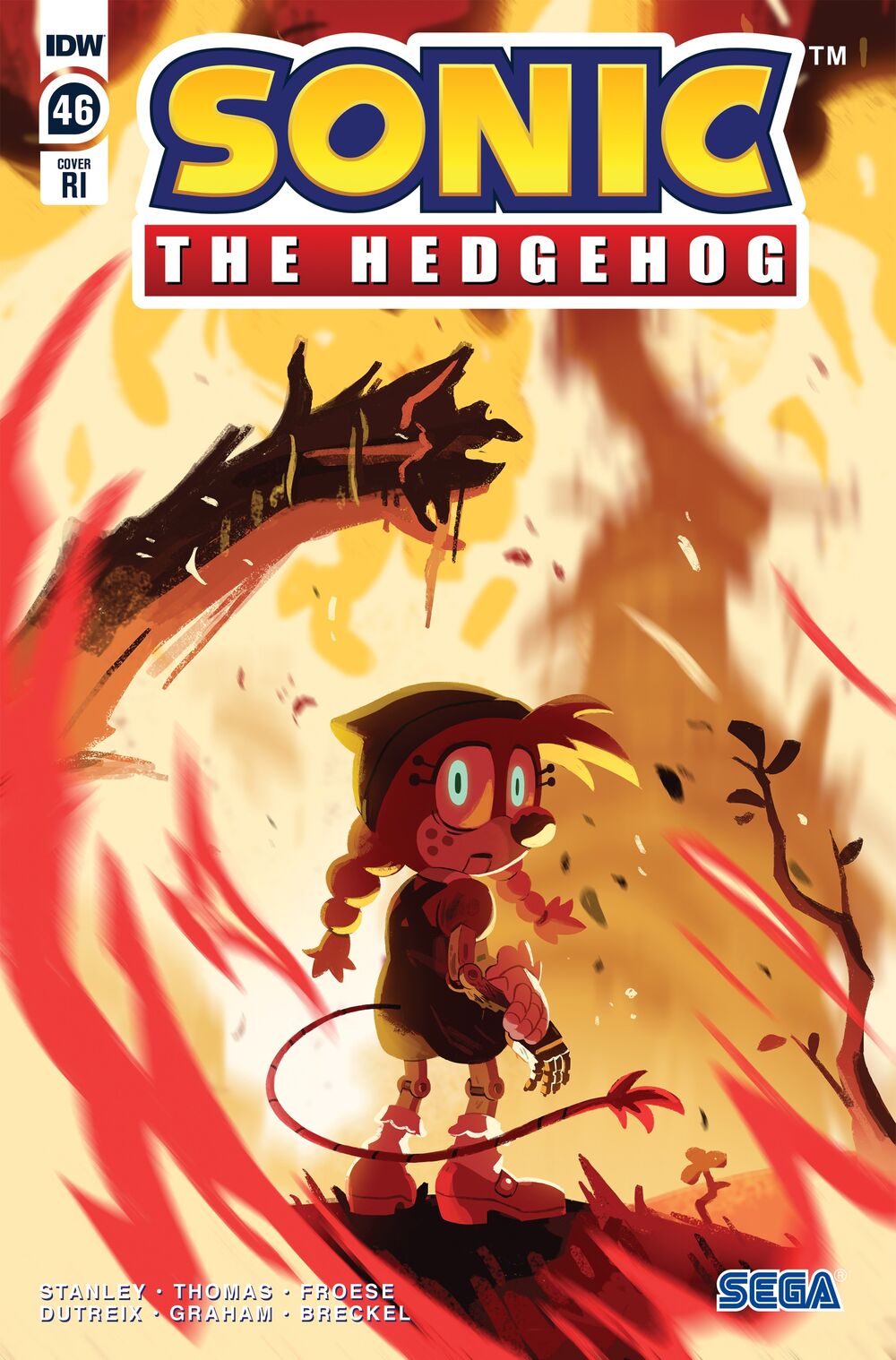 Belle boots back up, looks on to see the forest on fire, and takes short notice of two figures standing at a distance away from her. Taking into account what is happening, she discovers her severely burnt right hand, which now shows her metallic skeleton. Belle's hand begins to catch on fire. A nearby Moto Bug notices this and revs up dirt onto her hand to put the fire out. Belle finds herself shocked at this revelation to be helped by the Badnik as she believed that she was the only Badnik that wanted to help. She looks around and slowly begins to believe that she was the one who started the fire with her lighter. Belle is soon alerted by Tangle calling her name and running to her. She tells Belle to watch out for the Badnik but the helper robot stops her, saying that the Moto Bug had saved her from the fire. Tangle accepts this and asks about Belle's hand, to which she tries to brush off. Belle attempts to tell Tangle that she thinks she started the fire as the lemur wraps her hand with her own tape; Tangle requests for Belle to tell her later instead.

Meanwhile, at the main campground, all of the campers are quickly carrying their stuff and hurrying away from the fire. Amy asks the park ranger what they are working with; he responds saying that there was not much, but the campground was overcrowded, and the road exiting it is not meant for heavy traffic. Due to the wind pushing the fire in their direction, there was no time for such an escape. Amy argues that keeping the gates closed will scare people, but the ranger retorts that keeping it open will cause a stampede. Amy turns to Jewel for ideas, only for her to come up short. She notes that they need to coordinate but everyone is so angry. Amy thinks about assembling everyone while the campers begin to angrily request for the ranger to open the gates to allow them to escape. Once the ranger argues that his son and his Red Wisp were in as much danger as they were, some of the campers begin to believe that they may have started the fire. They continue to argue over whether the ranger should actually be leading or not due to his son's disappearance. Amy makes her way up to a large boulder and breaks it in half with her hammer, which leads into breaking some of the ground as well, alerting everyone to her presence.

Amy shows sympathy for the various families in the park, saying that they have every right to be scared and they only want to protect themselves and their families; however, she tells them that the gate is closed for a good reason, which is that the road is so small that if everyone tries to leave at the same time, everyone would get stuck there. When one camper protests that it would not stop the fire, Amy tries to pass off the conversation to Jewel as she was better with logistics. Once again, the beetle comes up short with ideas, prompting the furious camper to try and take make matters into his own hands; however, Amy stops this by threatening to use her hammer again. When Amy asks what is wrong with her, Jewel says that she does not believe she has the right to tell anyone what to do as she believes she is only good with paperwork and minerals. She relays how she could not help with the Metal Virus outbreak, Dr. Eggman's following attack, or the Deadly Six's attack. Jewel adds that the Restoration could not even keep their own people safe, and she personally is unable to help her best friend. Amy tells Jewel that this whole time Jewel has been doing her best, stating that she has made it this far and with every new challenge she is getting a little stronger. Amy says that even if Jewel does not think so yet, she is certain that the beetle can handle this. Once again bring out "The Master" fortune card, Amy says that sometimes one has to take things on faith. Jewel accepts this encouragement from Amy and thanks her. With this, she approaches the campers with a plan, saying that they can see it through as a group. First, anyone with a high-capacity vehicle is asked to help get children and elders to safety. The next priority is to protect themselves and the forest, with the ranger providing the necessary equipment for park maintenance that they can use. Jewel says that though they do not have the resources to put out the fire, they can create a perimeter to contain its spread.

Elsewhere, Tangle, Belle, and the Moto Bug continue onward through the forest, with the lemur finding it more difficult to breathe within the area. They soon spot the ranger's son, Ashe, and his Red Wisp from across a chasm, holding each other in a scared state. Tangle slowly tries to climb downwards and Belle supports her. This abruptly stops when Tangle violently coughs due to the smoke and the duo both lose their balance, causing them to slide down. The Moto Bug chases down after them and bumps Belle onto its back so it can be used as a vehicle. She grabs onto Tangle and tells her not to let go. As they are quickly reaching the bottom of the cliff, prompting Belle to hand Tangle her tail and ask her to pull on her signal. When they get close enough, Belle yells "Pull!", making Tangle pull on her tail. This forces the puppet to kick off from the ground and lift off into the air over the chasm. However, in their descent, Belle realizes that they will not make it. Tangle takes it upon herself to use her tail to grab onto a rock and propel all of them onto the other side of the chasm. Ashe is confused as to who they are but Belle says that they are here to help and attempts to make introductions. Ashe and the Red Wisp believe that they are here to hurt them. Belle tells him to listen to her for an important message; she squeezes her nose to make a honk sound, pleasing Ashe and his Wisp. Tangle is shocked by this and finds it funny, only for Belle to threaten to dismantle her bike if she relayed this info to anyone else. When Belle asks if Ashe was out here when the fire first started, he states that it was not them that started the fire but instead a lady with big spikes and a boy his size; he describes the lady to have been able to make electricity with her hands, which is what started the fire.

This makes Belle realize she is not behind the fire. Tangle finds the description of the lady to be new to her, with Belle adding that she actually saw two people fitting the description walking through the fire earlier. Ashe is happy to hear that Belle believes him, with the robot confirming this and saying that she wants to help him get back to his dad. As they walk on, Ashe says that following the river downstream will lead them back to the main campground. Tangle catches notice of a tree lighting on fire and warns Belle, Ashe, and his Wisp to watch out. The lemur runs to them in time and gets them out of the way before the tree falls on them. The tree blocks the Moto Bug, prompting it to wonder where everyone else is. It soon notices Tangle's tail clutching onto a cliff, with her still holding onto Belle, who was holding onto Ashe. Though Tangle is glad for a moment, the tree continues to fall further off the cliff, casually destroying more of the cliff's debris. This causes the ground to give way, forcing not only Tangle, Belle, and Ashe to fall, but the Moto Bug as well.