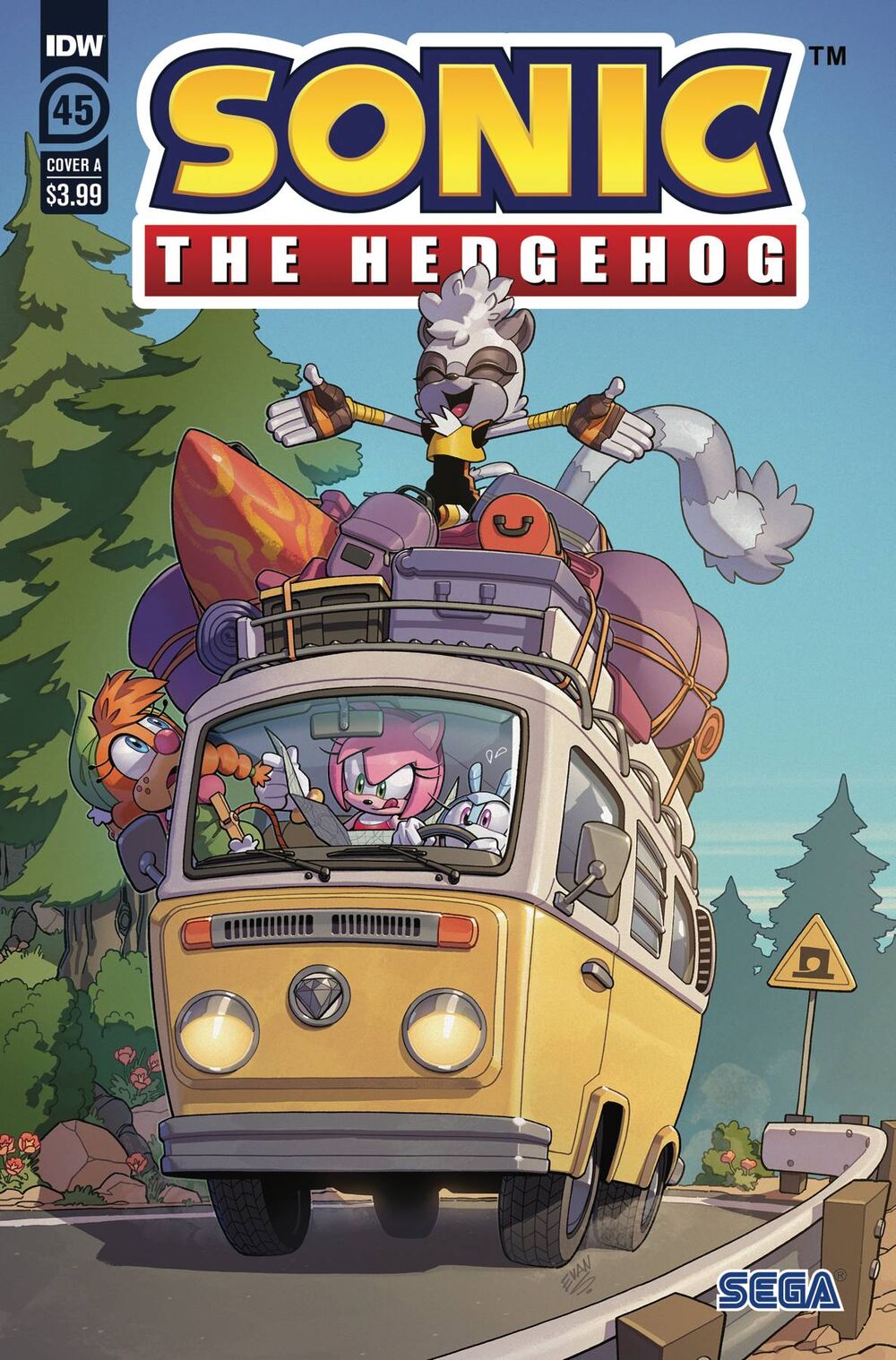 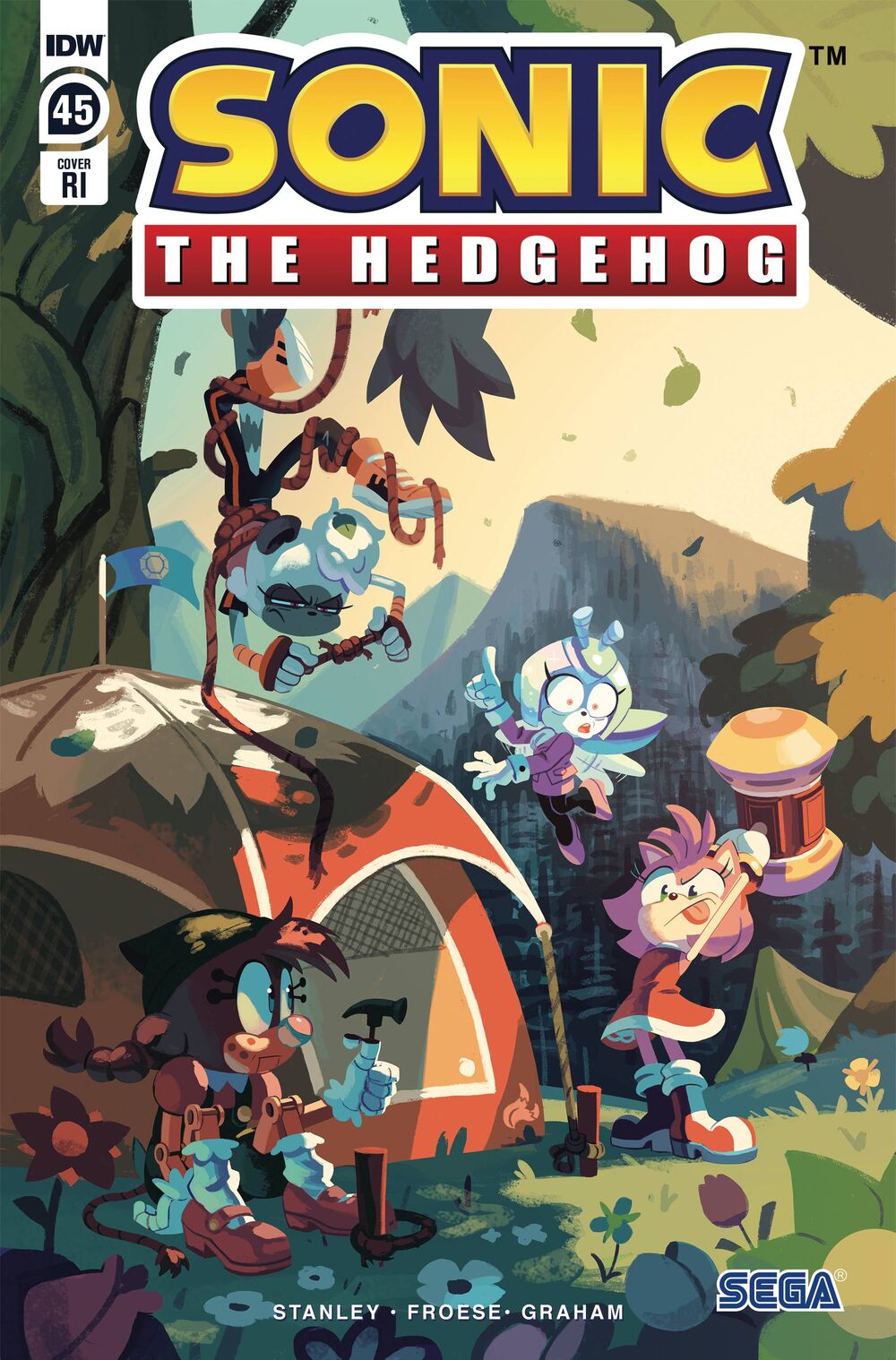 At Tails' lab, Sonic and Tails help load the fox's camping gear into Amy's car. Amy thanks Tails for lending the gear to her, with the fox asking only for her to provide him with detailed reviews of his prototype equipment as he believes that there was no way he could improve without it. Amy is taken aback by hearing that the equipment are all prototypes, with Sonic joking that he believed Amy was a hedgehog and not a guinea pig. Amy shakes this off and believes that it will be fine; this was going to be the first time that she and the other girls hung out with each other without involving some sort of battle or wild adventure, and she is determined to take advantage of this. Sonic is tempted to join them as he believes that the wildflowers in the Zone park could not be beat around this time of year. Tails stops this thought, reminding Sonic that he promised that would play a new video game with him this weekend due to the fact that he needs a second player for versus mode. Due to this, Sonic instead went with Tails as Amy waved them off. Soon, after Amy picks up the others, Tangle expresses her excitement for the camping trip. Noticing that Belle was cramped up at the back with luggage, Amy offered to make more room for her; Belle thanks her but politely declines. As Tangle ponders whether or not she should have brought a knife, Amy tells her that it is set to be more of a "nature hikes and marshmallow roasts" kind of camping trip. The lemur is aware of this but still considers it an adventure, out seeing the world.

A few days earlier, Whisper was leaving Restoration HQ with her Wisps in secret, but was found by Tangle, who went out jogging. When the lemur asked if Whisper wanted to join her, the wolf declined and explained that she had stayed in the area for too long and planned to leave due to Mimic being free; to her, this meant that her presence was a liability and did not want to put anyone else in danger. Tangle mentioned how Whisper had just arrived but Whisper said that her Tangle's place was with the Restoration but hers was not. With this, Whisper and the Wisps left the area. Tangle is snapped back into the present by Jewel and explains that she was thinking about "Restoration stuff". Jewel relates to this as she found it hard to be torn away from such important work. Belle reflects on this with a more pessimistic tone. Amy exclaims that they were here for that reason to rest and recharge; to her, they had earned a girls' night out and was not taking no for an answer. The hedgehog explains that she had done her research, learning that it is the best campground around. When the girls arrive at the campground, they find it to be very packed and busy, which Amy claims is proof that it is an excellent campground. At the reception, Amy tells the ranger at the desk that they have a reservation for site #97. He explains to her that they have new fire regulations in place for the year. The Metal Virus infected the entire region through the winter and metal plants do not absorb water. Due to this, the area missed its hydration last season, making the whole park bone-dry and set to go up. The bear continues to explain that fire was only permitted in marked areas, that coals should be carefully doused before leaving the campsite, and trash was to be taken to designated areas instead of being burnt. He tries to continue his list, only for his map to be burned up by a Red Wisp belonging to his son, Ashe. The kid and Wisp run as his father chases him to scold him for using fire.

The girls eventually get to their campsite and try to set up their gear. Jewel finds trouble reading some instructions as half of it was just geometry equations. Jewel tries to ask Tangle to thread one of the tent poles a certain way, only for the lemur to accidentally hit Jewel with it. Amy finds some frustration in Tails packing several pieces of high tech but forgetting to supply them with matches. Belle reveals that her pinky tool finger is a lighter, which she is nervous about using due to her being made of wood. Amy sees that Belle does not seem to want to use it and the robot apologizes for dampening the mood for the others. Amy discards this as she has a trick up her sleeve. Later that night, Amy asks Tangle and Jewel how pitching the tent went. The lemur gloomily thinks back, only for Jewel to call her attention to her nearly burning her marshmallows. Jewel asks Tangle if she was feeling all right as she has been distracted all day, only for Tangle to snap at her, saying that she can handle it and she has stuff to think about. Before any more tension can develop, Amy prepares to get the night started using her fortune cards. She explains that she is an expert practitioner and the cards led her to someone very important to her. Elsewhere, still playing video games with Tails, Sonic sneezes. Amy continues to say that with the cards, she can uncover the secrets of their destinies. Belle wonders if Amy can really predict the future. Jewel is more skeptical of it, believing it to be more about suggestion; to her, the cards would present someone with an open-ended "prediction," and they will associate it with their own life experiences. Seeing Jewel to be a doubter, Amy decides to demonstrate and pull a card for her. She pulled "The Master", which is a card that signifies strength and leadership—a unifier of chaos. The hedgehog believes this to be very fitting for Jewel, to which the beetle half-heartedly agrees with. Amy moves onto Tangle next, the latter of which wonders if it will be a future she does not like. Amy tells her that she will never know until she tries, and that was part of the fun of it. For Tangle, Amy pulls the "Chao's Fruit"; it is about balance of the opposing sides, giving it several interpretations like a showdown, a moral dilemma, or a partnership. When Amy asks if this was familiar to her, Tangle says no; aside from when the Deadly Six attacked, the Restoration does not find a whole lot of excitement at their HQ. This disheartens Jewel upon hearing this.

When it is finally Belle's turn, she wonders if the cards can work on robots. Amy claims that they can as long as she is open to them. However, when Amy does pull a card for Belle, she is shocked by the results. Eager to know if the result was about her dad, Belle tries to get the card from Amy, only for the hedgehog to nervously resist giving it to her. Belle trips over, forcing the card to fall into the campfire and burn. After an awkward silence among the group, Belle panics and tries to apologize, only for Amy to forgive her and insist that her fortune was is good as she had drawn the "Statue Savior", which was all about mercy and protection. However as Belle is picking up the cards she finds the "Statue Savior" among them; she gloomily looks at it. The hedgehog continues by saying it is perfect for the Restoration, especially with Jewel in charge. With this, Jewel decides to head off to bed. Tangle tries to convince her to stay longer as it is not that late, but Jewel refuses, saying that she is not a night owl. The others eventually go to bed, but Belle does not sleep. She leaves the tent on her own and wanders through the woods. In the woods, she spots a small bush that looks like Sonic's head. It rustles and startles her, causing her to go through her fingers to try and find a flashlight. She is only able to find her lighter on her pinky finger and investigates the bush. Out from the bush, a Motobug leaps out, causing Belle to fall back and hit her head on a rock. On impact, she powers down. Back at the tent, Amy exits and wonders why she can smell a bonfire so late in the night. She looks to the trees to find that a forest fire has been started. She wakes the others up and points out the forest fire to them. Jewel notes that if a forest fire got through to the main campsite, there will be nothing left. The other campers can be seen trying to get away from the site as quickly as possible. Amy states that the area will get worse if people start to panic, and they cannot let that happen. As the group are not able to find Belle, they go to the ranger to see if he has a plan. The bear, however, explains that his son, Ashe, is now missing and he has to find him; according to the ranger, he is always wandering into the woods. Tangle resolves to find Ashe, with Jewel asking if she is sure. Tangle is determined as out there is where she can do the most good. Amy confirms that the ranger can trust Tangle to handle the search and rescue, and asks the ranger to help her and Jewel with getting everyone else to safety. Tangle heads off into the woods and is wished luck by Amy.