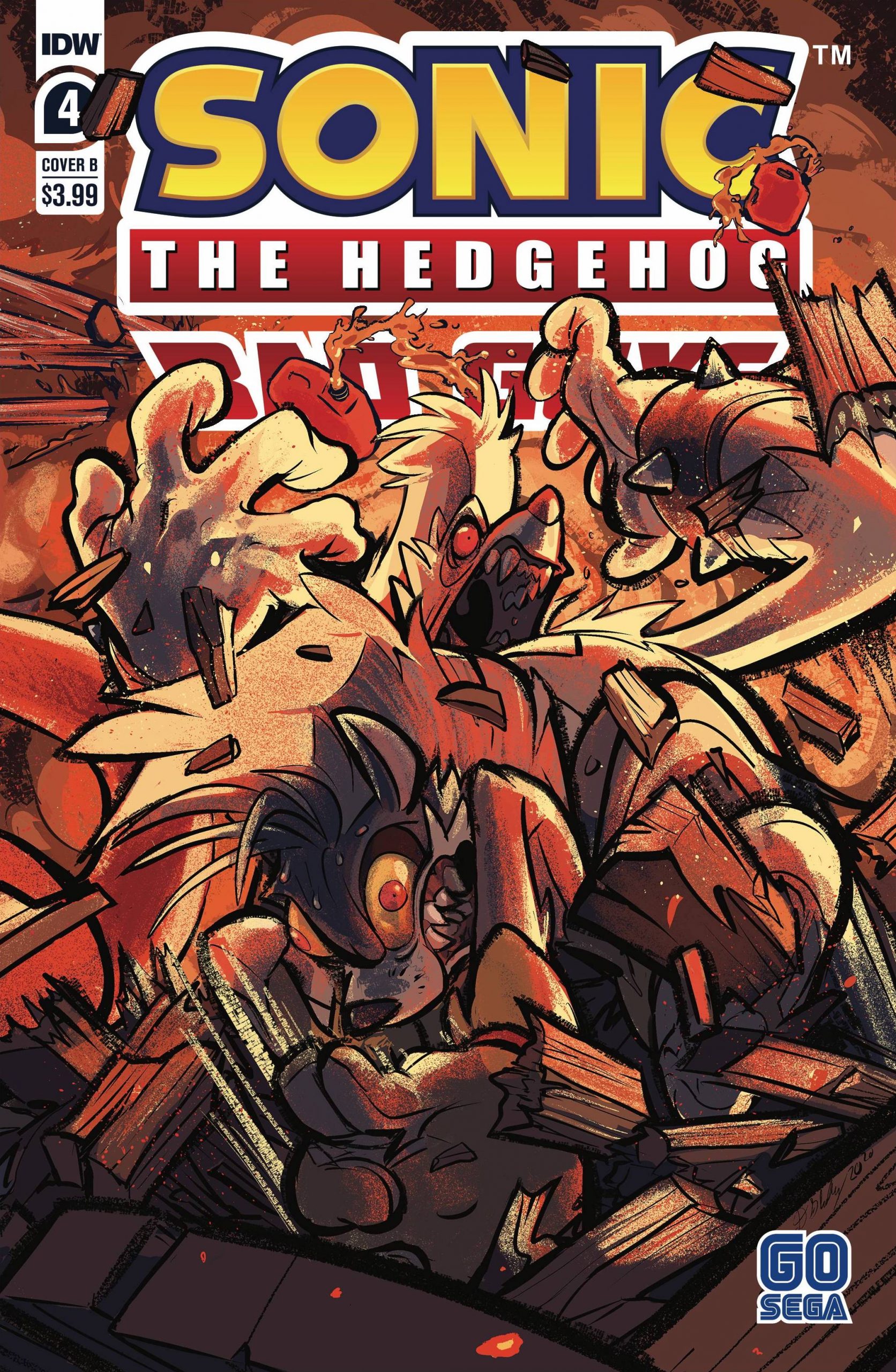 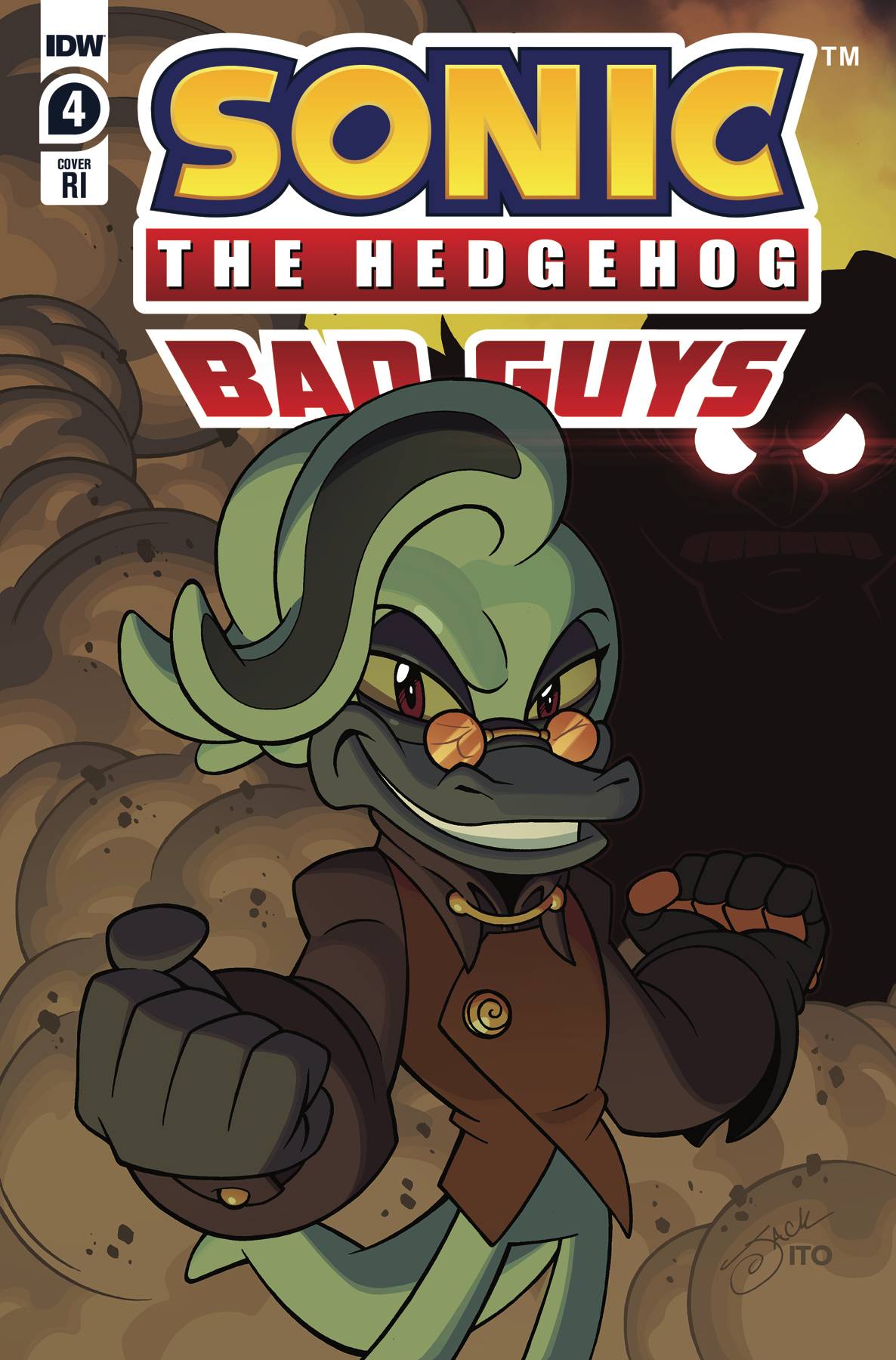 No Honor Among Thieves[]

At Dr. Eggman's Eggnet hub, Mimic, Rough, Tumble, and Zavok all glare at a cornered Dr. Starline, with Zavok asking if he really believed he could betray them so easily; they have everything they want now, except for his hide. Quite nervously, Starline puts the Tricore into his glove and flies backward out of the chair much to everyone's surprise. Tumble attempts to punch Starline, only for the platypus to activate the Tricore's strength aspect and collide his fist with the skunk's. This hurts Tumble. When Rough realizes that Starline has muscle, he tells Tumble to use his Core Gear to defeat him, only for Tumble to ask for a minute to recover. Zavok leaps at Starline, prepared to end him, only for Starline to activate the Tricore's speed aspect and dash away before he can be grabbed. Rough is confused by Starline having speed as well. Mimic clarifies to the skunk that Starline made a better version of the gears he gave them; he can get all three kinds of boosts while they only get one. Zavok orders Mimic to stay behind in case Starline double-backs while he tasks Rough and Tumble with assisting him to find the doctor. Mimic understands, as Starline needed access to the database to get what he wanted. He considers finding somewhere to hide and then ambush him from above. However, he also thinks about how Starline was right over the fact that the others were dangerous and deleting Eggman's files would not mean anything if one of them told the doctor everything anyway. He decides to alert Eggman to their location to get the four wiped out so that there would be no one to rat him out. He says his goodbyes and walks out of the room, prepared to pay a visit to Whisper.

Orbot contacts Eggman, who initially does not want to be distracted. However, the robot brings up the fact that Zavok was currently at one of his Eggnet hubs, shocking the doctor. Once Eggman sees the footage, he orders his squadrons of Balkiries to form up on him with extra thrusters; he was prepared to get rid of the Zeti once and for all. In the hub, Rough speeds through the hallways and yells for Starline, telling him that he could not hide from all of them. With his Tricore's power state, Starline knocks Rough over and kicks him using two doses of his neurotoxin injections from his Multi-Tool Heel Spurs. The platypus flees while Rough tries to alert the others of his location. Starline flies upward as Zavok approaches down a hallway. He states that he was always a failure and was not fit to be Eggman's successor. The Zeti cites his planning as sloppy, the discarding of his comrades needlessly cruel, with all of it compounded by his unearned sense of pride. After thinking about it for a bit, Zavok says that it made him exactly like Eggman. Once Zavok leaves, Starline drops down from the ceiling. While evading Egg Knights, Starline realizes that Zavok was right. All his life he has modeled himself on Eggman and let his ways influence his own. Even if he tries to plan around Eggman's short-comings, his methodology was inherently flawed. Starline thinks to himself on how he let his vendetta against Zavok blind him just as the doctor is distracted by Sonic. He believes that he was too quick to discard his assets, just as Eggman brashly had him cast aside. Though he had become exactly what he critqued Eggman for, Starline knows that there is no time for self-pity; he is now in the "damage control" phase and had to cut his losses and achieve what he can.

As Starline runs down the hallway, Tumble spots him and angrily swings at him for what he did to Rough. Starline dodges his attack and strikes him with the Heel Spurs' neurotoxins as well, leaving both of the skunks incapacitated. Starline enters the control room cautiously, recalling how he heard Zavok tell Mimic to guard the room. Though he is unable to see Mimic, he discovers that the octopus turned his plan against him by alerting Eggman to their location, meaning he would arrive at any minute. The platypus quickly deletes Egg Base Sigma from the registry, converts its defenses to serve him and deletes all of the logs. Following this, he dashes out of the building. Zavok finds the weakened skunks. Learning that Starline poisoned them, Zavok tells the skunk brothers to use their Core Gears to empower themselves and walk it off. However, Rough points out that his was out of power. Fed up, Zavok tells Rough and Tumble to stay out of his way, unimpressed with the inability to defeat one enemy. The skunks angrily point out that they were doing more work than the Zeti. The brothers slowly get back up on their feet and begin to walk, with Rough stating that they should abandon the others as they did not need a leader nor a team. Tumble agrees and the two share a fist bump.

Zavok enters the control room, ordering Mimic to search for Starline on the security feed. He does not find him but does not take much surprise in it. Zavok decides to use the computer for himself to find leads on the Deadly Six. Instead, Eggman pops up on the screen, preparing to fight Zavok. The Zeti wonders who tipped the doctor off but also wonders if it even mattered. Zavok reminds Eggman that the Cacophonic Conch was lost with the Faceship so he had no way of subduing him. Eggman does not care about this as Zavok was trespassing and, according to him, trespassers were to be vaporized. Zavok questions if he would destroy such a crucial installation, with Eggman replying that he can always rebuild and taking the Zeti out while staying out of range from his electromagnetic powers is worth it. Zavok considers this to be wasteful and activates the hubs defenses while applying his powers to the signal. Several Egg Knights wielding Egg Guns and manning turrets appear outside and shoot at Eggman's Egg Hawk and Badnik squadron. As Mimic drives away in Starline's truck, he looks at the battle and hopes that both parties wipe each other out. Rough and Tumble see the ensuing battle from a distance and are glad that they left the scene early. They continue on their way for a brand new start. From another area, Starline watches the battle with a pout. With his patience tested, Eggman orders his Balkiries to dive bomb the facility while he shoots at it with his Egg Hawk. The satellites are destroyed, leaving Zavok powerless against Eggman's attack. As he sees the building collapse around him, Zavok activates his Core Gear. With the hub completely destroyed, Eggman flies away from the site satisfied. However, Zavok emerges from the rubble alive and his Core Gear crumbles to pieces. He sees Eggman fly off in the distance. Zavok attempts to walk away but stumbles due to injuries from the attack. He uses his powers to control an Egg Knight to support him so that he can move. The Zeti plans to heal, survive, and find his way back to his pack.

Later, back at Eggman's HQ, Orbot reports on how there was no sign of Zavok, making the doctor realize that he was still out there. Orbot believes that this meant they now had an answer for the odd raids, but Eggman found it unsatisfactory. He points out that Zavok is not tech-savvy and does not know anything about his infrastructure, asking why he would target the Power Cores factory and Eggnet hub and how did he even know where they were. It was not how the Zeti operated. Though Zavok was involved, Eggman believes that something else was going on; according to him, someone else was making moves against him, though right now, he could not be sure who it is or what they are planning. At Egg Base Sigma, Starline has successfully converted the base into his central command and begins having Badniks paint over Eggman Empire decals. He also has some move the containers for his secret projects. Starline thinks to himself saying that while the execution was far from optimal, the end results were achieved. He now had a facility that could meet the demands of his vision, which has received new clarity. Before, Starline wanted to show Eggman he was worthy and he needed his approval. However, he no longer knows why, as he is as competent as he is. He believes himself to be more self-aware and willing to fix his own mistakes to improve. He sees no point in trying to bolster a person who is just as guilty and maintaining the status quo as Sonic. No longer would Starline be conquering the world to prove himself to Eggman; he would prove it to himself. Claiming his new throne, Starline declares that he would not be proving he was Eggman's equal, but instead prove that he was his superior replacement.