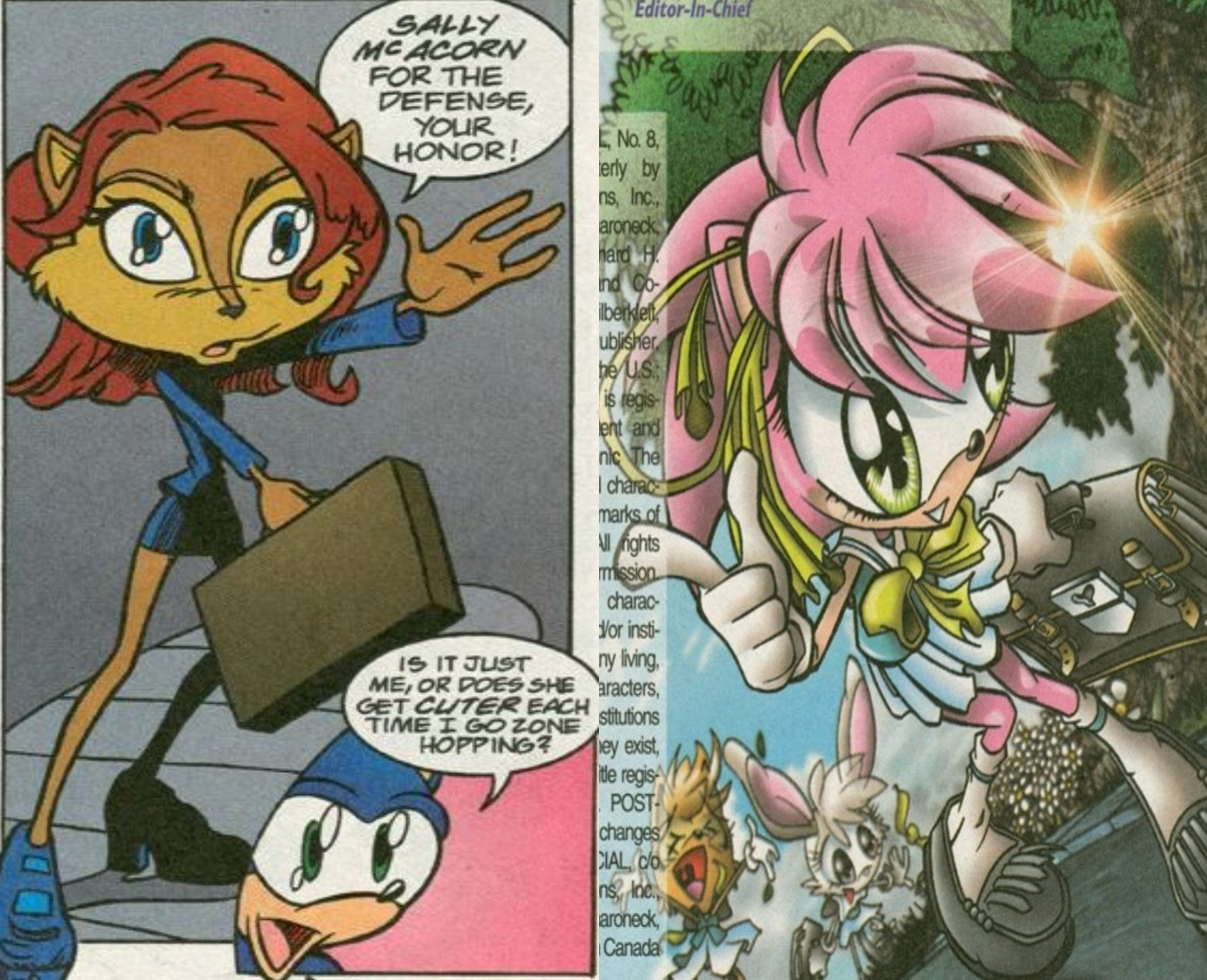 The Archie comic series of the Sonic the Hedgehog franchise was the longest-running video game comic series to exist but it has had its ups and downs. But when the series went down, it went REALLY down in both story and art style. Some of the panels in the comics are so atrocious that Sonic fans have decided to just improve them themselves. In this article, we will view two examples with Sally McAcorn and Chibi Rose.

Sally McAcorn only appeared in issue 14 of the Sonic Super Special as Sonic’s attorney when he was sent to Litigopolis, a Mobius heavily influenced by law and order. After being falsely accused of crimes by Evil Sonic, Sally McAcorn defends Sonic and manages to get him out on bail after 10 hours. After her design was pointed out on Twitter, several Sonic fans took the liberty of redesigning her. So, after summarizing her, let’s take a look at how fans have redesigned her!

You know I had to hop onto this trend lol

Especially since it features Sally and Sonally lol pic.twitter.com/ku32SCnOa7

I did that thing. I forgot to add her word bubble. Look at her orthopedic high heels…. pic.twitter.com/m0vrEATqx7

Did I have to go all out for the Sally McAcorn pic? No. Did I? Sorta.
My take on the Lawyer Sally trend going around #SallyAcorn #SonicTheHedgehog#Archie #archiesonic #sega #ArtistOnTwitter pic.twitter.com/lNRn0u9zTE

I refuse to put any more effort into this shit post https://t.co/FJhQQkBmCH pic.twitter.com/WSXMt20gHs

i joined in with my own redraw lol https://t.co/FuLoD2CMij pic.twitter.com/r03qisyVPG

WHY DOES SALLY LOOK LIKE SHE'S IN ACE ATTORNEY HELP pic.twitter.com/v2iM41fu7K

The first time drawing sally and out of all things, I choose to redraw this

Hey since it’s cool and hip to draw sally mcacorn now heres this redraw I did back in august pic.twitter.com/YcS6CtaoqD

I saw other people redraw this Sally so I thought I'd try. I know the black is supposed to be shading but I couldn't unsee it lol pic.twitter.com/LmVoKt5xPq

had a little free time so did that Sally Acorn redraw i have seen pop up here and there. I kind of like how I drew her hair hehe pic.twitter.com/2rSR64zCtn

Next up is Chibi Rose who only appeared in issue eight of the Sonic Super Special. When the evil sorceress of the Luna Zone, Dr. Ivana Robotnik, trespassed into Sonic’s dimension, Sonic was saved by the pretty soldier Sally Moon, Chibi Rose, and, I am not joking, Tuxedo Knux. As you can probably tell, this is a bizarre parody of the classic anime Sailor Moon. But the particular art that is being redrawn comes from the second page of the comic which doesn’t have Amy in a Sailor Guardian outfit BUT it is in the style of an anime (or at least it’s trying to) and she is wearing the typical Japanese schoolgirl attire that you often see in anime so I’m just going to guess that’s just Chibi Rose when she isn’t a Sailor Guardian. With all that being said, here is what the fans have done with the design!

I was late for the Sally one but I wanted to try this one 💗🌸 Cute Amy is cute#SonicTheHedgehog #sonicfanart https://t.co/EuIGT8h9GQ pic.twitter.com/jmXQfZiebL

Ignore the love letters very obviously covering her foot because I couldn't figure out how to draw it lmao https://t.co/pvswLUMSgh pic.twitter.com/9RWIkl11Hd

I mean, even I could do it, and I'm not that good at drawing, dammit pic.twitter.com/xOEIhheSYO

Please take a look at all these awesome artists! Have a good rest of your day and always stay way past cool!