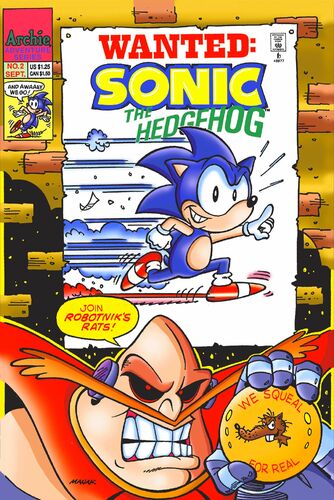 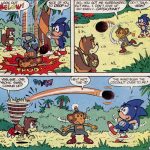 SatAM was obviously a huge inspiration for the Archie comics. But that show wasn’t the only inspiration for the comics. There was another Sonic cartoon that was involved which is called the Adventures of Sonic the Hedgehog. “How was this show involved?” you ask? Let’s take a look at issue two of the Archie comics and observe how this comedic show influenced it. This issue was written by Michael Gallagher and was published in August 1993.

Our story begins with the evil Dr. Robotnik his latest robot which happens to be Coconuts, a robotic monkey. He immediately gets to work by throwing coconut bombs at crabmeat as a demonstration of his abilities. He then heads out to meet Sonic and Tails and throws explosive coconuts at them. As the monkey continues throwing on a tree, Sonic shakes the tree beneath it causing the robot to fall. Sonic and Tails proceed to throw one of its coconuts at it destroying the monkey robot. 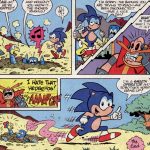 After Robotnik finds out that his robot was destroyed, he sends out Scratch and Grounder, the members of the S.S.S.S.S.S. (Super Special Sonic Search and Smash Squad). As the two badniks search for the hedgehog, Sonic tells Tails to wait for him in Knothole. Interestingly enough, the reader gets to choose as to why Sonic tells Tails to go back to Knothole. The reader can choose A: To warn Sally, B: Because Sonic said so, and C: To give the artist more room to draw. When Sonic begins to fight the two badniks, Grounder captures Sonic with a rope. As Scratch pulls the hedgehog, the two robots argue about who should get the glory of capturing the hedgehog and even start attacking each other. Sonic takes this opportunity to escape the rope and trap them in a pit with his super speed.

After dealing with the S.S.S.S.S.S., Sonic starts collecting rings and is pushed upward to the sky by a spring and enters the Unknown Zone. The Unknown Zone is a trippy dimension full of colors and confusing gravity. But it’s here where we first see Horizont-Al and Verti-Cal, two men who control the gravity of the Unknown Zone. Sonic starts to suspect they work for Robotnik but the two never even heard of the evil doctor. Sonic then falls back into Mobius. 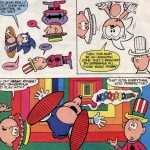 That concludes issue two of the Sonic Archie comics. I hope you enjoyed it.

Summary: Robotnik has ordered the S.S.S.S.S. Squad to capture Sonic. Will the succeed in capturing the blue blur? Or will they be eating Sonic’s dust?