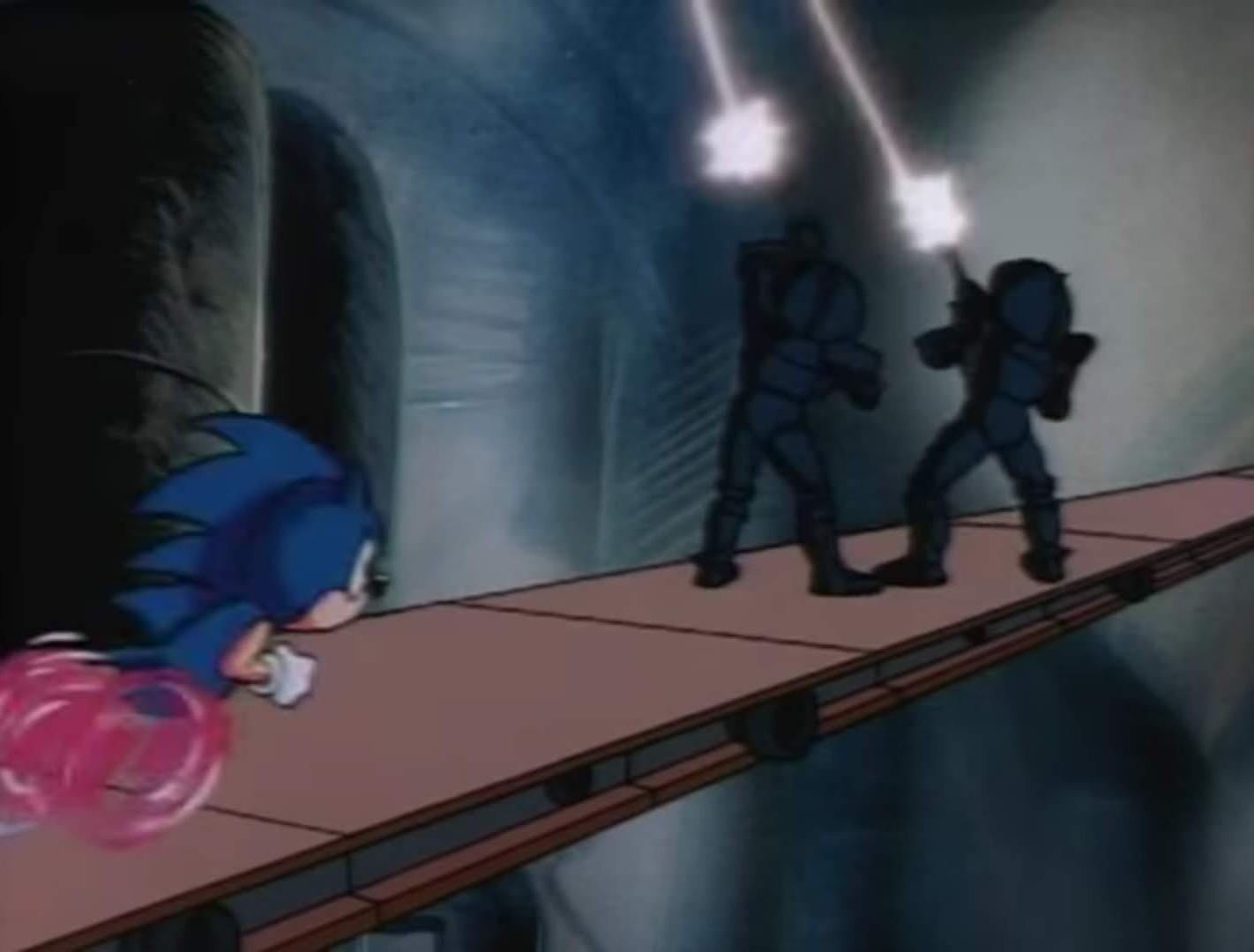 Deep beneath the depths of Robotropolis lies Lower Mobius. In this city live former citizens of Mobotropolis. Let’s view their only appearance in episode 11 of SatAM: Warp Sonic. This episode was written by Matt Uitz. 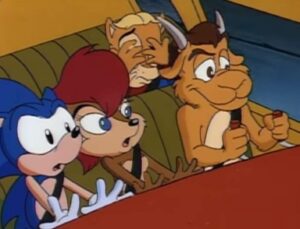 Antoine, Sally, and Sonic enter Robotnik’s traffic control center. The center, however, was guarded with an alarm grid. Nicole places holographic images of the alarm grid so Sonic knows what to jump through. He gets through it with ease and destroys the traffic center. As they are escaping, they end up being surrounded by swatbots. Fortunately, they are saved by Griff, an orange goat.

He takes Sonic and company to Lower Mobius. A city that is powered by a single energy generator. As Griff gives a tour, Sonic immediately heads to the nearest chili dog stand to chow down. But just as he was about to eat, an alarm is triggered and Griff comes to Sonic telling him that Ratbots are penetrating the pipe system. Griff, Sally, and Sonic head to the pipe system on a vehicle but then encounter technical difficulties with the gears. Sonic defeats the two Ratbots with steam but then faces the Mutant which is just a bigger Ratbot. Sonic uses his power ring to push the broken vehicle and the three flee to safety. Griff is quite curious about the power rings and asks a few questions. Sonic talks about how the power rings were created by his Uncle Chuck and then heads off to eat those chili dogs. While eating, a blackout happens in Lower Mobius. Griff, along with another member named Dirk, looks at the energy generator which won’t be able to last another day. Griff mentions to Dirk about the Power Rings but doesn’t really trust the Freedom Fighters. So because of this, Griff does the most logical thing to do….manipulation.

Griff begins by attempting to win the heart of Princess Sally. But this catches the attention of Sonic and Antoine and my least favorite part of the episode begins.

Alright, a quick rant. Sonic should not have a love interest ESPECIALLY his 90’s persona. His whole thing was having this cool edge to him and not having a romantic interest. This is what makes this next part so infuriating for me.

Sonic tries to win Sally over as well with some flowers and….a poem. Now, this poem wasn’t really about Sally but more about himself and his speed but I still dislike this scene. And then AFTERWARDS Antoine shows up giving more flowers and gives a poem as well. I’m also just going to put it out there, the way Antoine says “poem” is just hilarious. It sounds like “poom” when he says it. However, their efforts are in vain and Griff drives the three to Knothole. Sally offers to give him a tour but he declines. Griff then breaks his vehicle to make it appear like it is malfunctioning. Sally offers Griff to stay and fix it the day afterward and he obliges. The princess shows Griff where they get the Power Rings and later that night, Griff sneaks to the fountain and steals the Power Stone which creates the Power Rings. I’m really glad they clarified how these rings are created. The goat leaves Knothole after fixing his vehicle and returns to Lower Mobius.

As Griff places the Power Stone in the generator, Lower Mobius gets attacked by ratbots. The citizens try to fight back but to no avail until Sonic arrives and takes care of them. Sonic then demands Griff to take him to the generator and Griff gives it back to Sonic. He feels sorry for the people of Lower Mobius, so Sonic breaks the stone in half and gives part of it to Griff. The city has its power back and Griff is grateful. This concludes this episode of SatAM. 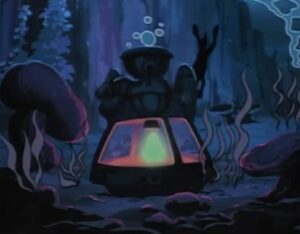