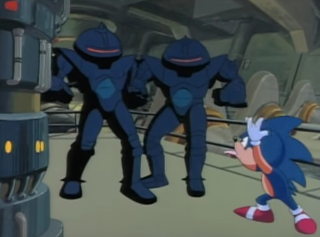 The episode begins with Bunnie Rabbot storing some bombs in Sonic’s backpack. Rabbot, Sally, and Sonic then split up to destroy one of Robotnik’s manufacturing facilities. While Sonic is inside the factory, Rabbot turns off the power. As the lights are off, the hedgehog plants some bombs and makes his escape. Just as Sally was about to tell Nicole, her portable computer, to detonate the bombs, she is caught by some Swatbots.

As Sonic and Rabbot meet at Knothole, they realize that Sally hasn’t returned. The rabbit tells Sonic to wait for a power ring to appear before he finds the princess and he grudgingly complies. 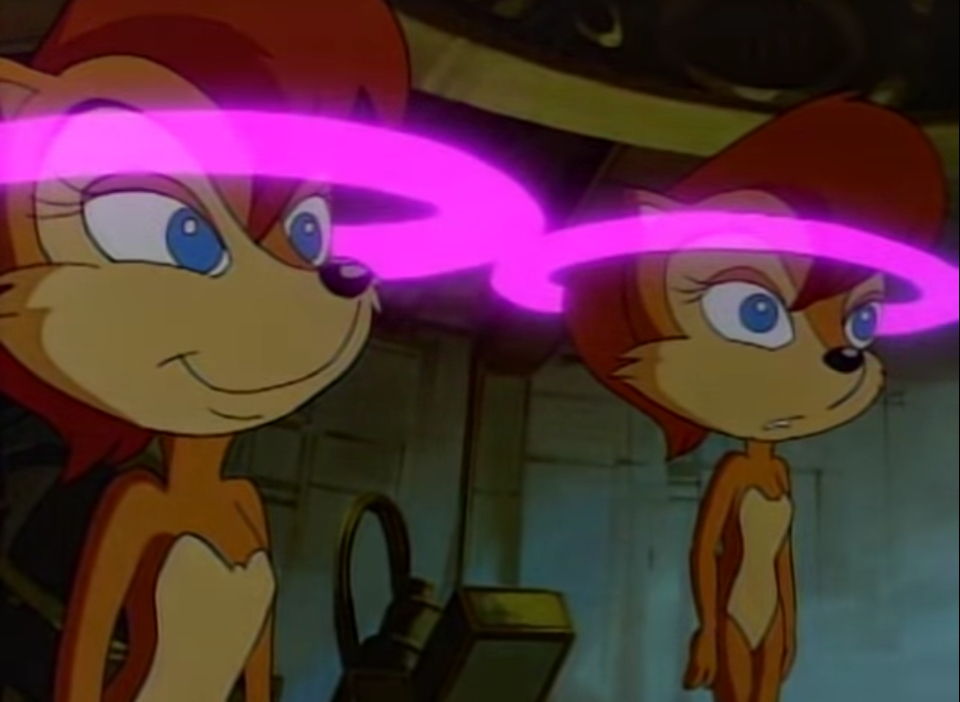 We then see Dr. Robotnik telling Snively to install a special chip that can duplicate a person’s personality into a robot who is right next to the captured Sally Acorn. The doctor asks the princess one more time for the location of Knothole. After she refuses, the robot next to her mimics her voice and then turns into an exact look-alike of Sally. The princess remains unimpressed but Robotnik then proceeds to copy Sally’s personality into the robot.

Meanwhile in Knothole, Sonic is impatiently waiting for a power ring to appear. Right when he was about to leave, a power ring rises from the waters and Tails puts it in Sonic’s backpack. The hedgehog then leaves to rescue Sally.

Robotnik sends some Swatbots in Sonic’s way as he is trying to rescue her. But as Sonic gets closer to Sally’s cell, Robotnik tells Snively to withdraw all Swatbots and let the hedgehog in. After Sonic saves the fake Sally, they head to Knothole. As Robotnik roboticizes the real Sally Acorn, the system overloads causing the video from the fake Sally to be lost and the robotization of the real one postponed. Robotnik can still get audio from the decoy, Sally, however.

Once the two reach Knothole, the Freedom Fighters rejoice. Sally gives Tails a kiss which confuses him. He was expecting the “funny kiss” which is just a kiss but on the nose. This is when Tails starts to get skeptical of this “princess.” When it’s time for Tails’ bedtime story, she chooses the wrong story instead of the story about a princess and an evil witch. As she reads the story, something feels off to Tails. He then tells Sally that she isn’t using her evil witch voice. Sally leaves and tells Tails good night. 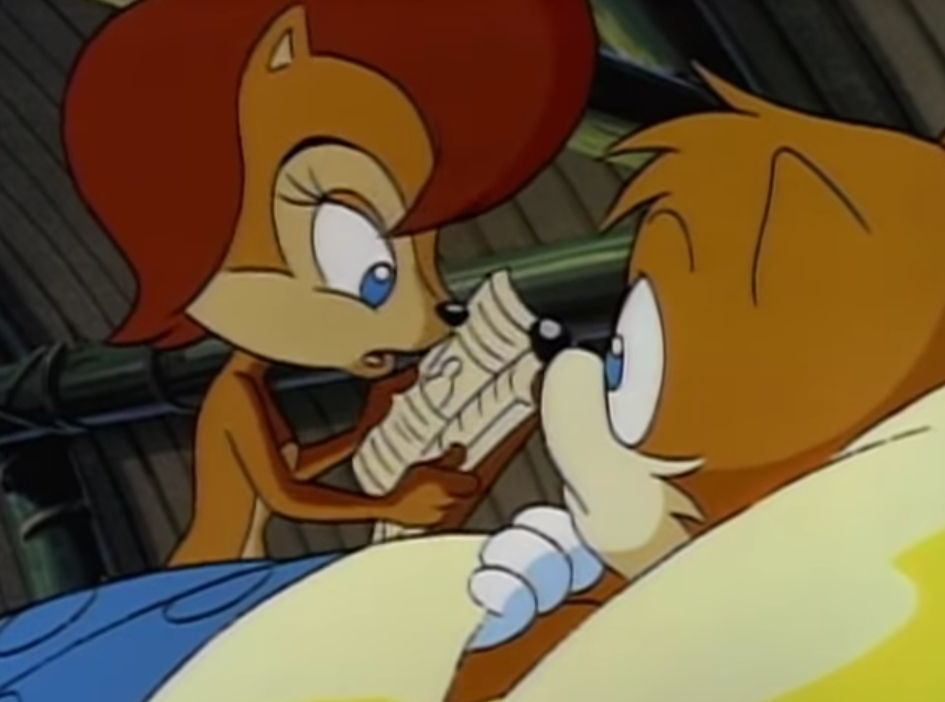 This part is confusing to me. This robot has a copy of Sally’s memory (or at least I’m assuming that because she knows who Tails is and that she reads bedtime stories to him) and yet she can’t remember details like the funny kiss or even which book she was supposed to read. Sally’s personality was also copied to the robot which makes the fact that she doesn’t read the book with her evil witch voice confusing to me. That’s my little rant on that part of the episode.

Sonic realizes that the factory wasn’t detonated so they plan their next attack on the facility. While everyone is asleep, Sally takes a scan around Knothole and Tails notices the strange red beams coming from her eyes and concludes she isn’t the Sally he is familiar with.

That morning, the team finds out that the crops were destroyed and Tails grows ever more suspicious of Sally. He then privately tells Sonic what he has found out but he doesn’t believe him.

As the team enters Robotropolis, they begin their attack. Rotor points out that the Swatbots seem like they know their every move. Sonic then grows suspicious of Sally thanks to what Tails said to him. He does the secret fist bump with Sally but she doesn’t seem to remember how it went. Sonic concludes that she is a fake and he chases after her, er, it. 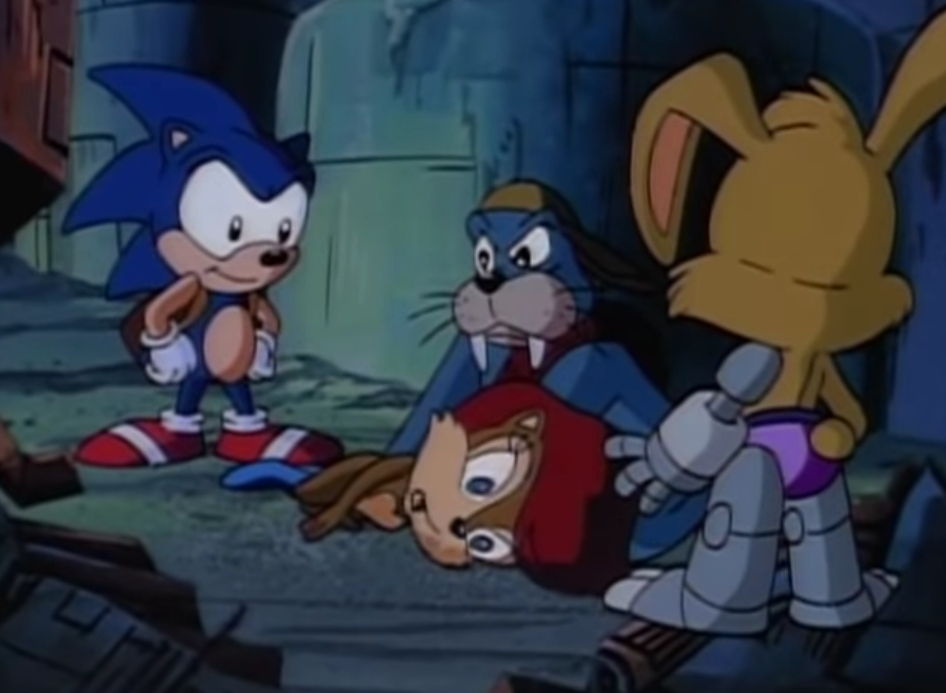 After they capture the robot, they hack into it and find out where Sally is being held captive and mentions that she is about to be roboticized. As Dr. Robotnik was about to roboticize her, another blackout occurs (should’ve paid the electric bill). Just as the robotization resumed, Dr. Robotnik is distracted by the explosion of his factory. While the good doctor is distracted, Sonic switches the real one with the robot. The roboticized….robot then causes havoc in the lab and the Freedom Fighters celebrate.

That is the end of episode three of SatAM. I find it odd that the clone didn’t have certain memories of Sally especially with Tails and the blackouts and malfunctions Robotnik experiences throughout the episode seem a little….convenient for the Freedom Fighters. But what do you guys think? Comment below on your thoughts on the episode.

At a Glance: SatAM Episode 3: Sonic and Sally

Summary: Sally has been captured and replaced by a robotic clone. Will the Freedom Fighters figure it out? Or will it be too late?