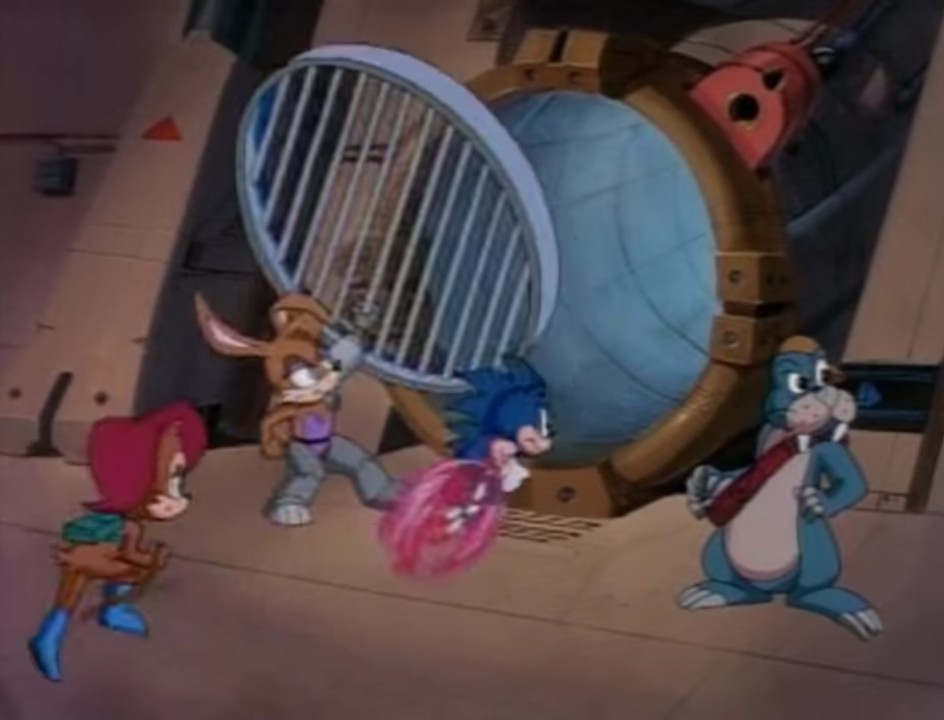 Despite being over halfway through the first season of SatAM, there is one character we haven’t talked much about being Rotor the Walrus. He just seemed to be in the background for most of the episodes we’ve seen so far. In the episode called “Harmonic Sonic,” we finally get to see more of the walrus inventor. The episode aired on Nov. 6, 1993, and was written by David Villaire. 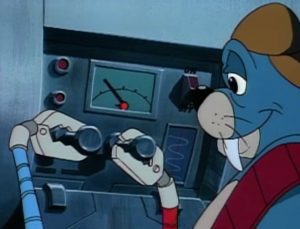 The story begins with Dr. Robotnik loading a bunch of his robots into a rocket ship which is sent up high in the sky. As the ship flies upward, one of its rocket boosters happens to fall apart and land in Knothole. This obviously gets the attention of the Freedom Fighters and they try to figure out what it is. Sally thinks it’s a rocket booster courtesy of Robotnik and Tails notices a ship in the sky which Sally assumes to be a spy ship. Rotor takes a look through a telescope and notices all the sensors it is equipped with and confirms it. Sally decides to try to pick up the signals from the spy ship. In the meantime, Rotor experiments with Sonic’s speed as a power supply for the rocket booster. While Sonic runs on what seems to be a treadmill, the rocket booster is fully energized and ready to go.

Meanwhile, the spy ship detects activity in the great forest and tells Robotnik’s computer the issue. Robotnik sends a stealthbot to fly to the signal which will hopefully lead to Knothole.

Sally finds the signal and unscrambles the code and discovers that the stealthbot is heading to Knothole. Rotor uses Sonic’s speed once more to create an energy field that shoots at electricity at the approaching flying vehicle and destroying it. With that taken care of, Rotor and Sonic head inside the rocket booster and launch to the spy ship. 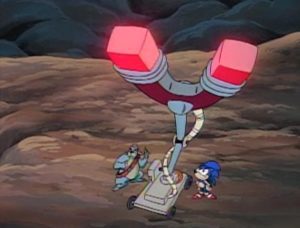 Once they land, they investigate where they should head to but are found by a surveillance bot. Robotnik notices through the robot that Sonic managed to get into the ship and sounds the alarm. As Sonic and Rotor attempt to sneak by, they notice a bar that the robots are heading to. Sonic disguises himself as a robot guitarist but his music skills simply fail to impress the audience. But before he gets kicked out, he manages to trick one of the robots into telling him where the sensor is. Once they finally reach the sensor, Sonic removes the tube connecting to it and throws it inside the core of the ship causing everything to start to breakdown.

As they escape, they find a stealthbot they can get into, and Rotor pilots it. They then crash back in Knothole only to find out that the spy ship will be crashing onto their base. Rotor uses a giant magnet to direct it away from the base and crash in the middle of nowhere. The Freedom Fighters celebrate as Robotnik starts to threaten Snively. This concludes episode nine of SatAM.

Honestly, I still think Rotor didn’t do much in this episode. He never takes the spotlight as Antoine did in the previous episode. I really hope we see him take the spotlight sooner or later. 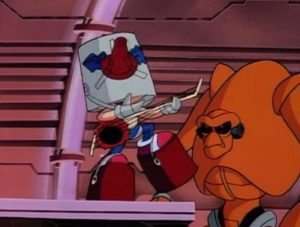 At a Glance: Harmonic Sonic

Summary: Robotnik is about to discover the location of Knothole through the new spy ship. Will Sonic and Rotor succeed in destroying the ship? Or will Robotnik succeed in finding the base of the Freedom Fighters and destroy it?