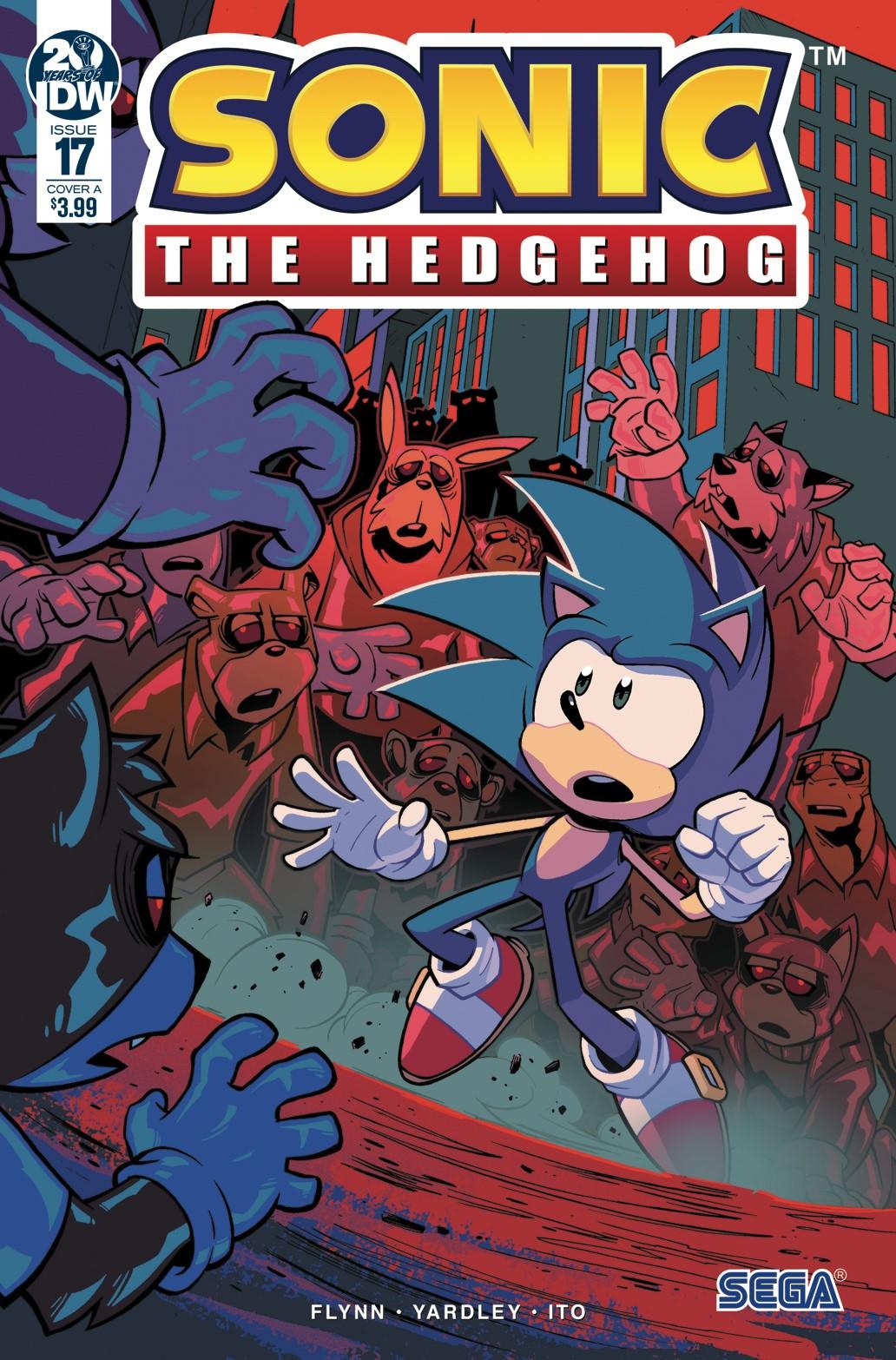 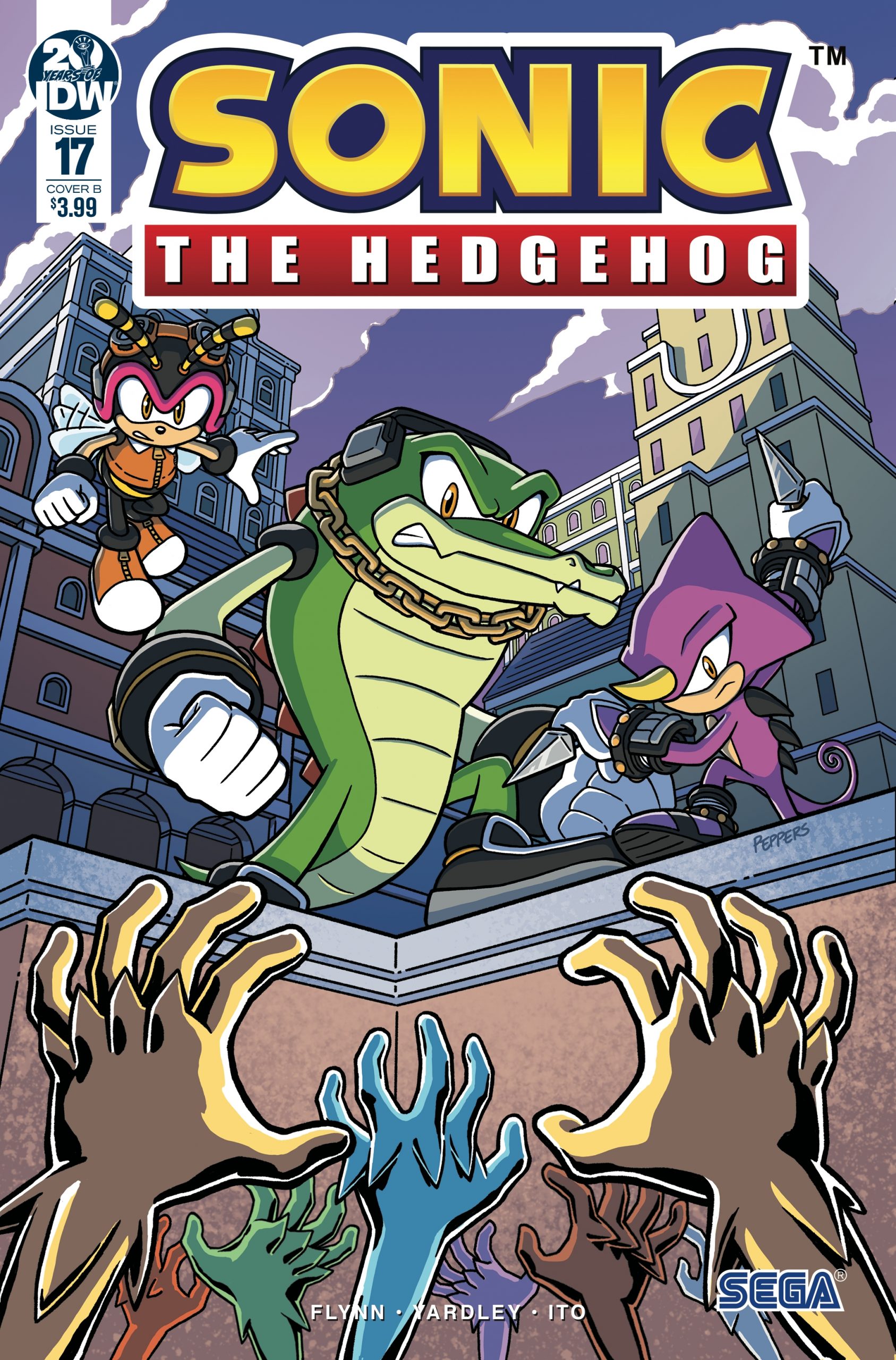 As the infection spreads across a helpless city, the Chaotix Detective Agency stands alone against the horde. Will even the world's fastest hedgehog be quick enough to provide back-up, or will the city fall? The Chaotix take the case as things go from bad to worse!

At the Chaotix Detective Agency in Seaside City, Vector finishes a call with Tails, who has updated him on all the current events. He tells his partners that Dr. Eggman has apparently returned, using a new substance to turn people into creatures called "Zombots". Sonic has been infected, but he can keep it in check as long as he stays on the move. Charmy worries that the Zombots will come for them, which Espio considers a very real possibility. However, Vector believes that they still have a lot of time before the infection reaches their city. He encourages his partners to focus on their next client, who could come through the door at any second.

The words have barely left Vector's mouth before a Zombot kicks open the doors, followed by several more of its kind. Espio tries throwing a kunai at one of the Zombots, but the knife bounces off with no harm. Charmy prepares to attack, but Vector holds him back, reminding the bee that the Zombot infection is spread by contact. The Chaotix escape through the back entrance to hide downtown, only to discover a scene of widespread chaos. The Faceship has poured a batch of Metal Virus across the entire city. Charmy doubts that he can fly his teammates up to Eggman's new vessel, but Vector tells him not to worry; for now, they can deal with the Zombots downtown. After whacking an approaching Zombot with a stop sign, the crocodile uses his headphones to call Amy.

In Restoration HQ, a stressed-out Amy is brought a phone by a fellow Restoration member, hearing Vector's report of the Zombot outbreak in Seaside City. Amy promises to send a Rescue Shuttle. When Vector asks for back-up, she tells him that she will put in a call to anyone who is in the area, hoping that Sonic or anyone else will see Eggman.

As Espio asks for an update, Vector grimly reports that help will take time to arrive; for now, the Chaotix must fend for themselves. Noticing the tree behind him turning metallic, Vector realizes that evacuating through the forest was not necessarily safer. He decides that the citizens should be evacuated by the docks. As they could use the docks as a choke point, it was the most defensible option. With his decision made, Vector tells his teammates to split up and help guide citizens to the docks, reminding them not to touch anyone who is already infected.

Each member of the Chaotix goes to work; Charmy distracts some Zombots to give civilians a chance to flee, Espio traps three Zombots with his kunai and a rope, and Vector helps move a vehicle full of citizens that was stuck (on account of the driver only knowing how to drive an automatic). The crocodile soon finds himself surrounded by several Zombots; luckily, Sonic arrives to knock the infected away with a vortex. The hedgehog tells Vector that he can fight the Zombots since he was already infected. However, every hit spreads the virus faster on his body. Vector reveals his plan to move the citizens down to the docks. Sonic approves of this and tells Vector that he will do his best to cover the evacuation.

Elsewhere in the city, Charmy and Espio guide a group of citizens down the street, with the latter warning everyone to stay alert and report any Zombot sightings. Suddenly, there is a commotion as a woman among the group is revealed to be infected; she insists that she is fine even as the virus spreads over her arm. Charmy asks Espio what to do but receives no clear answer. Vector arrives and traps the protesting woman within a makeshift cage of cars, ignoring her increasingly-desperate pleas but clearly taking no pleasure in his actions. As he moves the rest along, Charmy scolds the crocodile for being "mean", but Vector simply reiterates that they have to prioritize the uninfected for now; if they have time later, they can come back for the rest. Espio tells Charmy that they do not have time to debate and requests that they continue to follow Vector's lead. The bee agrees, but says that he does not have to like it.

As Sonic helps clear the stairwell for a couple on the top of a building, he sees a Rescue Shuttle fly in overhead. While relieved that the evacuation could truly begin, Sonic realizes the shuttle will attract the attention of the Zombots; worse, his own infection has spread dangerously far. As much as he wants to fight the Zombots - such as the group approaching him on the roof - Sonic knows that he is useless to his friends if he allows the virus to consume him. With a final glare at the looming Faceship, the hedgehog dashes out of the city to burn off his infection, pushing himself to go ever faster in hopes of returning to help before it is too late.

At the docks, the Chaotix have created a barricade against the Zombots so that the uninfected civilians can reach the Rescue Shuttle. As Vector and Espio keep Zombots at bay, Charmy counts the escapees and becomes upset after seeing how few people were saved. Deciding that all of the uninfected people are accounted for, he sets off for the city to search for other survivors, despite Vector's orders to return. Espio tries to grab the bee with his kunai, only for a Zombot to bite on it and return his attention to the defense of the docks.

Charmy returns to the woman Vector trapped in the cage of cars, planning to help her; unfortunately, she has been fully turned into a Zombot. Startled by the newly-hostile woman, Charmy reels back over a crowd of Zombots, being grabbed by the foot and pulled into the horde. The terrified bee can only scream for help as he is swarmed by Eggman's metallic minions.

Sonic arrives at the docks to see Espio holding Vector back from going into the city again. Vector tells Sonic that Charmy went back into the city and did not return. Espio reminds Vector that he would also not return if he went after him. The soldier aboard the Rescue Shuttle reports that a city's worth of Zombots was closing in on them and that they have to leave immediately. Sonic tells Vector and Espio that he will look for Charmy. He dashes into the city to look for the young bee as the detectives leave in the shuttle with the uninfected.