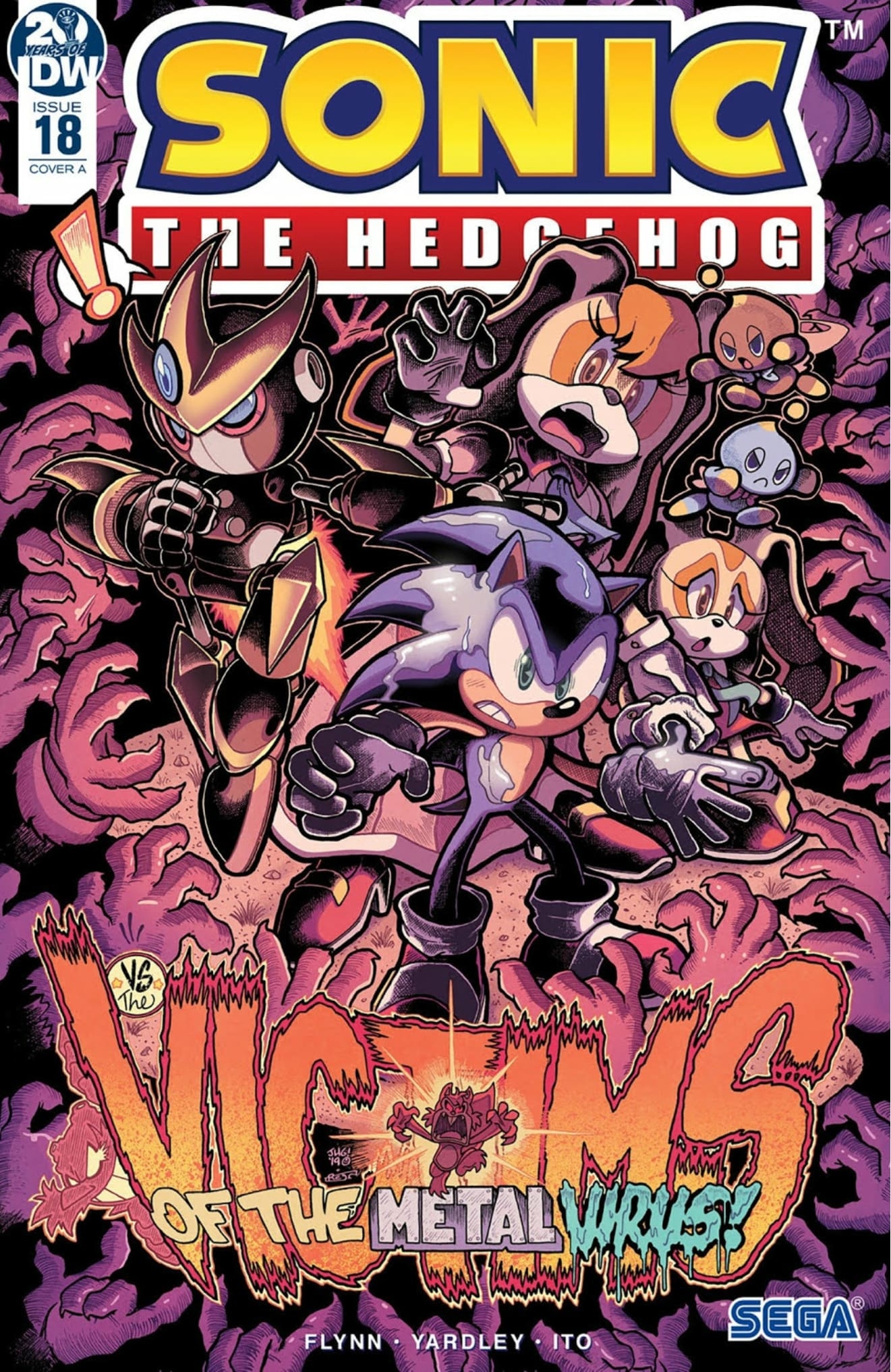 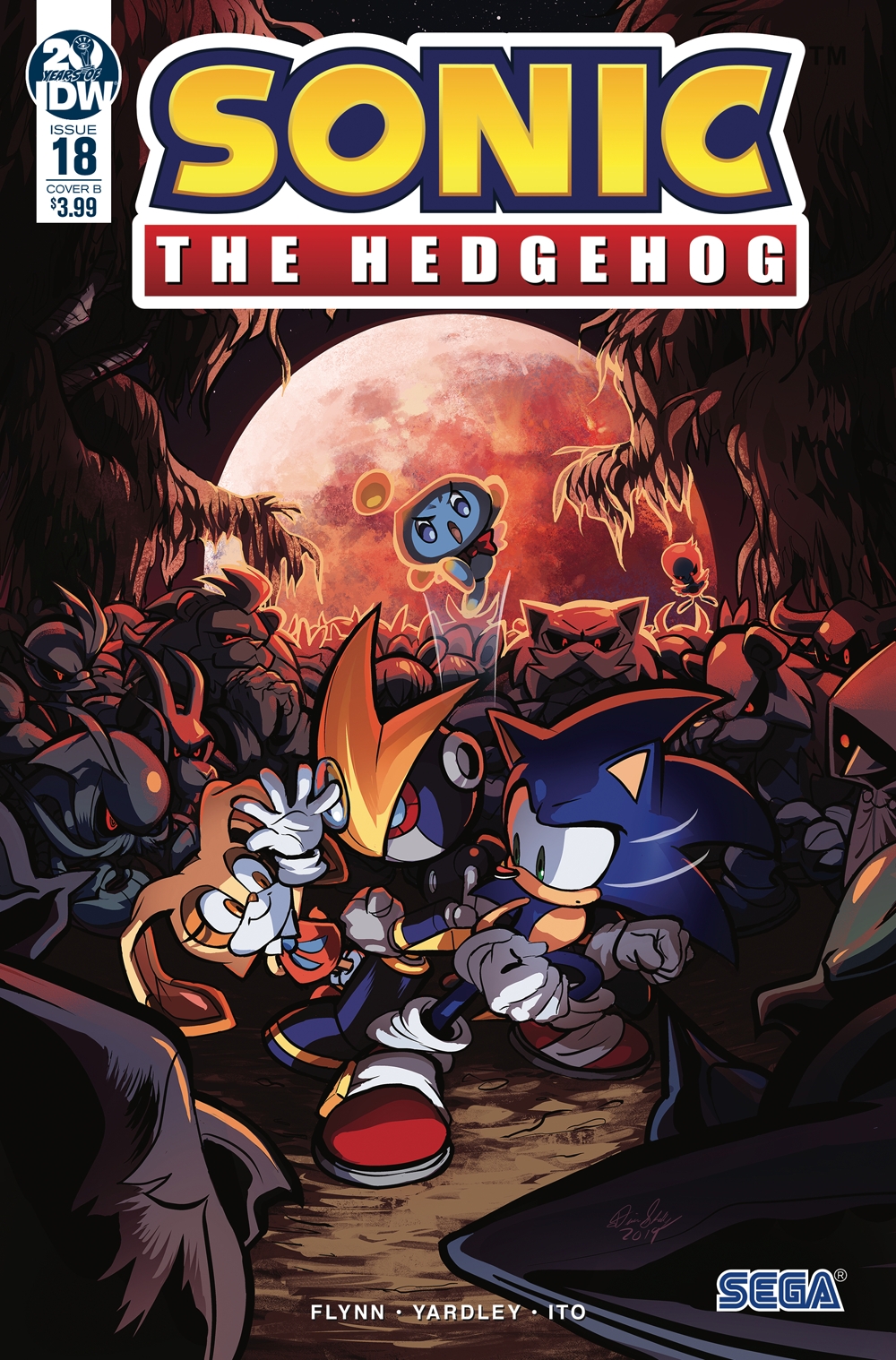 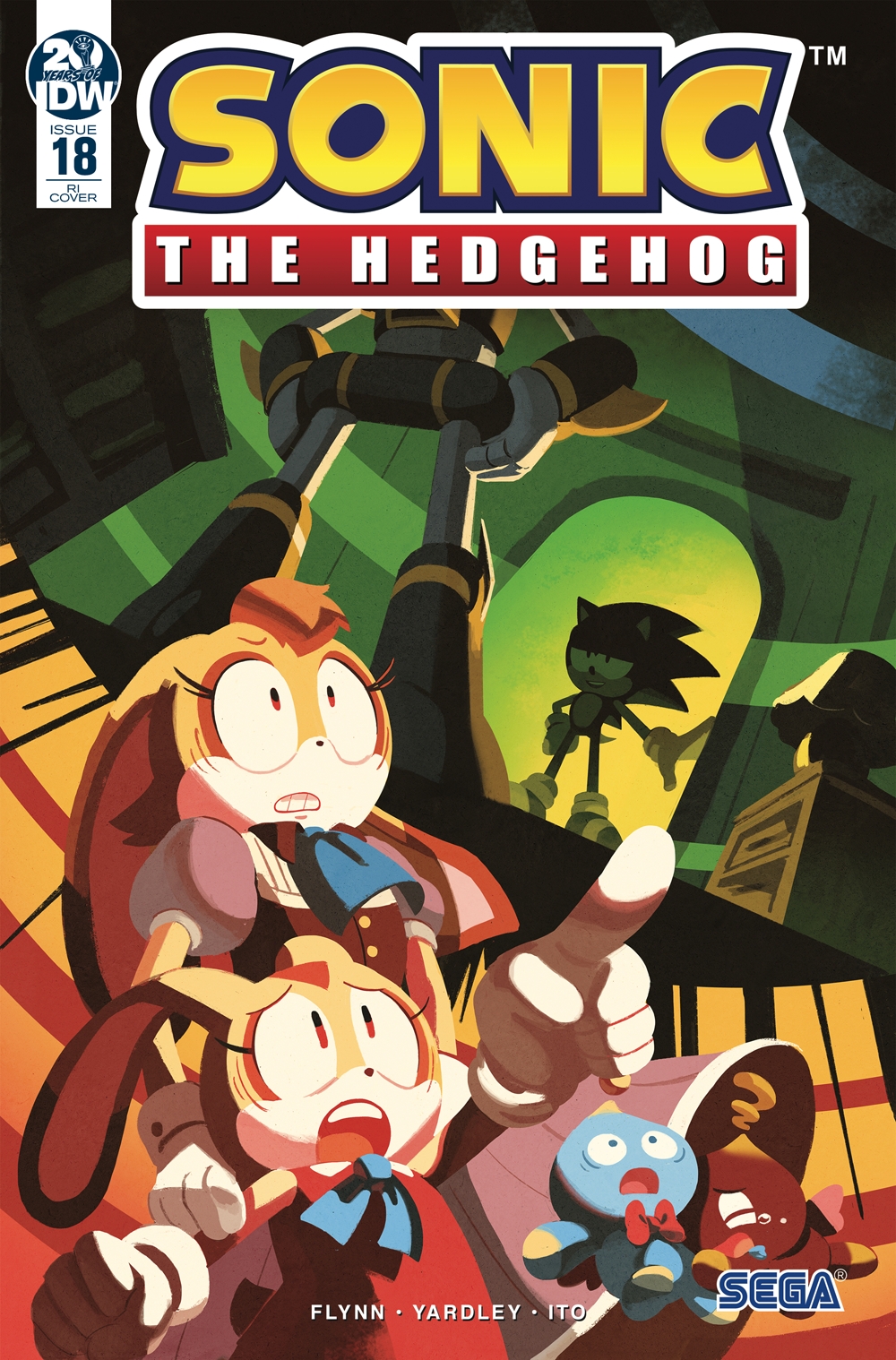 The infection spreads! Sonic's already lost one friend to the spread of the virus and doesn't want to see anyone else corrupted. When Cream the Rabbit's town becomes the latest epicenter, Sonic races to help-but chaos has already started

In Floral Forest Village, Dr. Eggman is once again pouring out a large batch of the Metal Virus with the Faceship. Dr. Starline expresses his confusion as the village is too remote to be of any strategic value to Eggman. Eggman explains to Starline that the village will soon become a veritable minefield of Metal Virus vectors that Sonic will not be able to avoid as some of his friends live there. The mad doctor then takes joy in wanting to break Sonic's will by hitting him where it hurts. Sonic hears all of this from Eggman's intercom and angrily states that he and Eggman need to have a confrontation after he finishes with the village. He continues fighting the Zombots to keep them off of the uninfected villagers. Though Sonic knows he has several questions for Eggman, he knows they cannot be his top priority right now. He recalls not being able to find or save Charmy and worries that history will repeat itself. Sonic quickly shakes off this feeling, knowing that it is exactly what Eggman wants him to do and focuses on finding Cream the Rabbit. Meanwhile, Cream is told by her mother, Vanilla, to close the shutters and step away from the window. Cream states that she wishes to go and help the neighbors as they are in trouble. While Vanilla and Chocola barricade the front door, the former relays to Cream that this is not like one of her previous adventures and that she is still a little girl, not a hero like her friends. Cream replies that she will have Cheese with her for protection as always, just as Vanilla will have Chocola. Vanilla tells Cream that though she is noble and brave, she cannot allow her daughter to go outside, instead asking her to protect their own home. Cream sighs in disappointment but accepts. The young rabbit then turns to Gemerl and asks him to aid village. Gemerl acknowledges his new mission and decides to help protect Cream and her family, as well as assisting the village defenses.

Starline notes that though the population of the village is small, all of the citizens are rapidly succumbing to the virus. Eggman soon after orders the Zombots to pile up on Sonic. However, the Zombots ignore Eggman's orders and continue wreaking havoc on the village, much to the relief of Sonic. Cubot relays this info to to an angry Eggman while Orbot pulls up an analysis sheet that shows that there has been a steady decline in Zombots responding to the doctor's voice commands. When Starline asks why this is, Eggman considers random mutations in his Metal Virus' coding as a result of spreading from exposure. Starline finds disbelief in this as he thought Eggman had accounted for this possibility. However, Eggman only cares that the virus is working and states that he will work out any errors afterward. Starline protests, believing the virus may spin out of control. Eggman snaps back, saying he will find a way to control it. Now in a bad mood, mad scientist goes off to eat. Starline confides his new feelings in Orbot: ever since Eggman began his conquest of the world, Starline has been fascinated by his mannerisms and and devoted himself to robotics and the search of arcane technology because of him. Starline had always assumed Sonic had defeated him over and over due to his unnatural strength but now believes the problem is that Eggman cannot plan for the long term. Orbot replies saying that it is a fifty-fifty battle, stating that Eggman will formulate a new plan, execute it but get stopped by Sonic in the end. Starline looks on with disappointment.

Back on the ground, Sonic fends off more Zombots and orders the uninfected villagers to head north to the glade where they will be rescued by a shuttle. Sonic looks back and sees that the infection is spreading quicker on his body. Though he knows he needs to run it off, he cannot leave the villagers just yet and running in circles will not help him. As he begins to worry for Cream again, Sonic is knocked over by Gemerl. Sonic asks the robot why he attacked him as he thought they were friends. Gemerl does remember their friendship but renders Sonic as a danger to Cream's safety due to his intense infection. Though Sonic claims he can keep it under control, Gemerl finds that his transformation is imminent and an immediate threat. The robot thus continues to attack Sonic. The hedgehog explains that he can run off the Metal Virus. He then asks if Gemerl can use his bonding powers to bond with the machine-like virus but Gemerl finds the infrastructure of the virus incompatible. As it cannot infect Gemerl, he finds its destruction the only other option. Meanwhile, Cream watches the two argue with worry. Gemerl tells Sonic to reduce the threat by running off while Sonic protests as there were still several people who need his help. Gemerl refuses his help, stating that he is a threat and will be eliminated if he does not move on. Sonic calls out Gemerl as he cannot fight him and the Zombots at the same time. Gemerl does not care for Sonic's compliance as keeping Cream safe is his top priority. The robot subsequently arms his missiles. As Sonic notices that his transformation is nearly complete, he angrily runs off.

With his primary threat "neutralized", Gemerl turns his attention to the Zombots and begins firing missiles at them. Cream then runs out ordering Gemerl to stop. She tells him that he was taking his protection much too far. She tells off Gemerl for being mean to Sonic, though Gemerl reminds her that he was infected. Cream corrects him by stating that Sonic is a victim and was only trying to help the village. She also points out the the Zombots are victims as well and he should not attempt to blow them up. Gemerl finds a logic error with this and Cream continues to protest. She tells Gemerl that the villagers did not want to be robots. Cream reminds Gemerl of the time Eggman forced him to fight and destroy until he was stopped and reprogrammed by Tails, allowing him to live peacefully with Cream and her family. The young rabbit then asks if the Zombots deserve a chance to be fixed as well; a chance to be happy. Gemerl backs down and tells Cream he will proceed to protect her non-lethally. Cream happily hugs the robot, thanking him and tells him to apologize to Sonic when he returns. While Gemerl fights off a few Zombots, Cream hears a scream come from inside her house. She calls for help but Gemerl finds himself surrounded. Sonic also finds himself preoccupied preventing a forest fire that is nearly begun by two villagers who wish to burn it down to stop the infection from spreading.

Inside her house, Cream finds Vanilla, Cheese and Chocola being attacked by Zombots. Cheese immediately hits the leading Zombot, ignoring Cream's protests. Cheese flies at the Zombot again, only to be captured in its hand. Chocola flies in to save his brother, only to be deflected easily and captured by the same Zombot. Cream and Vanilla then look in horror as Cheese and Chocola become Zombots. Vanilla attempts to take Cream out of the house, though the latter wishes to not leave her Chao behind. Vanilla is blocked off by a Zombot but it is quickly knocked out of the way by Sonic. Sonic is then met by an infected Cheese and Chocola. He turns to Cream and calms her down, saying that Cheese would not want her to get caught. He asks the young rabbit to be brave and help get her mother to the north glade for safety. Sonic promises that once everyone has been evacuated, they will find a way to fix the Zombot problem.

Cream agrees and flies off with her mother, leaving Sonic to believe Cream will one day grow up to be someone amazing. The Zombots from inside the house waste no time to lunge at Sonic, only for all of them to be knocked back by Gemerl, who apologizes for his earlier actions. Sonic tells Gemerl that Cream and Vanilla are heading towards the north glade and asks the robot to make sure that the shuttle takes off properly. While Gemerl flies off, Sonic grabs glass jars from inside Vanilla's house and traps Cheese and Chocola inside of them, noting that they will be a problem if they are left to flying around on their own. Sonic satisfyingly sees the Rescue Shuttle take off and continues to fight Zombots. He is soon radioed by Rouge who tells him that she has intel that Eggman is heading towards Sunset City next. Shadow and Omega are already there to intercept and Sonic deduces that they may need a hand. Sonic recalls Eggman failing to turn the entire village against him and realizes if he completely infects another city, there would be more that he would not be able to control. The hedgehog finds himself determined not to lose another friend to the virus. Unbeknownst to Sonic, the Zombot Cheese and Chocola begin to break out of their jars.