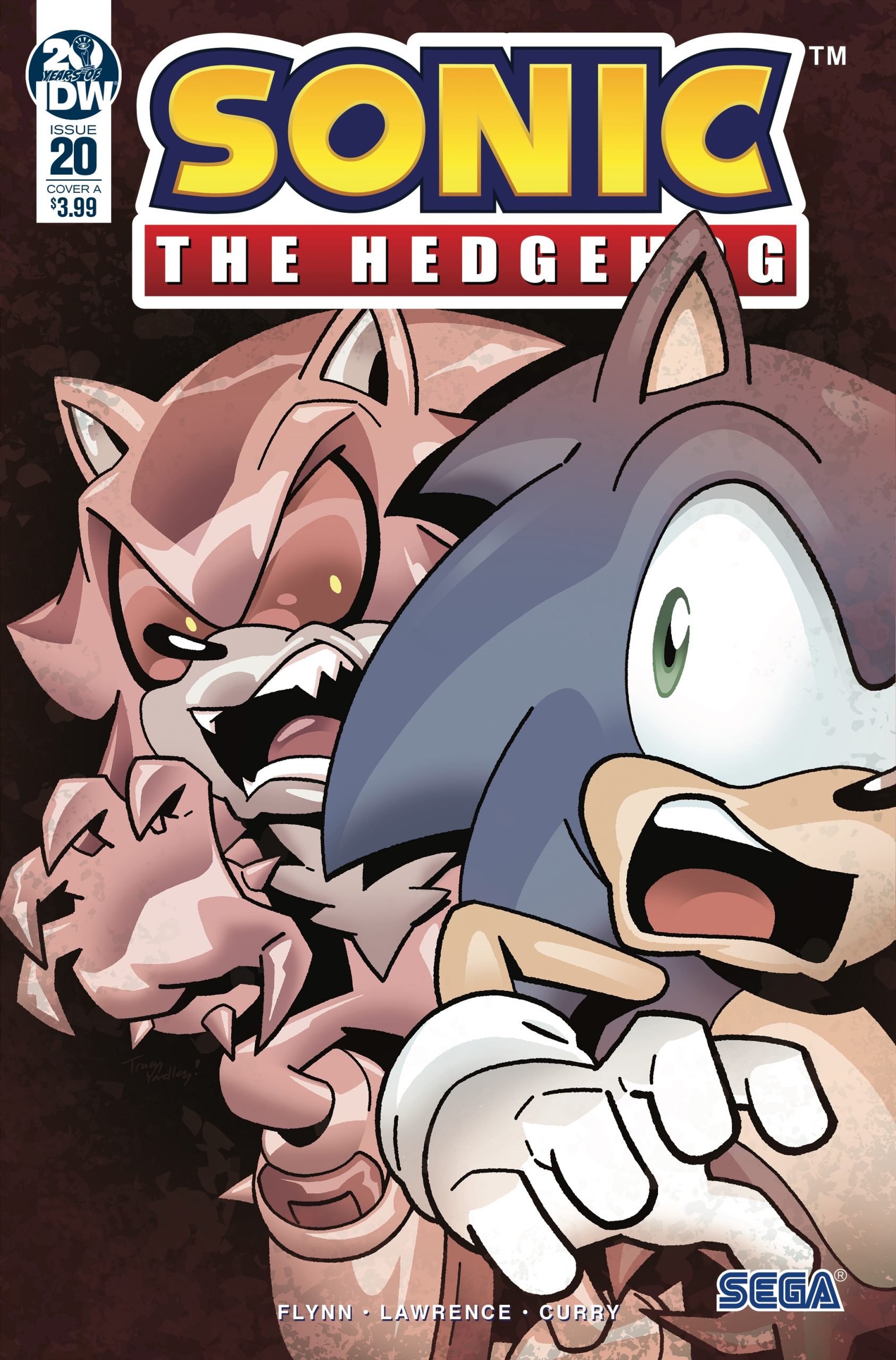 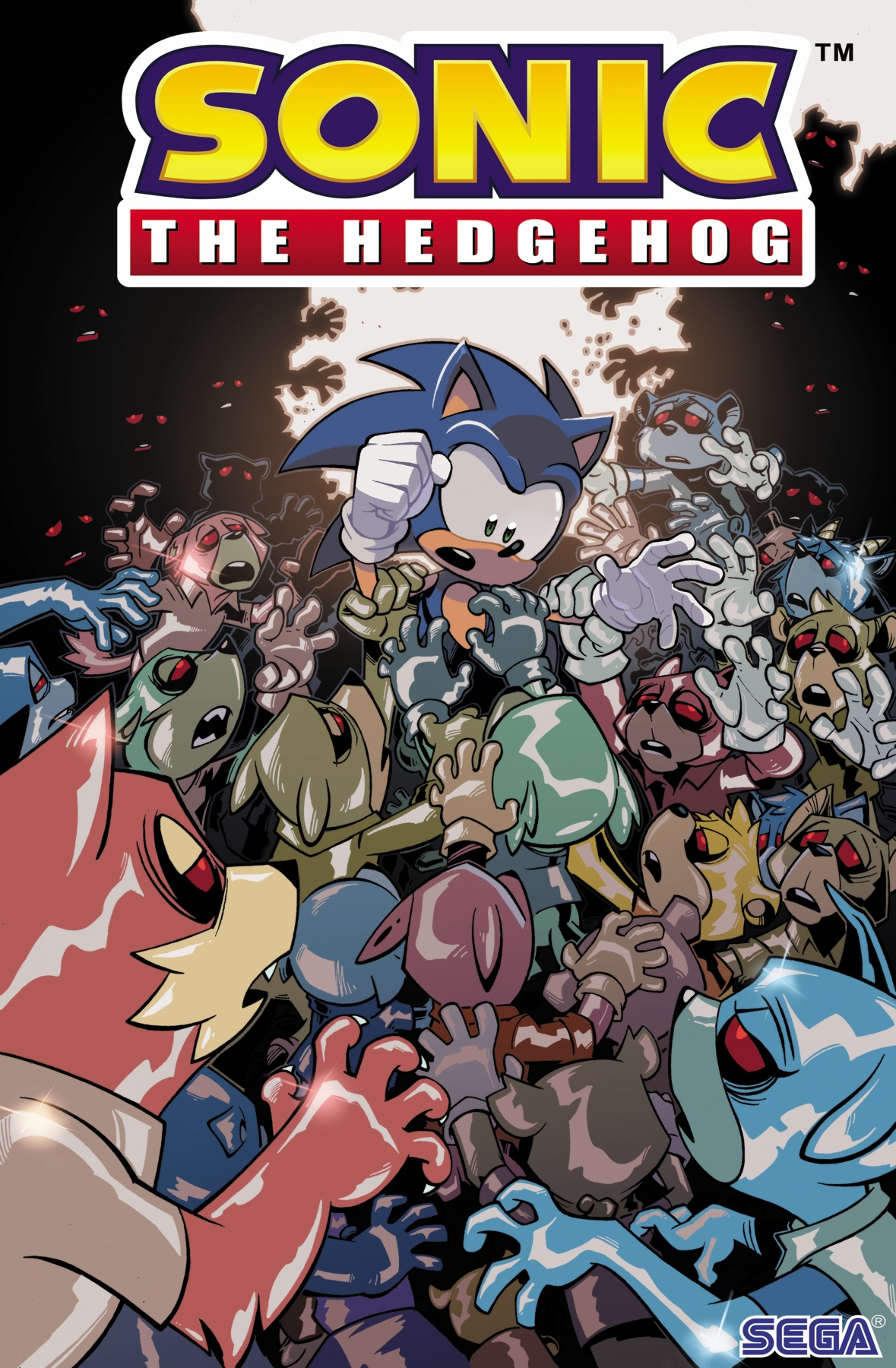 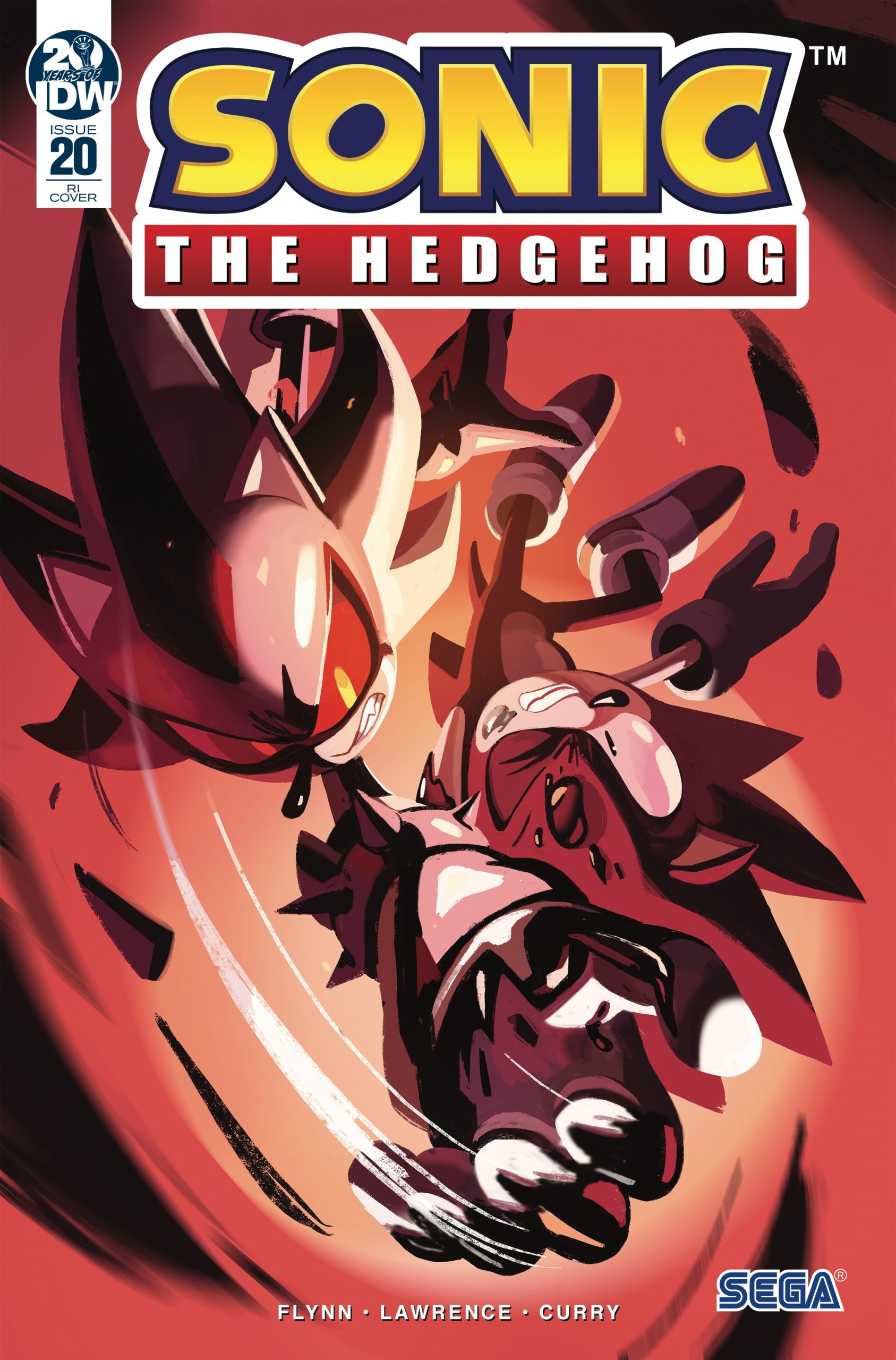 Crisis City, Part 2"! When a powerful ally succumbs to the Metal Virus, Omega and Sonic stand alone against an infected city. And even if they can save the remaining civilians from the zombots, will they be safe from Sonic?

The conclusion of the Crisis City storyline, but not the Metal Virus saga!

In Sunset City, a Zombot Shadow - apparently far more powerful than standard Zombots - holds Sonic by the throat up against a truck as Rouge looks on in astonishment. Sonic believes that Shadow thought he could defeat the Zombots with his raw power alone but as this turned out not to be the case, he takes slight glee in having the opportunity to say "I told you so". Sonic kicks Shadow back, takes him by the arm, flips him over and spins away. Sonic realizes that a normal Shadow would have seen through his maneuvers and countered him, meaning that the Zombot Shadow is not as smart. However, he remembers that he does have to deal with the other Zombots in addition to Shadow. Sonic and Shadow trade kicks, forcing the former to attempt a Spin Attack on him. Shadow instead catches Sonic and slams him into the ground. Sonic begins to rev up into a Spin Dash, launches and then kicks his rival back. Sonic looks around at all the Zombots, knowing he cannot keep up fighting the infected and protecting the uninfected. Sonic yells to Rouge to ask if the citizens were safely secured to which Rouge replies that they had just finished. With this, Sonic requests for her to evacuate the area as he distracts the Zombots further. As Rouge drives off with the truck and rams several Zombots, Sonic realizes that he would be fighting an entire city by himself. Luckily, Omega reveals that he stayed behind as "Eggman's robots" were still present and he needed to deal with them violently. Sonic teases Omega and says that he stayed back to help him specifically, which annoys the robot. As the two fight side-by-side, Sonic soon spots Shadow running after the truck of the uninfected citizens.

Sonic dashes after him and easily catches up, noting Shadow cannot use his rocket skates as a Zombot. He attempts to drag the Zombot back with him but Shadow instead tosses him back to Omega. The robot detects that Sonic's infection was spreading further due to him fighting several Zombots and suggests for him to retreat. Sonic refuses as he did not believe the truck was far enough away and he did not want to leave another friend behind as he tried to cure himself. Omega clarifies that they are not friends and that Sonic was only getting in his way. As Omega cannot destroy the Zombots, Sonic suggests that they both retreat instead but the former stubbornly refuses. Following this, when Shadow lunges at Omega, he grabs him and slams the Zombot into the ground. Sonic reminds Omega that he was fighting Shadow but the robot only saw him as another Eggman robot that needed to be destroyed. The duo keep up the pressure on the Zombots but Omega soon has his chest ripped open by Shadow and his arms ripped off by two other Zombots. Sonic pushes Shadow away from Omega and tries to get through to his rival but to no avail. The hedgehog tries to get Omega to retreat but the robot refuses again, declaring "Victory or death!" even as he is dragged down. Sonic finds himself on his knees surrounded by several Zombots and the virus nears its completion. Suddenly, all of the surrounding Zombots are levitated by Silver with his psychokinesis. The hedgehog is accompanied by Tails who tells Sonic to use the now cleared path to reach the Tornado just outside the city to the east. After the weary Sonic takes off, Tails tells Silver to release the Zombots and cover him while he went to get Omega. Tails takes off Omega's head from his severely damaged body. After being released, Shadow quickly leaps off of a building to grab Silver. He narrowly dodges Shadow's attack and he takes off with Tails.

At Restoration HQ, Cream lets Sonic into the building. As he asks if it is Cream's bedtime, she tells him that her mother allowed her to stay up to help. She has also been having bad dreams lately. Cream tells Sonic that the HQ now housed many scared refugees from the attacks and there was not much room for them. She has been doing her part by bringing them snacks and sweets to keep up morale. Sonic tells her that she is the bravest hero here and that she should keep up the good work. Cream guides Sonic to Amy's office where Gemerl is standing by. Gemerl confirms that he was repaired by Tails and denies Sonic entry to the office due to his hazardous infection. Cream tells Gemerl off, saying that Amy wanted to see Sonic so he had to let him in. Gemerl then stands by again and lets Sonic enter. Inside, Sonic sees Amy coordinating various search and rescue missions. He talks to Rouge, who says she is planning her next move. After Sonic confirms that Shadow is gone, she angrily storms off, saying that he should have listened to her and retreated. Sonic then talks to Amy who wanted to make sure he was okay. As Sonic and Amy have their friendly chat, Amy's attention is soon called to her teams after one of them went down. Feeling useless, Sonic exits the room. He meets Vector and Espio who had finished their sleeping shift and were preparing to go out to find more survivors and supplies. Vector also planned to bring back Charmy should they find him. Sonic asks if that is a good idea but Vector reminds him that he is infected as well. Espio asks Sonic when the last time he slept was and the hedgehog admits that it has been a while since then; he can only afford small naps as the infection would quickly take him over. The Chaotix and Sonic thus say their goodbyes as Sonic goes to meet Tails about his plan.

When Sonic arrives, he thanks Tails and Silver for their help in Sunset City. He then asks Silver if he thinks that the Metal Virus was the cause of his new metallic and lifeless future, to which Silver is positive of. He hopes that with his being here now that they can prevent the virus from destroying the world. Sonic remembers that Silver never mentioned any Zombots but the latter says that this was because he found no one and hoped that they would not need to solve that mystery. Sonic turns to Omega's dangling head and asks how he is. He then asks if Omega can be repaired, to which Tails says that when he has time he will be able to attach Omega's head to something of similar hardware. Losing his entire body has not made Omega any less determined to fight. Tails goes on to say that the analysis he got from Sonic a while back was not robust enough to find a cure but came up with a small solution. The fox cub reminds the two that Sonic's speed was combating the virus (but not completely) somehow which got him working on a sensor that will read Sonic's biometrics as he runs in hope that it will give them more insight into the Metal Virus and how it is reacting to his system. Tails mentions that the computers in the HQ will not be able to handle that kind of data but his lab near Central City would, provided that Eggman had not already attacked there. Silver promises that they will cover him. When Tails asks what will happen if he is called somewhere else, Silver only hopes that it will not have to happen. Taking Silver's optimism into consideration, Sonic hopes that Tails' new gadget will help things turn out for the better. Tails tells Sonic to get the data while he and the Restoration handled everything else.

Meanwhile on the Faceship, Dr. Starline is still realizing that Eggman has no plan to control the Metal Virus. Though they are scheduled to test override signals tomorrow, Starline tries looking up one of Eggman's forgotten assests. He comes across "The Lost World Project" and reads about how Eggman tried to control the native Zeti on a planet called the Lost Hex. After Sonic accidentally liberated them, the "Deadly Six" turned on Eggman and used their electromagnetic powers to take full control of Eggman's Badnik Horde. Starline sees the opportunity in the Zeti's powers as they would be able to control all the Zombots easily.