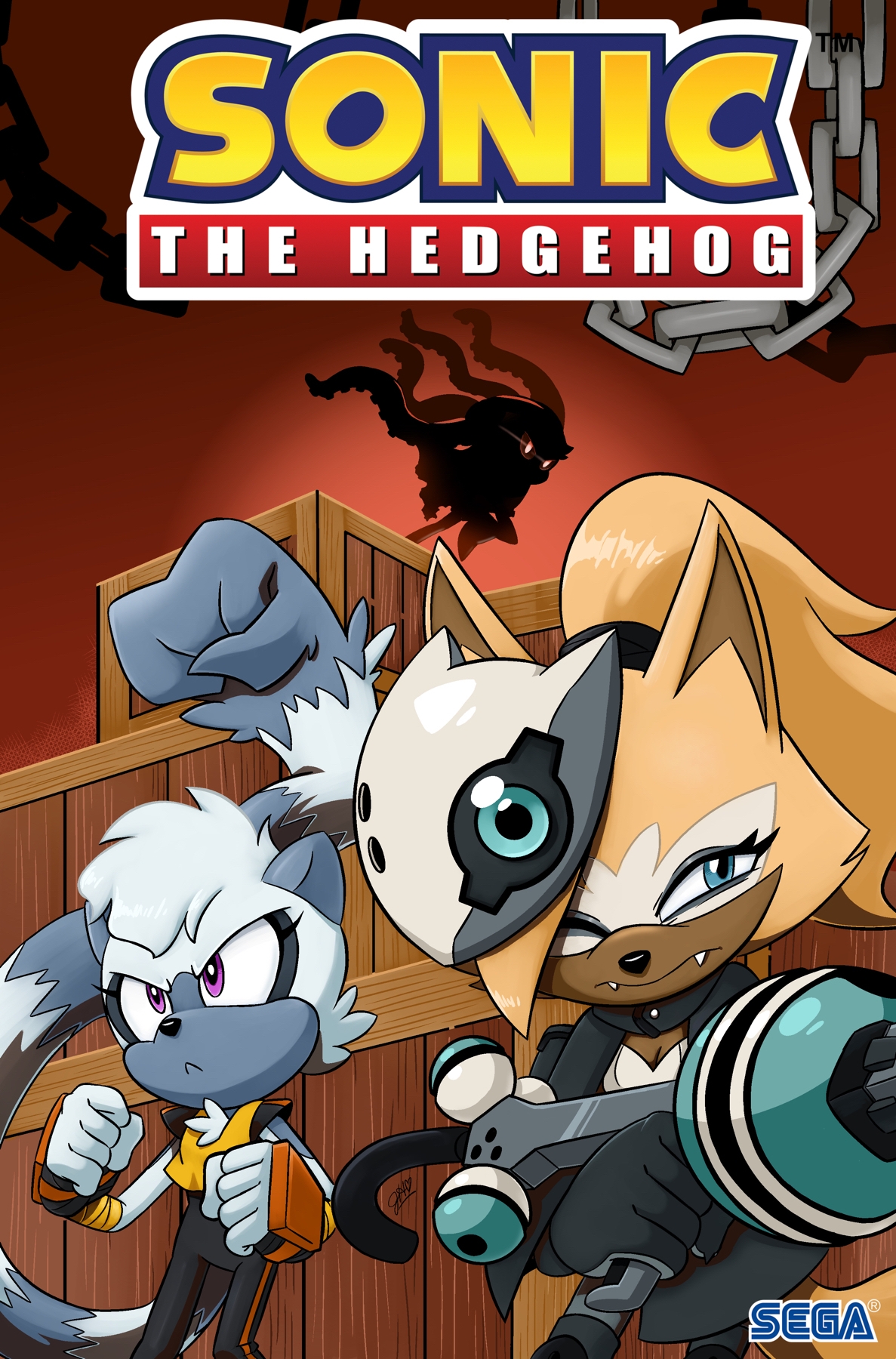 If Tangle and Whisper know they're being led into a trap, the imposter they've been chasing can't get the drop on them, right? Who is this mysterious imposter, why is Whisper so adamant about taking him down, and will Tangle be able to help-or just get in the way? Find out in "Ambush"!

Outside a forgotten Eggman Empire bunker, Whisper attempts to scan the interior with her mask scope. She is soon interrupted and annoyed by Tangle pretending to sneak around. Whisper turns around to her and tells her to stop, leaving the latter to apologize. Whisper reveals that there is no activity on the outside of the bunker and she cannot scan the inside of it, meaning that the duo would be walking into Mimic's trap blind. Tangle tries to see the bright side of this, saying that they would have him backed into a corner. Whisper does not respond, prompting the lemur to realize Mimic would still very much have the advantage over the duo. Tangle asks if they should try to find him another time but Whisper is eager to take the risk. Tangle then suggests that they will be careful and tells Whisper to stop worrying so much. The lemur goes on to say that Whisper already seems to know how Mimic operates and the latter thought that she was a "Diamond Cutter". When Tangle asks if the two have a history, Whisper says "Yes." Realizing that it is a sensitive subject for her, Tangle does not pry further but asks if there is anything she should watch out for. Whisper states that Mimic is dangerous and manipulative and that Tangle should be on guard. The girls head to the back of the Eggman base, unknowingly watched by Mimic. He talks about how winding the search for him must be for Whisper and wonders why he brought Tangle along on the mission. He comments on how this was similar to how she could not do much without the "old gang" and sees how she is now using all of their old Wisps as a crutch, which put him on the run. Mimic recalls watching Whisper let her guard down and talk about him with Tangle and Jewel in the Mineral Museum. Though he wishes he could settle his fight with Whisper alone, he decides to have her handicap herself and effectively shapeshifts into Jewel.

Tangle opens the back entrance to the bunker and slowly walks in with Whisper. Feeling bored, Tangle decides to move quicker and reach higher ground to have Mimic "play" at their pace, so she extends her tail to reach a metal storage unit. She gives a thumbs up to the disgruntled Whisper who sighs and continues to move through the bunker slowly. Tangle begins to silently narrate as she moves through the bunker while also thinking about Whisper's silence and how Mimic has clearly hurt her. She suddenly hears Jewel's voice and moves quickly towards the source. Whisper hears her voice as well. Tangle soon catches up with Whisper and claims to have left Jewel back in Spiral Hill Village. Whisper suggests that Jewel may have been kidnapped after they left and she leads the way to where Jewel was being used as bait. The duo look soon find a safe. As the coast is clear, Whisper tells Tangle that she will cover her while she went to rescue Jewel. As Tangle begins to enter the safe, she considers how worried Whisper must have been as she was speaking more than usual. When Tangle realizes that she did not have her Variable Wispon with her, "Whisper" kicks the lemur into the safe and locks it behind her. Tangle immediately pounds on the door, shouting at Mimic to be fought in the open. She stops, knowing that if she continued she will use up all of the air in the safe. Whisper continues to move around and faces Tangle. As the lemur cowers before her, Whisper demands for her to prove that she is truly Tangle. Tangle shows Whisper a cut on her shirt that Mimic made after he had impersonated Jewel and tried to swipe at her; he soon ran and Tangle went to look for Whisper. The wolf lowers her Wispon and begins to think. Tangle excitedly leads Whisper onward to where Mimic ran off to. Whisper follows and as she turns the corner, she narrowly dodges an attack from an Egg Hammer with a wrecking ball.

"Tangle" stands on the Egg Hammer and laughs; he tells Whisper that not only can he replicate clothing, he can also make it look damaged. The Egg Hammer continues to swing at Whisper. Once the wolf gets her mask scope on properly, she uses the Spikes Mode on her Varible Wispon to cut the chain of the Egg Hammer's wrecking ball. She then uses the Rocket Mode on the Wispon and shoots at the Egg Hammer's torso, destroying it. Mimic manages to jump off and throws a bomb in Whisper's vicinity. The wolf quickly uses her Wispon's Hover Mode to dodge the explosion. She swiftly dodges attacks from Mimic's laser gun and shoots it out of his hand with her Wispon's Laser Mode. With her Wispon's Cube Mode on, Whisper towers over Mimic. He compliments her shooting style but Whisper demands to know Tangle's location. Mimic claims that Tangle is in a safe space and says that he "can't say the same for the others". With this, Mimic begins to shapeshift into different members of the Diamond Cutters, taunting Whisper of how they were his friends as well but she failed to protect them. Whisper hits Mimic with her Wispon and reminds him that he sold them out in the first place. Mimic begins to taunt Whisper again, believing that she has given up on her new friend. He reveals that Tangle is locked in a safe and if she hurries she may be able to rescue her before she runs out of air but doubts that they will make it out before his bombs explode. Mimic grins at Whisper while the wolf realizes she has an ultimatum in her hands. She runs away from Mimic, leaving him to walk out of the bunker and lock its entrance. He shapeshifts back into his original form and says goodbye to Whisper.

Whisper manages to find the safe and uses her Wispon's Spikes Mode to open it. Tangle scrambles out and is helped up by Whisper, who tells her that there are bombs in the facility. They soon see the explosions already detonating, so Tangle swiftly pushes Whisper into the safe and closes the door behind the both of them as the entire bunker explodes. As the bunker is left in ruins and flaming debris, the safe lays on the ground barely scathed. Tangle punches the safe's door open with her tail and gasps for air. As the lemur begins to realize that Mimic was not messing around, Whisper tells Tangle to go home. Tangle turns around confused and begins to beg; she knows that she screwed up after being told how Mimic would attempt to trick her but claims that it will not happen again. Whisper refuses but Tangle persisted, not wanting to be seen as a failure. Whisper says that she is not one so Tangle asks why she was being pushed away. Whisper turns back to Tangle with her mask scope on and exclaims "I won't lose another friend! I can't!" The wolf goes to sit on the entrance of the safe while Tangle wipes away her tears. She sits beside Whisper and tells her that she knows that she has been deeply hurt. Tangle feels that it is time that Whisper told her what happened in her past, promising to remain silent. Whisper wipes her face and turns back, saying that she will tell Tangle everything.