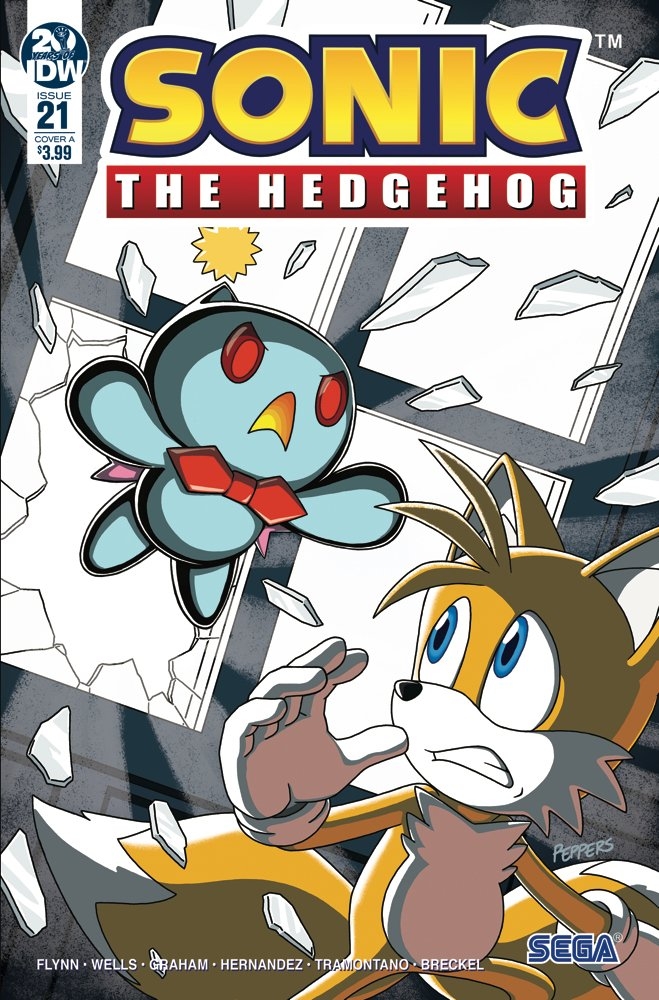 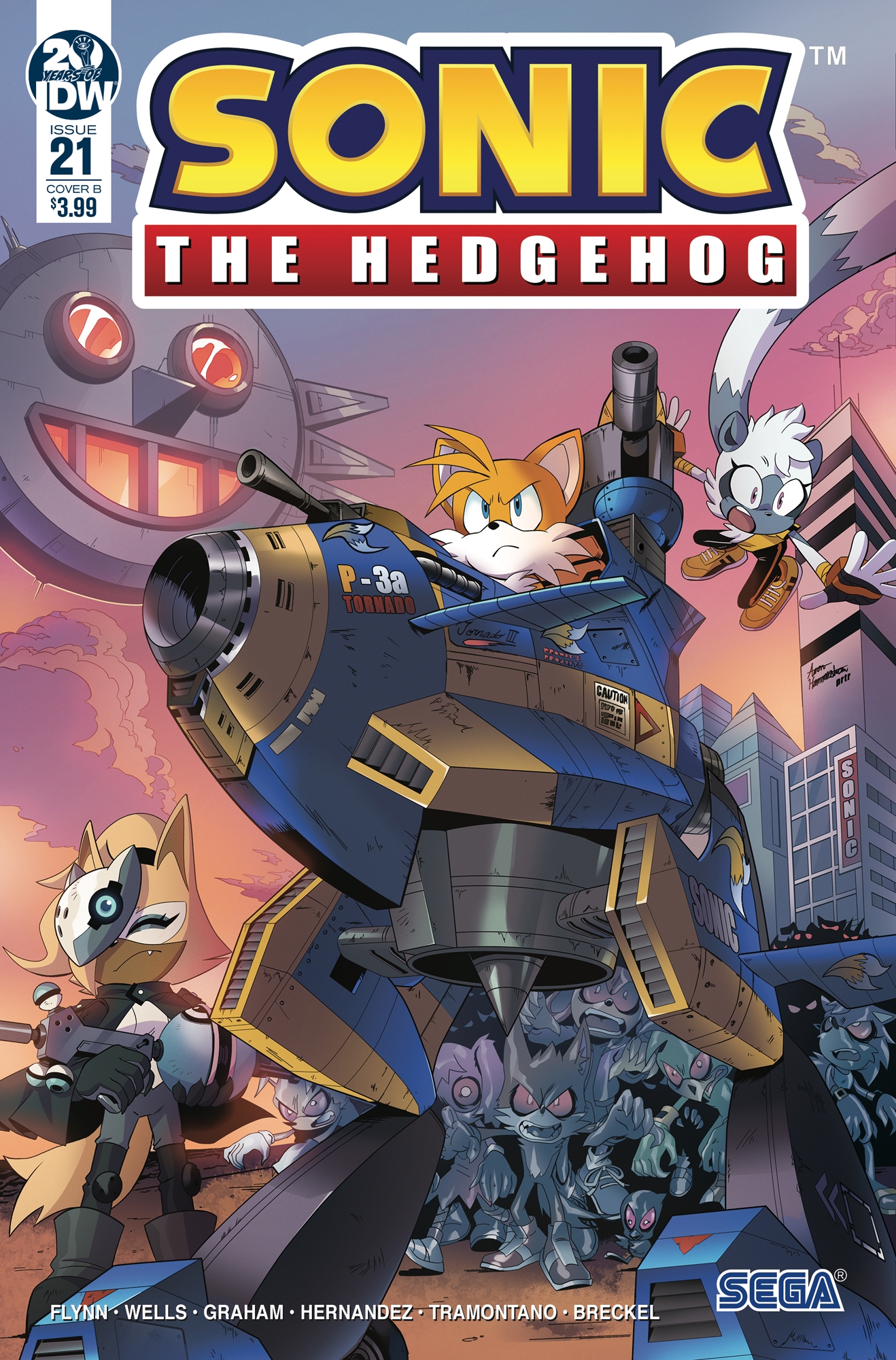 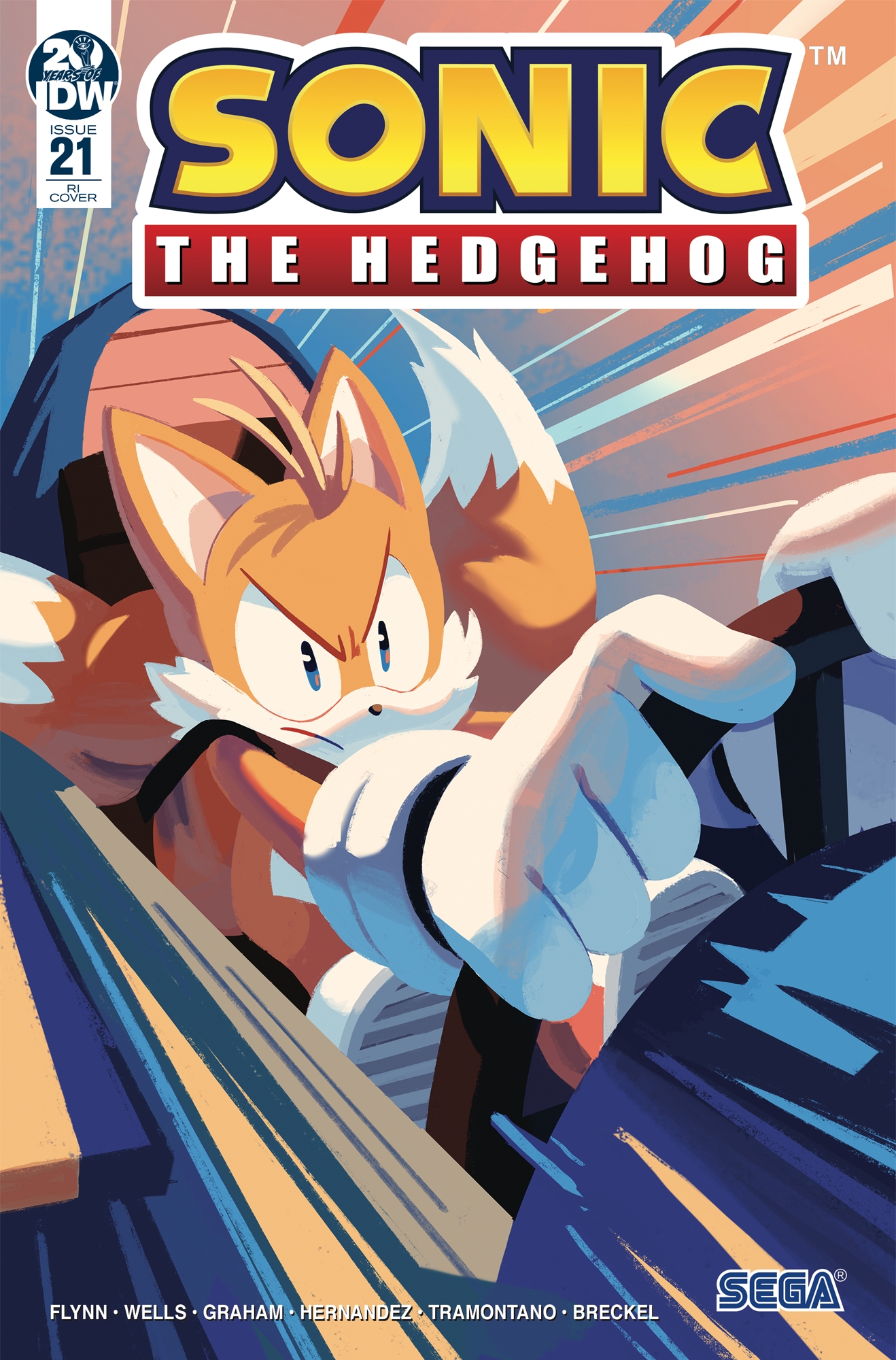 To contain the Metal Virus, the Restoration must split up! In this issue, as Tails researches a cure for the Metal Virus, his lab comes under attack by Zombots. With Whisper and Tangle out saving as many civilians as they can, will Tails withstand the siege and find the cure-or will the whole world fall? The first of three simultaneous stories! Spotlighting beloved characters Tails, Tangle, and Whisper!

Outside Tails' lab in Central City, Tails, Whisper and Tangle watch in shock as Dr. Eggman uses the Faceship to distribute a batch of Metal Virus into the city. Tails quickly wishes to change plans but Whisper tells him to stay. Tangle agrees and tells Tails to continue researching a cure while they handle the city's evacuation.

An hour later, several Zombots roam the streets of the city. Tails continues to hide from them in his lab, believing that Silver's optimism has jinxed his plan. He soon receives a call on his computer from Sonic, who mentions that he is passing the outskirts of Barricade Town. Tails then tells Sonic that the data from his bio-scanner is coming in perfectly; on the other hand, Eggman had hit Central City with Metal Virus just as they had arrived. Sonic offers to turn around and come help with the situation, but Tails tells him to keep running; his speed data may be their only chance to find a cure, and it may serve as a backup should something happen on his end. Sonic complies and tells Tails to stay safe.

Tails is then made to jump by a crash outside; one of his cameras reveals that it was just a Zombot falling over some trash cans nearby. Following this, Tails ends his call with Sonic before contacting Amy at Restoration HQ; he reports that he is slowly making progress with the cure for the virus but is remaining cautious of the Zombots nearby. When Amy asks if she needs to send Rescue Shuttles to Central City, Tails replies that he has been too busy with his research to check the situation, but will ask Tangle and Whisper for a better answer. Regardless, Amy tells Tails that she will tell the pilots to prepare to depart and wishes him luck.

Tails then contacts Tangle for an update, finding the lemur busy fending off Zombots. She states that the mission would be cooler if it was not such a horrible situation. After being spooked by a Zombot close behind her - causing her to climb atop a lamp post with her tail - Tangle reports that she and Whisper managed to save a few civilians and are guiding them down to a dock, also asking Tails to hurry up with the cure. Tails acknowledges this and says that he will let Amy know where to send the shuttle.

The fox cub then turns his attention to the task at hand; by reviewing the Metal Virus at a microscopic level, he now understands that it looks and acts like a real "live" virus. He is aware that Sonic's speed manages to deteriorate the virus' structure, but wonders how that is and how he would be able to apply that to others, not wanting to risk the vaccine being too weak or only partially effective. Tails considers retrieving a sample of the virus itself to help out. Finding no Zombots around, he flies to the top of his lab with a contraption to reach a small puddle of the Metal Virus on the road. As Tails does this, he notices a flock of Zombot Flickies fly overhead. Nonetheless, he manages to get a sample of the virus into a test tube and celebrates an early victory, unaware of the Zombot Cheese and Chocola watching him from nearby.

Meanwhile, in their castle in Lava Mountain Zone of the Lost Hex, Zor reports to Zavok that the Eggnet is in chaos due to whatever Eggman was up to on the world below. They are soon met by Dr. Starline, who introduces himself as an assistant to Eggman and wishes to ask for the aid of the Deadly Six. He explains that Zavok and his team have unique skills that Eggman needs to contain a certain issue. Zavok suspiciously asks if Starline was sent by Eggman; the doctor replies that he was present unofficially, feeling as it would be better to ask forgiveness rather than permission at this point in time. When Zavok asks what the Deadly Six will get out of helping the Eggman Empire again, Starline tells him that they will be able to make amends with Eggman, command incredible power and finally destroy Sonic the Hedgehog. Considering the deal, Zavok agrees to help Starline, requesting some time to gather his team. A gleeful Starline states that he will reach out to the Zeti soon and takes his leave. Following this, Zor comments that Starline made a mistake. Zavok agrees and intends to capitalize on it. He instructs Zor to assemble the other Zeti.

Back in Central City, Tangle distracts several Zombots from atop her lamp post. A particularly large Zombot begins to damage the perch in an attempt to dislodge Tangle. Luckily, Whisper uses her Variable Wispon to shoot the Zombots below the lemur. Tangle quickly moves out of the way so that Whisper can use her Wispon in its Rocket Mode to create an explosion among the Zombots. While she does this, Tangle attempts to contact Amy for an update on back-up; when she gets no response, she tries getting through to Cream and Vector but to no avail. Beginning to worry, Tangle contacts Silver to ask for back-up; unfortunately, the hedgehog is occupied with a Zombot outbreak in Ice Paradise.

Deciding to worry about the lack of backup later, Tangle and Whisper press onwards. The former wonders if it was okay for Whisper to shoot her Wisps at the Zombots but Whisper explains that the Wisps are pure energy when they are fired, rendering them immune to the Metal Virus. The duo are soon stopped by a horde of Zombots, but Whisper manages to use the Hover Mode on her Variable Wispon to float away from the street. Tangle uses her tail to bring them down to a rooftop, where they see that they are now further away from the rendezvous point. Whisper suggests calling Tails, which Tangle promptly does, reporting that she and Whisper have been cut off from the dock by a horde of Zombots with no one to help out. She asks after the cure, to which Tails replies that his computer was almost done processing Sonic's speed data; by applying the hedgehog's biometrics to the fresh sample of the Metal Virus he retrieved from outside, he can apply the data in real time to test models for immunization, as well as the reversal of the contagion. When Tangle asks for a more direct answer, Tails states that he believes he has a cure. He begins to upload the information to Restoration HQ's server before preparing to head out and help Tangle and Whisper, but his computer suddenly shuts down. The fox frantically tries to switch the computer back on, unaware that Cheese and Chocola are busy destroying the lab's main power supply outside. Trying not to panic, Tails removes the server blades from his computer, intending to take them to the HQ instead. He is interrupted by a Zombot who rips into the entrance of the lab and swipes the server blades to the ground, breaking them.

Tails quickly runs to his garage while several Zombots follow in pursuit. They pound on the door for a moment before it is blown open by the Cyclone. Frustrated by the loss of his data when he was so close to a cure, Tails rams his mech straight out of his lab, being chased by Cheese and Chocola. He performs evasive maneuvers to avoid the infected Chao brothers, quickly leaving them in the dust. Tangle contacts Tails to tell him that she and Whisper were heading back down to the dock, asking where he is. The words have barely left her mouth when Tails quickly drives in, knocking aside several Zombots in Tangle and Whisper's way. A starstruck Tangle compliments Tails' moves while he tells her and Whisper to protect the survivors while he covers them with the Cyclone.

At the dock, Tangle sees a Rescue Shuttle arriving, wondering why only one was present. As it lands at the dock, Tangle and Whisper make sure no Zombot followed them and thus begin guiding the survivors onto the ship. Tails continues to fend off Zombots until the shuttle begins to take off, at which point Tangle calls for him to hop on. Seeing the Zombots beginning to rip apart the Cyclone, Tails apologizes to his mech before abandoning it and taking flight. As the Cyclone explodes beneath him, Tails flies up to the Rescue Shuttle to find a despondent Amy and asks about the other shuttles. Amy tells him that their shuttle was the only one left; Restoration HQ has fallen, along with almost everyone that was in it.