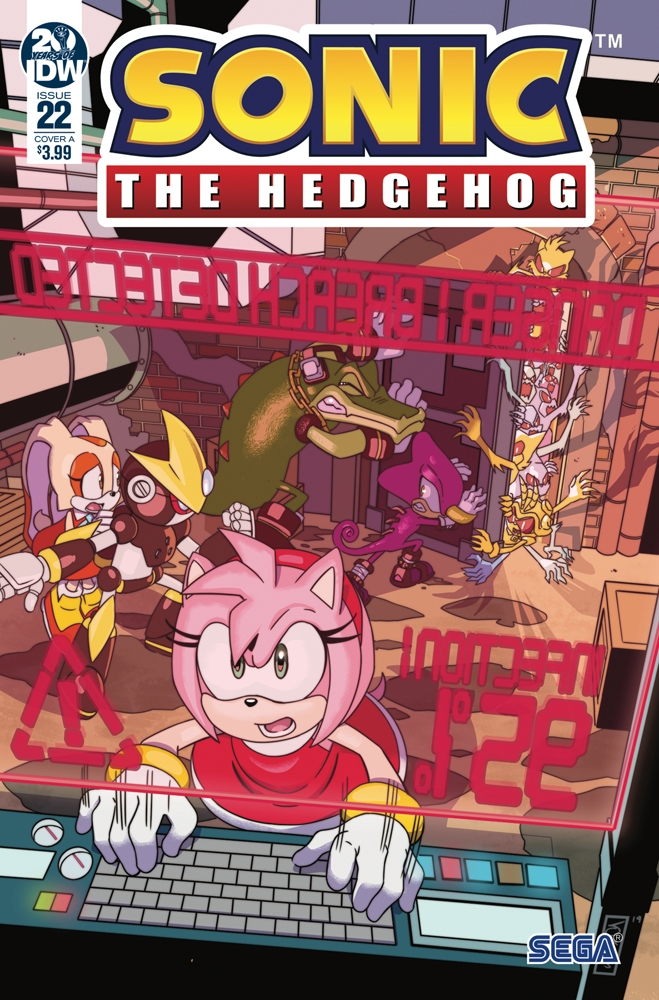 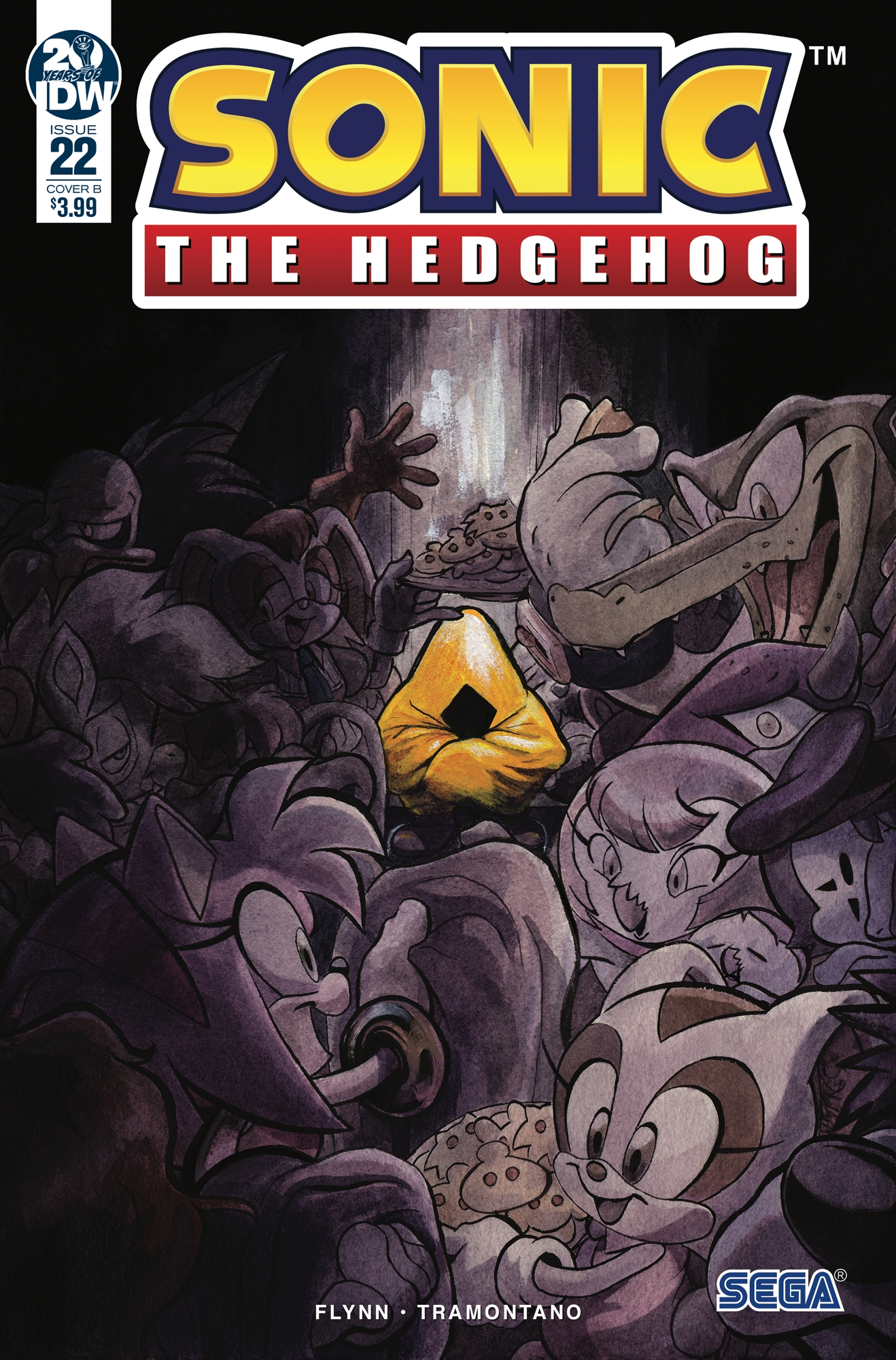 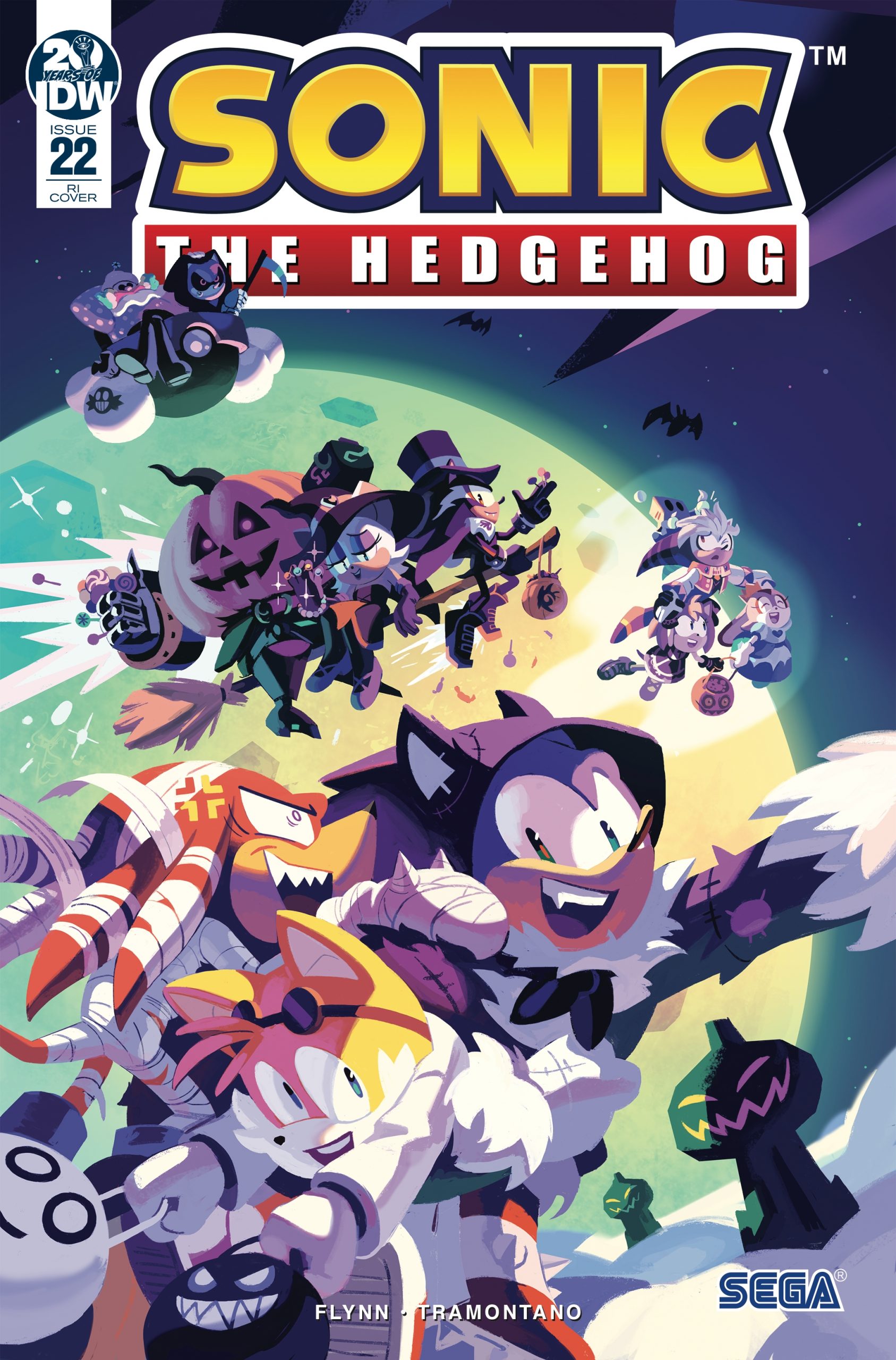 As the Metal Virus spreads faster and faster, it's getting harder for the Restoration to keep up… good thing they've got Amy Rose keeping relief efforts organized! Just as long as nothing happens to the Restoration base, everything will be… Oh… That might be a problem. The second of three simultaneous adventures! Can Amy keep the Restoration and refugees from the Metal Virus safe? Someone's trying to let Zombots in… but who?! Don't miss the Halloween variant cover by Nathalie Fourdraine!

In Restoration HQ, Amy reviews the status of the Restoration's allies; Sonic is running around getting data for Tails and should be near Barricade Town; Tails is doing research in Central City while Tangle and Whisper help with evacuation there; Silver is handling a Zombot outbreak in Ice Paradise on his own; Vector and Espio are reportedly coming back to the HQ with refugees from Pine Grove Village; Rouge is still missing in action. As Amy continues to look at the monitor, she realizes that she is talking to herself too much. Soon, Cream comes into the office with tea and cookies prepared. A weary Amy asks Cream how she does it, leaving the young rabbit to reply that she learned the recipe from her mother, who learned it from her mother in turn. She states that she would be happy to teach it to Amy; the pink hedgehog clarifies that she was asking about how Cream manages to stay so upbeat and sunny.

Cream admits that she still cannot sleep well due to what happened to Cheese and Chocola. However, she sees how her mother and the other refugees are just as scared as her, and their fear spreads like the Metal Virus. Due to this, Cream has taken it upon herself to be as brave as Cheese was and put on a smile to share with everyone else. She adds that she's inspired by Amy; a hero and adventurer who never gives up. Cream believes that Amy, Sonic, and their friends will find a way to save everyone - there's no point in being sad, because she knows things will be okay in the end. Wiping away grateful tears, Amy hugs Cream and tells her that she is her hero as well. As Amy begins to eat her cookies, she gets a video call from Tails.

Meanwhile, on the Lost Hex, Zavok talks to the rest of the Deadly Six about recent developments - the other Zeti seem to be barely listening, save for Master Zik. Zavok explains how they have been invited to Dr. Eggman's base by his newest lackey to help fix the crisis on the world below; he states that they will accept his hospitality and make him pay for it. Zeena points out that this could be another trap, not looking forward to being enslaved once again. Zavok furiously intimidates her into silence, also spooking Zazz and Zomon. The Deadly Six leader states that they underestimated Eggman previously; now that they are well-prepared, the Deadly Six will punish Eggman for their humiliation, destroy Sonic for defeating them, and then destroy their world below as revenge against them both.

Back at Restoration HQ, Amy thanks Cream for her refreshments before the two decide to go back to work. Cream sadly witnesses the refugees struggle among themselves over the little space they had in the HQ. She is soon alerted to an argument between Vector and Gemerl. Vector has managed to capture Charmy Bee in a Containment Bubble and Gemerl was demanding for the Zombot to be left out of the building, pointing out the risk of an outbreak. Vector refuses to lose Charmy a second time as Cream flies down to stop the arguing, reminding Gemerl that they already talked about how Zombots deserved a chance. She assures her protector that Vector will look after Charmy; Espio adds that he and Vector intend to securely store Charmy in Tails' lab alongside Omega. This will prevent Charmy from infecting anyone else while making him immediately accessible as a test subject for any cures that Tails develops. Cream agrees with the plan while Gemerl finds it acceptable.

Elsewhere in the crowd, a female refugee finds some much-needed space next to a villager wrapped in a cloak. She explains that she was evacuated from Glass Hill, while the cloaked refugee explains that he just got in from Pine Grove Village. The female refugee notes that Eggman never visited Glass Hill; instead, they were overrun by Zombots from other places. She soon picks up on the cloaked refugee's violent shivering, prompting him to pull back his hood and reveal the Metal Virus spreading over his face. He barely has time to lament that he did not want to be alone before he completes his transformation into a Zombot, sending the surrounding refugees into a frantic stampede for the exit. Vector tries to restore some semblance of order as Gemerl quickly flies Cream out of the way, but the panic only grows when the commotion causes Charmy's Containment Bubble to break open. With two Zombots unleashed on the crowded and helpless refugees, Espio quickly presses the HQ's emergency button.

Hearing the alarms, Amy rushes to her microphone, ordering all Restoration pilots to go to the Rescue Shuttles and prepare for immediate take-off. Before Amy can do anything more, Gemerl is flung into her office by a Zombot. Quickly hitting the assailant away with her hammer, she demands an update from Gemerl; the robot reports an infection rate of ten percent that was growing exponentially, as he cannot contain all of the active Zombots. Amy tells Gemerl to get Omega, go to the launch bay and scan anyone that would try to get in. Gemerl initially refuses, wishing to protect Cream, but Amy reminds the robot that he was the fastest one in the building and they would need Tails to rebuild Omega later for everyone's protection. As Amy promises to find Cream instead, Gemerl sets off with his new orders.

Amy allows herself a moment of sorrow as she regards the horde of Zombots forming below her, but only a moment. She swiftly jumps into action, using her hammer to both fend off the Zombots and give her a boost as she crosses the base in search of Cream. She soon finds her young friend painfully witnessing Vanilla being cornered and infected by several more Zombots. Despite her predicament, Vanilla's only plea is for Amy to get her daughter to safety, to which the pink hedgehog swiftly obliges. Amy quickly brings Cream to the launch bay, where Gemerl scans them and confirms that they were not infected. Traumatized by the events, Cream tearfully wishes to go back for her mother as Amy turns to Espio and asks about the other pilots' whereabouts. The chameleon informs her that only one pilot made it, along with a few refugees. Amy promises to be with Cream soon as she sadly watches Espio guide the despairing rabbit into the Rescue Shuttle.

Meanwhile, Vector uses his strength to keep the automatic security gates open for more refugees, allowing Gemerl to scan the rest of the base's interior. When the robot confirms that everyone on the inside has been infected to some degree, he and Vector decide to close the gates. However, Charmy chooses that moment to fly straight out of the HQ. Seeing his infected friend aiming for the Rescue Shuttle, Vector seizes the bee to pin him down, spreading the infection onto himself. Noting that Vector is now compromised, Gemerl requests for his immediate quarantine as several more Zombots begin trying to squeeze through the gap in the gates. The crocodile complies and walks back into the HQ with Charmy in his grip, grimly noting this was his price for looking after his own. With nothing left to lose, he begins attacking the incoming Zombots, forcing them back into the base as he tells Gemerl to shut the gates behind him. He has just enough time to smile at Espio, designating him as the new lead detective before Gemerl lets the gates close. As Amy and Espio look on in total shock, Gemerl warns them that Vector will be able to break through the gates once he becomes a Zombot. Acknowledging the risk, Amy helps Espio stand up before the Rescue Shuttle takes off.

At Central City Bay, the Rescue Shuttle lands, prompting Tangle and Whisper to begin guiding the survivors they have gathered onto the ship. Tangle calls out to Tails before the shuttle takes off. The fox cub flies up to the shuttle and wonders why there was only one shuttle left, prompting a devastated Amy to tell him that Restoration HQ has fallen. Tails begins to freak out at the news; even though the upload was incomplete, he still could have used his lab at the HQ to continue working on a cure. With the existing data for the cure trashed by Zombots, Tails and Amy have only one hope left; that Sonic can return safely with his data analyzer. Suddenly, Tangle gets a call from Jewel, who appears to be in a panic.