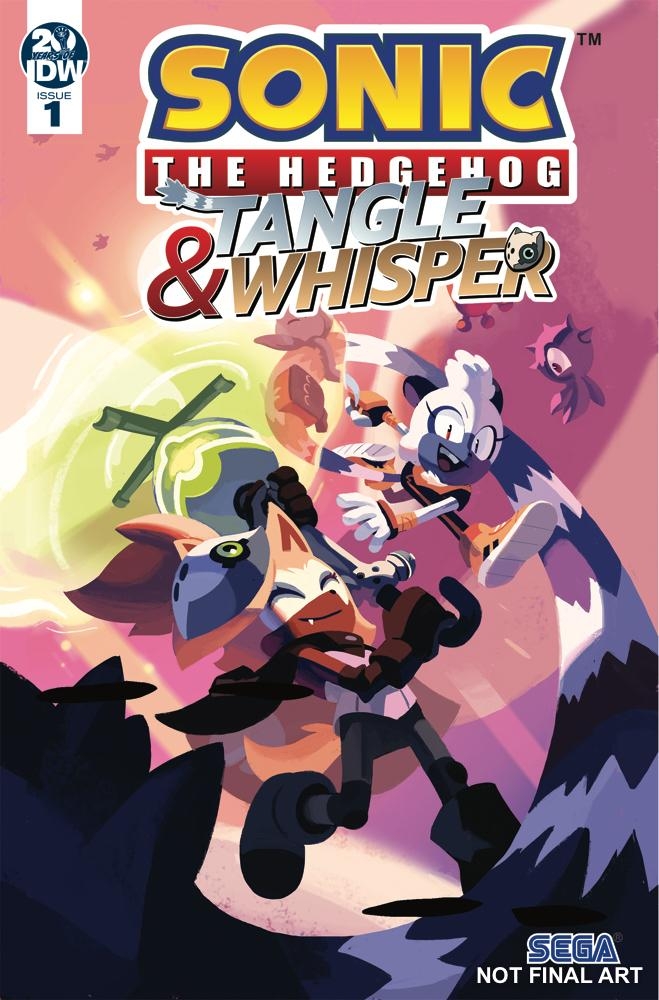 Tangle the Lemur's got a problem: there's not enough action in her life! Whisper the Wolf's also got a problem: she's hunting down an incredibly dangerous enemy named Sonic the Hedgehog! Can Tangle and Whisper help each other solve their problems, or will they just make things worse? A new mini-series featuring two of the most popular new Sonic the Hedgehog characters! Tangle & Whisper are a classic odd-couple in this adventurous team-up!

Tangle is swinging through the streets of Spiral Hill Village, requesting for the villagers to join her in a race around the town. She soon meets Jewel and tells her that it was about time she stepped out of the Mineral Museum for a bit, though Jewel lets her know this was only due to Tangle nearly knocking over the sign above her door. Jewel warns Tangle that she will run into someone. Tangle scoffs at this thought, knowing fully well she has been swinging around the town since she and Jewel were little. As Tangle lists off how well she knows the town, she crashes into a chili dog cart. Ron, the owner of the cart, greets Tangle with an unsatisfactory look. The upside-down Tangle greets him back, asking for a couple of chili dogs to go.

Back at the Mineral Museum, Tangle has an ice pack on her head, expressing how embarrassing it was for her to run into the cart. Jewel teases her, saying the cart was out to get her by hiding behind a street lamp. Jewel then asks why Tangle has been more hyper lately as she is usually precocious. Tangle tells her that she is like this because of her adventures with Sonic the Hedgehog and his allies. She has realized how boring her life became once again after returning to her home town. Jewel reminds Tangle that she has always been like that and asks what is stopping her from going out and finding her own adventures like Sonic. Tangle states that she has thought about it but did not want to leave in case Dr. Eggman's forces attacked the town again. Jewel adds that it would be the first time she would be going solo, with Tangle expressing how she would not have Jewel to watch her back.

Suddenly, Tangle and Jewel hear a crash from outside. A frightened Jewel crouches down behind her desk, worried the Babylon Rogues have returned to town. Tangle instructs Jewel to hide while she swiftly goes off to check out the commotion. Tangle exits the museum to see "Sonic" running away from someone shooting at him. Tangle jumps in to protect her friend, only to see that it is Whisper attacking the hedgehog. The villagers begin to notice the commotion, with Sonic assuring them that he is the real deal. He continues to dodge more laser shots from Whisper and ducks into an alleyway. Whisper uses the Hover Mode on her Variable Wispon to reach some rooftops and take aim at Sonic with the Wispon's Spikes Mode. To avoid the wolf's trouble, Sonic starts talking to a villager to make sure she stayed in Whisper's shot as well. Due to this, Whisper angrily moves to a different rooftop. As Sonic finishes chatting to the villager, he tries to lurk away only to be stopped by Tangle. She asks for what is going on and why Whisper was shooting at him. Seeing Tangle's concern as an advantage, Sonic goes on to state that Eggman put a mind control chip in Whisper's mask scope and sent her on a warpath. Due to this, he could not bring himself to hurt her. Tangle understands and decides to stop Whisper herself, with Sonic asking her to take her down first and ask questions later.

Tangle climbs up a building to find Whisper. The wolf herself takes aim at Sonic once again, with the latter shooting her a sinister look. Before anything can happen, Tangle tackles Whisper. Whisper quickly kicks her off but the lemur persists. Not wanting to hurt her friend, Tangle snatches Whisper's mask scope and celebrates her victory. Whisper demands for the mask back but Tangle refuses, telling her that Eggman had booby-trapped it. Whisper denies that this is the case, leaving Tangle to ask why she was shooting Sonic. The wolf reveals that it was not truly Sonic. Tangle pauses for a moment and believes they can still reason with Sonic, only to find that he had run off. She turns back to Whisper, asking for an explanation. Whisper simply puts her mask scope on Tangle to play a recording of an earlier encounter with the faux Sonic. The recording shows Sonic finding Whisper, stating that he was looking for her. Whisper was also doing the same as he was causing trouble and being targeted. According to Sonic, Whisper was also being targeted as "he" had found out one of the Diamond Cutters was still alive and "he" did not want the job left unfinished. Tangle stops watching the recording once the faux Sonic pulls out a dagger and reveals his true face. Once she asks who that was, Whisper does not tell her as they were too exposed. Tangle knows a place for them to talk in private instead and the duo head off, unknowingly watched by a faux villager.

At the Mineral Museum, while Whisper's Wisps are playing, Jewel, Whisper and Tangle have some tea. Whisper explains that the faux Sonic was actually a person named "Mimic" who had the ability to shapeshift. According to the wolf, he is a mercenary that betrayed his own team and helped Eggman wipe them out. Recently, Mimic took up the form of Sonic and started causing trouble in several odd areas. Whisper took it upon herself to investigate and found that it was indeed Mimic and not Sonic. She mentions that Tangle may be targeted among others. Tangle compliments Whisper for looking out for them but Whisper was looking for Mimic anyway. Jewel then speaks up, telling Tangle that she should join Whisper in tracking down Mimic to give her a reason to go out into the world and seek adventure. With the Wisps joyfully joining Tangle, the lemur declares her determination to defeat any evil she, Whisper and the Wisps come across. Much to Tangle's dismay, Whisper declines Tangle's offer. Tangle begins to question why, reminding Whisper that they helped defeat Neo Metal Sonic and beat the Babylon Rogues together. Whisper still refuses Tangle's help, leaving Tangle to wonder if they were friends and why Whisper would not let her help. As Whisper takes a second to process, the Wisps surround Tangle and hug her. As Tangle points out that even the Wisps wish for her to join, Whisper gives in and accepts Tangle's offer. Jewel warns Whisper to watch Tangle's back as much as she would watch hers and comments that Mimic may not be easy to find.

Soon, the trio hear a "thunk" at the door. This alerts Whisper and she immediately activates her Variable Wispon's Cube Mode. She kicks the doors open but finds no one outside. Instead, she finds a letter left hanging from the front door by a dagger. Whisper reads it and passes it to Tangle, stating that it was an invitation by Mimic to finish things once and for all. Tangle reads the letter with a frown and finds some relief in not having to track Mimic down. With this, Tangle and Whisper prepare to find the shapeshifter.