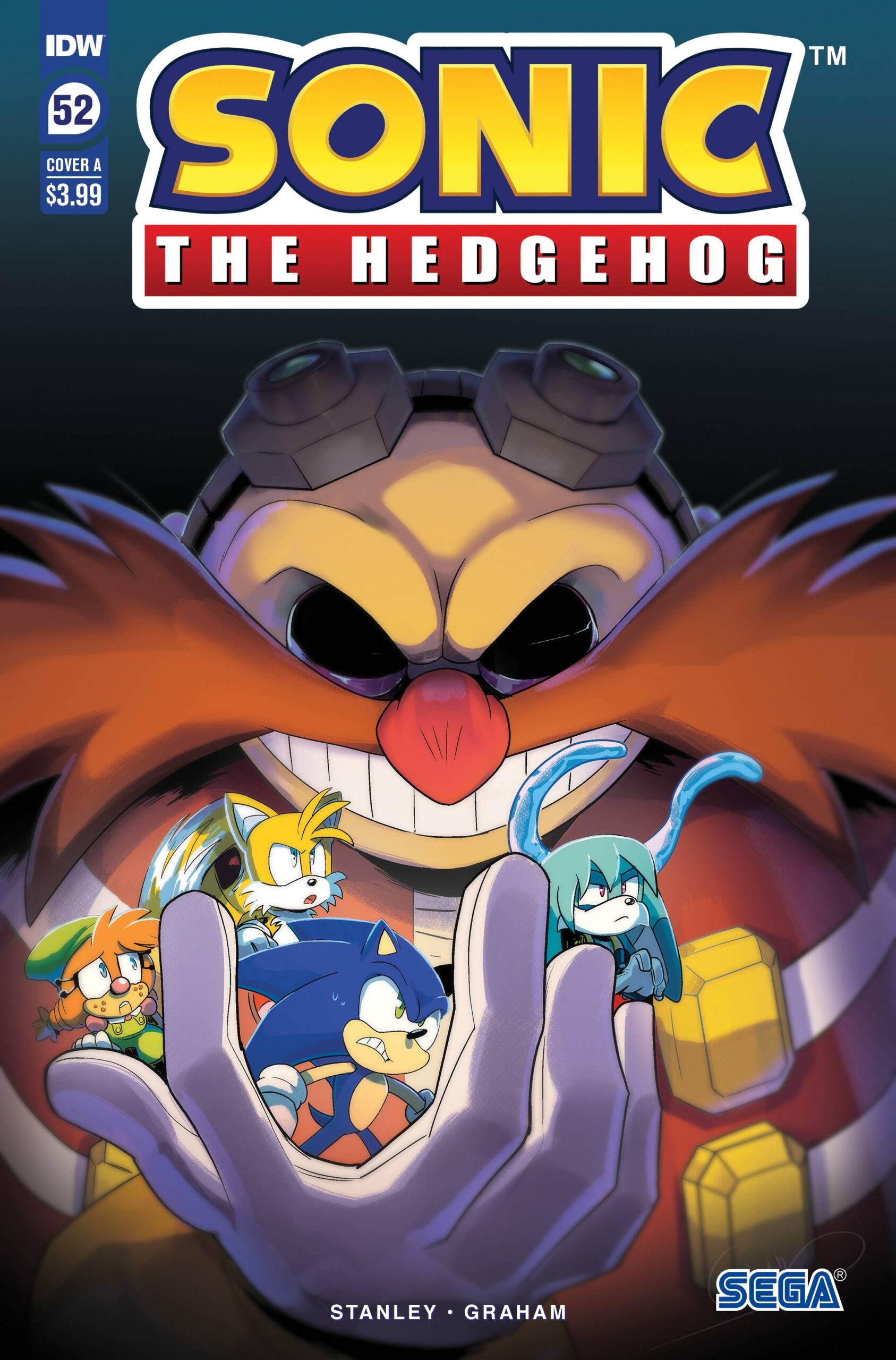 Metal Sonic looms over Tails and Belle, who are both supporting an injured Sonic, at the site of their crashed aircraft. The robot charges up another attack , prompting the others to evade him. Before this, Tails quickly unfastens Kit's seat belt and moves him out of the way with the rest of the gang before Metal Sonic can hit them with his V. Maximum Overdrive Attack. The group goes into an alleyway to prevent Metal Sonic from gaining speed. Tails recalls the layout of the city and makes plans to head left, only to be cut off by Metal Sonic who bursts in from the side of the wall. Belle begs for Metal Sonic to stop his assault, to which the robot ignores. Tails throws Sonic up to a platform carrying boxes and barrels leading Sonic to kick the platform with his non-sprained leg. This causes the rubble to collapse on Metal Sonic and temporarily slow him down. As they reach safe shelter, Kit struggles in Belle's grasp. He elbows her nose, causing her to fall over and unintentionally pin him to the ground. Tails attempts to reassure Kit that nobody will hurt him, but the fennec refuses to listen. He asks where Surge is, as he's been gone too long and she'll be upset that he has been gone. Sonic notices that Metal Sonic has begun to make his move once more and requests that Kit help them deal with the robot. Kit obliges, but notes that his Hydro Pack will need to be refilled. Belle kicks open three reservoirs, allowing the fennec to happily resupply. Metal Sonic blasts out of the alleyway, Kit utilizing water coils to pin him to the ground before breaking apart large crystals in the back. Just as Metal Sonic begins to arise from the water, the debris falls on top of him.

Beneath the Eggperial City, Surge slams her fist in anger. She denies the possibility of being discarded like trash and scales a mountain of scrap in a fit of rage. Just as she gets to the top, a large tank begins to approach her. She jumps out of the way only to see Dr. Starline's glove fly to out of the rubble. Surge grabs it, figuring that the doctor would not let it go unless he was defeated by Dr. Eggman. She questions whether or not she's free, but throws his glove onto the conveyor belt while claiming that he was weak and she would do better. The glove proceeds to burn upon reaching the incinerator. She climbs onto the tank behind her as she tells herself that she will become stronger than Starline could ever imagine.

Cubot is searching for duct tape among a box of evil office supplies, but stops as soon as he hears noises coming from a trash chute. In spite of the fact that he tells himself how Orbot would tell him not to mess with it, he goes to check what's going on only to be grabbed by Surge. She begins to search around for weapons and comes across a pistol, but admits it isn't her style. As she is looking for something more 'hands-on', she finds a device on a desk. When Cubot refuses to tell her what it is, she threatens to break him into pieces. He obliges and explains that it's a Dynamo Cage. It's meant to harness energy, such as the Hyper Go-On from Wisps. Even if they don't want to share their power, the cage sucks it up anyways. Just as Cubot voices his concerns about potential bugs, Surge drops him and attaches the Dynamo Cage to herself anyways.

On the wall surrounding the Eggperial City, Sonic and Belle overlook the setting. Tails lowers Kit to the ground as Belle sighs in relief over how they're finally out of the city. Sonic acknowledges how as long as the city stands, Eggman will continue to break things. A loud noise is heard in the distance, Sonic immediately knowing that Metal Sonic is back up and running. Metal Sonic rises into the air, Sonic keeping Belle behind him. Metal Sonic prepares another V. Maximum Overdrive Attack, but suddenly stops as Belle runs in front of him. She tells him that if he wants to get to Sonic, he'll have to get through her. Belle points out how he doesn't have to fight, only for the robot to smack Belle to the side. Sonic remarks how low of a blow that was and is about to get into a fight, only for an explosion to come from the main tower. He mocks Metal Sonic, telling him to 'run back to Daddy Dearest' to make sure Eggman's okay. Angry, Metal Sonic departs. Sonic checks up to see if Belle is okay, but she does not reply. Tails quickly flies up upon hearing the explosion, Sonic catching him up to speed on what just happened.

Inside the Eggperial City's main tower, Eggman waves away the dust coming from a room. He shouts to Cubot that if he touched a prototype, he would be turned into a rice cooker. Surge sarcastically apologies and emerges from the smoke, donning the Dynamo Cage. She remarks how fun 'this' is going to be.