Sonic Adventure STC: Out With A…BANG !!!

Sonic Adventure STC: Out With A…BANG !!!

Sonic Adventure is more than just a tie in for STC fans. It also marks the coming of the end of new stories for the long running United Kingdom’s “Sonic The Comic”. Well known UK STC fan Ed Reynolds talks about the UK side of the Sonic Adventure adaption! Was it any good? And as the final story in a 184 issue masterpiece called Sonic The Comic – will the book go out on a bang or a whimper? 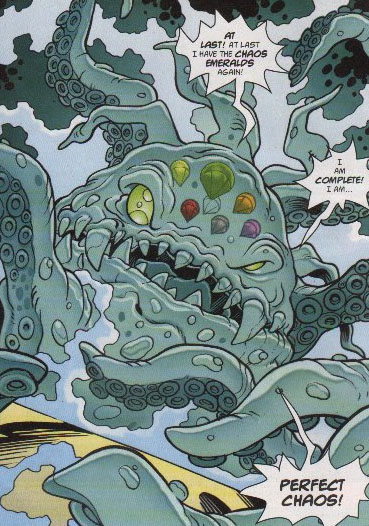 I think the reason why Richard Elson gave Chaos a makeover should now be pretty clear to all 'Sonic the Comic' readers – and it's a great reason. In fact, the whole thing is great.

What I like most is that the creators haven't just ripped off “Sonic Adventure” or just chucked in a Freedom Fighter or two. Sure, the events and characters (particularly Chaos and Pochacamac) are nothing like the game, but who cares? With such limited space, the comic has done a marvellous job keeping the reader guessing.

“Coming of Chaos” was all right; some great introductions to all the characters, and I love the explanation of Sonic getting his green eyes (by being stuck in Chaos for a few seconds). “What Price Victory” of course was great – the death of Johnny Lightfoot was really touching; great writing and great art. This opening 2-parter had quite a nice steady pace to it; it's the most 'modern' of the 10-part story. Things got better from here, but I still like this introduction for its 'fresh' tone. At first, Chaos' power to incite fear into people annoyed me, but now I love it. And Richard's great Chaos design just looked better with each passing episode. By 182 (page 5) he was terrifying.

Who'd have thought that Robotnik's final saga would have him give up? It's a brilliant twist. Robotnik's really been getting the focus lately, with Lew Stringer pulling a stunning twist and having him decide to destroy Mobius, and now Nigel Kitching writing him into a mad depression.

Then there's the fall of the Floating Island in “Night Terrors” and “Splash-Down”. The brilliant thing here is that Sonic gets about seven panels over the two issues. The focus is on Robotnik (who looks GREAT in his SA coat – I'm glad he didn't turn 'skinny'; it looks cool in the game, but wouldn't fit in STC), and of course – Knuckles! As tragic as Johnny's death scene is probably the bit where Knuckles gives up and asks Amy and company to leave and let him die with the island. There's a lovely raft of character moments here; Amy's cheeky solution, Knuckles' decisions.

But the enormity of what happened to Sonic here shouldn't be underestimated. Disappointingly, the reasons for his return never got explained, and although the space did move the story on I can't really see that this is anything less than essential. But it's touching to see Sonic's determination. The only time he's ever quit, or even appeared to look like quitting, is quite a monumental moment. And of course he gets over it. This is why Sonic's such a great character – that spirit really does make him an icon. He's not particularly nice, but he is a real hero.

We jet off to the ancient past with Tikal next. I think “Out of Time” (issue 179) was a bit disappointing, although Knuckles in the past was neat. The glimpse of the Kohenyu was welcome too.

Pachacamac and Tikal are different from the games, in that they've got a good relationship but it doesn't matter. The whole Drakon backstory is ingenius and thrilling. I like the Sega backstory, but I don't care that it isn't the same – the replacement story is complicated without being confusing and is packed with twists and turns. Who'd have thought that Chaos would have been a mere Prosecutor in days gone by? 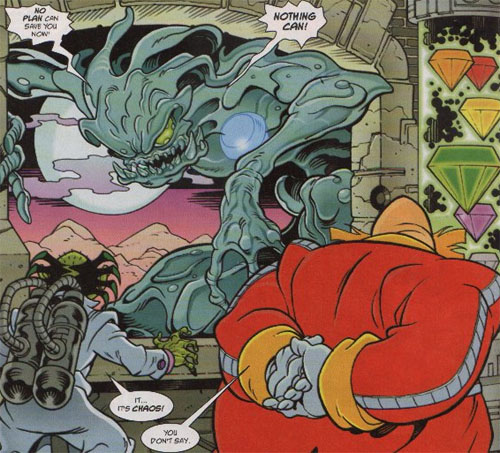 What impresses me about the story is the way that Nigel Kitching has fabricated some of the most brilliant stories in the comic's history using very few panels. Thus far, there has been one double page spread (admittedly with 4 supplementary panels), three full-page panels (in issues 177, 179 and 183), and in 182 there were FOUR three-page panels. Not much storytelling then? Wrong. In fact, there's a ridiculous amount told. But this is all due to Richard Elson running with the space Nigel's given him; and then some! Issue 182 is crammed with great little touches, despite having a pretty measley panel count. Who could forget Sonic hovering over telling Tikal that the Echidnas face of a future population of merely Knuckles and “some creep called Zachary”? Or, more dramatically, Sonic returning from the past by appearing inside Chaos and splashing out of the creature.

Robotnik just gets better. He might be effectively comic relief but this doesn't mean that he's just a Mr. Blobby (or indeed Mr. Blobnik — see issue 59). His abandon towards the upcoming doom of the planet is scary. Nobody could doubt that Robotnik is now a nutcase; and then some. Even Grimer sees it. It's gorgeous.

And issue 183? A bit disappointing actually, since Perfect Chaos looked less scary and acted less effective than his previous incarnation, whilst the arrival of Super Sonic (back at last!!) was a bit clumsy in its handling. Can't wait for the conclusion though. Even a below-average story for this saga is going to be quite a feat to behold.

STC may be walking wounded and will be a zombie from 185, but let there be no mistake – this comic is going out with a bang that'd make Vesuvius proud!