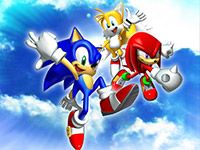 It’s hard to believe that Sonic Heroes released nearly 14 years ago already. It released to mixed but generally positive reviews(on GC) but how has it aged and what do we think of it in a day that platformers as a genre have not only progressed a lot but also aren’t nearly as big as they once were?

In Sonic Heroes, Sonic jumps into action once more in a fairly lengthy platformer. This time, he brings his friends! A Sonic game that full embodies the word ‘teamwork.’ Even more so when you need to switch between trio, Sonic, Knuckles, and Tails, in order to finish the level. Of course we know each character has their own powers and set abilities. Knuckles is the muscle, Tails is the wings, and Sonic is the speed. Oh, and it gets a lot better. With Shadow The Hedgehog making a grand hit in Sonic Adventure 2, you know they needed to bring him back. He is joined by Rouge The Bat and a beefed up robot-on-steroids version of Gamma from SA1, who goes by the name of Omega. Also, making an awesome appearance in this ‘teamwork’ game is Team Chaotix. Vector the Crocodile, Charmy the Bee, and Espio the chameleon are the three who make up this fantastic team. Last but not least… Well, maybe least, is the final team called team Rose. Amy, Cream the Rabbit, and Big the Cat make up with soft yet hard hitting team. Now, before we get into the actual story plot, let’s take a look at the teams and their intros, as well as the part they play in this story.

Now! On to the actual plot and story line, as well as some opinions on the game. The main plot of the story is all about Metal Sonic and he has returned with some major upgrades. They brought back a classic rival of Sonic, revamped him(now going by the name Neo Metal Sonic), yet reverted him back in the end to his original form so they wont totally screw up an awesome bad robot. Me being a story writer myself, I’d say the general aspect of it was pretty solid. He pretty much goes against his creator and turns the tides on him. For once, the main villain is not Eggman, so to speak, and the bad doctor is the one that actually needs saving. His whole plot was to collect all the data from the ‘Sonic Heroes’ in hopes to defeat them all. He set Sonic and his friends up to collect their data, he most likely set up Rouge the Bat to free Shadow so he can collect his data too, unless that was some twisted good flip of the coin and happened by chance. He stole Chocola-Choa and Froggy to collect the Chaos data, which is most likely how he got himself to liquify the way he does making him one heck of a shape shifter. Having said that, I think Neo Metal Sonic Dragon form was a bit too much. I think it would have been better if he actually took the form of Chaos, since he supposedly copied the data for it which would have given more of a reason to throw in Team Rose. Team Chaotix plays their role in this because they were actually trying to save Eggman from Metal Sonic.

Main plot aside, I actually didn’t see a need for Team Rose to be a playable team. I’m assuming Sonic in the article that Amy looks at, at one point during the game, is actually Metal Sonic since Sonic himself has no clue what Team Rose was talking about when they confronted Team Hero. I feel that the only tie to that team is Froggy and Chocola-Choa, which weren’t really needed in the overall plot. It could be the father in me that just finds something weird about a grown man hanging out with two little girls. Also, the fact that Cream can lift Big several feet into the air is ridiculous. I mean, I find it hard to believe Rouge can lift a robot who probably weighs more than Big. But then again, she was planning on stealing the Master Emerald in SA2 all by herself, and she wasn’t planning on taking it in pieces either. 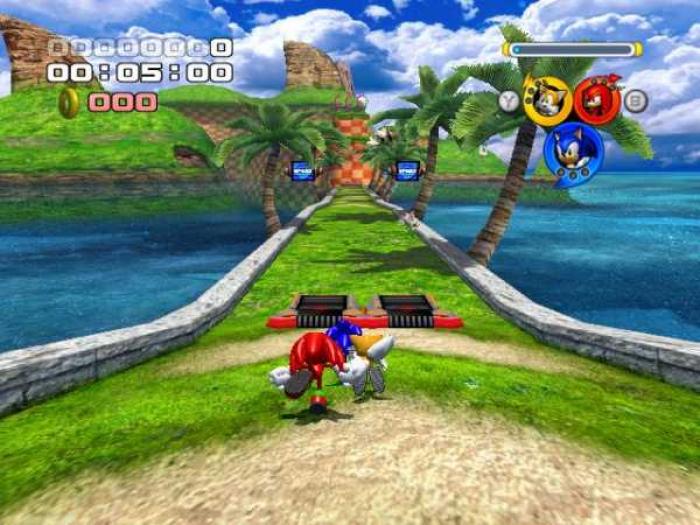 The game play of Sonic Heroes wasn’t too bad but just a little disclaimer the GameCube version was actually the best version followed by Xbox and PS2. The PS2 version was only 30fps as opposed to 60 making it vastly inferior. That said you could still enjoy the PS2 version if that’s all you have. Unlike the Adventure games, Sonic Heroes required you to switch between the three types(Speed, Power, and Fly) in order to reach the goal. Each character could ‘level up’ when you collected the proper color schemed orbs. On the down side to that, once you died you reverted back to zero. Each character could only go to level three. I felt like that aspect of the game was so important if you really wanted to get through the levels smoothly. Also running through a checkpoint with the right character as the lead gave you an automatic level up, which was cool until you realized that those checkpoints didn’t save your level up status. It was good to see the difference in the attacks when you reached a new level. You got a chance to see the effects of how much stronger you are, which was pretty awesome in my book. It’s a minor detail but I thought it grand.

Now, the part I hated most about the game was getting to the final boss, Neo Metal Sonic. The way you do this is to collect the seven chaos emeralds. It’s simple, right? Ha! Wrong, oh so very wrong. Well, it sounds simple when explained, but actually doing it was super annoying. First off, you had to find a key in a cage during your run of the level. Once you got that key and you made it to the end of the level, you go into a bonus stage. Some bonus stages are simply that, bonus stage. However, some bonus stages have one of the seven chaos emeralds in them. The trio, which every team you are, needs to chase the Emerald and catch it before it goes bye-bye. You do this by collecting this balloon-looking balls which give you super speed. You need to keep collecting them in order to keep your boost juice flowing. If you run out you slow down and the Emerald slowly drifts away from you. Oh! By the way, they’ll be fields of spiky exploding balls you can run into which will slow you down immensely. So you need to dodge them, collect the balloons, figure out the wacky patterned of the stage, and hope you don’t screw up. Because if you fail, you have to play the entire level ALL over again, get the key, and reenter the bonus stage.

All in all, Sonic Heroes was a decent game. The controls were pretty basic, the story was well put together, all though I have some theories and speculations on some things, but over all it was pretty solid. I didn’t like a few things, Team Rose being a big factor, but I enjoyed the game and would play it again. In fact, I have played it several times(for research reasons and character creating reasons). I can’t really complain too much about it. Also, I think it was the next big hype about Shadow’s future. Is he alive, is he dead, are their more clones out there, how did Eggman make all of these clones, was it actually Metal Sonic and not Eggman who made them, so many questions were presented when Sonic Heroes first came out. A lot of fans tried to consider this as Sonic Adventure 3, just made really weird. Having said that it does fit the number line, seeing as your playing as a team of three. Then again, some fans consider Sonic 2006 as SA3… Trust me when I say I gagged a little while typing that line. Oddly enough I’m actually a positive fan of Sonic 2006. I’m just not positive enough to call it SA3. But moving on, I also felt that Shadow and Team Chaotix held the game together. If it was just Sonic and his crew I don’t think it would of gotten the hype it did. To end this little session, Sonic Heroes was a fun filled game, end of story. Not to mention that they threw in the title of the game several times during the cut scenes. I mean, we get it, it’s called Sonic Heroes.

Last final thought. If you can’t agree with the game being pretty cool, then you can at least agree that the music was pretty boss. I’ve always had a heart for the songs in each game. I believe they bring the magic to the overall scheme of things. They are catchy, lovable, and pretty darn awesome. At any rate, as much as this is a review, this is mostly my opinion on the game. Take it as you wish. I hope you enjoyed the read, regardless of your take on this game. Thanks for taking the time to view this, bye for now.