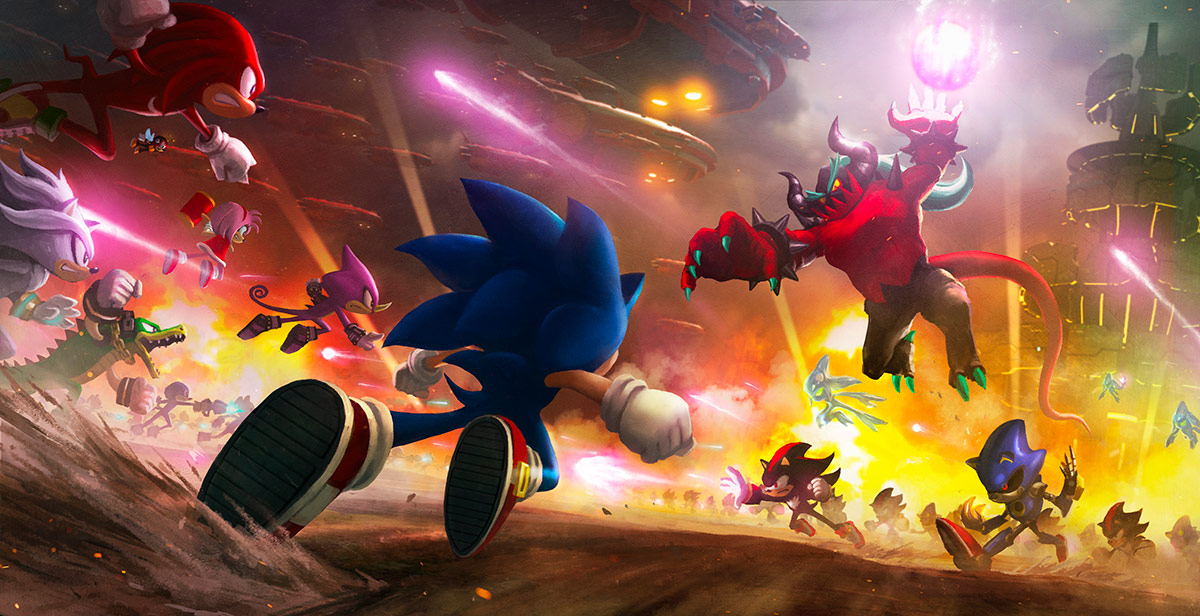 Sonic Forces makes a big gamble. What if Sonic were out of the picture for a lengthy amount of time? What would happen? The resistance is born with Knuckles at the helm and is stretched thin trying to defend from Eggman. Enter YOU! Can you help restore the world from Eggman’s clutches?

Modern Sonic’s gameplay will feel familiar if you’ve played Sonic Unleashed or Sonic Generations but not as polished. I experienced a lot of hiccups with loose controls, and erratic behavior. It never truly feels solid, especially in the 3D sections as like before, the game will alternate 3D and 2D.

Classic Sonic… This will again feel similar to Generations but somehow worse. If you’re expecting Sonic Mania physics, forget it. It’s not downright terrible but there is room for improvement.

The Avatar has a more unique gameplay style but it’s not too dissimilar from Modern Sonic. You have a similar homing attack and wispon, (wisp + weapon) and there are wisp power ups throughout the level that can refill your wisp power but you’ll need to hunt down for that specific power you have equipped. There are a lot of customization options but many will still find it too limiting. You can’t customize the color of the accessories for example. The avatar is the best component of the game. We might see more options in future patches/DLC.

The levels are short and the level design is lackluster. Most are usually 2-3 minutes if you know what you’re doing. Sometimes even less. I actually prefer shorter levels. I find it helps with replay ability but opinions here will vary. Many are derivatives of Green Hill, Chemical Plant and Death Egg, giving the impression that Sega is struggling with coming up with something different. There are 30 levels and it took me 4.3 hours to complete them AND the Episode Shadow addon. Take that as you will. More on Episode Shadow later.

There are 2 levels of difficulty. Normal and hard. Normal has a cap of 100 rings but each time you take damage, you lose 20 rings. Hard mode is like any other Sonic game. There is no ring cap and when you take damage, you lose all of your rings. Hard mode is really still very easy. There are infinite lives. Dying will only take you back to the last check point. The only real penalty is the timer is still going and that will affect your score/rank at the end.

As you progress through the game you unlock more accessories and wispons. You’ll be able to customize after each mission.

The music is ok overall with a lot of hit or miss. Some of it is good. Some is eh. Chances are you’ll like something from it. I find myself revisiting Aqua Road a lot.

Right off the bat as you speed through Green Hill Zone to respond to a distress call from Tails you’re treated to the cutscene that starts the main premise of the game off. That being: what would happen if Sonic were out of the picture? Sonic is attacked by old and new foes. Mostly old and a new sorely lacking in character, pompous “I am indeed the bad guy” called Infinite but we’ll get into that later. This is too much for Sonic and his butt is handed to him in a very one-sided fight. Unfortunately, we’re left with more questions than answers as the game takes a MASSIVE time leap into the future for 6 months. What did Tails do after that? What happened to Sonic right after? You’re left to fill in the gaps on your own.

You will not find an intricate story here. Sonic being captured to make way for new ground is an interesting premise but ultimately falls flat due to poor execution. The pacing feels off especially in the beginning. A lot of times you’re left with more questions than answers. Tails feels way out of character. He rescued Station Square from a missile back in Sonic Adventure and now he’s afraid to face Chaos 0? Perfect Chaos I could understand. A lot of the story unfolds through text dialog between characters before and after missions. Some of it is also through radio chatter during the levels a la Sonic Heroes but thankfully there’s an option to turn it off as once is enough.

Infinite is a horrible villain and not the least bit intriguing. He is very 1 dimensional, with a one-track mind and no character development.

Oddly enough, the chaos emeralds are not mentioned once throughout the game. (At least at the time of this writing!)

Episode Shadow is DLC which is thankfully free. There are 3 playable stages and Shadow plays similarly to Modern Sonic but with some minor tweaks. There is some more backstory of Infinite and a little SatAM reference in there too. The music here is also welcome with remixes of some of Sonic Adventure 2’s Shadow levels such as White Jungle.

This is a game that will be mixed amongst fans. This is NOT the best game since SA2. Don’t expect that. This is also not a dumpster fire of Sonic 06 or Sonic Boom. This is somewhere in the middle. I’m not placing a review score because we’ve never really done that before anyway and lol numbers. Bottom line is you may be best off waiting for this game to come down in price and then checking it out. Especially if you’ve been dying to get your custom character some screen time. Wait for it to be half off if you can. Right now, it’s not justifiable at its current price of $40 / £35.